A remote Amazon tribe has recorded its first case of coronavirus after a 15-year-old boy fell critically ill.

The teenager, who belongs to the Yanomami community along the Brazilian-Venezuelan border, is in intensive care with Covid-19 symptoms.

He was admitted to the General Hospital of Roraima, Brazil’s northernmost state, on April 3 suffering with shortness of breath, chest pain, a sore throat and fever. 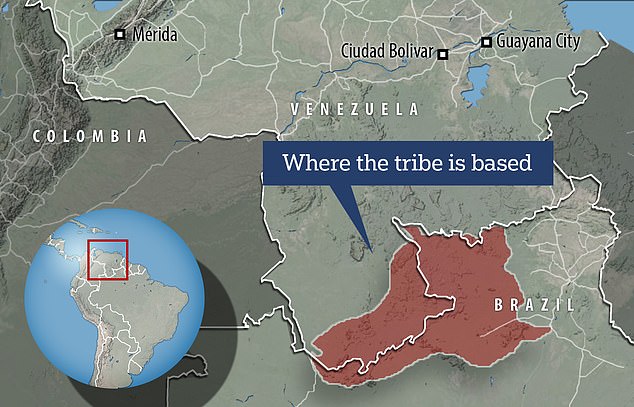 The Yanomami tribe is believed to be the largest indigenous people in Brazil and occupies over 200 villages across 2.3million acres on the Venezuelan border

The native initially tested negative, but fears of coronavirus were later confirmed in a second examination, according to the country’s Globo newspaper.

The Yanomami tribe is believed to be the largest indigenous people in Brazil and occupies over 200 villages across 2.3million acres.

They are a remote community, but it is reported that the boy, travelled back to his reserve on the banks of the Mucajaí River after his school classes were suspended to stem the tide of Brazil’s outbreak.

Seven tribesmen have now contracted the deadly virus across the Amazon states of Pará, Amazonas and Roraima.

Their infections have compounded fears among Brazil’s medical experts that the country’s indigenous communities face an unprecedented crisis. 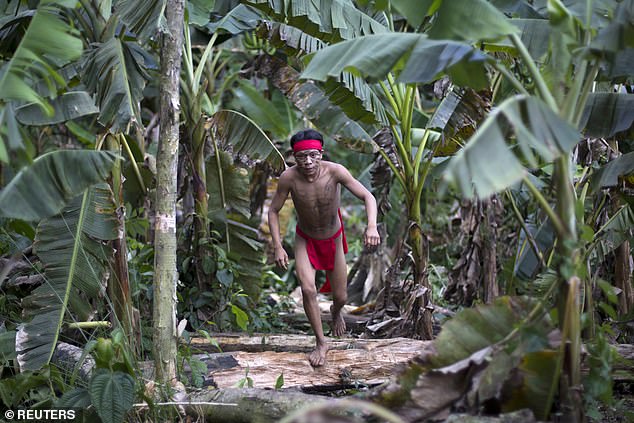 The teenager, who belongs to the Yanomami community scattered along the Brazilian-Venezuelan border, is in intensive care with Covid-19 symptoms. Pictured: A Yanomami tribesman in 2012

The community’s elders are most vulnerable to the lethal effects of the virus, and their deaths would strip the tribe of its highly valued wisdom and hierarchy which could unleash ‘chaos’ their structures.

To tackle the outbreak, members of some communities are breaking off into smaller groups equipped with hunting supplies to isolate themselves.

Federal University of São Paulo researcher Dr Sofia Mendonça told BBC News: ‘There is an incredible risk of the virus spreading across the native communities and wiping them out.

‘Everyone gets sick, and you lose all the old people, their wisdom and social organization. It’s chaos.’

Previous epidemics, such as the 1960s measles outbreaks which killed 9 per cent of the Yanomami tribe, have wreaked havoc on Brazil’s native population as they have not built up immunity and are not equipped with adequate medication.

President of the Federation of Indigenous Organizations of Rio Negro (Foirn) Marivelton Baré said some local communities are ‘in a panic’.

‘We’ll need to take the food to the villages so that they don’t expose themselves during this critical moment.’

Members of the communities have been told to use stop sharing eating utensils and to isolate those who have become infected with the bug.

Although the recorded cases in the tribes have so far been kept low, Brazil has more than 18,000 cases and 957 deaths.