A Brisbane real estate agency has urged its landlords to hike up rental prices by 20 per cent in a leaked memo to clients.

The email, sent by an employee at Ray White West End, recommended homeowners could push their rent up by more than double the current rate of inflation despite the country’s ongoing affordability crisis.

The agency believed it wasn’t providing landlords with the ‘information to make an informed decision’, and was seeing hikes of just $5 to $20 per week.

‘Our property managers have been reviewing all our lease renewals and on average recommending a 17 per cent rent increase on the leases renewed in October and November this year,’ the email said, as reported by The Guardian.

‘As we are planning December lease renewals, the average lease renewal recommendation is above 20 per cent. This can be as much as $10,000 per year in additional rental income.’

Australians paid an additional $7.1billion in rent over the past 12 months, with the average Australian spending $62 more per week or more than $3,000 per year.

The email claimed tenants were mostly ‘agreeable’ to the 20 per cent increase, saying they would believe it was ‘fair and reasonable’ once they reviewed the current market.

‘On average, apartments in West End/Highgate Hill/South Brisbane/Brisbane CBD are renting for one bedroom $480 to $520-plus [a week and for] two bedrooms $675 to $850-plus [a week],’ the leaked memo said.

‘If you are not achieving these rents (at a minimum), you should be asking why?’

Australians paid an additional $7.1billion in rent over the last 12 months, with the average Australian spending $62 more per week or more than $3,000 per year

Luke O’Kelly, the principal director at the Ray White branch, said the current rental crisis would only worsen if ‘investors lose confidence in the Brisbane housing market’.

‘Over the past 12 months, Brisbane has had some of the strongest population growth in the country and this has most clearly shown up in rental growth,’ he told The Guardian.

The Ray White director also said homeowners had been forced to pull properties out of the market due to population and floods.

‘It was therefore a relief that the state government recently pulled back on proposed changes to land tax which would’ve discouraged interstate investors,’ he said. 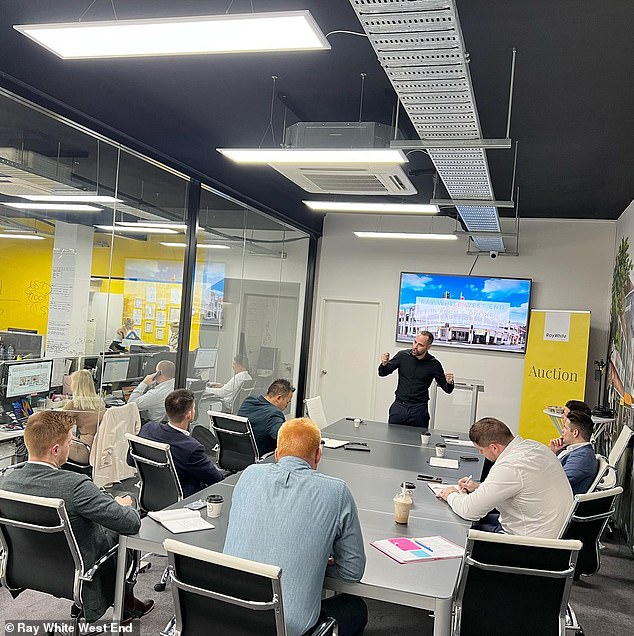 Luke O’Kelly, the principal director at the Brisbane branch, said the current rental crisis would only worsen if ‘investors lose confidence in the Brisbane housing market’ (stock image)

Ray White Queensland chief executive Jason Andrew told 4BC Radio the email had been sent by a ‘young property manager’.

Mr Andrew said while rent increases can ‘hurt’ tenants, he believed most would rather increases than having to move.

‘I think when tenants hear the entire story, that it can in certain circumstances cost $5,000 or $10,000 to move, there can occasionally be acceptance to rents going up,’ he said.

‘Rents don’t go up all that often. Many tenants would admit to the fact that it’s been five, six, seven years since their last increase.’

A spokesperson for The Greens said the federal government needed to intervene to help everyday Aussies.

‘It’s this sort of flagrant price-gouging that demonstrates exactly why we need a national two-year freeze on rent increases,’ housing and homelessness spokesperson Max Chandler-Mather said.