The anonymous senior administration official who published an op-ed and book detailing a resistance within the Trump White House was outed as a former Pentagon aide in a report published Monday.

Guy Snodgrass, a retired Navy commander who became chief speechwriter for former Defense Secretary James Mattis, was predicted to be the author behind a September 2018 New York Times op-ed and the new book ‘A Warning’, according to a New Republic writer.

‘No comment at this time,’ Snodgrass responded to Spinelli when he pressed him on whether he’s the anonymous author.

He also didn’t deny writing the book when he posted a link to the article on his Twitter page along with the caption, ‘The swirl continues…’

Guy Snodgrass (pictured), who served as former Defense Secretary Jim Mattis’s speechwriter, is predicted to be the anonymous author of The New York Times op-ed last year and recent book ‘A Warning’ 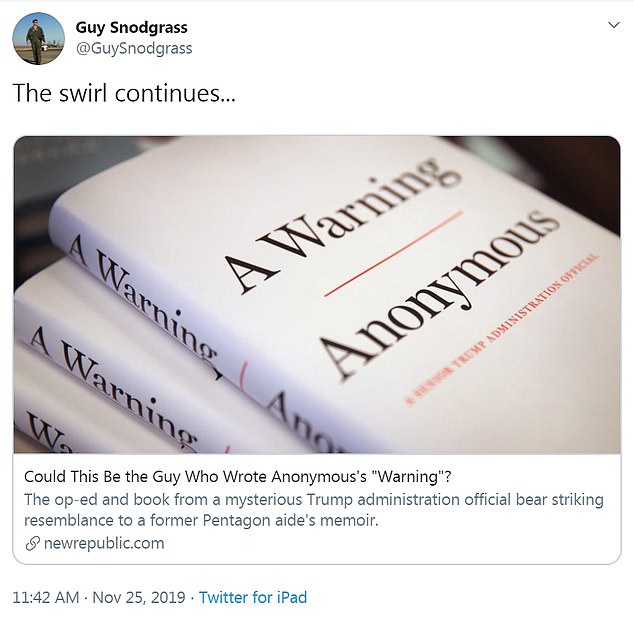 Snodgrass did not deny writing the op-ed and book. ‘No comment at this time,’ he responded when pressed by a Mother Jones reporter on whether he’s the anonymous author

Snodgrass wrote ‘Holding the Line: Inside Trump’s Pentagon with Secretary Mattis’, which he published along with his name at the end of October. This has prompted some Twitter users to question how Snodgrass was able to successfully write two books at the same time, if he in fact authored the anonymous expose.

While speaking to Fox News’ Trace Gallagher on The New Republic shortly after the report broke, Snodgrass didn’t deny the claim.

‘I have a book out right now with my name on it called, ‘Holding the Line.’ I do appreciate that The New Republic said that the writing was excellent across both books that’s a great sales pitch, but I’ll tell you what if I were going to make a sales pitch like that, I would do it right. I would come in the studio with you there in New York City,’ he said in the interview, which he joined as a remote guest.

‘What I’m saying is I just heard this reporting as I was coming over to the studio,’ he continued. ‘I got invited to talk about national security and… there is a lot to talk about there.’

He did, however, plant some doubt that he is the author when Gallagher pointed out allegations that the linguistics of the book are similar.

‘If you go through ‘Holding the Line,’ I didn’t use lodestar a single time. So already, the analysis may be breaking down just a little bit on you,’ Snodgrass said.

The New Republic report points to similarities in Snodgrass’s book and ‘A Warning’ as one reason it could have been authored by the same person. 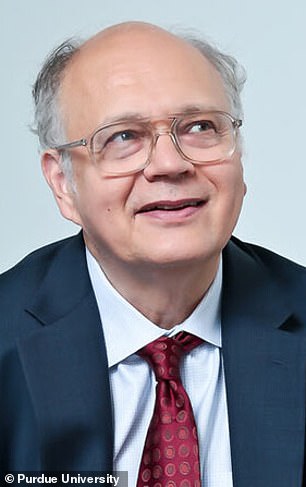 David Kusnet, former President Bill Clinton’s speechwriter and author of the New Republic report, said, ‘A Warning’ and the original op-ed both read like they were written by a speechwriter,’ which led him to suspect a speechwriter somewhere within the administration.

He said, however, that reading Snodgrass’s novel ‘Holding the Line,’ was the final proof he needed to guess the author.

He pointed out the similarities in sentence and paragraph structure and unoriginal flow between the two books, including a quote from a historic figure at the start of each chapter in both books.

‘Many passages in the two books are remarkably similar,’ Kusnet detailed. ‘In particular, both books stress that, when briefed about international alliances, Trump derails discussions by griping about how allies are stiffing the United States.’

If the prediction is true, Snodgrass, serving in an apolitical position, behaved ethically when he wrote the unsigned op-ed and followed it up with a book.

In a New York Times op-ed last September, the anonymous author, described only as a ‘senior official’ in the Trump administration, presented him- or herself as one of the ‘adults in the room.’

‘Many of the senior officials in his own administration are working diligently from within to frustrate parts of his agenda and his worst inclinations,’ the author reassured readers concerned with the direction of the administration.

Snodgrass’s nondenial and Kusnet’s previous successful prediction at the anonymous author of Clinton-era book Primary Colors, indicates that this prediction could be correct.

Kusnet reviewed in the 1990s ‘Primary Colors,’ a roman à clef novel detailing Bill Clinton’s 1992 presidential campaign, which centers around allegations of his infidelity and impregnating an underage girl while on the campaign trail. 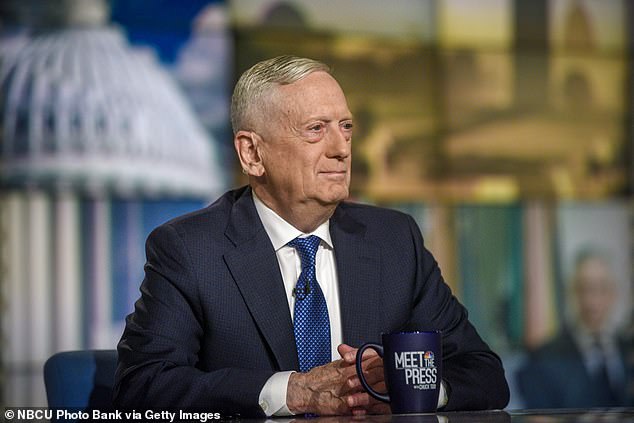 The tone of the book strayed from the op-ed in claiming the internal resistance wasn’t working, which could be indicative of the year difference where the administration lost Snodgrass’s boss Jim Mattis (pictured) and other administration officials 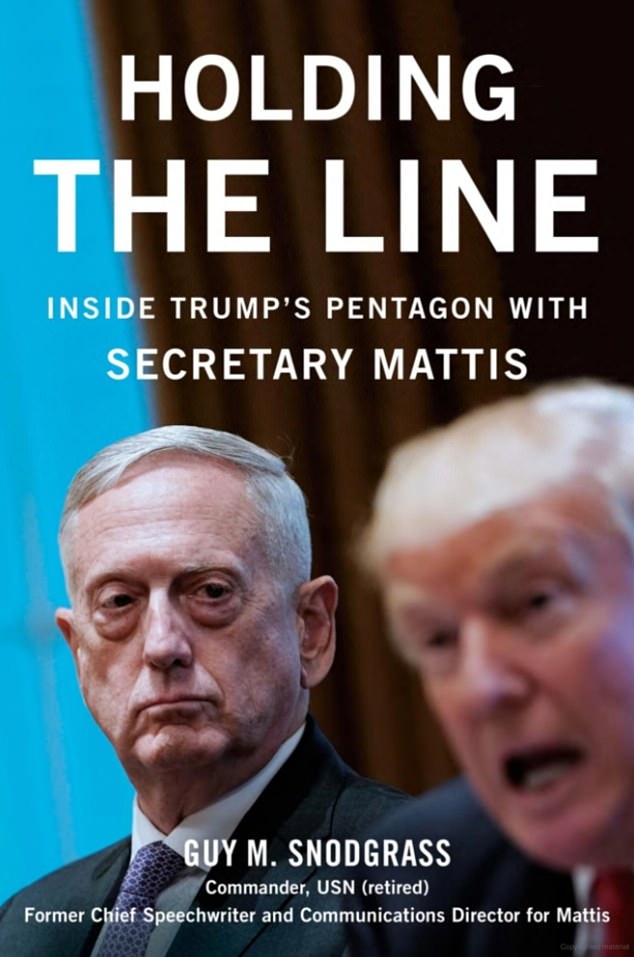 Snodgrass wrote ‘Holding the Line,’ which hit shelves in October with his name on the front  – prompting Twitter users to question how he could have written two books at the same time

‘I read the book carefully and couldn’t help noticing that it read just like Joe Klein’s pieces in Newsweek and, before that, New York magazine,’ Kusnet wrote, referencing the columnist who was later confirmed as the writer of the controversial novel.

Now, he could have successfully guessed the identity of this anonymous writer.

The book claims the author has changed tune since the anonymous op-ed last year – which, if the author is Snodgrass, could be contributed to Mattis, and other officials’ departure.

‘I was wrong about the ‘quiet resistance’ inside the Trump Administration,’ anonymous now admits. ‘Unelected bureaucrats and cabinet appointees were never going to steer Donald Trump in the right direction in the long run or refine his management style. He is who he is.’

Now that an impeachment inquiry is underway against Trump, lawmakers and others want to know the identity of the anonymous author since the book includes previously unpublished anecdotes about Trump’s potential violations against constitutional governance.

On Fox News Monday afternoon, Snodgrass was asked if the author’s identity should remain secret – he gave another non-answer.

‘You know I felt it was incredibly important to have the opportunity that I did to share my experience service alongside Secretary Mattis, what I witnessed as I served for a year and a half on his team and so that’s why I felt it was not only important to put that experience out so Americans could read and consider for themselves the facts, but also to put my name to it. That’s where I stand,’ he said.