Former Democratic presidential candidate Beto O’Rourke criticized the governor of his home state of Texas for reopening during the coronavirus only to be slapped down by Republican lawmakers.

O’Rourke’s criticism brought an immediate response from some Republicans in the state, including from GOP Senator Ted Cruz, whose seat O’Rourke tried to win in the 2018 midterm election. After failing to knock off Cruz, O’Rourke ran for the Democratic presidential nomination, a contest that he with drew from.

‘Is this the new Dem slogan?,’ Cruz tweeted back to him. 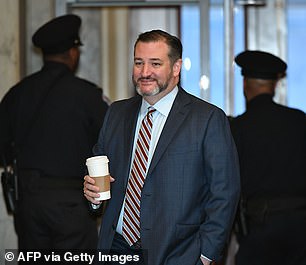 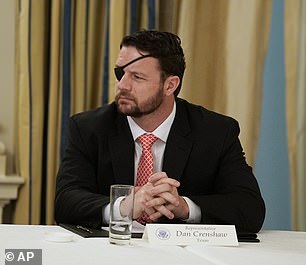 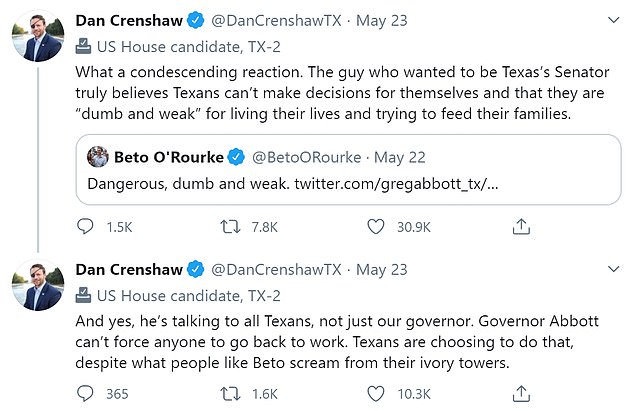 And Republican Congressman Dan Crenshaw, a prominent supporter of President Donald Trump, wrote of O’Rourke: ‘What a condescending reaction. The guy who wanted to be Texas’s Senator truly believes Texans can’t make decisions for themselves and that they are “dumb and weak” for living their lives and trying to feed their families.’

‘Governor Abbott can’t force anyone to go back to work. Texans are choosing to do that, despite what people like Beto scream from their ivory towers,’ Crenshaw added.

The Lone Star State is moving into phase two of its reopening process, which allows child care centers, massage and personal care spas and youth clubs to reopen May 18.

Additionally, bars, bowling alleys, bingo halls and other entertainment venues will be back on May 22 –  with restaurants at 50 percent of capacity.

Texas reported 1,060 more cases of the coronavirus Saturday, an increase of about 2% over the previous day, bringing the total number of known cases to 54,509. 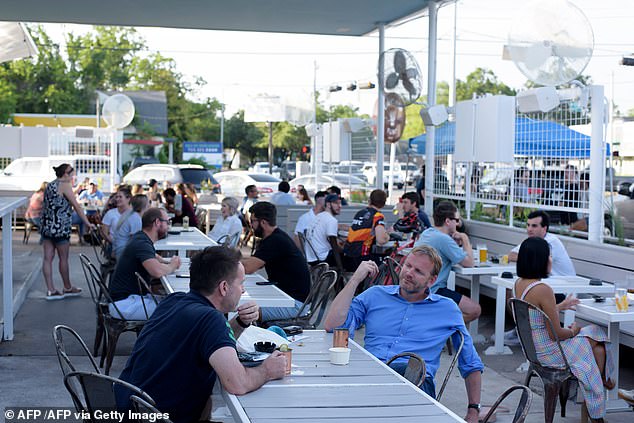 Customers sit outside on the patio at Eight Row Flint in Houston, Texas 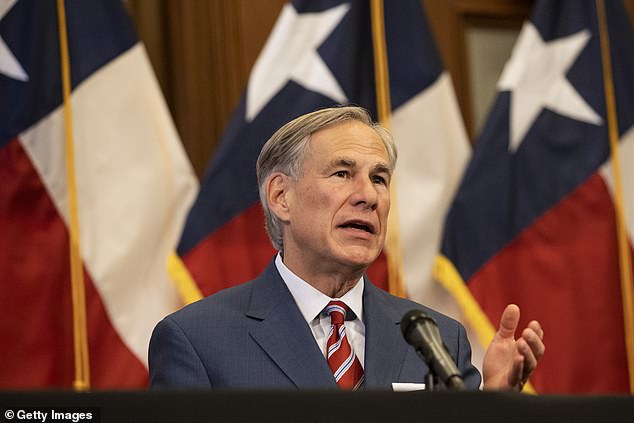 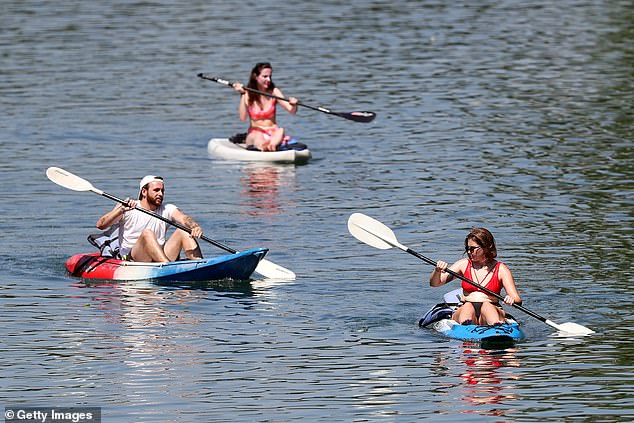 Texans swim and paddle in Barton Creek in Austin 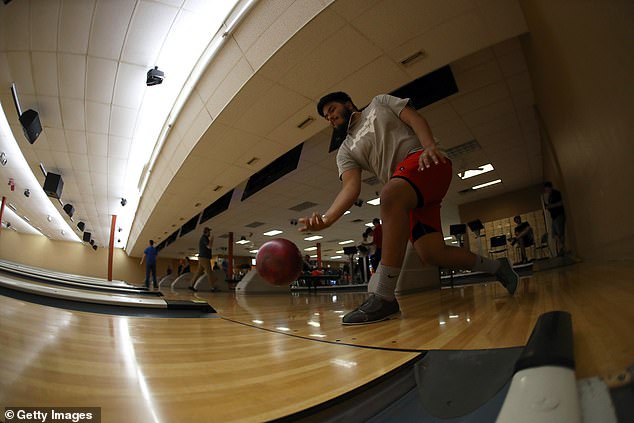 Bowling alleys have also reopened, as seen above at the Cowtown Bowling Palace in Fort Worth

Cruz has been a visible supporter of President Trump’s call for states to reopen and get their economies moving.

Earlier this month, the senator showed his support for the Dallas salon owner who was detained for two days for repeatedly defying stay-at-home orders by going to her shop to get a hair cut.

Cruz boasted about getting his hair cut at Salon A la Mode as he vocalized his staunch support of owner Shelley Luther and others wanting to make a living during the pandemic.

‘Shelley Luther was wrongly imprisoned when she refused to apologize for trying to make a living,’ Cruz said in Friday tweet. 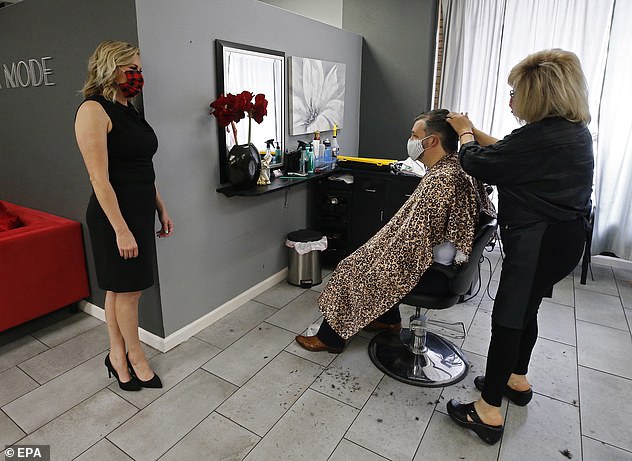 Senator Ted Cruz boasted about getting his hair cut at Salon A la Mode on Friday. Pictured with Shelly Luther (left), the salon owner, and a hair stylist cutting his hair (right)

‘Shelley Luther was wrongly imprisoned when she refused to apologize for trying to make a living,’ Cruz said in a tweet

‘Today, I went to get my hair cut at Shelley’s salon to show my support for her, her small business, and all business owners trying to safely help Texans get back to work.’

Cruz received his first hair cut in months at the salon but not by Luther. The salon owner stood to the side, but not within six feet of the senator and his stylist.

Cruz flew from Houston to Dallas to make the trip. It had been his first hair cut in three months.

‘I got on a plane and I flew up from Houston. I needed a haircut anyway. And I figured that there wasn’t a better place I could pick on the face of the planet to get a haircut this morning than right here,’ he told reporters, the Dallas Morning News reported. 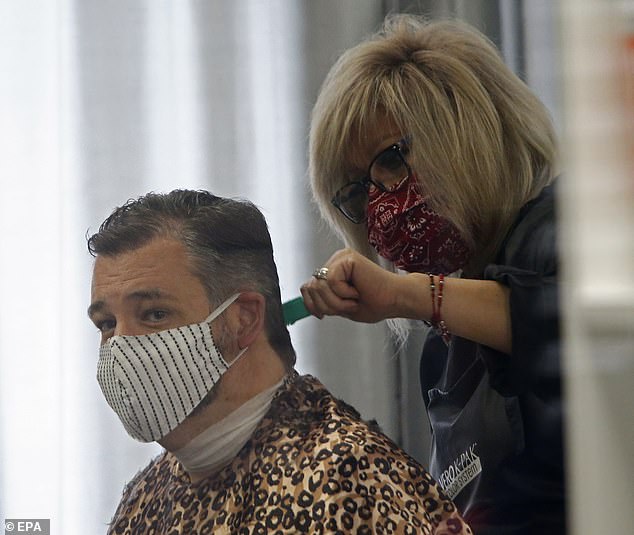 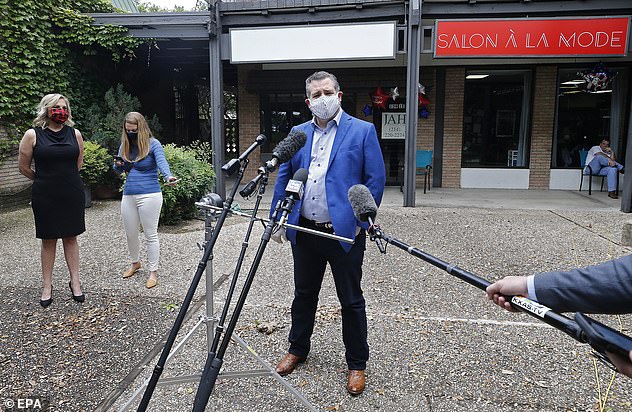 Cruz ignored questions about what would constitute as the appropriate punishment for those who violate public safety measures during the pandemic.

He also ignored questions about how measures could be effective in fighting the virus if people could determine they were voluntary.

Luther shared that Cruz had reached out to her family while she was behind bars.

‘It’s a nice gesture. His family actually called my boyfriend and prayed for him for 20 minutes while I was in jail,’ she said to CBS. ‘To me that’s not political… that’s just really nice people reaching out and making sure that our family is okay.’ 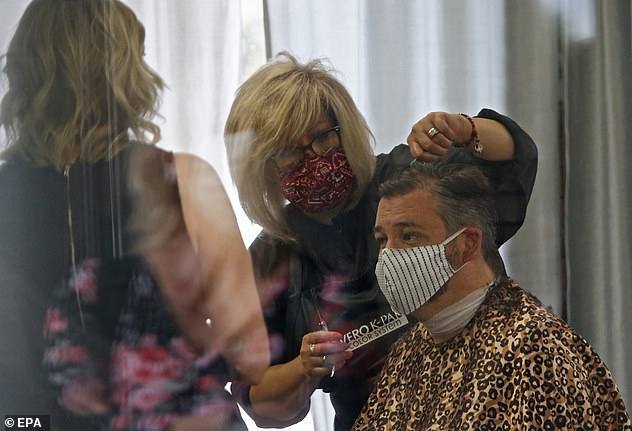 Cruz flew from Houston to Dallas to make the trip. It had been his first hair cut in three months 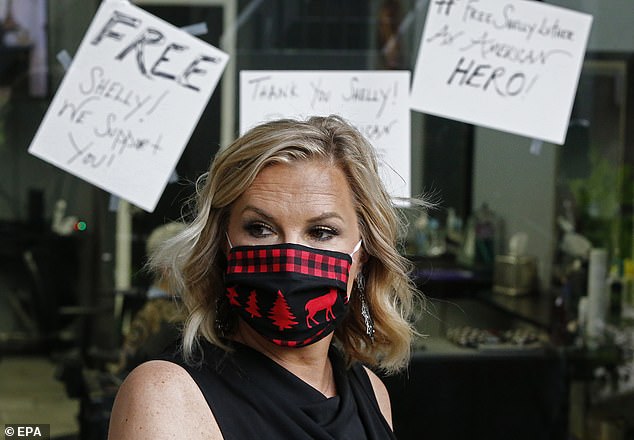 The owner of Salon A La Mode was sentenced to seven days in jail on Tuesday for refusing to shut down her business in accordance with the state’s stay-at-home orders.

District Judge Eric Moye, who handed down the sentence, had given Luther the option of avoiding jail if she apologized for what he described as her ‘selfish’ behavior, paid a fine and kept her doors closed until salon restrictions were lifted.

But Luther didn’t agree to those terms, and she told Hannity she stands by that decision.

‘That was the last thing I was going to do, honestly,’ she said. ‘I just couldn’t, I couldn’t bring myself to apologize.’