A new species of cockatoo has been discovered in Western Australia.

A large genetic study discovered the new subspecies of a red-tailed black cockatoo after mistaking it for an inland species.

Researchers from the Australian Museum, University of Sydney, CSIRO and the University of Edinburgh made the find in the Wheatbelt, east of Perth. 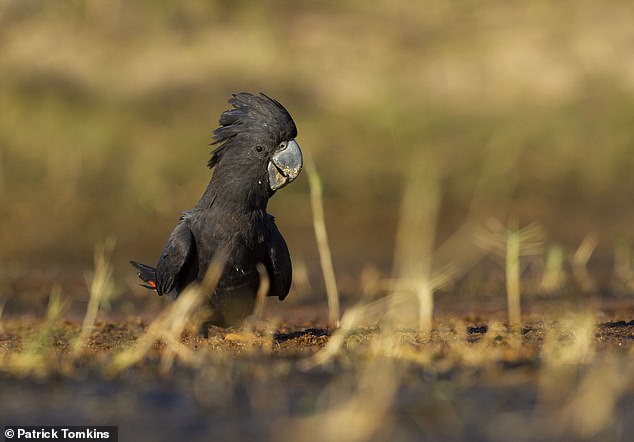 Researchers collected roadkill and cockatoo specimens from museums across Australia and found the new subspecies existed east of Perth, on the Wheatbelt (the Calyptorhynchus banksii macrorhynchus subspecies pictured)

Researcher Kyle Ewart said they knew the population was in the region but until now had assumed they were the same as the inland species.

But genetic testing showed the Western Australia red-tailed black cockatoo was more closely related to the forest red-tailed cockatoo than the inland species.

‘They have evolved to be similar because they both feed on the ground and live in similar arid and semi-arid habitats,’ Mr Ewart said.

‘Despite this similarity, an avian morphologist contributed his analysis which found specific features that can be used to distinguish (between them).’

As a result of the discovery the team had to give the subspecies a new classification.

The new classification is Calyptorhynchus banksii escondidus, which in part means ‘new’ and was chosen because the animal was ‘hidden in plain sight’. 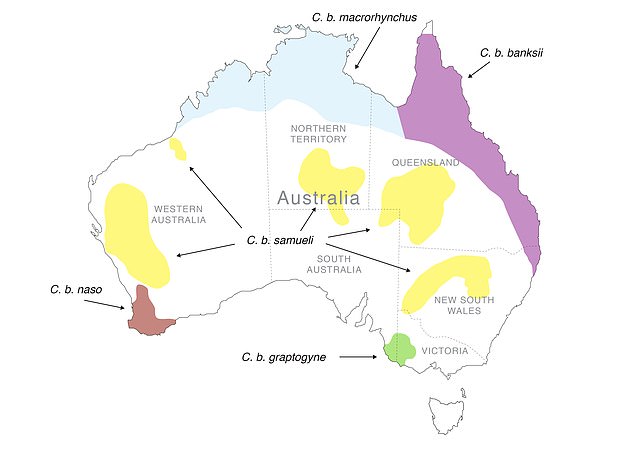 ‘We were able to extract a large amount of genetic data from these specimens, some of which were over 100 years old,’ Mr Ewart said.

‘Allowing us to investigate the relationships between the current subspecies.

‘This extensive genetic assessment of the red-tailed black-cockatoo has shed light on the species’ evolution, taxonomy and conservation.’

Those samples revealed the birds were genetically different to what researchers expected, which has put a priority on uncovering the protection needs of the animal.

Mr Ewart said they had to study the new subspecies in more detail because the discovery was an ‘important step’ in protecting the red-tailed black cockatoo.

‘We hope that this study can be used to inform conservation strategies to ensure the ongoing survival of this magnificent species,’ he said.

Common to mainland Australia, the red-tailed black-cockatoo is found in all mainland states.

Now with six subspecies occurring in eight discrete populations across the continent.

Have a range of suitable habitats including forests and woodlands dominated by eucalypts or casuarinas.

Meanwhile others are less restricted in the habitats they occupy. They also occur in some regional towns and cities.

Identified by largely black plumage and scarlet panels in the tail, at least in the males.

Females have yellow spots on the head, neck and wings, and orange-yellow barring on the breast and undertail.

Both sexes have dark brown eyes and brown-grey legs and feet; males have a dark grey bill, while the bill of the female is off-white.