A new analysis of DNA from the skeletal remains of ancient people in southeastern Europe has revealed new insight on prehistoric migration patterns.

Researchers from the University of Wyoming say the findings add new information on what is already known about European territories during these times.

The study confirms the first migration happened during the Neolithic Period around 6,000 BCE, when farmers based in Anatolia moved to spread through Europe.

The second happened during the Bronze Age from 3,000 to 2,500 BCE, when people from the Eurasian steppe moved to Europe and replaced much of its population.

The paper, published in the journal Nature, confirmed that northern and western Europe’s first farmers passed through southeastern Europe to migrate to these areas.

‘Southeastern Europe continued to be a nexus between East and West, with intermittent genetic contact with the Steppe people up to 2,000 years before the migrations that replaced much of northern Europe’s population,’ the report said.

The migrating people shocked those who were already living in the area, according to the new report.

Researcher Iain Mathieson explained this, saying: ‘In some places, hunter-gatherers and incoming farmers seem to have mixed very quickly.

‘But, mostly, the two groups remained isolated, at least for the first few hundred years.

‘These hunter-gatherers had been living there for thousands of years, and it must have been quite a shock to have these new people show up – with a completely different lifestyle and appearance.’

Remains found in a cave located in Croatia were used for the study, providing ‘needed information on origin and background research,’ the analysis said.

The researchers discovered that before farmers made it to southeastern Europe, the region was home to groups of hunter-gatherers that had diverged. 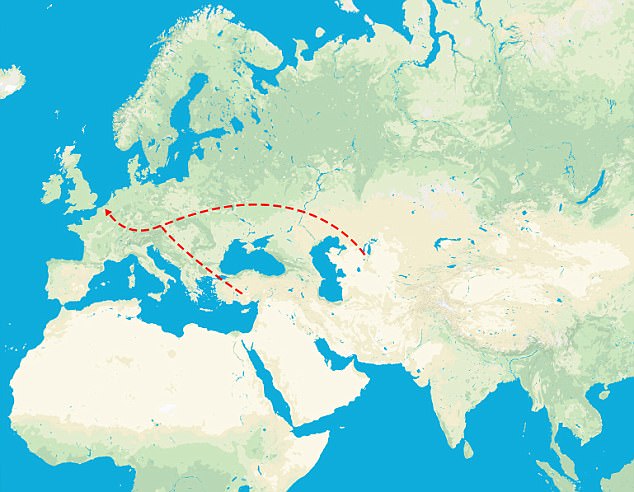 The first migration happened around 6,000 BCE, when farmers from Anatolia spread through Europe (southern path). The second happened from 3,000 to 2,500 BCE, when people from the Eurasian steppe moved to Europe and replaced much of its population (northern path)

The report explained: ‘This interaction continued after farming arrived. After the first appearance of agriculture in the mid-seventh millennium BC, farming spread westward.

‘Farming was established in both Iberia (Portugal and Spain) and central Europe by 5,600 BC.’

Ancient DNA studies have previously proven that the spread of the farming practice across Europe came alongside a large movement of a group closely related to farmers from Antaolia.

‘But, nearly all of the ancient DNA from Europe’s first farmers is from central and western Europe, with only three farmers reported from southeastern Europe,’ the report said.

WHAT DO SCIENTISTS KNOW ABOUT ANCIENT EUROPEAN MIGRATION?

A recent study from the Norwegian University of Science and Technology tracked migration into Norway.

The researchers found that Scandinavians came through Germany and Denmark to Norway about 11,500 years ago.

A second wave came from the northeast about 1,000 years later, traveling along present-day Norway’s west coast.

The two groups of people who migrated to Scandinavia during this time were ‘genetically distinct’, according to study author Mattias Jakobsson. 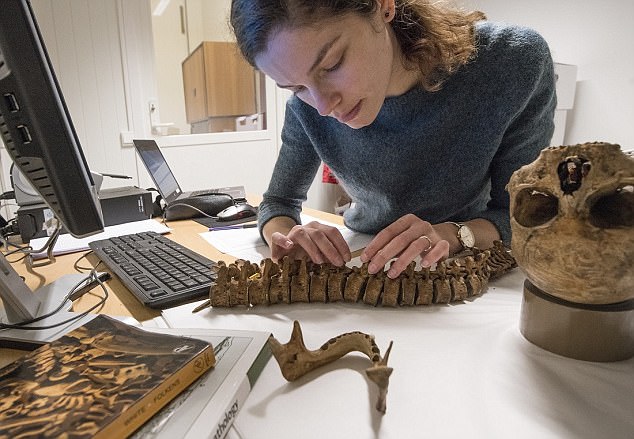 For a recent study from the Norwegian University of Science and Technology, researchers looked at the remains of seven individuals that had been excavated. Here, researcher Anne-Marian Snaaijer studies bone samples

For the study, Norwegian and Swedish researchers analyzed DNA samples from the Norwegian coast and Swedish islands Stora Karlsö and Gotland.

Scandinavia was among the last regions of Europe that became habitable.

This happened after glaciers gave way to the land 10,000 years ago. At that point, the area attracted hunter-gatherers because of the ocean’s resources.

The study said: ‘The new immigrants that came from the northeast learned new boating and fishing skills to access marine resources, which offered their main source of food.

‘These researchers discovered that these immigrants also introduced new tools and innovative ways to produce them. This shift in material culture can now be linked to a particular migration wave.’

The researchers analyzed ancient DNA data that came from the skeletal remains of 225 individuals for the report.

The individuals lived between 12,000 and 500 BC, the report said, and they resided in southeastern Europe.

Researcher Ron Pinhasi spoke of the study’s significance, stating: ‘These results reveal the relationship between migrations, admixture and subsistence in this key region and show that, even within early European farmers, individuals differed in their ancestry, reflecting a dynamic mosaic of hunter-farmer inbreeding.’

Pinhasi’s team is calling for more work to be done to more fully develop what scientists know about European migration.

‘An important direction for future research will be to sample populations from the Bronze Age, Iron Age and Roman and medieval periods, and compare them to present-day populations to understand how these population transitions occurred,’ the report said.