By Sahar Mourad and Eliza Mcphee For Daily Mail Australia

A mystery man with a keyboard has lead residents at a packed Sydney high-rise in an impromptu concert from his balcony.

Video footage showed residents at The Aria Apartments on Lachlan St in Waterloo in Sydney’s inner city breaking into song on Tuesday afternoon.

Neighbours stood on their balconies singing along to a heartwarming rendition of Ed Sheeran’s ‘Photograph’.

The lyrics of the song perfectly matched the mood of many people as Australian’s are forced to follow strict coronavirus social-distancing restrictions.

‘You won’t ever be alone, wait for me to come home,’ they sang as the neighbours joined the mystery performer.

The child of the woman recording the video could be heard asking her mother ‘what are people doing’.

‘They are listening to music,’ she responds.

The video comes after footage emerged last month of residents at another apartment complex in Waterloo singing along to ‘I Still Call Australia Home’.

Neighbours stood on their balconies and joined in after an opera singer in the block started singing on March 24.

One of the residents who filmed the sing along said the man leading the group was a professional singer.

‘He did some warm ups yesterday and got a bit of a response, I guess that spurred him on to put on a performance tonight,’ he said on Reddit.

‘You couldn’t see it in the video but someone got a laser machine out, and plenty of people had their phones out with torches waving. It was awesome to see us all come together… while practicing social distancing.’ 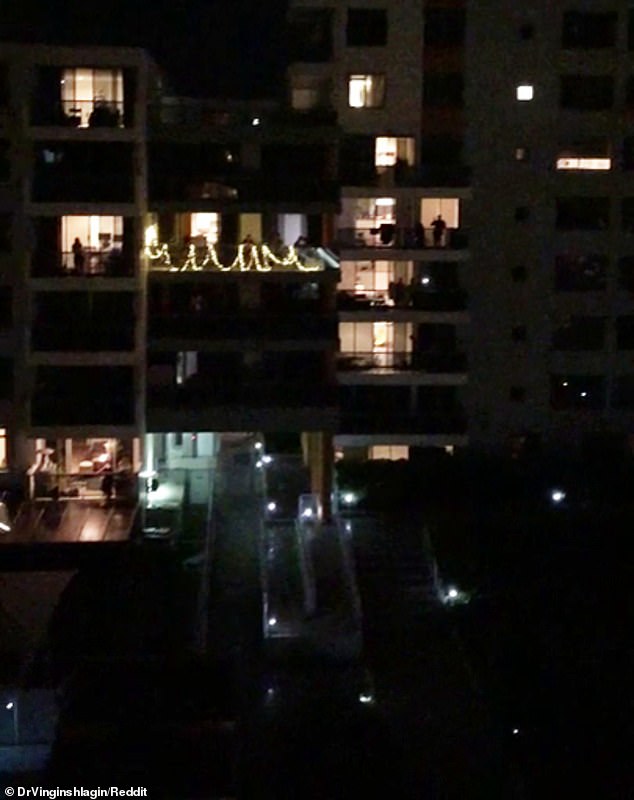 The video was flooded with responses with some saying it brought them to tears as many Australians are forced to self-isolate amid the outbreak of the virus.

‘You got the tingles, I got the tears…’ someone commented.

‘Phenomenal! got a bit emotional #straya,’ another wrote.

‘Amazing, i’m not even Australian and that gave me goosebumps,’ someone said.

‘That’s beautiful. Can you holler across we think he’s amazing? He deserves many beers when life is more normal again,’ another Reddit user said.

‘Thank you for sharing. First time this week I have cried happy-tears instead of stress-tears,’ one commented.

Similar incidences have been seen in Italy where residents played music and sang along to one another from their balconies after the country was placed into lockdown.

Videos circulated online with Italians singing and dancing as music flowed through their apartment blocks.

Similar moments have been captured in Lebanon, Spain, Denmark and China.