Terrified residents called in the RSPCA after spotting what they believed to be a red scorpion – only for an amused rescue worker to tell them it was a toy.

As fearful people cordoned off the street in Grantham, Lincolnshire, a woman called the charity’s 24-hour emergency hotline to report a sighting of a deadly arachnid.

Animal collection officer Paula Jones arrived at the scene to find it sealed off for the protection of people living in the surrounding area, where residents had been standing guard for two hours.

This red toy sparked fear in the Grantham street after a child reported the sighting of a scorpion to adults, who then stood outside their houses for two hours to observe it

But she was surprised to find her early morning call-out was in fact sparked by the sighting of a rubber toy.

She said it was sitting on the pavement in the same spot a child had seen it before reporting it to adults, who informed the RSPCA before checking.

‘We had a concerned lady get in touch with our 24-hour emergency hotline to report the scorpion to us and ask for help,’ she said.

‘She explained that a child had spotted the creature before they went to check.

‘I was dealing with another emergency elsewhere but headed over to Grantham as quickly as possible.

‘Some types of scorpions are highly venomous making them potentially very dangerous.

‘The callers were really concerned about the public’s safety so they used cones to cordon off the area and stood out in the street for two hours to ensure no one went near it.’

She said the rubber scorpion has since become a permanent fixture in her van after she and her colleague, Deputy Chief Inspector Becky Lowe, quickly realised there was no threat in the street on Thursday. 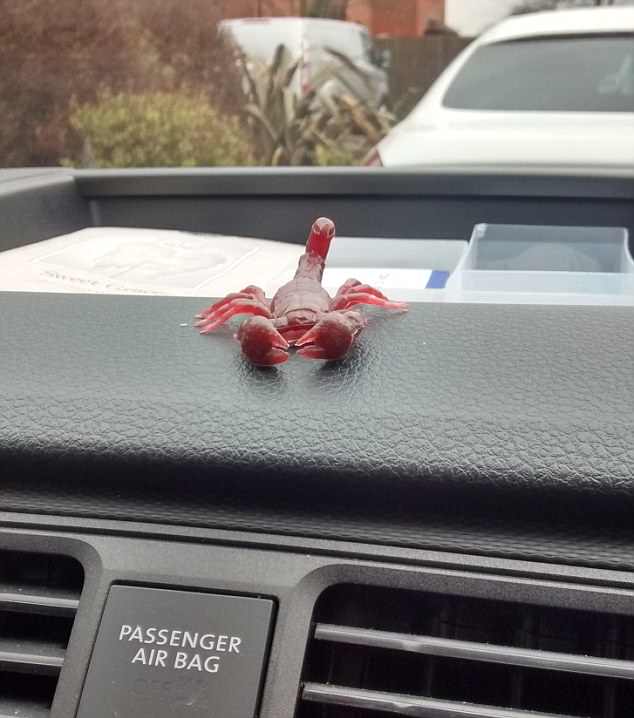 The toy has since become a permanent fixture in the RSPCA van, with the rescue workers naming it Cecil

‘It was quite funny after we realised it was a child’s toy and wouldn’t be a threat to anyone,’ she said. ‘But we really appreciate the concern of the woman and the efforts she went to.

‘Cecil the scorpion is now my van buddy and keeps me company on the road.’

The RSPCA receives numerous calls every year from members of the public who have found spiders, lizards or scorpions.

Often these animals have stowed away in a suitcase on holiday or in a delivery of fruit from abroad.

Anyone who comes across an exotic creature should get in touch with the charity’s 24-hour line by calling 0300 1234 999.

People are advised not to handle animals that are found, as they could be dangerous.