Restaurants and pubs report 13% fall in sales during second week of Eat Out to Help Out scheme compared to the previous seven days, figures show

Restaurants and pubs have reported a slight drop-off in sales during the second week of the Government’s Eat Out to Help Out scheme, it was revealed today.

Sales in the UK collectively fell by 13 per cent between August 10 and 12 compared with the same Monday to Wednesday period a week earlier, according to research.

The scheme offers 50 per cent off the bill for eat-in food and drink – up to £10 per person and excluding alcohol – on Mondays, Tuesdays and Wednesdays in August.

Other restaurant sales fell by 6 per cent, while sales at pubs and bars were down 20 per cent against the previous week of the taxpayer-funded £500million scheme.

Q&A: When is Eat Out to Help Out on and do I need a voucher?

When is it available?

It runs every Monday, Tuesday and Wednesday from August 3 to 31.

A 50 per cent discount when you eat in up to a maximum saving of £10 per diner. The business reclaims the value of the saving from government.

What establishments can take part?

No discount on alcoholic drinks or service charges.

Do I need a voucher?

No. The discount will be automatically applied by the participating outlet. The saving can be used alongside other offers and discounts.

How do I find participating outlets?

What about chain restaurants?

But sales were still significantly higher than trading before the initiative had started, with sales across all three areas up 30 per cent against the period two weeks earlier.

Fourth also said most firms using the scheme have reported sales figures inclusive of the Eat Out to Help Out discount and are therefore understating their total revenues.

The data, which analysed more than 700 companies across the sector, revealed that sales were up by 50 per cent between Monday August 3 and Wednesday August 5, against the previous week, highlighting a strong start to the initiative.

It said this showed a 70 per cent sales increase for restaurants, while pubs and quick-service restaurants rose by 26 per cent and 22 per cent respectively.

Fourth added that initial data ‘doesn’t indicate a drop-off in trade between Thursday and Sunday’ compared with the previous week, amid concerns the offer would impact other trading days.

For the second week of the initiative, operators also boosted their staffing levels to meet increased demand, reporting a 4 per cent increase in hours worked by staff against the previous week.

Sebastien Sepierre, managing director for Europe, Middle East and Africa at Fourth, said: ‘With uncertainty around consumer demand in the first week of the initiative, and some employees still furloughed, operators were understandably cautious with managing their staffing levels.

‘However, following the positive spike in trading during the first week, there has been an increase in the number of hours scheduled in the industry, which in turn will have a positive impact on the overall customer experience, which is crucial to ensuring the initiative generates a sustained positive impact for the industry.’

Separate data from reservation service OpenTable said restaurants have been more than a quarter busier than they were before lockdown on the back of the scheme.

It said that between Mondays and Wednesdays over the past two weeks restaurants have been on average 27 per cent fuller than they were on the same days of last year. 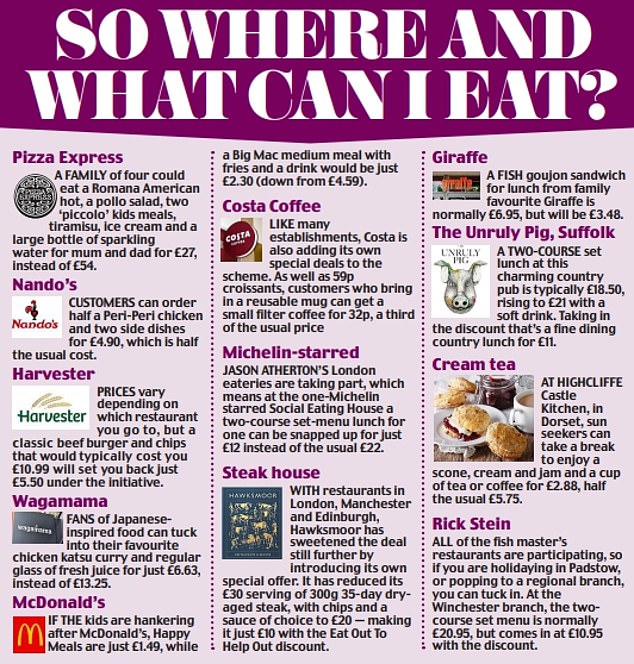 The promotion has led to a dip in customers from Thursdays to Sundays – but figures show trading throughout the week was almost boosted back to normal levels.

The Centre for Economics and Business Research hailed the deal for bringing a ‘much-needed boost towards normality’, coaxing Britons back into socialising.

The CEBR estimates that in Central London spending in restaurants, pubs and shops was down by £575million each month between March and June.

But this is set to recover slightly, falling by £178million in August – in part because of the scheme, which was launched by Chancellor Rishi Sunak.

Which chains and restaurant groups are registered for the Eat Out To Help Out scheme?