Retail sales claw back ground in January after Omicron slump

Retail sales claw back ground with DIY and fuel driving 1.9% increase in January after grim 4% pre-Christmas slump as Omicron swept the country

Retail sales clawed back ground last month with a 1.9 per cent rise after a grim slump due to Omicron before Christmas.

Volumes surged in January driven by DIY and fuel, following a 4 per cent dive in December that was even worse than thought.

The overall level is still higher than before the pandemic, but well below the peak in spring last year.

ONS director of economic statistics Darren Morgan said: ‘After a sluggish December where the Omicron wave had a significant impact, retail sales rebounded in January with their biggest monthly rise since the shops reopened last spring.

Volumes surged 1.9 per cent in January driven by DIY and fuel, following a 4 per cent dive in December that was even worse than thought

‘It was a good month for garden centres, department and household goods stores, with particularly strong trading for furniture and lighting.

‘Food sales fell below their pre-pandemic level for the first time, though, as more people returned to eating out and there was also anecdotal evidence suggesting higher demand for takeaways and meal-subscription kits.

‘Following a rise in high street footfall towards the end of the month, the proportion of online sales dropped to its lowest level since March 2020, while an increase in road traffic helped push fuel sales up from December.’

Helen Dickinson, Chief Executive of the British Retail Consortium, warned that prices are set to put pressure on consumers.

‘Despite falling consumer confidence, retail sales held up well in January as retailers went to great lengths to keep up the Christmas momentum,’ she said.

‘Falling Covid cases and the slow return to offices offer further hope for town and city centres that were hardest hit by the pandemic.

‘Yet, rising inflation means households may be preparing for future falls in disposable income, including from April’s National Insurance and energy price cap rises.

‘Retailers face similar challenges, with increases in transport and energy costs, global commodity prices and domestic wages. While retailers are going to great lengths to mitigate or absorb these cost increases, it is inevitable that prices will rise further in the future.’

‘This volume increase shows consumer keenness to spend and make up for the damper that Omicron put on Christmas.’

Petrol and diesel sales were up by 4.1 per cent in January as people returned to the roads following a fall of 5 per cent in December – when Omicron meant more home working. 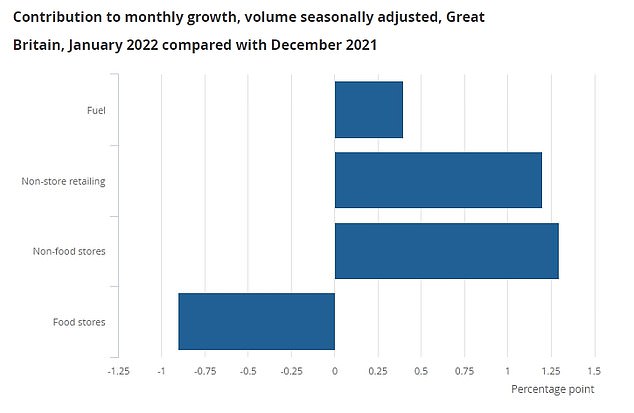 But volumes last month were still 3.3 per cent below those of February 2020.

Food stores volumes slipped under pre-Covid levels for the first time, and 0.8 per cent lower than February two years ago.

Online made up 25.3 per cent of overall sales in January, compared to a peak of 36.5 per cent in in February last year.

The the percentage is still higher than before the pandemic, when it was under 20 per cent.