Susan Pumford threatened to kill one of her neighbours after she was left ‘devastated’ by her brother’s suicide and the death of her husband, who she lost to cancer

A retired college lecturer hounded a young family out of their home with a vicious hate campaign in which she threatened: ‘I’ve got rid of 11 neighbours already – and I can get rid of you.’

Susan Pumford, 62, who lived alone, told Darrel Green she’d ‘smash his head in’ and subjected his girlfriend to foul-mouthed abuse daily after accusing them and their children of making too much noise when they moved in next door.

The elderly widow shouted through and banged on the adjoining walls of their terraced homes in Ramsbottom, Greater Manchester, threatening to vandalise Mr Green’s car after her brother’s suicide and husband’s death to cancer had a ‘shattering’ impact.

She even ‘put on’ the voices of her late mother, husband and brother to create spooky conversations between them, making it appear as if they were talking about him.

When Mr Green, 41, and his girlfriend Katie Murray, 38, threw a garden party to celebrate his birthday, Pumford emerged from her kitchen and shouted over the garden fence: ‘Would you all just f*** of?’

Pumford even threatened their Yorkshire Terrier for barking, saying: ‘I am going to get that dog and smash his f****** head in.’

Although police were repeatedly called out, officers said they powerless to do anything.

But after she threatened to kill Mr Green, Pumford was eventually arrested.

Due to the abuse Miss Murray split up with Mr Green and she moved out of their £130,000 in Callender Street with her two children.

Mr Green also moved out of the property with his daughter from a previous relationship but it is thought the couple managed to patch up their relationship.

In a statement to police, Mr Green said: ‘Susan’s behaviour was the reason my relationship broke down.

‘At times I didn’t want to go outside the house in case I saw her and thought she would continue her abuse.

‘We had never wronged her. We wanted to start afresh at this new house and we couldn’t because of her.’

At Manchester and Salford Magistrates’ Court, Pumford, who previously worked at Bury College, admitted harassment but escaped with a two-year conditional discharge.

She was also ordered to pay Mr Green £420 compensation and was banned from contacting him and Miss Murray under the terms of restraining order.

The court heard Pumford, who had been living in her house since 1985, began her campaign of abuse when Mr Green and Miss Murray where assembling furniture in their new home in October 2016.

The victims had been putting furniture together but stopped at 7pm when they heard banging and shouting coming through the wall from Pumford’s home which then carried on for most of the evening. 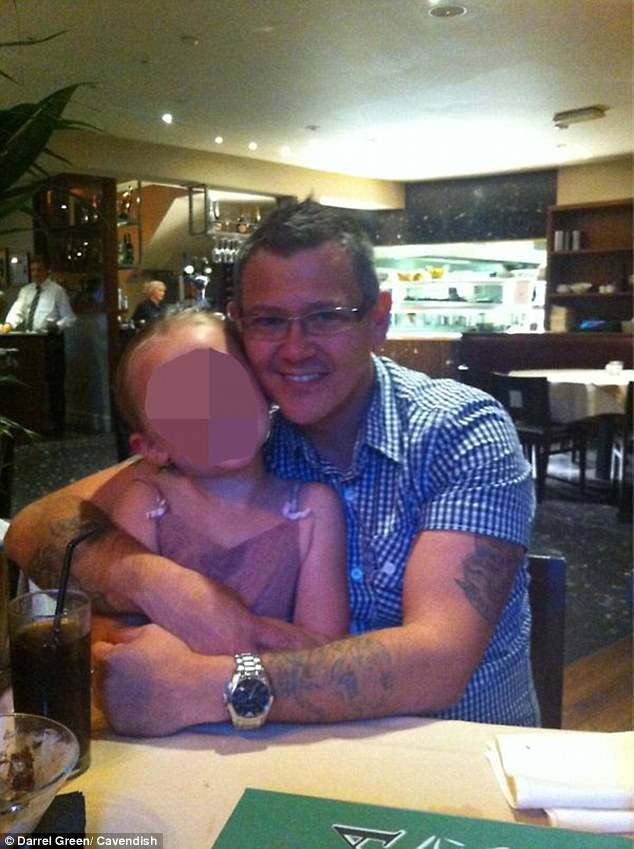 In his statement Mr Green said: ‘She was saying: “I got rid of 11 neighbours already and I can get rid of you.”

‘She was telling us we were being too loud so we stopped, but she continued to shout and bang on the wall.

‘Her behaviour continued each night from 6pm to 8pm as she continued her abuse.

‘We would always try to keep the noise down but she would continue to bang and shout.

‘The children struggled to sleep and were afraid. This continued up until January 6 this year – my birthday.

‘I was having a garden party with all my friends and family. Some smokers were stood outside in the back garden and I was stood talking to them.

‘Everyone left the party early at 9pm because of her behaviour.

‘After they left she continued to bang on the walls. Two days later we heard her shouting in the back garden.

‘We heard her speaking to the neighbour on the other side about us saying that we were disrupting her and that we needed to leave and she said that she wasn’t weak.’

‘Katie decided to confront her and something seemed to changed in Susan. She softened a bit and started to tell her about herself and her family. She said that her brother had hung himself and then her husband died of cancer.

‘We got into a conversation and I felt sorry for her and asked if we could start fresh. I saw she had a number of bin bags in her garden and offered to take them to the tip as a kind of peace offering. This offended her and Susan changed her mind and said: “I don’t need your f****** help.” 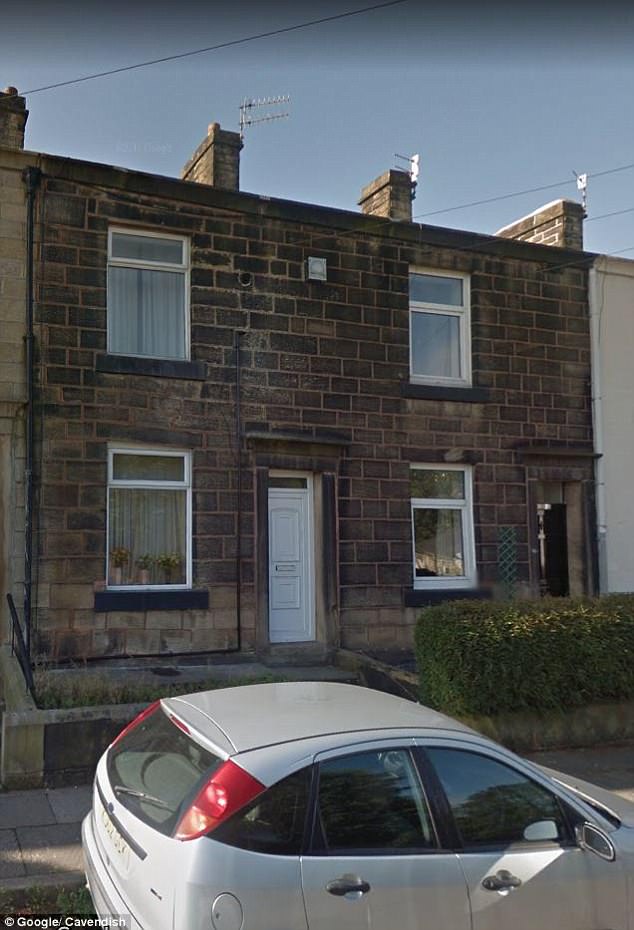 Pumford’s abuse started when the family were assembling furniture in their new home. The 62-year-old has since moved away from the area

‘She would tell them about us and how much she wanted us to leave. She was then talking to her brother as if she knew as I was listening.

‘She was saying “no wonder he hung himself – having to live with you” and I knew that was directed at me.

‘She then started shouting again and said: “Katie you’re a f****** plastic bag.”

‘Police came round but they said they couldn’t do anything because she hadn’t committed an offence.

‘They told us to log any further incidents but calling the police only seemed to make things worse.

‘I knew she was doing this on purpose to get us to move.

‘One night we heard items being smashed next door and I thought she was going to hurt herself.

‘We called the ambulance and when they arrived she refused to open the door. Her behaviour was getting worse and worse.

Because of Susan, Katie left me and my relationship broke down. She was concerned for the safety of the children. Susan continued to make threats to smash my car and head in.

‘I have a small dog and occasionally it would bark but Susan said: ‘I am going to get that dog and smash his f****** head in.”

‘She said she had tools in the house to do it with. Later she was shouting again saying: “If you ring the police I am going to smash your head in.”‘ 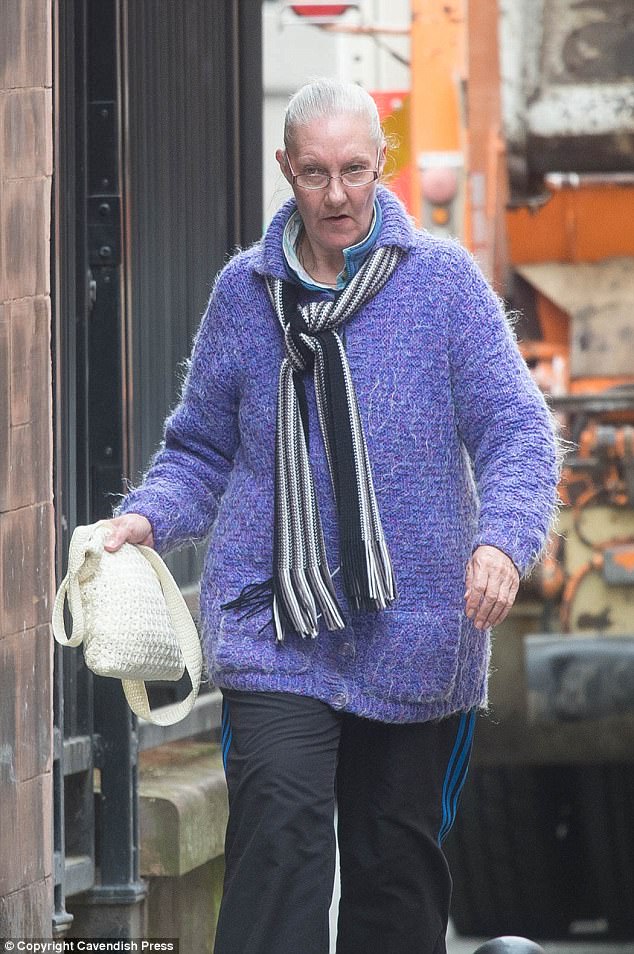 The widow was warned she should be receiving custody after her behaviour, but the court heard she was shattered when her brother hanged himself and husband died of cancer not long after

Prosecuting, Marion Nolan said: ‘A investigation has since shown that there are no mental health issues with the defendant.

‘When the police arrested her, the body cam showed that she was extremely difficult with the officers, and she wouldn’t go with them.’

The court heard Pumford now lives with her son in Haslingden, Lancashire.

Her lawyer David Abbott told the hearing: ‘Before this case she has never been before the court, and in my professional opinion, she never will again.

‘Her brother, whom she was very close with, killed himself in 2011 and not long after her husband died of cancer.

‘This had a shattering effect on her, was a massive change in her family situation and she was left in that house alone.

‘Obviously, a young family moved in next door and they were making noise, as they do.

‘She realises she reacted wrongly to the situation but she found it difficult to sleep because of the noise and often had to eat in a different room.

‘She doesn’t recall ever putting on voices. You have to know that they lived in terrace houses, and the walls were that thin that you could hear everything.

‘They were living in very close proximity to each other. She could hear everything and she found the noise intolerable.

‘She never intended to act in this way. She believed that she was in her own home, and she should be able to relax.

‘She accepts she reacted badly to the difficult situation and could have acted in a better way at the time. She regrets what she did. She really wants to express that to Mr Greene and his family. Mr Green’s relationship with Katie has recovered.’

Pumford was also ordered to pay £400 costs, with justice of the peace John Wood telling her: ‘You should be receiving custody for this. You clearly had a severe impact on Mr Greene’s life.’