Hundreds of dolled-up revellers have let loose in Darwin as they enjoyed a day at the races while the rest of the country endures further COVID-19 restrictions.

Life in the Northern Territory has almost returned to normal since restrictions eased on June 5, and just three active coronavirus cases remain.

The state has recorded just 34 cases in total, all related to international or interstate travel. No community transmission has yet been recorded.

Travellers who fly to the state from hotspots Victoria or Greater Sydney must spend 14 days of government-managed quarantine and pay the $2,500 fee themselves.

SUN’S OUT: Two young women dance on the grass with a bottle in hand during the Darwin Cup on Monday as the Northern Territory enjoys a life without coronavirus restrictions 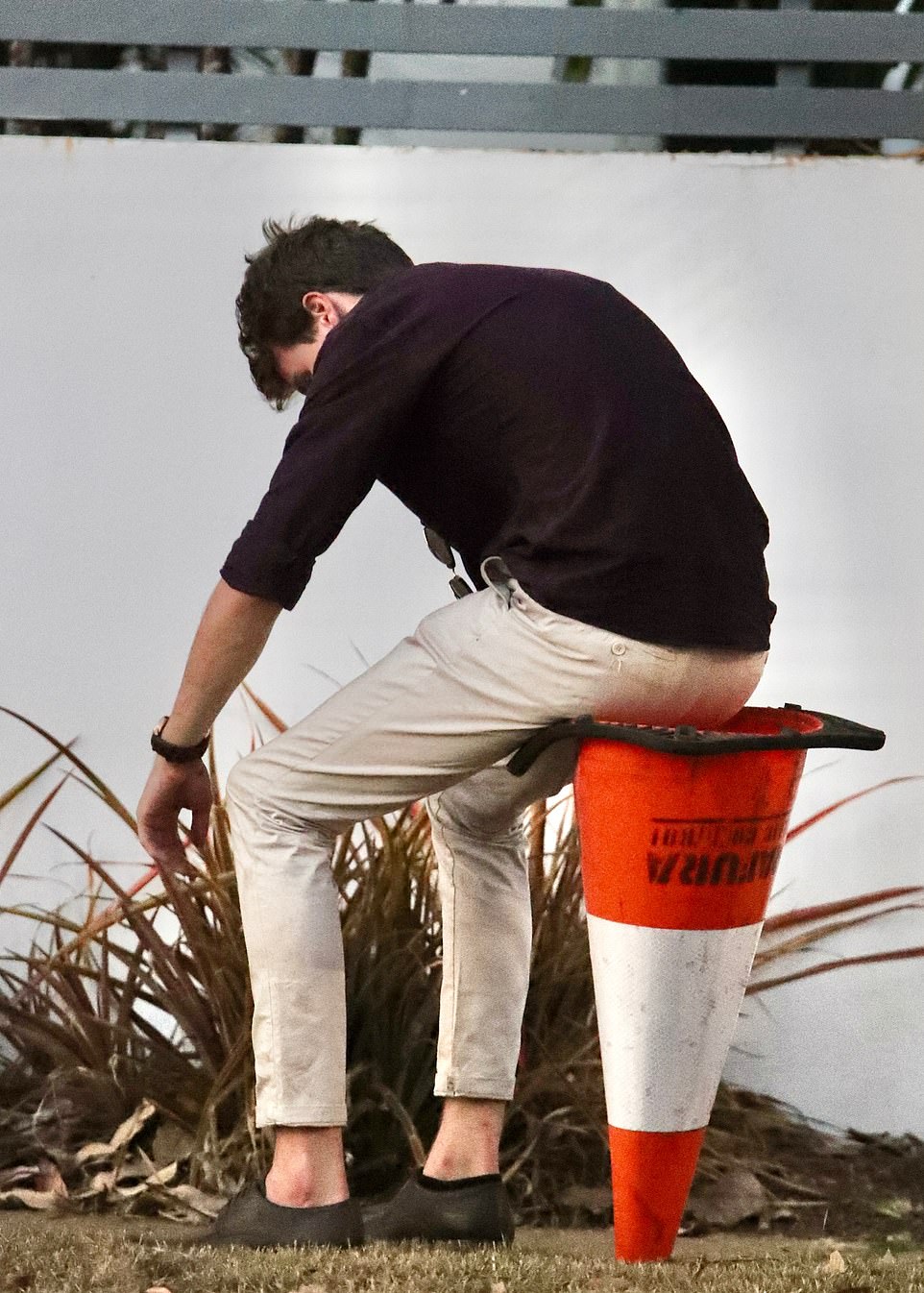 BALANCE IS KEY: A reveller is seen skillfully balancing on an upside down road cone as he waited for his mates at the races 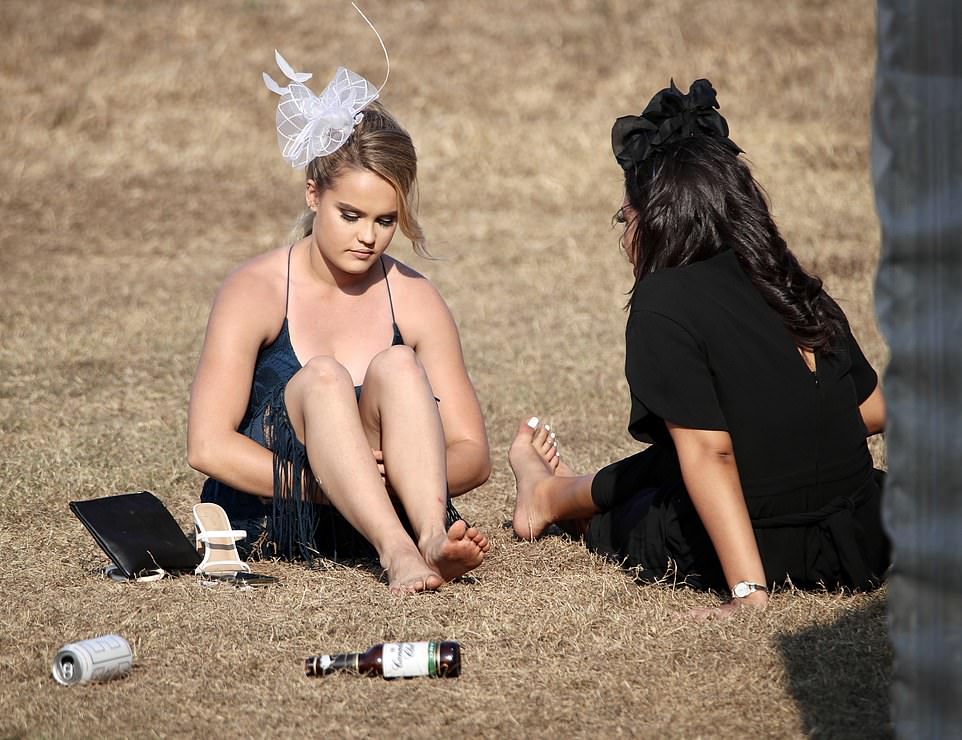 CARE FREE: A pair of young women chose to ditch their shoes as they chatted surrounded by empty beer bottles 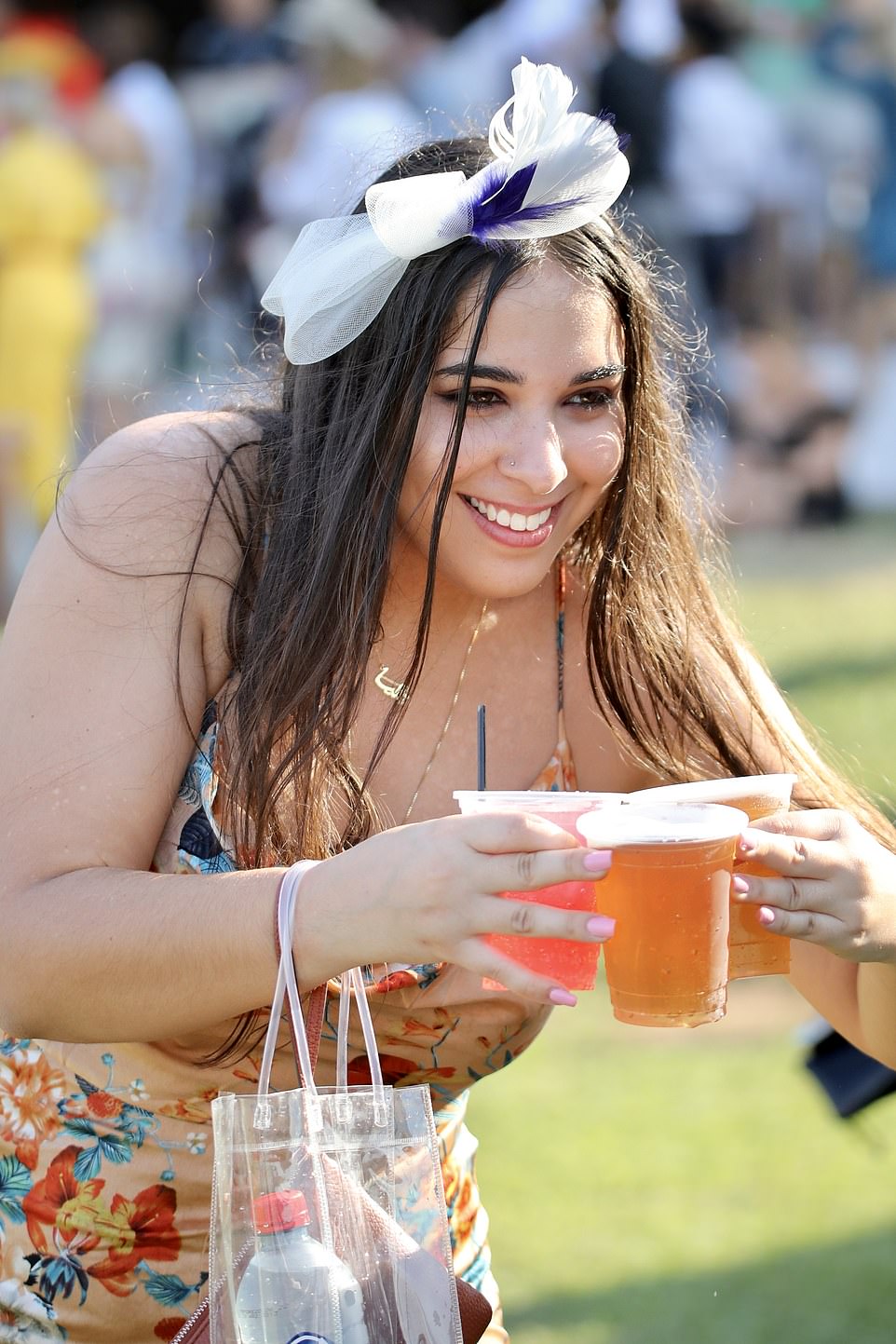 THIRSTY: A women in a floral dress smiles as she delivers drinks to her friends at the event on Monday in the Northern Territory 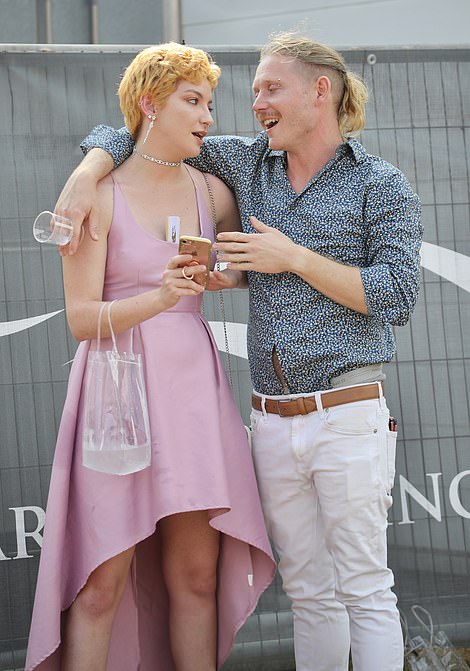 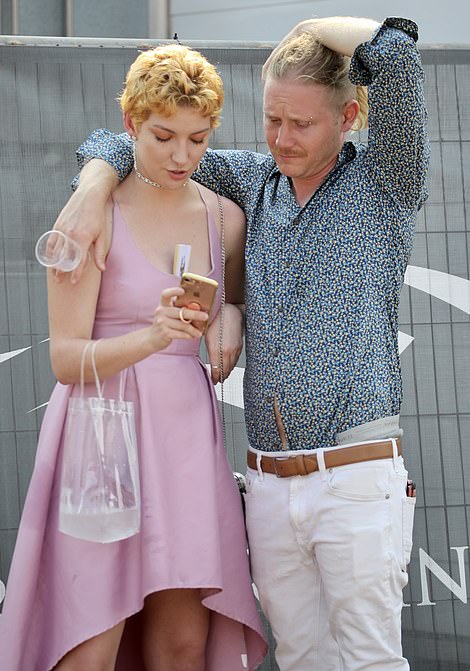 PRETTY IN PINK: A couple were snapped during a deep discussion during the event on Monday as revellers enjoyed the 30C heat

Having spent months locked off from the rest of the country, revellers were able to enjoy a sun-soaked day and despite the mercury soaring to 30C, many partygoers still managed to keep cool in brightly coloured dresses and strappy heels.

As the day went on revellers were in high spirits as they danced near the track, with two young women choosing to ditch their shoes as they chatted surrounded by empty beer bottles.

One glamorous racegoer in a bright dress covered in fruit was seen showing off her broken sunglasses, while women in fascinators were seen lounging on the grass as they sipped on champagne.

One bloke was even seen skillfully balancing on an upside down road cone as he waited for his mates.

The event was a reminder of what life was once life before the coronavirus pandemic.

Residents in NSW and Victoria can all but dream of similar events happening this year as both states continue to battle the virus.

NSW reported 12 new COVID-19 cases on Tuesday, with just one linked to hotel quarantine and others linked to clusters, or Victorian travellers. 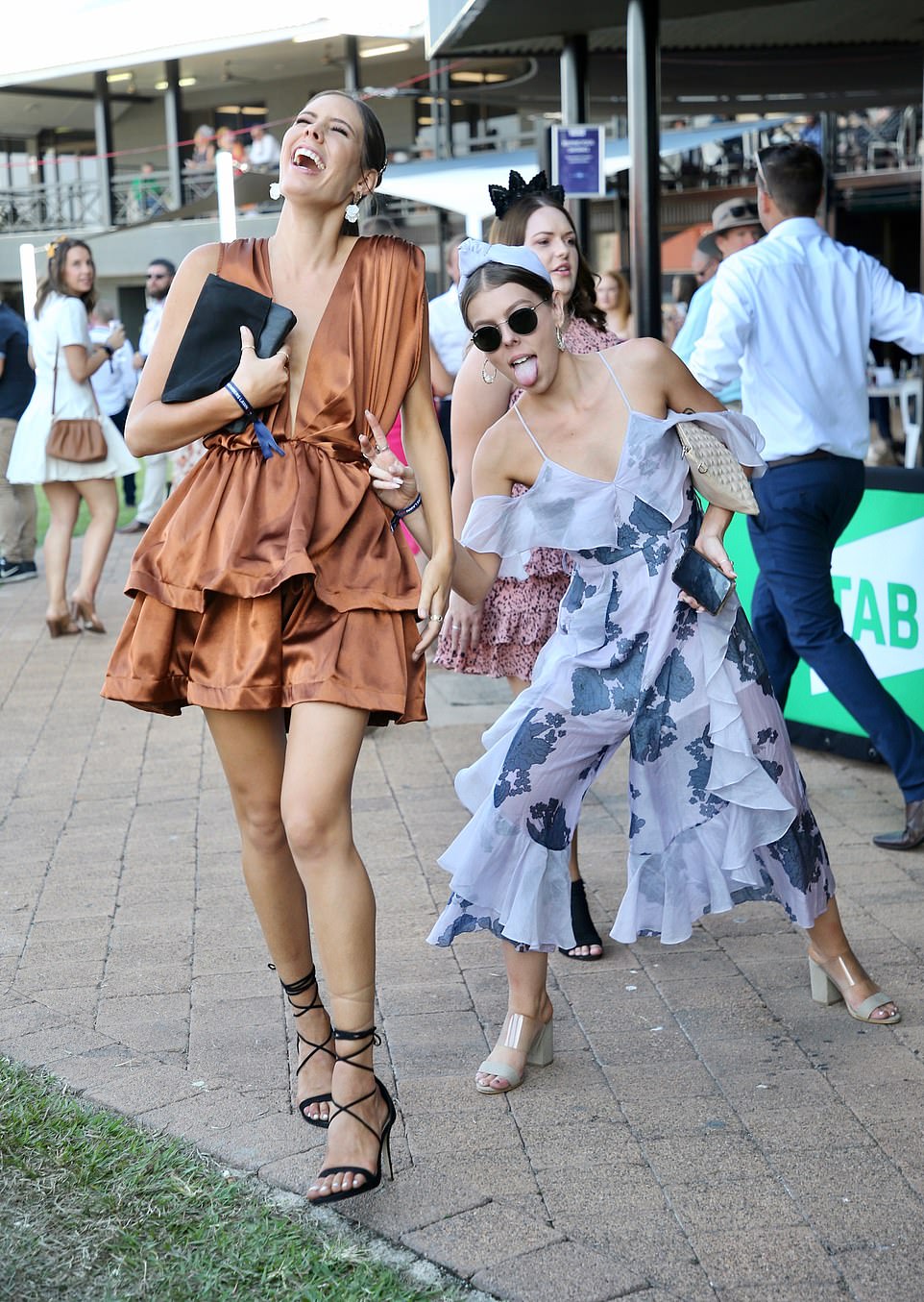 PEACE: Punters in pretty dresses are seen laughing as they pose for a photo after the event in Darwin on Monday afternoon 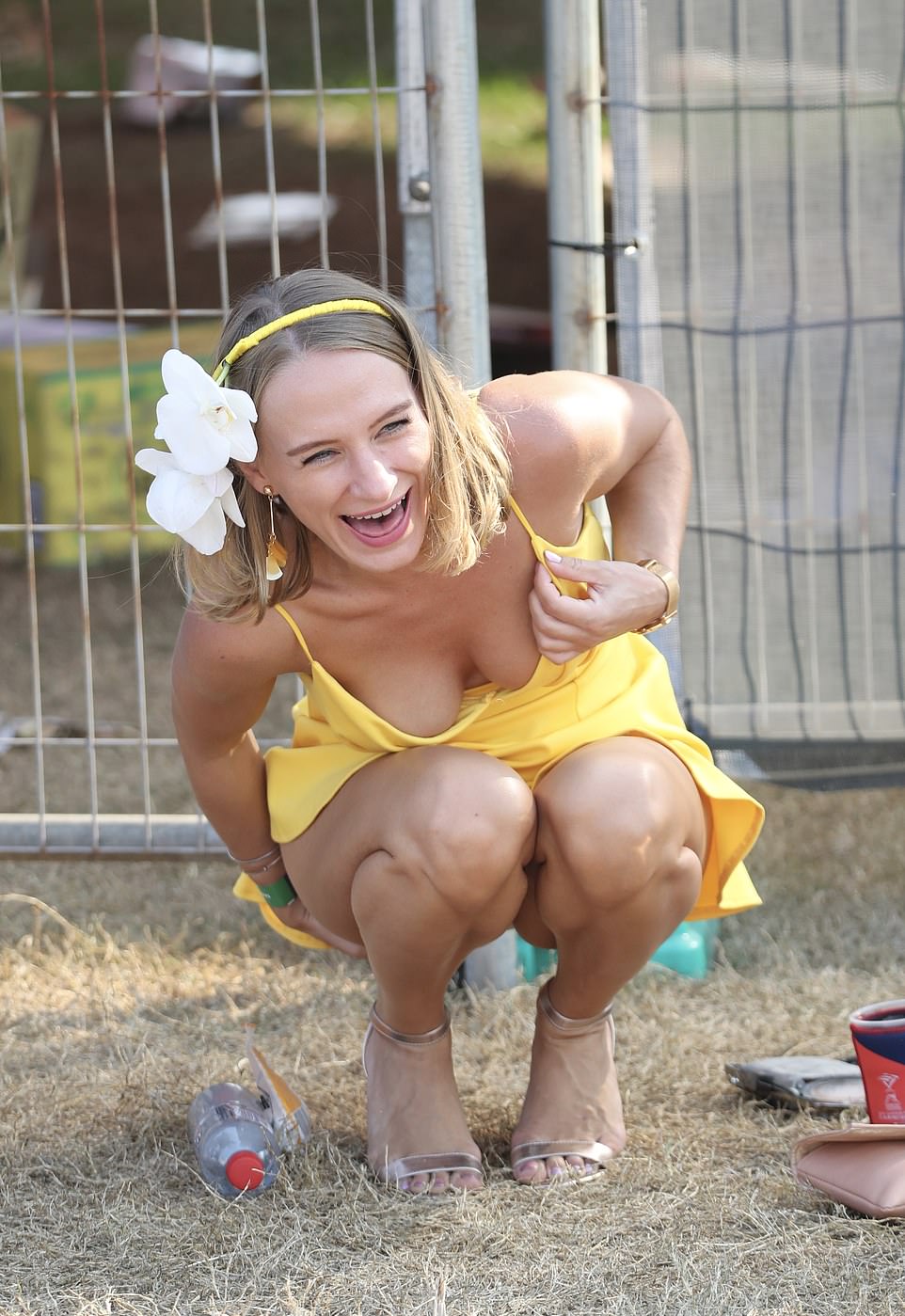 FUN IN THE SUN: A woman in a bright yellow dress, matching head piece laughs and gold sandals with her friends at the event 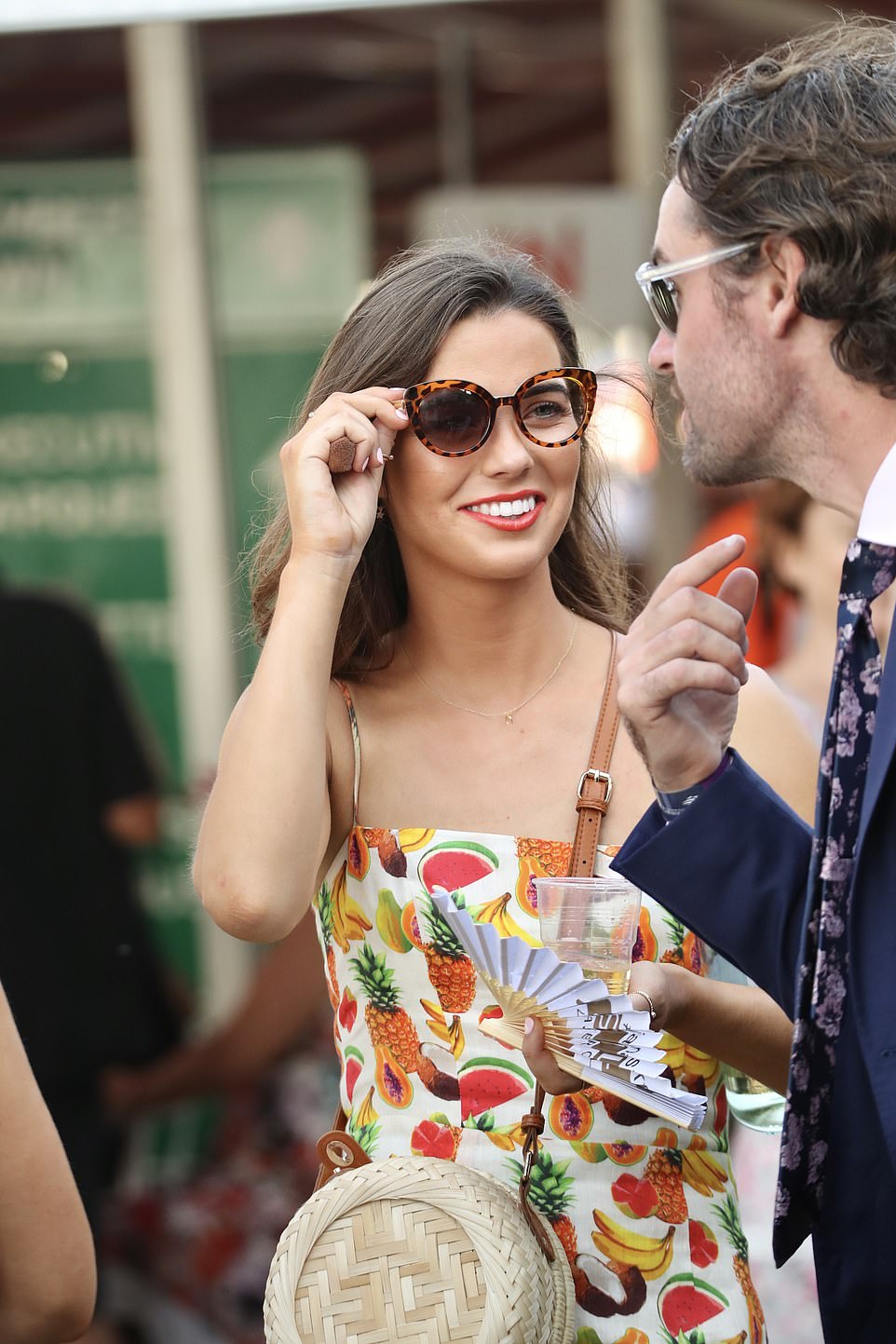 FASHION DISASTER: A woman in a fruit dress shows her friend her broken sunglasses and she holds a drink and fan in her other hand 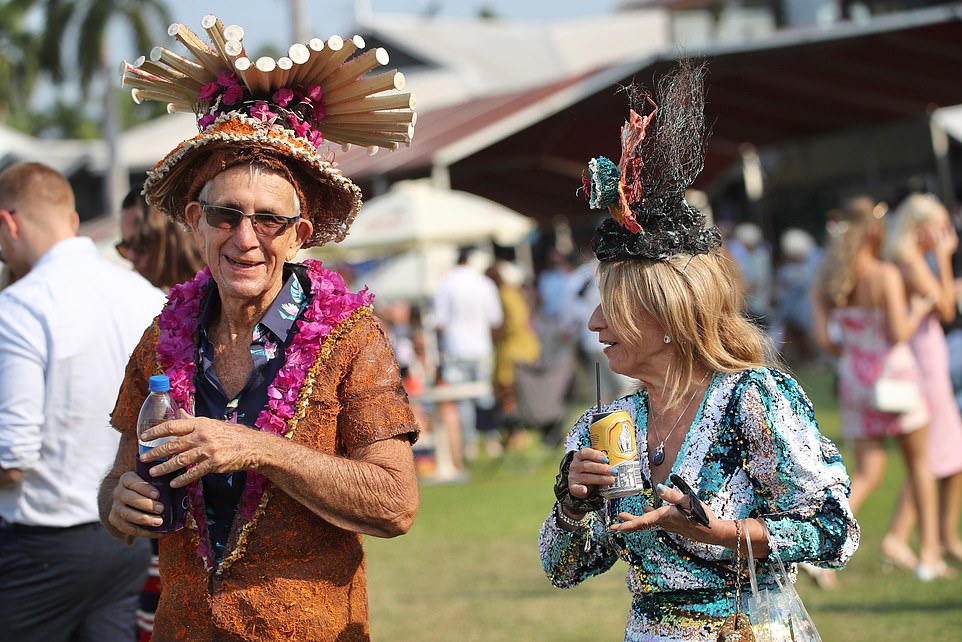 STYLE: A couple with stunning head wear enjoy a beverage at the event in Darwin on Monday, temperatures soared to a scorching 30C 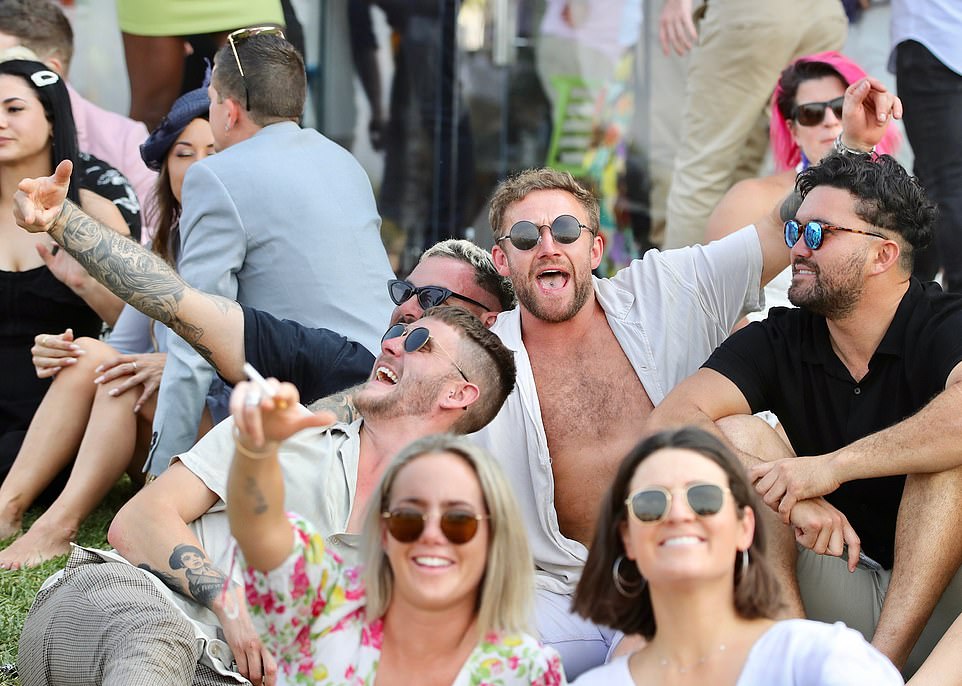 CHEERS LADS: A group of blokes in sunglasses sit closely together cheering as they enjoy the races on Monday in Darwin 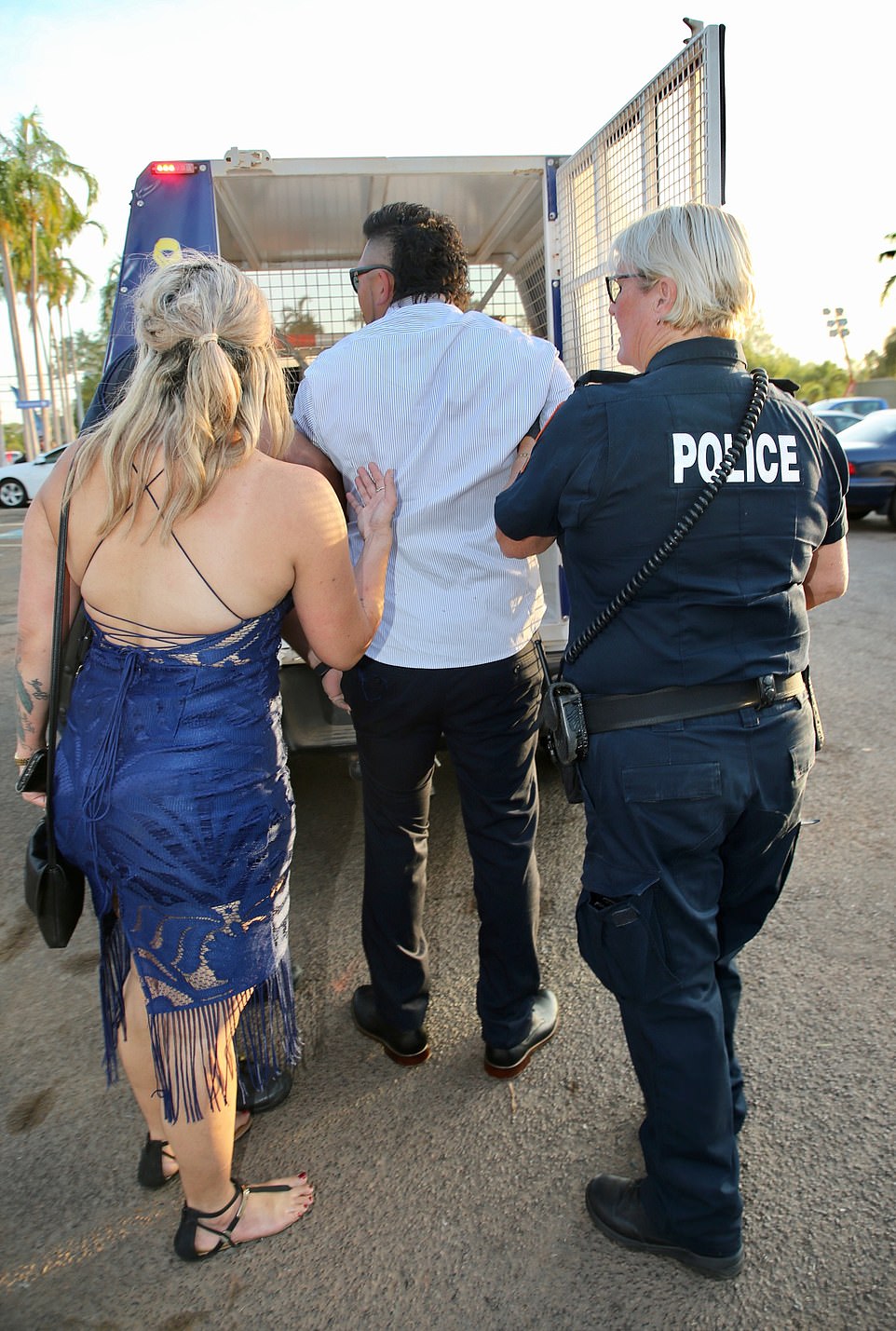 EARLY NIGHT: A man with a Mohawk is escorted away by police as a woman in a tight blue dress joins them

The state has been recording steady daily increases in virus cases in the low double digits.

It was a Victorian who brought the sickness over the border sparking the current New South Wales outbreak, and the border has now been firmly sealed.

As Victoria recorded 439 new cases and 11 deaths on Tuesday, stage four lockdown measures were underway, with 250,000 people out of work for at least the next six weeks.

The Victorian government hopes the drastic lockdowns, which include an 8pm to 5am curfew, will crush the infection spike derailing Australia’s recovery, which was once the envy of the world.

Premier Andrews has outlined a three-tiered system for workplaces, effective from Thursday, to complement the state’s six-week stage four lockdown.

‘There will be very significant pain,’ he said on Monday. 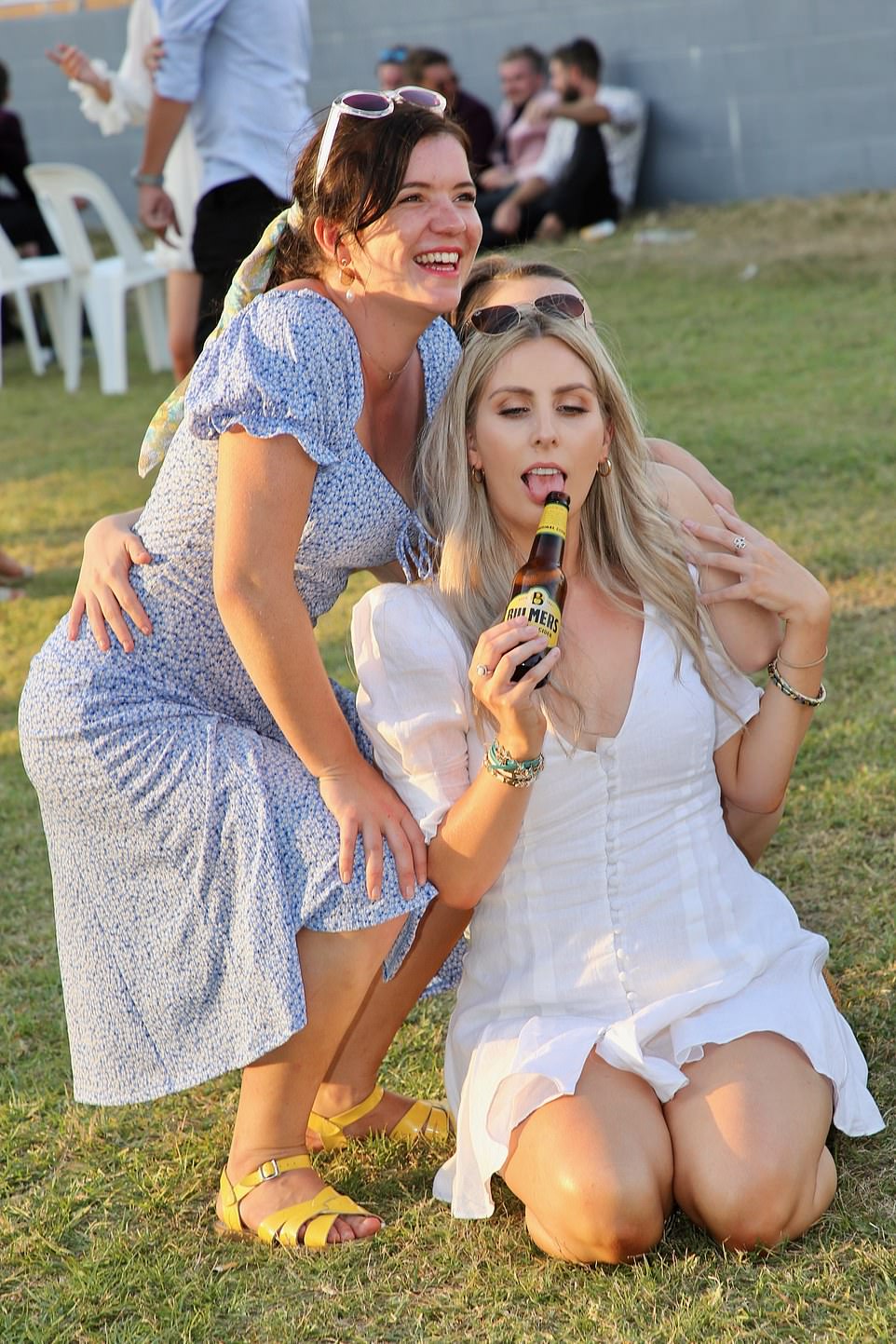 CHEESE: A woman attempts to drink from a bottle as her friends pose for a picture with her at the event 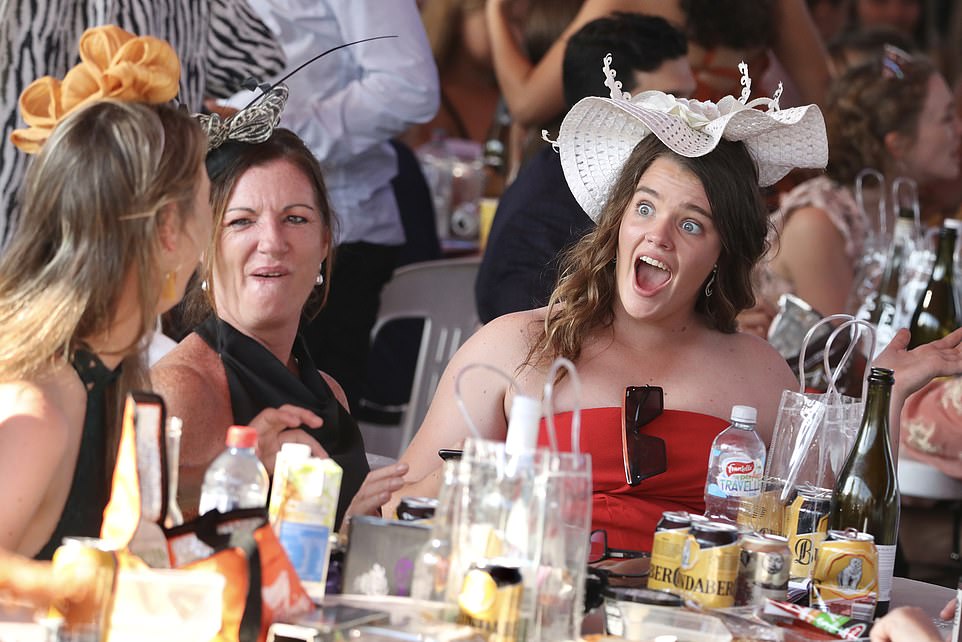 CORONA WHO? Revellers sit in groups at the event and enjoy drinks while the rest of the country continues to battle COVID-19 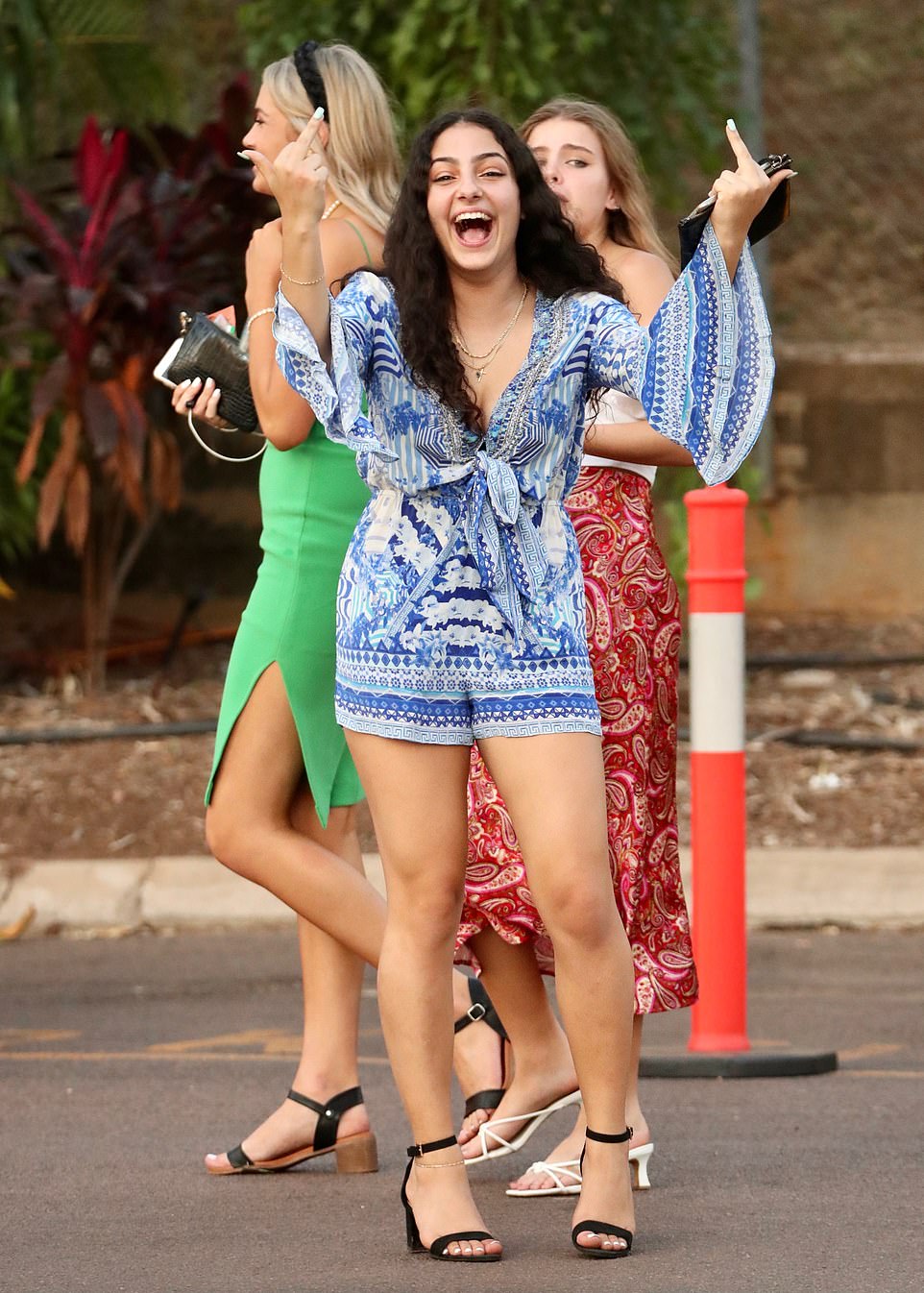 WILD TIMES: Partygoers pose for a picture as they leave the event in Darwin on Monday evening 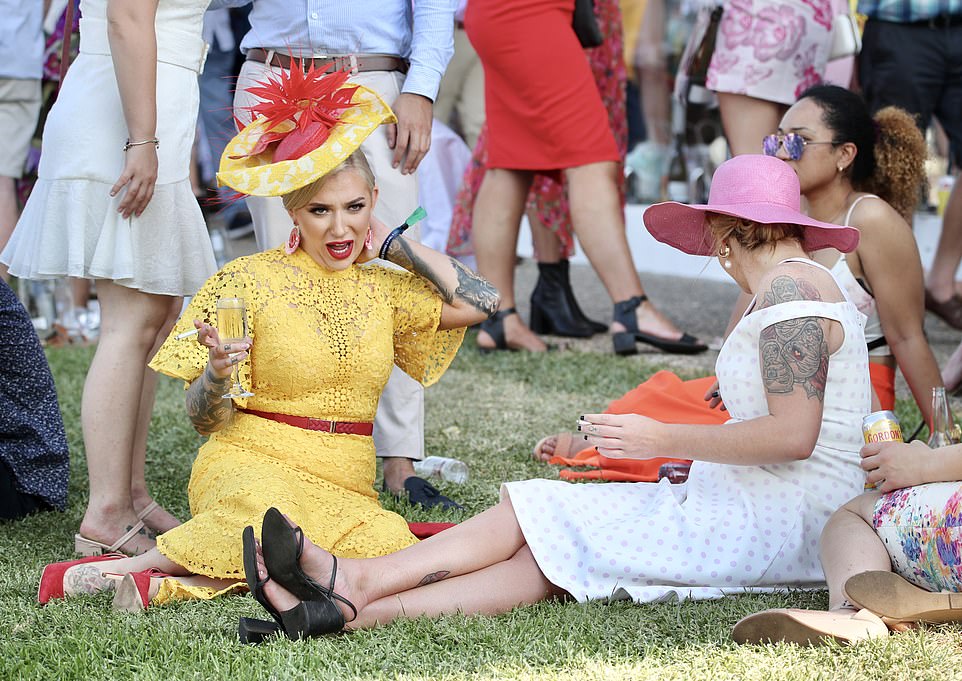 FASHION QUEENS: A group of women in bright head wear lounge on the grass as they sip on champagne

He estimated roughly 250,000 workers would be stood down under the latest changes.

They’ll join a further 250,000 people who are already out of work under stage three restrictions, with another 500,000 people working from home.

Hardware stores such as Bunnings will be accessible to tradespeople, but move to ‘click and collect’ for members of the public.

With the spike in cases, the Northern Territory has closed its borders once again to those in the Greater Brisbane area, Ipswich and Logan, the areas – joining other declared coronavirus hotspots of Victoria, Greater Sydney, Port Stephens, and Eurobodalla Shire.

Anyone travelling to the NT from these areas must undergo mandatory quarantine.

The state first closed its borders to all travellers in March but reopened them for for most travellers on July 17. 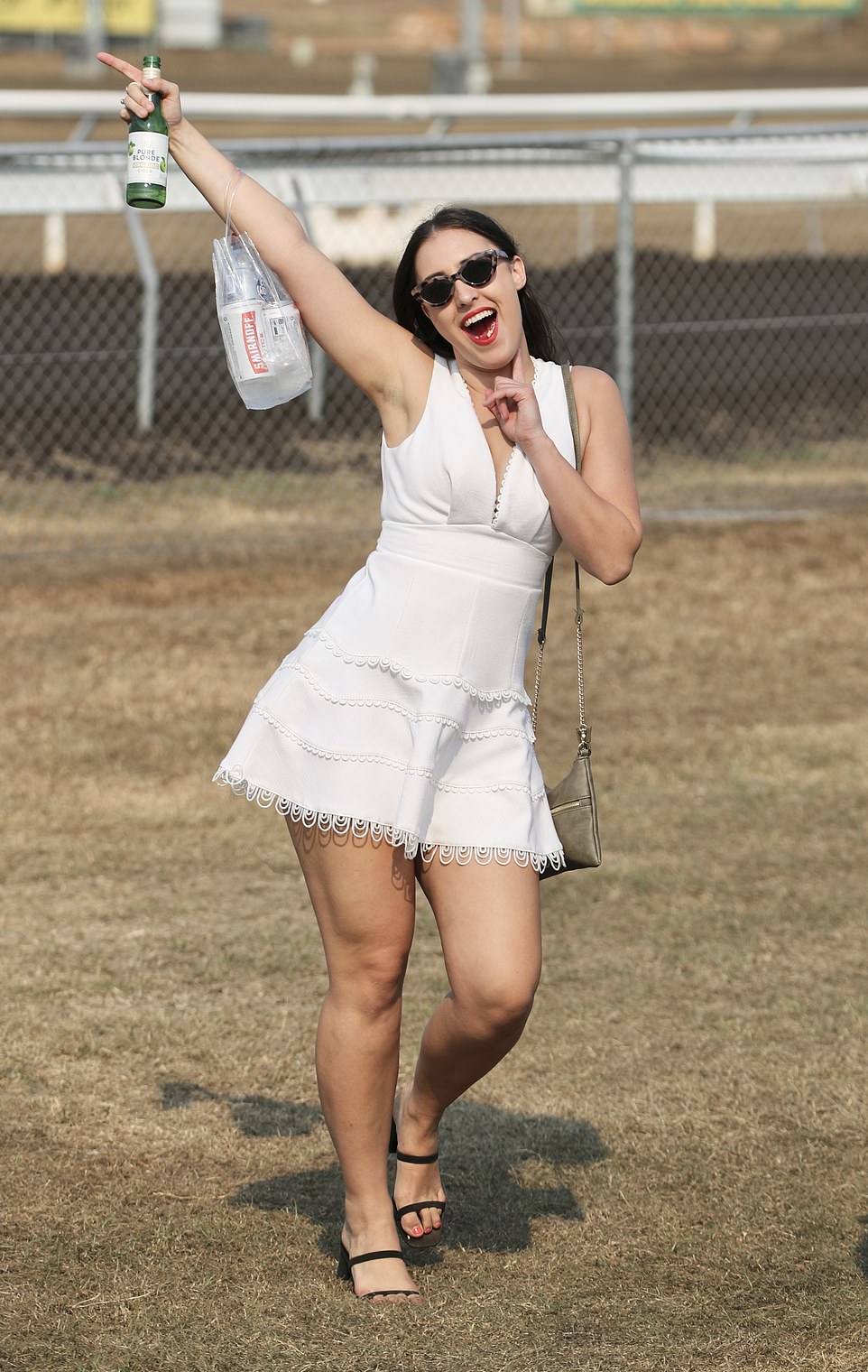 CHEERS: A woman in a white dress and red lip stick poses for a photo after the races in Darwin on Monday 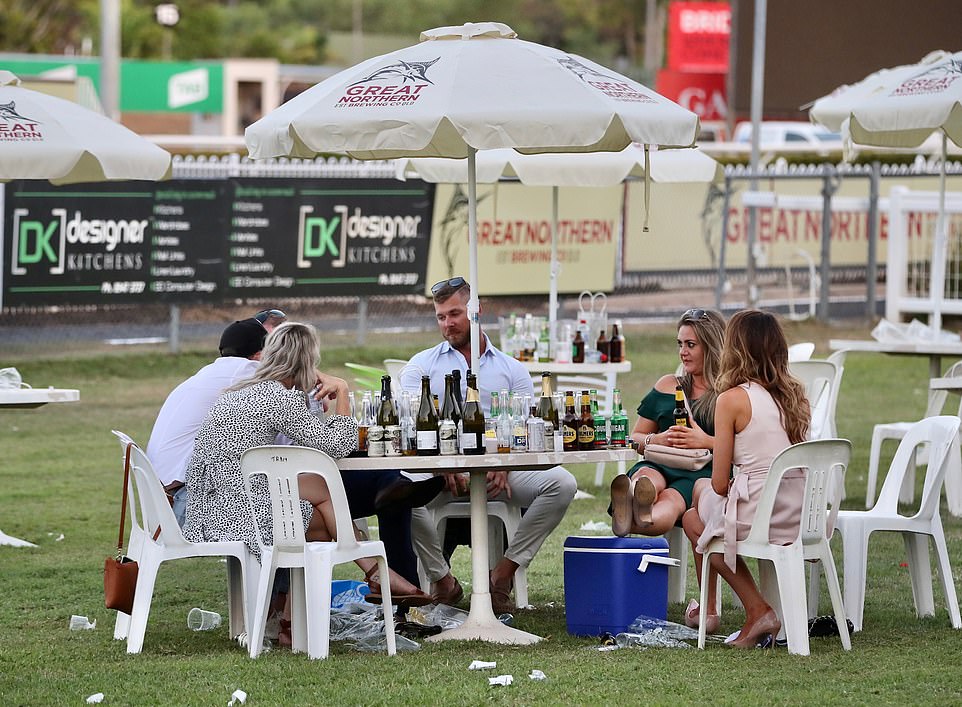 THIRSTY GROUP? A group sit at a table filled with bottles during the event at Darwin Turf Club’s new grandstand 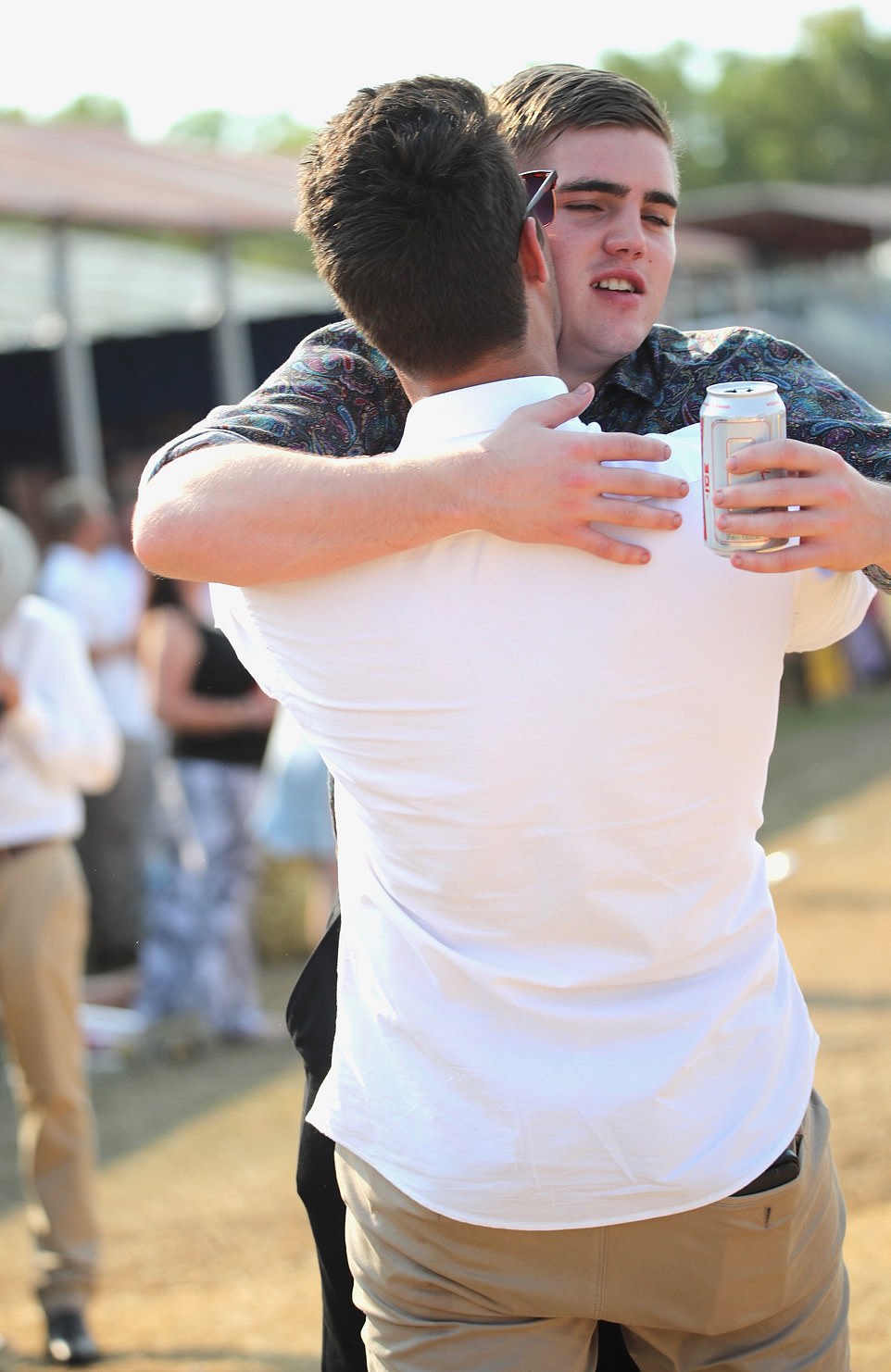 NO SOCIAL DISTANCING HERE: Two blokes embrace after the event at Darwin’s Turf Club on Monday 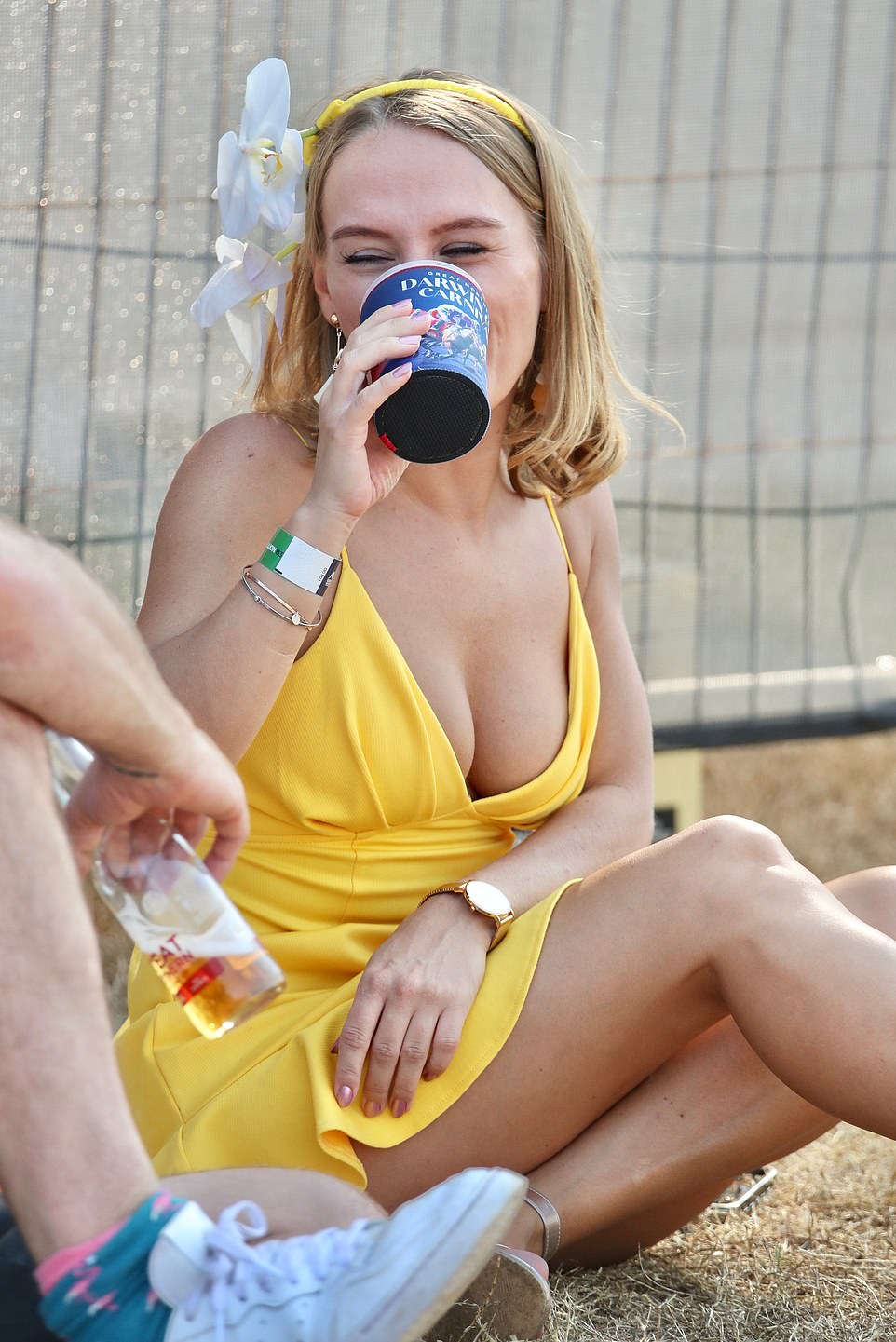 SPRING IS ON THE WAY: A woman in yellow enjoys a beverage as she chats to her friend 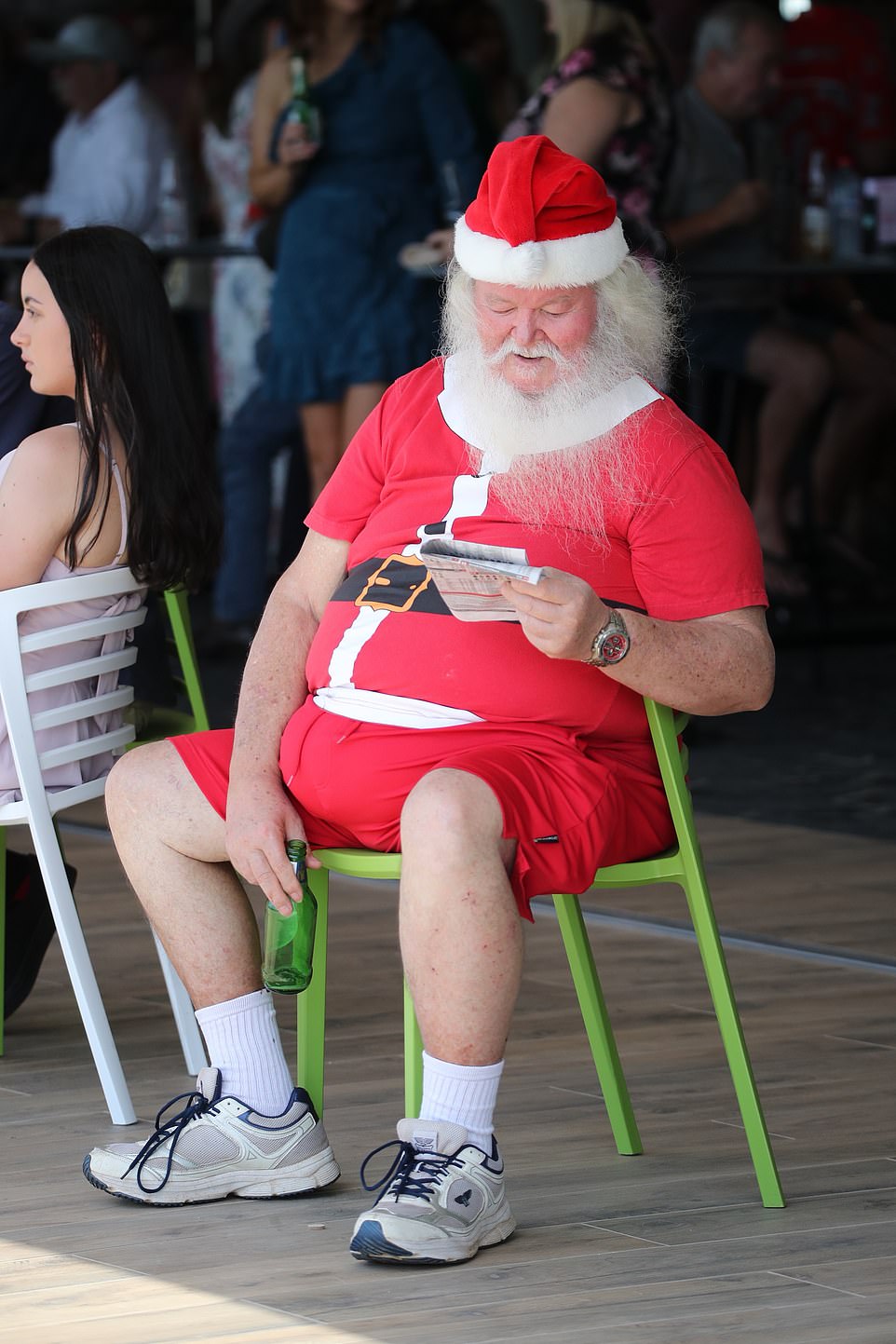 FESTIVE SEASON: A man dressed as Santa was seen relaxing in a chair, drinking a beer as he watched the races 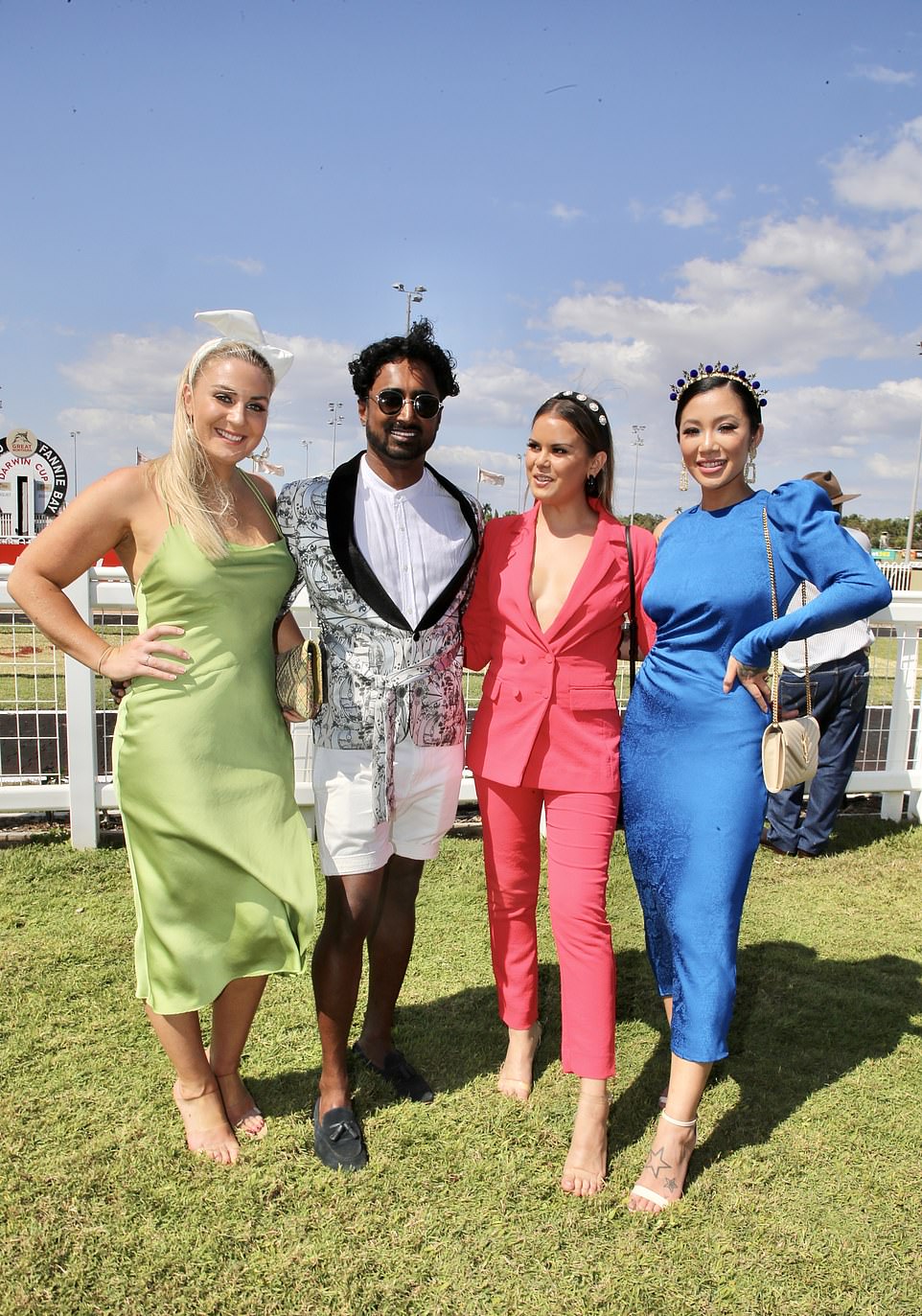