Revolting discovery inside a Hungry Jack’s chicken burger leaves customer furious: ‘That is so disgusting’

A woman has taken to social media to express her disgust after finding a bug in her Hungry Jack’s burger.

The Northern Territory woman, Sophia Mauboy, bought the burger from a Hungry Jack’s store in the Darwin suburb of Casuarina on Tuesday.

Furious at the find, Mauboy wrote a scathing Facebook post directed at the fast food chain that quickly gained the attention of other users.

‘I’ve never been one to experience it or complain about it, but IM DONE.’

A Northern Territory woman, Sophia Mauboy, found a bug while eating a burger (pictured) from a Darwin Hungry Jack’s on Tuesday night, posting photos of the find to Facebook

The bug in Mauboy’s chicken burger appears to be an earwig, an omnivorous insect with distinctive large pincers on it’s rear and an elongated, flattened or cylindrical body.

‘I get three quarters though a chicken burger, and I notice antennas,’ Mauboy wrote, noting she was lucky not to have eaten the earwig.

‘I peel back the top bun and no joke it’s a full insect.

‘You need to get shut down for good. Save yourself the trouble and just don’t go there. It’s just unacceptable.’ 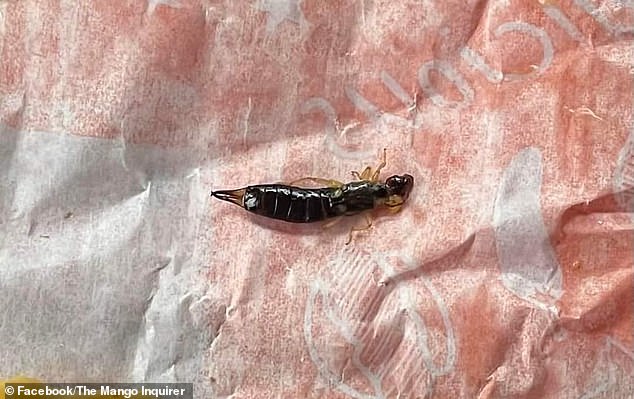 Facebook users were disgusted by the insect that appears to be an earwig (pictured), with distinct pincers on its rear and a long cylindrical body

Another wrote, ‘Oh my gosh. Make a complaint soph.’

‘Better than finding 1/2 a bug,’ other users joked about the find.

Another commenter riffed off the fast food chain’s catchphrase, writing ‘the bugs are better at Hungry Jack’s’.

According to the Australian Museum earwigs are most commonly found in Australia in protected, moist environments such as leaf litter and other organic ground debris.

An omnivorous insect, they feed on living and decaying plant and animal matter, making it malleable to most environments it finds itself in.

In a statement to Daily Mail Australia, a spokesperson for Hungry Jack’s say they are aware of the incident and are currently investigating.