Reward of $100,000 offered on cold case murder of a young New Zealand mother

Police are offering a $100,000 reward and immunity of prosecution as they grow increasingly desperate to solve the cold case murder of a young mother.

The partially-clothed body of Katrina Ann Jefferies, 22, was discovered wrapped in plastic near a road in Waikowhai Reserve in Auckland, in July 2005.

Police described the cause of death as ‘highly unusual,’ with many people making false confessions to murder throughout two subsequent investigations.

Despite hundreds of people being interviewed by Operation Waikowhai police, no one has ever been charged over her death.

Police described the cause of death as ‘highly unusual,’ with many people making false confessions to murder throughout two subsequent investigations

At a 2011 inquest, the Coroner found that Ms Jefferies ‘suffered death at the hands of another,’ but these findings were suppressed to avoid jeopardising the hunt for the murderer.

Ms Jefferies’ was found dumped down a bushy slope off a windy road in the Waikowhai Reserve on July 12, 2005.

Her body was only partially-clothed, and wrapped in a red tarpaulin and a rubbish bag.

A raincoat, a piece of plywood and picture with a wooden frame were found at the grisly scene, but tests on these items didn’t lead to anything.

A post-mortem found she was killed somewhere else, before the killer dumped her body in the reserve. 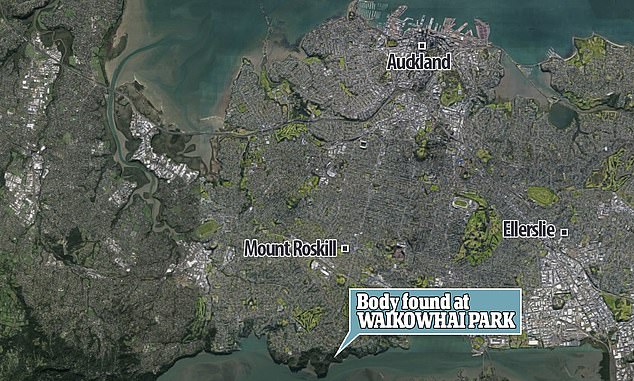 The partially-clothed body of Katrina Ann Jefferies, 22, was discovered dumped near a road in Waikowhai Reserve in Hillsborough, Auckland, in July 2005 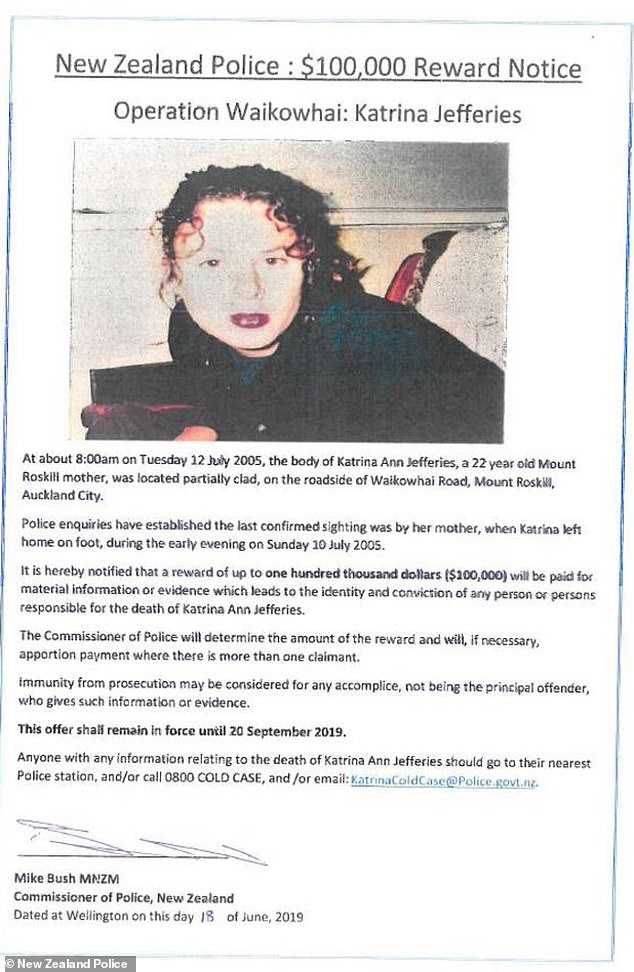 Police hope the $100,000 reward, along with immunity of prosecution, will encourage witnesses or anyone with information to come forward over the cold case

It was later found in an inquest that the mother-of-one often drank with friends in the reserve, which isn’t far from her mother’s home where she lived with her toddler son.

Her mother saw her leave their home in Mt Roskill in the early evening of July 10, which was the last time she would be seen alive.

A new investigation was opened in 2014, where police interviewed three women, leading to a man being charged with a number of serious sex and violence offences.

That man was Michael Te Arawaka Te Huia, or ‘Magic Mike,’ who lived in the same neighbourhood as Ms Jefferies.

Te Huia was sentenced to 19 years behind bars, after he was found guilty of 21 crimes against three victims over the space of 30 years.

Witnesses at the trial said the 60-year-old neighbourhood often invited teenagers to his backyard for a drink, and young girls would use him to score weed.

Te Huai’s crimes were unrelated to Ms Jefferies’ murder, but to avoid prejudicing the jury against him the link to her death was suppressed in his trial.

Police refused to comment on whether or not Te Huia was ever a suspect in her murder.

An internal review of all evidence gathered throughout the two trials was wrapped up in August last year, by acting Detective Superintendent Paul Borrell.

But when sought by the media, the police declined to provide a copy of the report.

Detective Inspector Uraia Vakaruru said that Borell wasn’t the only detective looking back into the cold case, saying another inspector was reviewing all the evidence.

Vakaruru said police will continue to comb through evidence to get to the bottom of Ms Jefferies’ horrific death.

‘We believe this is a solvable case and we know there are people out there who have vital information which will result in identifying those involved,’ she said.

Vakaruru believes the hefty $100,000 reward, along with immunity of prosecution, would encourage witnesses to come forward.

‘We know there are people out there who know what happened to Katrina,’ said Vakaruru.

‘Relationships and loyalties change over time and our hope is that someone who has knowledge of Katrina’s fate will ultimately do what’s right for Katrina and her family and come forward.’

July 12, 2005: Katrina’s partially-covered body is found by a man walking his dog in Waikowhai Reserve in Hillsborough, Auckland

June 2007: Police in Operation Waikowhai offer a $50,000 to anyone with information

November 2011: The Coroner rules Katrina’s death to be homicide but suppressed the way she died

October 2014: Unrelated charges were laid against Michael Te Arawaka Te Huia, or ‘Magic Mike,’ after complaints were made by three women interviewed on the Jefferies case

May 2016: Te Huia sentenced to 19 years in prison on 21 sex and violence charges. Police announced a review of the evidence in the Katrina Jefferies’ investigation

August 2018: An internal review of all evidence gathered throughout the two trials was wrapped up, outlining ‘some avenues of inquiries’ that police are considering