Rex Tillerson says the U.S. is ‘nervous’ about North Korea

The United States will continue its diplomatic efforts to settle the nuclear crisis on the Korean Peninsula until the ‘first bomb drops’, US State Secretary Rex Tillerson said in a rare interview on Sunday night.

‘I’m gonna use all the time available to me, our diplomatic efforts will continue until that first bomb drops. My job is to never have a reason for the first bomb to drop. And we don’t know precisely how much time is left on the clock,’ Tillerson said in an interview with the CBS 60 Minutes.

‘We’re not using a carrot to convince them to talk,’ Tillerson said. ‘We’re using large sticks. And that is what they need to understand.’

Secretary of State Rex Tillerson says the U.S. is ‘nervous’ sbout North Korea striking the mainland with a nuclear missile but vows to bring them to the negotiating table

Washington is alarmed by Pyongyang’s threats that its missiles could reach US soil, Tillerson noted.

‘It does make us nervous. It also stiffens our resolve. That kind of a threat to the American people by a regime like this is not acceptable,’ Tillerson underlined.

The alarming message came as the official pledged to do all he could to reach a peace resolution with the hermit kingdom before physical conflict breaks out.

Concerns that North Korea could launch a nuclear strike at the US have risen in recent months after the dictatorship announced it now had the ability to hit the American mainland.

Earlier on Sunday, US Senator Bob Corker said Tillerson has up to 10 months to resolve the nuclear crisis or otherwise the United States ‘is going to be facing one of the greatest military decisions,’ according to CBS. 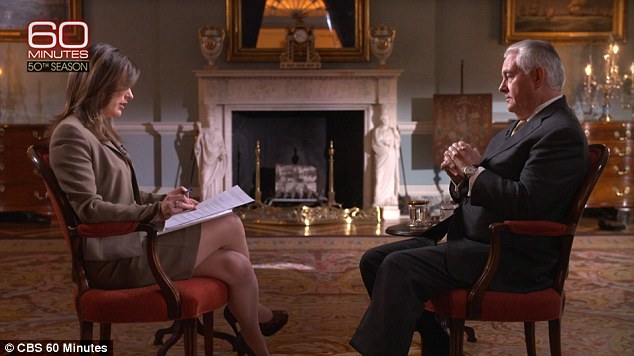 Tensions between the United States and North Korea have been mounting throughout 2017 as Pyongyang continued to conduct nuclear and ballistic missile tests, while Washington amassed troops and military assets in close proximity of North Korea and conducted military exercises.

Meanwhile, Tillerson said during the interview that the United States keeps its communication channels with North Korea ‘open’ in order to trace Pyongyang’s readiness for talks on the settlement of nuclear crisis.

In a direct plea to Pyongyang on, Tillerson urged Kim Jong-un’s regime to get in contact if he wanted to take part in talks with the US.

He said: ‘My job as chief diplomat is to ensure that the North Koreans know we keep our channels open, I’m listening.’

‘I’m not sending a lotta messages back ’cause there’s nothing to say to them at this point. So I’m listening for North Korea to tell me they are ready to talk,’ Tillerson said in the wide-ranging interview. 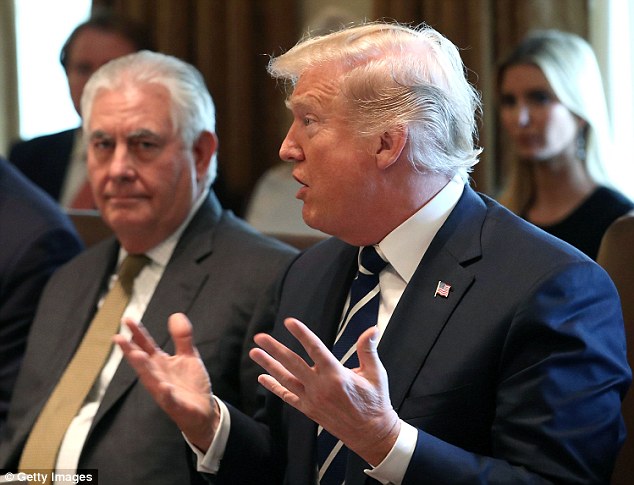 Tillerson said that he is the only person who knows when he’ll be resigning as chief diplomat, despite being plagued by rumors that he and Trump’s working relationship has disintegrated

In regards to how Washington is going to understand when Pyongyang is ready for the negotiations, the state secretary said the North Korea leadership ‘will tell me.’

‘We receive messages from them and I think it will be very explicit as to how we want to have that first conversation,’ Tillerson told the broadcaster.

The White House has been pushing for North Korea to take steps to stop the development of nuclear warheads and intercontinental ballistic missiles.

During the interview, Tillerson spoke of his first meeting with Russia’s President  Vladimir Putin.

He knew Putin from his days as CEO of Exxon and had many meeting’s with him when it came to negotiating deals over oil.

But according to Tillerson, the April 2017 meeting was not like the other times the pair had met.

‘It was different,’ he said, adding ‘the only thing I said to him was “Mr. President, same man, different hat.”‘ 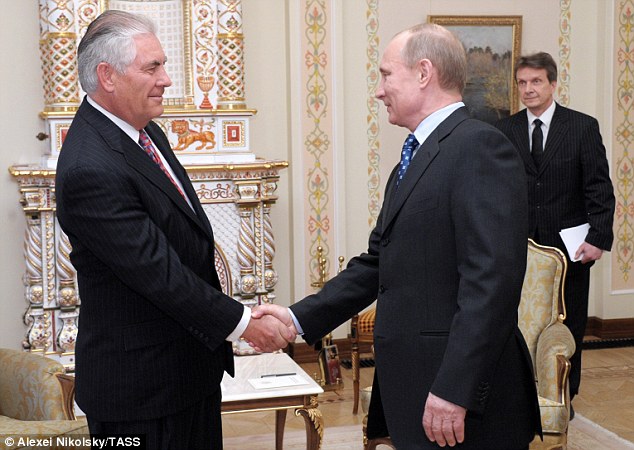 Tillerson described the moment he met President Putin once again in his new role as Secretary of State. The pair met had many times prior when he was CEO of Exxon

‘The dynamic changed because the issues were different,’ Tillerson went on to say.

‘What he is representing is different than what I now represent. And I said to him, “I now represent the American people.” And I think it was important that that be said right up front. And he clearly got, I mean, he clearly understood that as well,’ he noted.

And when asked whether he saw the Saturday Night Live skit poking fun at his relationship with the Russian president, he replied: ‘I did. My kids pointed me to it… I laughed out loud.’

When asked during the interview why so many embassies had yet to have U.S. Ambassadors appointed, Secretary Tillerson told CBS News there was ‘no dismantling’ and America’s ‘foreign policy objectives continue to be met.’

‘Well, there’s been no dismantling at all of the State Department,’ Tillerson told Margaret Brennan.

She asked how he could explain the lack of ambassadors in 41 embassies, including South Korea, Saudi Arabia, and Turkey. 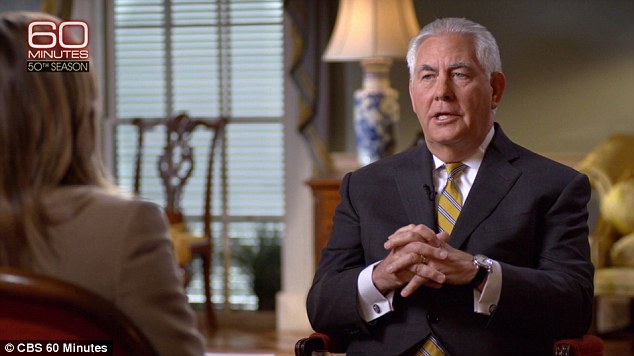 ‘We’ve got terrific people, both foreign service officers, civil servants, that have stepped into those roles around the world.’

Brennan pointed out those were only on an interim basis, to which Tillerson replied: ‘It is an interim basis. So clearly, it is not with the same kind of support that I wish everyone had. But our foreign policy objectives continue to be met.’

On why some of those embassies do not even have nominees, Tillerson said some were ‘in the process.’

‘It’s not a question of people being… are neglecting the importance of it. It’s just the nature of the process itself,’ he added.

Multiple reports in recent months have indicated Tillerson has reduced staffing and put a freeze on hiring in other positions. In addition, a number of career State Department officials have left the agency.

Sixty per cent of top-ranking career diplomats have left the State Department and the number of people looking to join the Foreign Service has decreased.

When pushed to comment on the relationship he has with President Trump, including whether or not he called Trump a ‘moron’ last year, Tillerson refused to be drawn.

Tillerson has declined to give a direct answer on whether he leveled such an insult.

‘I’m not going to dignify the question,’ he told Brennan. ‘We got so many bigger issues that we could be talking about. I’m not from this town. I understand this town likes to talk about a lot of things that are really not important.’

On how long he may remain in the role, Tillerson said that he is the only person who knows when he’ll be resigning as chief diplomat, despite being plagued by rumors that he and President Trump’s working relationship has disintegrated.

‘I’m here to serve my country. I committed to this president. My word is my bond. I ride for this brand. That’s why I’m here. And nothing anybody else says is going to change that,’ he told 60 Minutes.

Tillerson didn’t give speculation about tension between he and Trump ‘much thought,’ he said stressing that he and the president ‘typically will try to talk every day.’

Tillerson shrugged off press coverage of the pair’s public disagreements.

‘The president communicates in his own style, his own way, his own words. And from time to time I will ask him, “Are you changing the policy?” Because if we are, obviously I need to know, and everyone needs to know,” he said.

‘And to finish the thought, that has never happened. Every time I’ve talked to him he says, “No, the policy hasn’t changed.” And I say let — then I’m good. That’s all I need to know,’ Tillerson added.