On last night’s episode of the show, Luann, 55, got fans talking when she showed Ramona, 63, a photo of an American Idol contestant, as they were driving through Mexico, with the pair revealing they’d both been on a date with the singer.

The episode bleeped out the name of the man, however, Twitter was set ablaze with rumors that it was American Idol finalist Constantine Maroulis, 44, who is known for having once dated their co-star Tinsley Mortimer.

Ramona appeared to drop a clue that it was Constantine when she mentioned that Tinsley had also dated him, while his rep confirmed the speculation to UsWeekly.

The ladies certainly were discussing Constantine on RHONY last night. They were probably listening to his new album,’ his rep is quoted as saying. ‘Constantine Maroulis’ relationship with Tinsley was well documented several years ago.’

‘Constantine performed with Luann as part of her holiday tour last year and has enjoyed a friendship with Ramona as well. Constantine has great love and respect for them, considers each of them dear friends.’

During the episode, Ramona was heard saying: ‘We share a lot of people, don’t we? I went out with him. I know him well. Been there, done that. So has Tinsley!’

‘The streets are saying the girls are Eskimo sisters with Constantine Maroulis #RHONY’ one fan cheekily commented following the episode being shown.

The ladies had referred to the singer as an American Idol ‘winner’ though he was on a runner up on the competition, becoming a sixth-place finalist on the fourth season in 2005.

Constantine previously featured on Tinsley’s reality show High Society on The CW in 2010, and has also starred in Luann’s famed ‘Countess and Friends’ cabaret show. 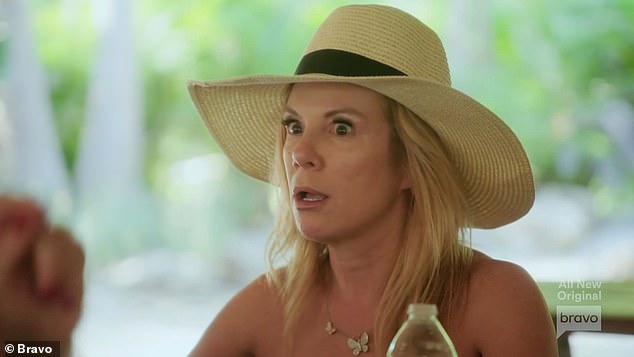 Revelations: Ramona claimed she, Luann and Tinsley had all dated the same man on a recent episode of the show… which fans believe is American Idol hunk Constantine Maroulis