Tragic question tradie, 22, asked his best mate moments before stabbing him to death with a kitchen knife in front of their friends – then asking police for a cigarette

A tradesman asked his best mate why he had to leave a raging house party just moments before the man stabbed him to death.

Rian Farrell, 23, stabbed his childhood friend Liam Cahill, 22, in the chest while celebrating his girlfriend’s birthday at a high-rise apartment in Docklands, Melbourne in May last year.

The men, both apprentice plumbers, had grown up together, and were friends through primary and high school and into their working lives.

An altercation kicked off after Mr Cahill punched another party-goer, prompting Farrell to ask him to leave.

Rian Farrell, 23, (pictured) stabbed his childhood friend Liam Cahill, 22, in the chest while celebrating his girlfriend’s birthday at a high-rise apartment in Docklands, Melbourne in May last year

When Mr Cahill refused to go home, a fight began between the pair and ended in Farrell grabbing a kitchen knife and plunging it into his best friend.

‘My life’s f***ed. I’m going to jail. Please sir can I have a cigarette?’ Farrell asked police after the stabbing.

‘This isn’t happening,’ he said.

Before the fatal attack, Mr Cahill had asked Farrell ‘You’re my best friend, why do I have to leave?’.

The 20cm blade went deep into Mr Cahill’s chest, piercing his heart and a lung.

During the incident, one of the girls who’d been at the party screamed ‘no’ and another saw a spray of blood on the wall. 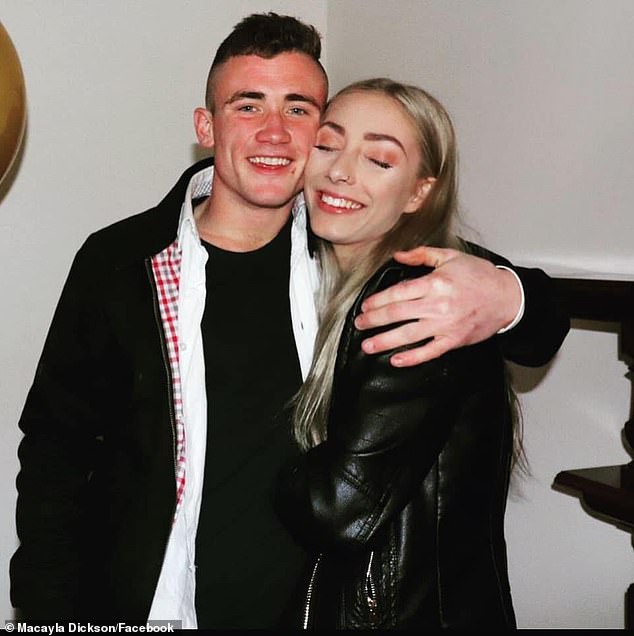 Mr Cahill had been caught in a fight with Farrell before he was stabbed in his heart and lung Pictured: Liam Cahill (left) with close friend Macayla Dickson (right)

Mr Cahill turned and left the apartment before he collapsed in the hallway and died.

Farrell then called two friends telling them what he’d done before going into the hallway where he screamed ‘no, wake up’.

Farrell had climbed down two storeys before breaking into another apartment on the 13th floor to get back onto the ground where he was caught by police.

He told police at the scene that Mr Cahill was his best mate and he wanted to know if he’d be alright.

He said he had killed Mr Cahill but he hadn’t meant it, before asking the officer how long he’d spend in jail for manslaughter. 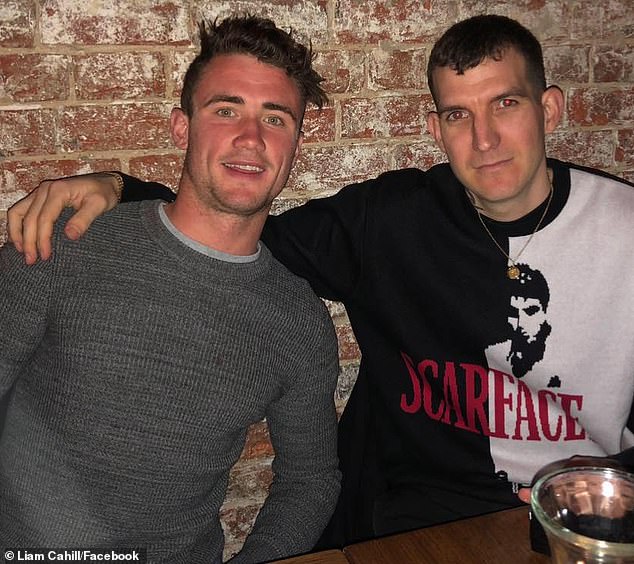 Supreme Court Justice Jane Dixon will answer that question when she sentences Farrell, who pleaded guilty to manslaughter.

Farrell was initially charged with murder. He has already spent a year in custody.

In a statement, Farrell’s father Barry offered condolences to the Cahill family and said they would do anything to give them back their son.

Farrell’s defence said he had been suffering nightmares since the attack and ‘can hear his friend screaming and see blood on the walls’, news.com.au reported.

He also said Farrell had acted in ‘excessive self-defence’.

Mr Cahill’s father Timothy said he would never forgive his son’s best friend for his ‘despicable act of betrayal’.