An heiress used to the finer things in life gets a rude awakening while holidaying with a skint single mother and five of her eight children.

Dasha, 17, grew up on a 17th century National Trust estate with her millionaire parents and older sister in the West Midlands, where her only responsibility was to care for the estate’s peacocks.

So it was a big shock to the system when she joined the Harris family for their trip to a Welsh working farm for the 5Star observational series Rich Kids, Skint Holiday.

Single mother-of-eight Kate Harris, who is a full-time mum on benefits and struggles to afford to take her children on holiday, welcomed Dasha on their camping trip – which saw the heiress introduced to communal showers full of spiders and set the challenge to feed eight people on a budget of £30.

Dasha, 17, an heiress from the West Midlands, pictured right, swapped her 5 stars hotels for a camping trip with skint single mother Kate Harris and five of her eight children – plus one of their boyfriends (pictured left) – on tonight’s Rich Kids, Skint Holiday on 5Star 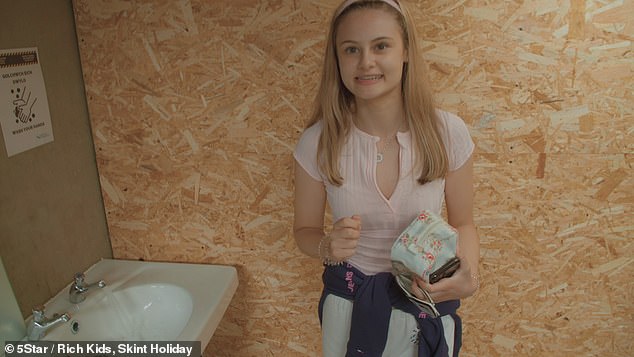 Dasha admitted in the programme she was not used to camping getaways.

She added she was much more accustomed to room service, with her wealthy family usually enjoying four exotic getaways a year.

‘We’d stay at five stars hotels, meals can end up being £60 to £100 per person,’ she admitted with an embarrassed chuckle.

The teenager grew up in the lap of luxury, and enjoys a 13sqm wardrobe all to herself, full of designer clothes.

‘I do love buying clothes like Armani, Louis Vuitton, DKNY, Prada, Gucci,’ the 17-year-old said, showing off her expensive accessories and garments which include a £1,814 cocktail dress. 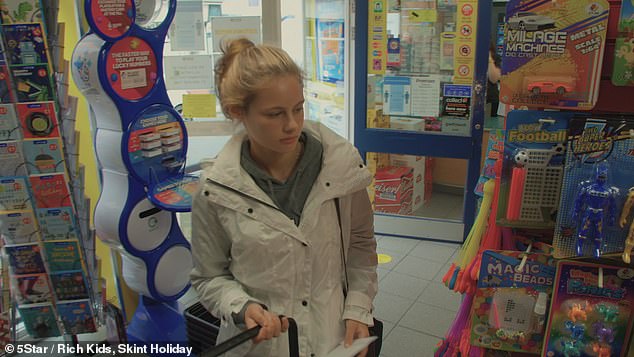 The heiress, who is used to fine dining, had to buy dinner for eight people on a budget of £30 at the local supermarket 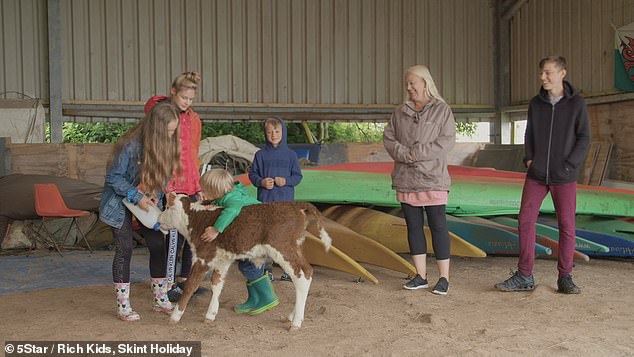 Dasha, who is more used to looking after peacocks on her family’s estate than calves, tried to adapt to holidays with the Harris family

‘I think it makes me look like I’m in Beverly Hills or something,’ she chuckled.

But eco-conscious Dasha said she has tried to reduce spending her parents’ cash on fashion.

‘I have slowed down, because global warming, and taking A-level geography, I’ve been a bit more conscious on spending my money on fast fashion,’ she explained.

When it comes to a relaxing holiday, Dasha said the worst case scenario would be to go camping – which is exactly what lies in store for her on her trip with the Harris clan. 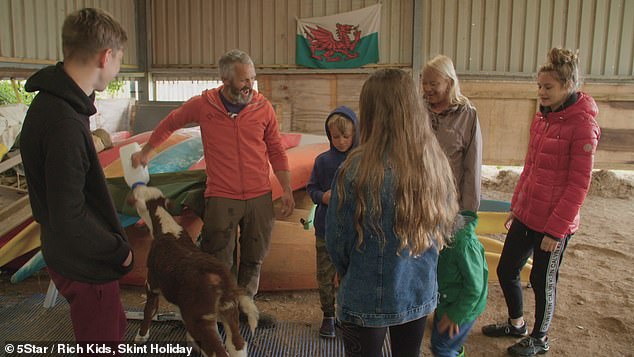 The Harris family and Dasha earned their stay at the farm by helping caring for the animals, including calves

‘I really don’t like bugs or things that can fly and crawl at me. And also, communal showers, it makes me squeamish sometimes,’ she admitted.

While Dasha was delighted to be going on a trip with the Harris family, the same could not be said of their tent, located next to a working farm.

Kate took five of her eight children on holiday with her – Amy, Alfie, Rebecca, Oliver and Patchy. Amy, 17, is expecting a child with her boyfriend Stephan, who also comes on the holiday with the family.

Dasha, who is not used to roughing it in a tent, told the camera she would try ‘not to make a big deal about it and grow up a bit’. But her resolution was put to the test when she visited the communal showers at the end of the day.

‘I see spider webs, I hope these webs are old and nobody lives there anymore,’ she said after entering the cubicle.

But her hopes were crushed when she clocked a large spider in the corner of the sink.

‘Nooo, did you see how big that was,’ she asked the camera, retreating away from the spider. ‘That is not my cup of tea, no, still not used to spiders, they make my skin crawl.’

After noticing a smaller spider in the sink, Dasha decided to drown her, asking the camera: ‘Am I gonna get arrested by PETA?’

Obviously struggling to overcome her fear of spiders, Dasha said: ‘I WILL manage.’

For Kate, a farming holiday by the Welsh coast, costing £350 to £400, was the best she could afford for her children. The single mother explained in the programme she received £1,350 in benefits a month to care for her children, which, after bills, left her with £400 to feed her tribe of eight.

The mother had to learn to sacrifice a lot in order to look after her children, explaining that getting food on the table for her kids was her priority.

‘I can go without but  my children need food,’ she said.

Speaking about Amy’s pregnancy, Dasha said that while she did not know anyone who was in the same situation as Amy at her age, she did not judge her. 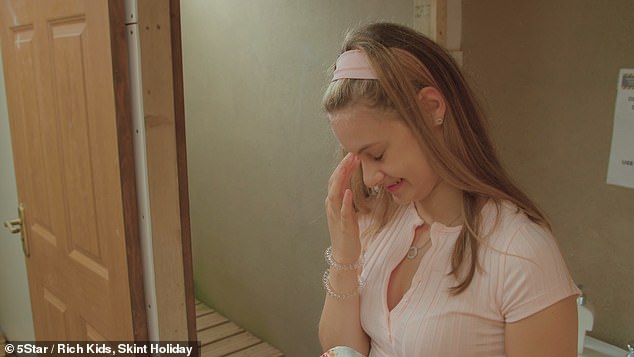 ‘I don’t think I have any friends that are in the same position as Amy where she is 17 and pregnant, but I have not judgment towards Amy, I respect her a lot actually,’ she said.

Dasha told Amy and Kate she wanted to have children young so that they could meet their grandparents.

During her time with the Harris family, Dasha learned the joys of looking for crabs by the water and helping around at the nearby farm, which was letting the family help out to earn their keep.

The heiress, who is used to having people wait on her hand and foot, didn’t hesitate to participate in group activities like washing the dishes and cleaning up.

On her second day, she bought dinner for the group of eight on a budget of £30 for a barbecue. This was a challenge for Dasha, who is used to fine dining and never has to count her pennies, with her parents happily financing her outings.