The prices of Britain’s most expensive beach huts are on course to break through the £400,000 barrier due to the huge demand for them by rich staycationers.

The wooden cabins at Mudeford in Christchurch, Dorset, have always commanded premium prices but they are now selling for more than people pay for a four bedroom house in many parts of the country.

Just two weeks ago one sold within hours of being listed for £350,000. It is thought the final sale price was well above this figure due to the amount of potential buyers vying for it.

There are about 360 huts on the Mudeford sandbank that is so remote it requires a 20 minute walk to get to, a ride on a land train or a short ferry ride across Christchurch Harbour.

The huts have no running water, mains electricity or toilets and washing facilities are in a communal shower block.

The prices of Britain’s most expensive beach huts on the exclusive Mudeford Sandspit in Dorset (pictured) are on course to break through the £400,000 barrier due to the huge demand for them by rich staycationers looking to get away this summer 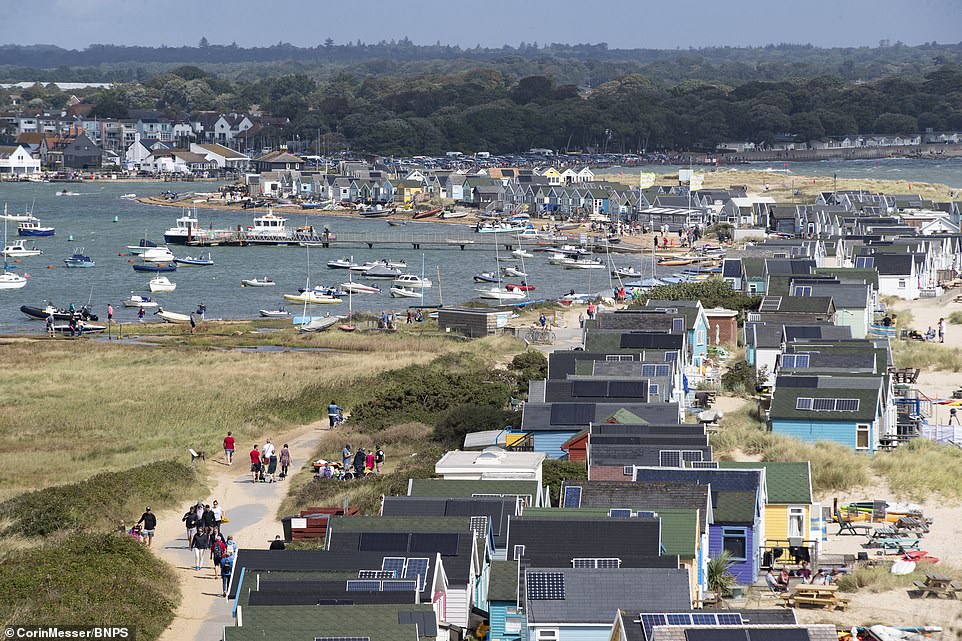 There are about 360 huts on the Mudeford sandbank that is so remote it requires a 20 minute walk to get to, a ride on a land train or a short ferry ride across Christchurch Harbour (pictured) and none of the wooden huts have electricity or toilets

Yet the prices for the highly desirable holiday boltholes have rapidly increased over the past 20 years due to demand far outstripping supply.

And since the start of the pandemic last year that demand has surged to a new high.

The 65-year-old said: ‘When we sold ours I didn’t think the prices would go any higher but I was quickly proved wrong.

‘Most people who are going to sell their huts have sold out by now and so you don’t get that many that come back on the market.

‘When one does become available I would guess that the estate agent has between 15 to 20 names on a waiting list and so the sale becomes something of a telephone auction with the richest person outbidding all the others. 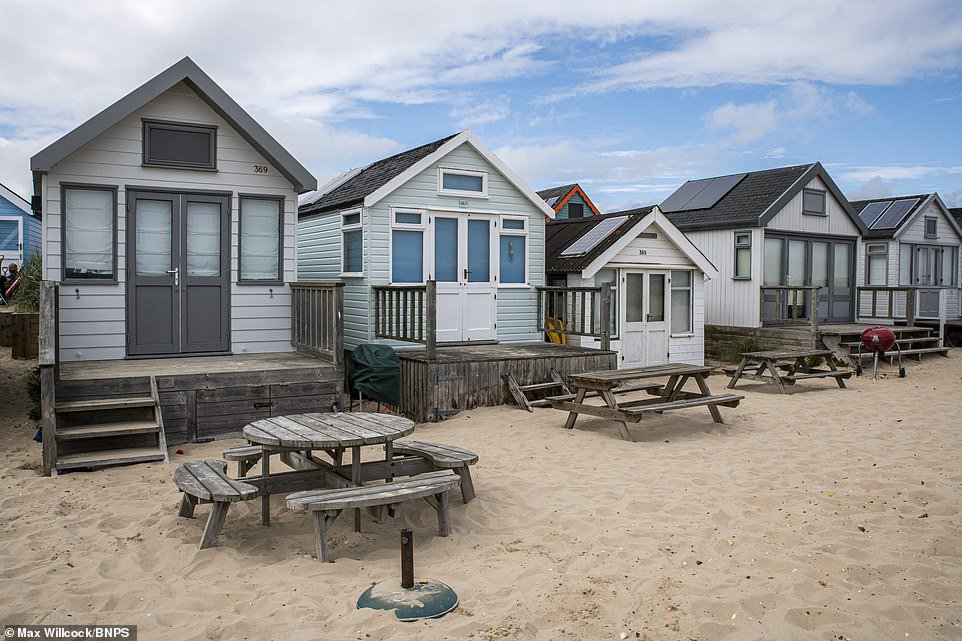 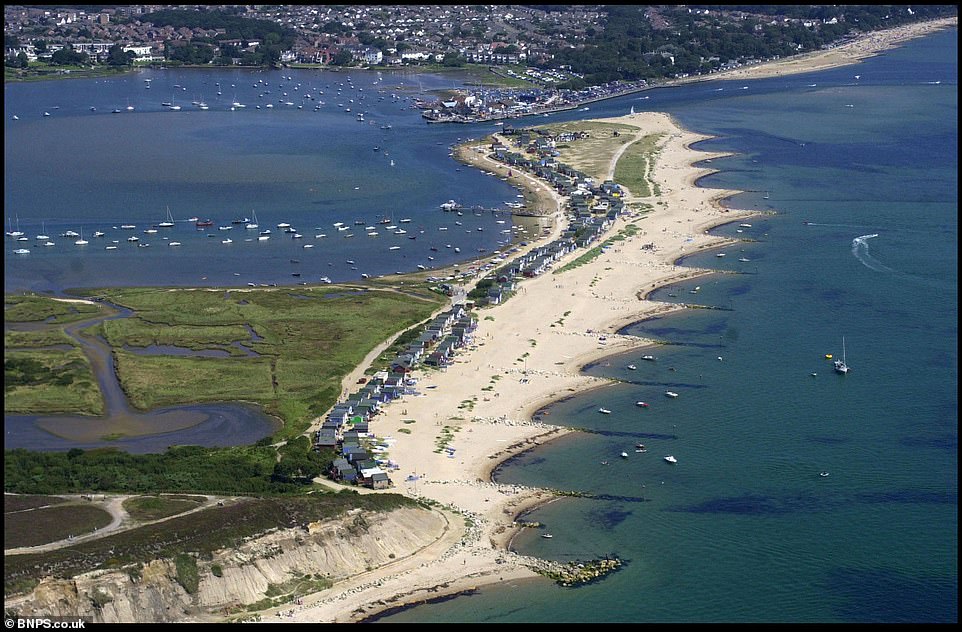 Would-be owners have to be cash buyers and have to stump up £4,500 a year to the local council in fees. Pictured: Mudeford

‘When we sold ours we just said we would sell it to the first person to come up with £120,000. We weren’t interested in gazumping.

‘At the time I couldn’t explain why the huts were so valuable but in a lot of cases they are bought by people who work in the City spending their big bonuses. We sold ours to a guy from London who was a BBC manager.’

The huts can be slept in from April to October and they generally sleep up to six people, with four mattresses on a mezzanine level in the roof and the seating areas downstairs doubling as extra beds.

Buyers are attracted to the spit’s remote location as cars are banned.

Because it is not possible to secure a mortgage for the beach huts, would-be owners have to be cash buyers. They also have to stump up about £4,500 a year to the local council in fees. 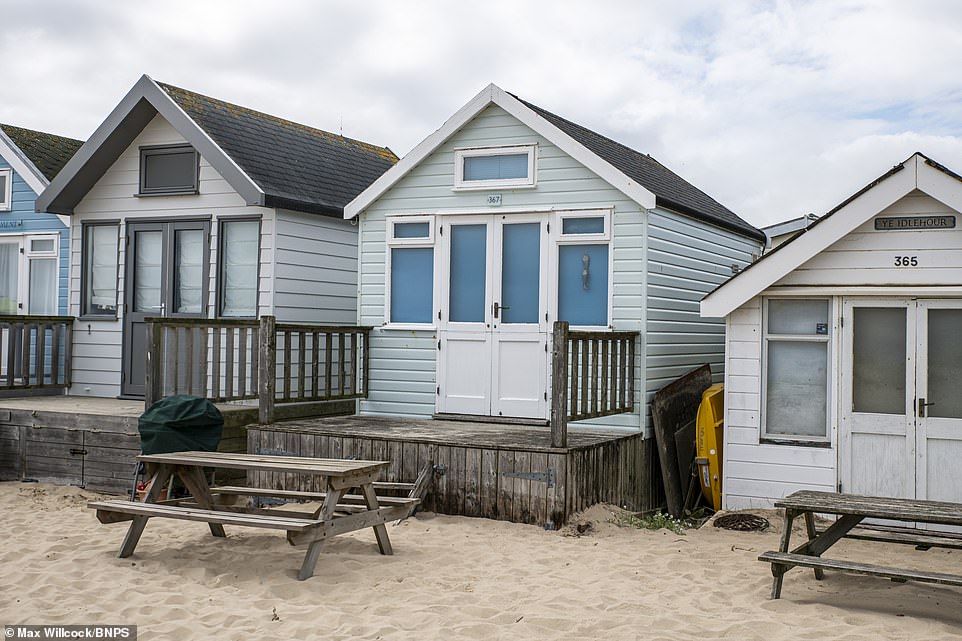 Desirable: Locals believe the high prices could be down to the limited number available and the secluded, idyllic location

He said: ‘There have only been about 10 huts added to the spit in 60 years so it is a question of supply, compared to Bournemouth where there are 1,500 huts and Brighton where there are 2,000.

‘These are enormous huts with amenities which you can live in for eight months of the year and it is a beautiful, peaceful location with the sea on one side and the harbour on another.

‘You feel like you are on a little island.

‘Obviously, the uncertainty over foreign travel will also help drive up prices with people growing fed up of government regulations.’

The UK’s ‘most expensive’ beach hut sells for £330,000 after bidding war breaks out to buy wooden cabin in Dorset for more than the average house price in England

The wooden cabin at Mudeford Spit in Christchurch Harbour, Dorset, was listed for sale for the same asking price as a five bedroom detached house in Hull last June.

Four potential buyers put in offers on the 12ft by 10ft hut – two of them without even viewing it.

The final sale price smashed the record amount paid for a beach hut on the exclusive sandy peninsula.

A second hut, that was also listed for £325,000, sold for just under that amount after being on the market for just a few days.

In 2018 another property on Mudeford became the country’s most expensive beach hut after selling for £295,000.

The average price of a house in the UK is £231,185, according to recent Government data from January this year. 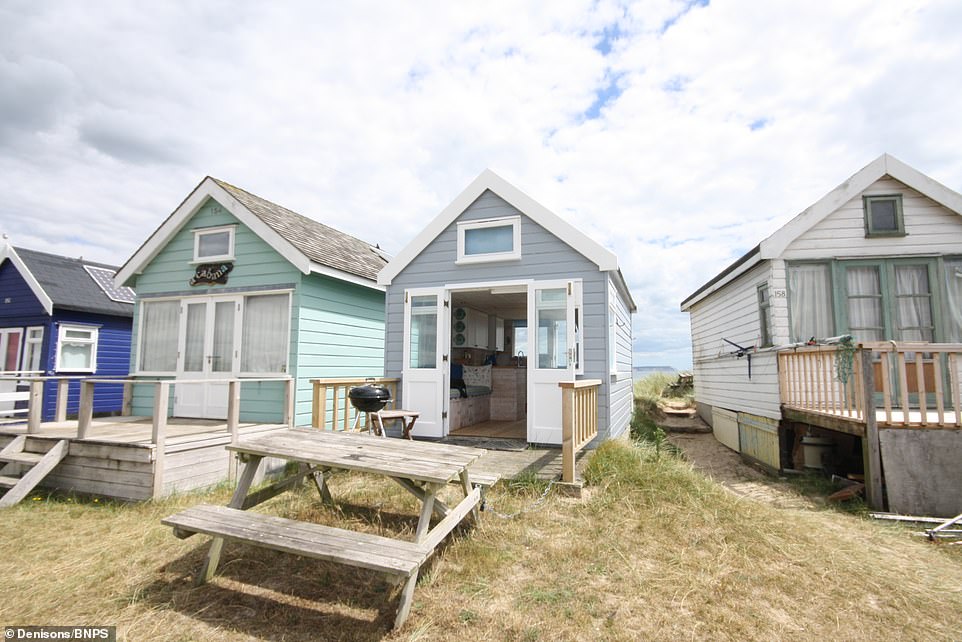 The wooden cabin at Mudeford Spit in Christchurch Harbour, Dorset, was listed for sale for the same asking price as a five bedroom detached house in Hull last Friday 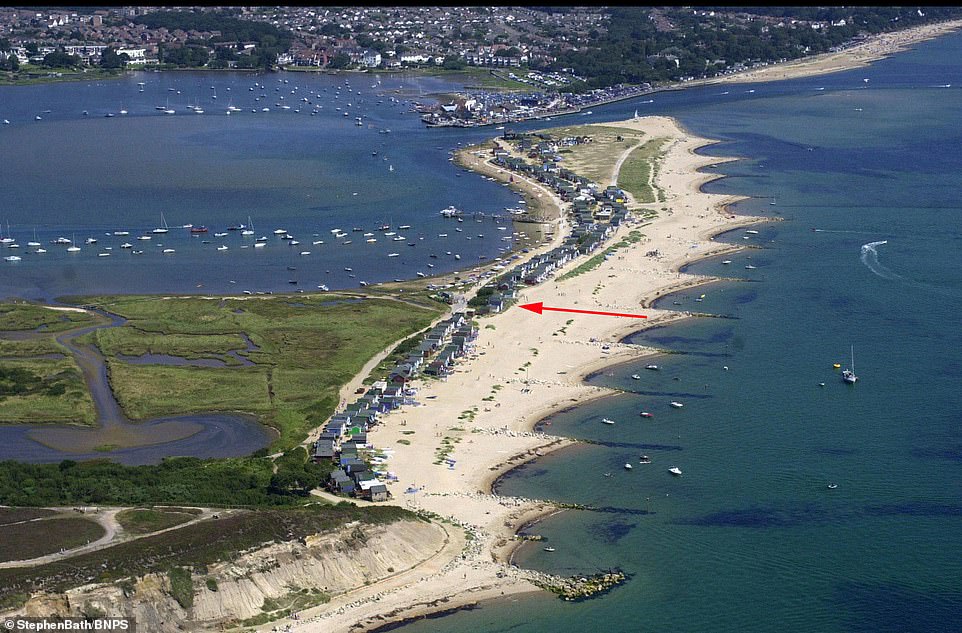 Cars are banned from the remote spit which has to be reached by a ride on a novelty land train, a short ferry crossing or a 30 minute walk

The huts at Mudeford have no mains electricity or running water and shower facilities are in a shared communal block.

Cars are banned from the remote site which has to be reached by a ride on a novelty land train, a short ferry crossing or a 30-minute walk.

But its isolated position is what attracts wealthy people to buy the cabins which can sleep up to six people each.

The demand for them has never been greater due to people being put off travelling abroad last summer.

Andy Denison, of Christchurch-based Denisons estate agents, said: ‘The demand for the beach huts at Mudeford is the highest I have ever known it right now. It has gone crazy. 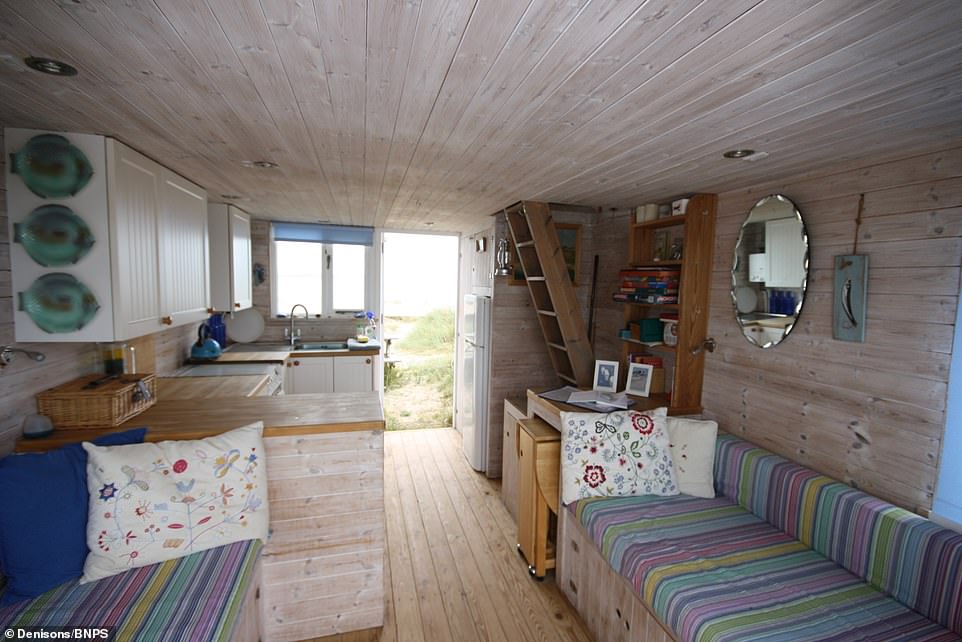 The interior of the £325,000 currently on sale. The huts at Mudeford have no mains electricity or running water and shower facilities are in a shared communal block 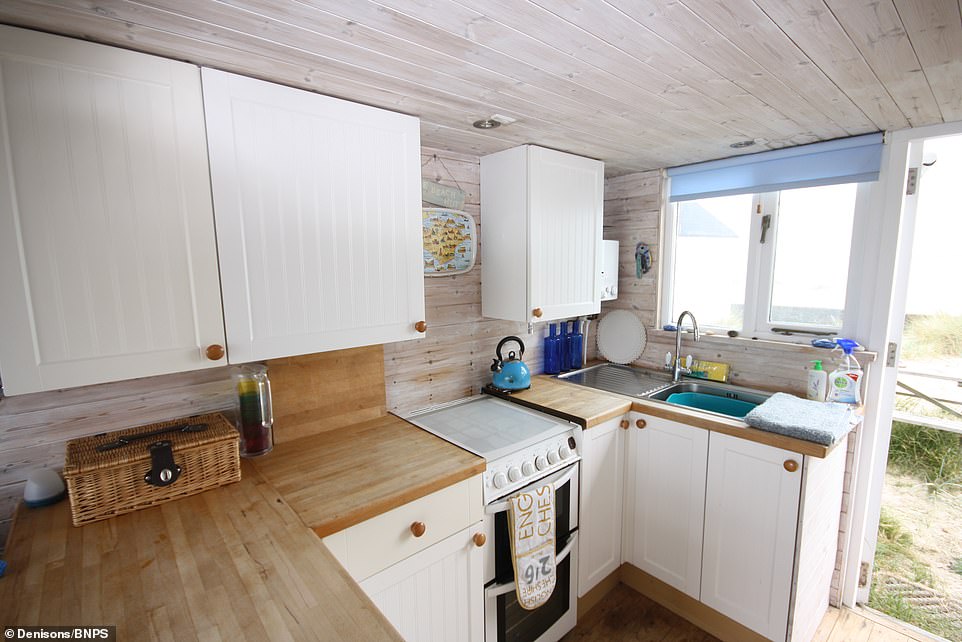 ‘We took on another one last Friday for £325,000, we arranged for two viewings that afternoon.

‘Since then we have had four parties putting in offers. Negotiations are ongoing but it will sell for over that asking price which will be a record.

‘These people are cash buyers from out of the area who want to enjoy the English seaside this year and maybe rent the hut out to other holidaymakers as well.

‘It is all down to the increase in staycations. People are throwing in the towel on foreign holidays this year, they are very wary of them.

‘The cost of flights and hotels is starting to get expensive and people don’t know what it will be like in the resort when they get there in terms of being restricted in hotels and restaurants.’ 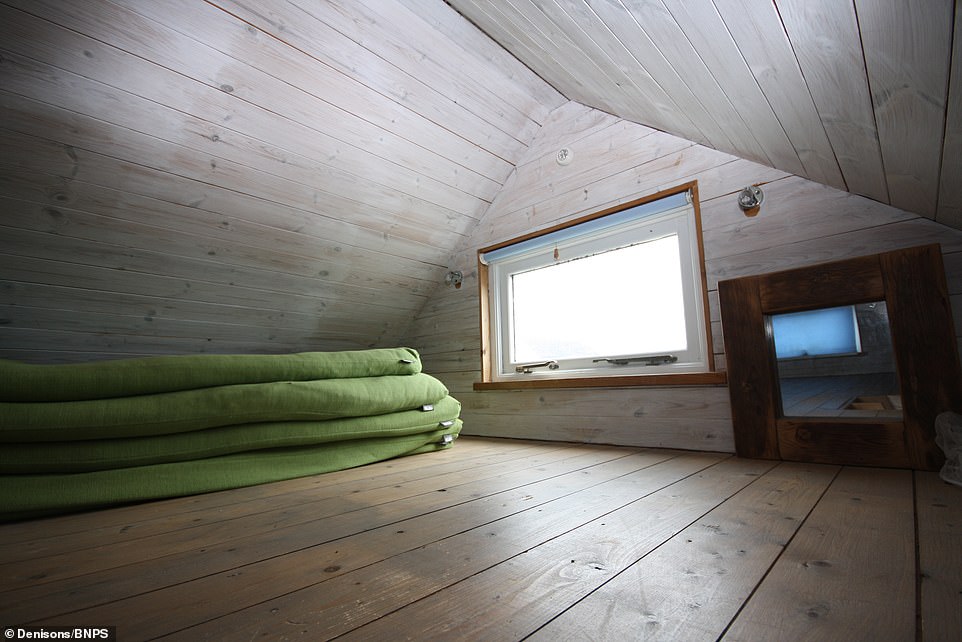 There are about 360 beach huts at Mudeford, all of which are privately owned. Pictured: The beach hut’s loft

There are about 360 beach huts at Mudeford, all of which are privately owned.

The hut that was being fought over was in an ‘excellent’ position on the spit, with uninterrupted views of the Isle of Wight to the front and Christchurch Harbour.

It has a small kitchen that has a fridge freezer and a cooker run on Calor gas and hot water from a pump powered by solar panels on the roof.

The front half of the hut has the lounge area that doubles as a bedroom which can sleep four people.

A small set of wooden steps leads to a small sleeping area in the loft space for two more people.

It also has a chemical toilet and double glazed windows and double doors that lead out to a small decking where there is a barbecue.

As well as the eye-watering purchase price, the owners have to pay annual rates to Bournemouth Christchurch and Poole Council of about £4,500 a year.

Owners can only sleep in the huts from March to October but can visit any time of year.