Sir Richard Branson is teaming up with Dubai port operator DP world to enter the hyperloop business and move cargo at a top speed of 760mph.

The cargo system, which is being designed alongside a possible passenger service by Virgin Hyperloop One, will be called the DP World Cargospeed.

Sultan Ahmed bin Sulayem, the port operator’s CEO and chairman revealed the at a glitzy announcement alongside billionaire Mr Branson today on the floating hotel Queen Elizabeth 2 in Dubai.

A hyperloop involves levitating pods, powered by electricity and magnetism, hurtling through low-friction pipes at a top speed of 1,220 kph (760 mph). Tesla co-founder Elon Musk first proposed the idea in 2013.

Sheikh Mohammed bin Rashid al-Maktoum, Vice-President and Prime Minister of the UAE and ruler of Dubai, sits with Sir Richard Branson, CEO of the Virgin group, in Dubai today 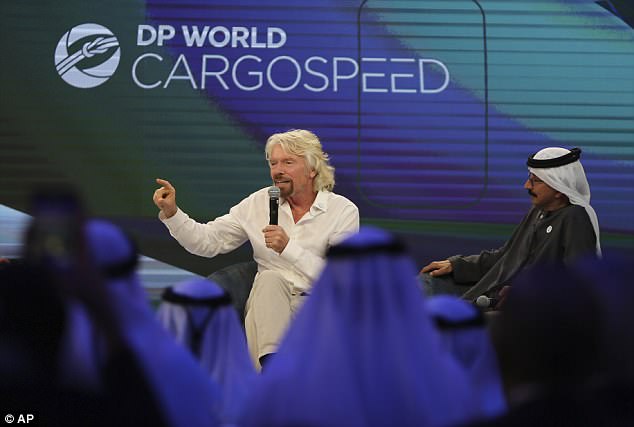 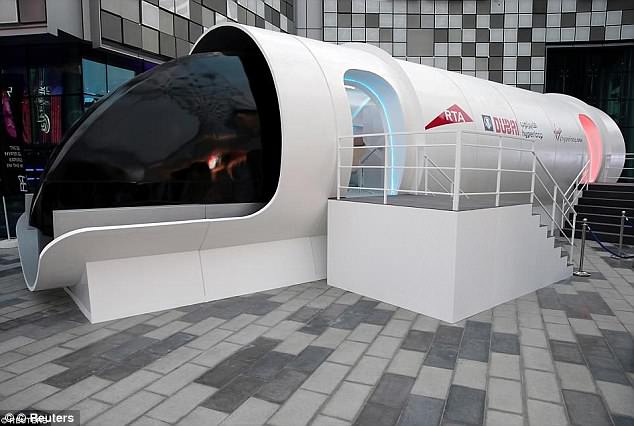 Virgin unveiled a prototype of its pods earlier this year (pictured). Dubai’s Road Transport Authority (RTA) unveiled the hyperloop design at a ceremony in the city

It remains unclear what, exactly, the branding means. At the least, it shows how much money DP World has poured into the company over different funding rounds.

When the hyperloop will become operational is an open question as Los Angeles-based Virgin Hyperloop One has faced shake-ups in recent months on its board of directors as well.

‘Today things are changing. Today our role is not in the port,’ bin Sulayem said. ‘Our role is from the time the cargo leaves the factory before it reaches the consumer’s door.

‘Dubai is on the cutting edge of everything,’ Mr Branson said.

Models in white jumpsuits and capes stood at every winding turn on the way to board the Queen Elizabeth 2, which recently became a floating hotel after nearly a decade-long dockside wait. 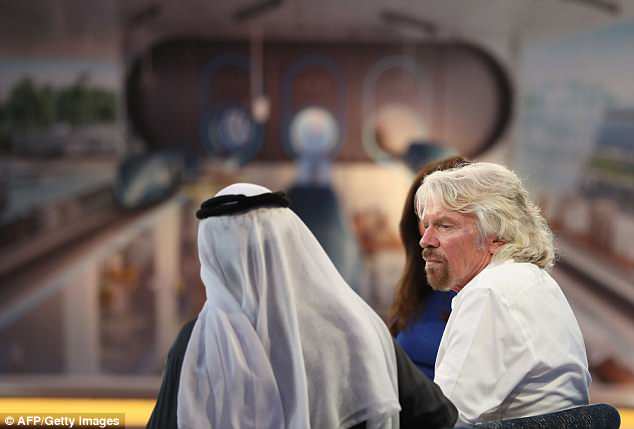 Sir Richard Branson, CEO of the Virgin group, looks on during the unveiling of the DP World CargoSpeed, a partnership to build a hyperloop system for cargo in the UAE 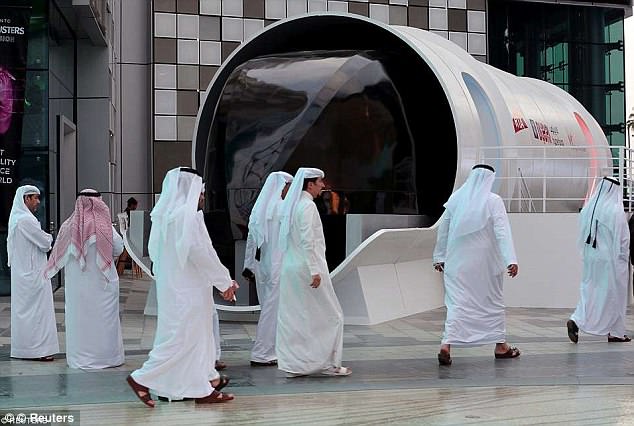 This level of speed is achieved by reducing air pressure inside the tube to an equivalent measure experienced at 200,000 feet above sea level 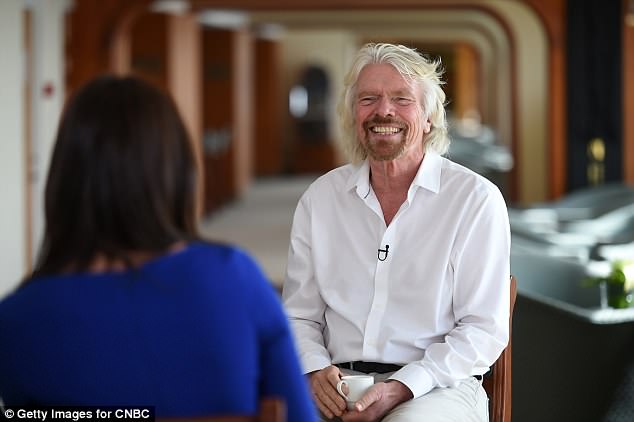 Slick graphics bearing an April 29, 2025 date showed pods coming in from a series of tubes and racing past a Dubai skyline featuring a solar panel farm.

However, no-one offered a date for such a service to begin in Dubai. Officials said they hoped to start construction on a test site in India next year.

Hyperloop One officials suggested in 2016 the travel time by hyperloop between Dubai and Abu Dhabi would be only 12 minutes – significantly down from the hour-plus journey it now takes by car between the two cities.

Hyperloop TT, another firm based in Los Angeles, announced plans earlier this month to build a test track within a 6.2-mile property near Abu Dhabi’s border with Dubai. Its partner is the largely state-owned developer Aldar Properties.

Branson, who Forbes Magazine estimates has a net worth of $4.9 billion, became Virgin Hyperloop One’s chairman in December. 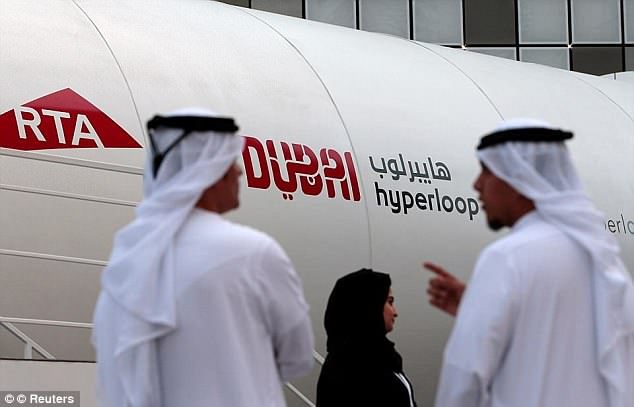 The cargo system, which being designed alongside possible passenger service by Virgin Hyperloop One will be called the DP World Cargospeed 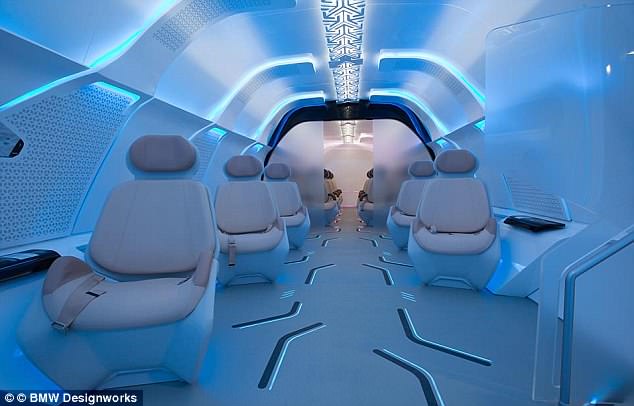 The passenger pods boast deluxe interiors, leather seats and high definition screens for displaying information and entertainment. Each pod can accommodate up to ten passengers

Hyperloop One’s former chairman and co-founder, the venture capitalist Shervin Pishevar, took a leave of absence after facing a series of sexual misconduct allegations, which he denied.

Asked about the boardroom challenges, Branson only said that ‘the previous chairman has left and I stepped in.’

As one of the world’s largest port operators, DP World has looked at the potential of using hyperloop technology to speed cargo from its Jebel Ali port operation in Dubai to storage areas further out into the surrounding desert to free up space.

Bin Sulayem refused to say how much DP World has spent across three different funding rounds with Virgin Hyperloop One. However, he did describe the port operator as ‘the largest investor in hyperloop.’

Virgin Hyperloop One in total has raised some $276 million in funding rounds, according to the business information website crunchbase.com. 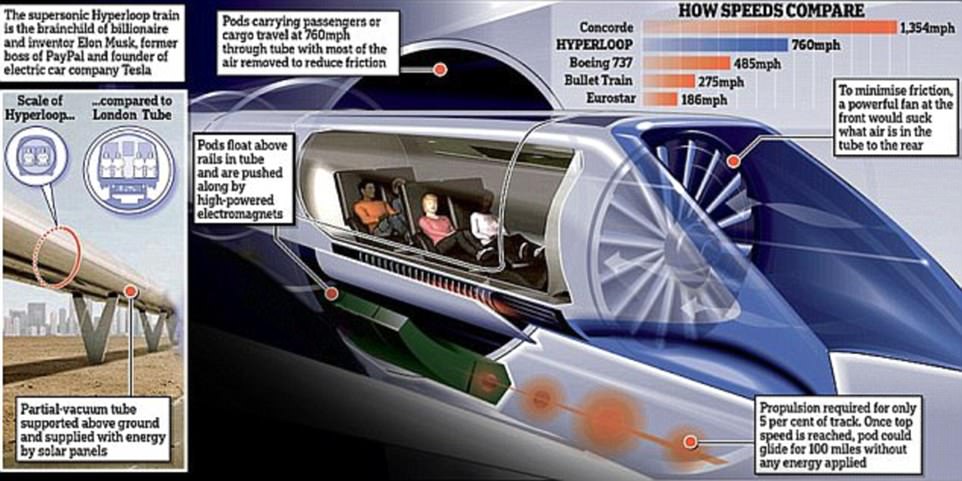