The son of Virgin billionaire Richard Branson has warned of ‘civil unrest’ in the Caribbean after the devastation of Hurricane Irma as troops are called in to handle looters.

‘Unfortunately some of the prisoners have escaped and are now armed.’

It comes after the Netherlands sent extra troops to the French-Dutch island of St Martin amid reports gangs carrying knives and guns were terrorising hurricane-hit communities.

Residents have also complained of looting on the islands of Anguilla, Barbuda, the and St. Barts after howling 185mph Irma tore through the region.

In his video message, Branson warned people hoping to help in the clean-up operation to check first with officials about safety on the ground.

He said: ‘It’s really important if you are helping and you are trying to send supply boats out to the area that you go and get information on the ground from official channels and ideally you have some security on the boats

‘I don’t want to panic anyone but it’s really important people are aware of the situation there. Some areas are okay, some aren’t. Just get the right information.

At the weekend, a further 50 police officers were sent to help deal with looting, Foreign Secretary Boris Johnson said, as he pledged to be there ‘in the long-term’ for British residents.

Meanwhile, France, which oversees neighbouring Saint Barthelemy and the other half of St Martin, said the police presence on the two islands had been boosted to close to 500. 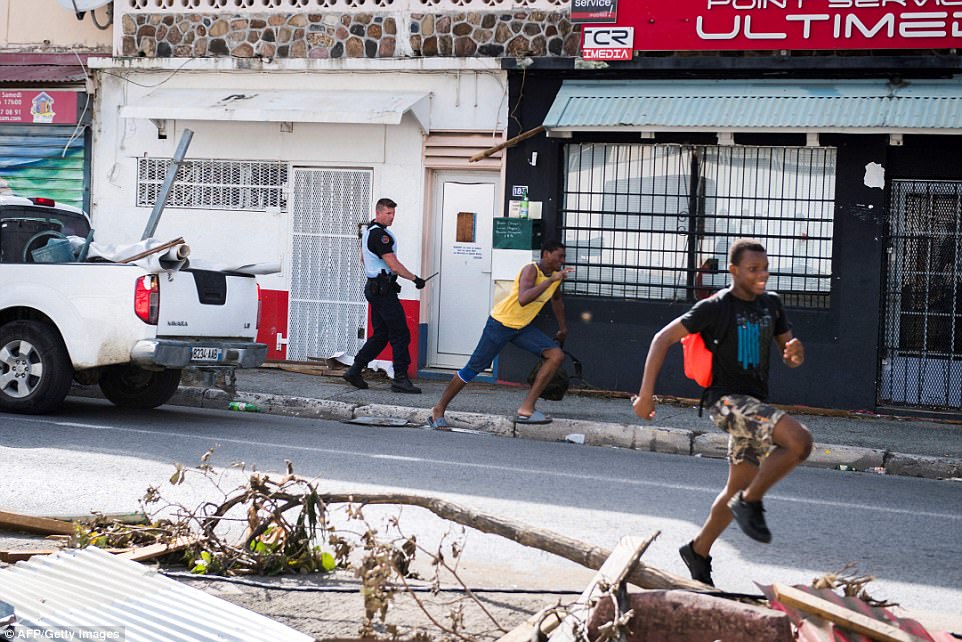 In St Martin, the French occupied half of the island, police men deterred other looters after Hurricane Irma 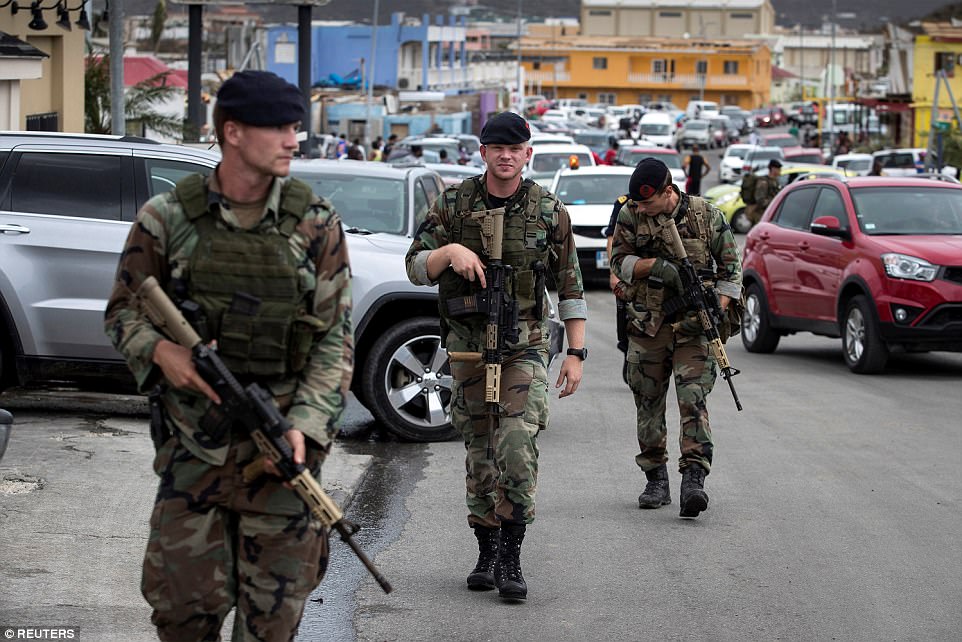 Troops are being called in to stop looters armed with guns and machetes on hurricane-ravaged St Martin with food, water and medicine running low, it has emerged. Dutch soldiers are pictured patrolling the streets on the Dutch side of the island

The French interior ministry said 11 people suspected of ‘malicious actions’ had been arrested since Friday as television footage showed scenes of chaos on the islands, with streets under water, boats and cars tossed into piles and torn rooftops.

This comes after worrying reports of erupting violence emerged from St Maarten, the southern half of the Caribbean Island it shares with St Martin, in the wake of Hurricane Irma.

Several people who were stranded on the island said looters had begun raiding hotel rooms and homes to profit from the natural disaster.

Jos Smart, 26, and his girlfriend Julia Taylor, 30, reported being too afraid to leave their ‘half-destroyed’ hotel amid reports of looting and violence outside.

Describing the apocalyptic scenes in St Maarten Jos Smart’s father Ian said: ‘They have not had any water for a day. They said the sounds were apocalyptic and they have likened it to a war zone. They are holed up in a half-demolished bathroom and their phone is running out of battery. There have been rats in their room looking for food.

He added: ‘At night time there were people knocking on their door, and so there are 12 hours of sheer blackness to get through with the terror of who is going to knock down the door.’

One woman claimed US and British tourists had bee attacked after they became stranded.

Troops were called in on Friday to offset the problem.

Massimiliano Napoliello, the manager of a bar in Maho Beach, issued a desperate plea for help on Facebook.

‘The situation in SXM is a HELL! NO WATER NO FOOD NO ELECTRICITY NO COMMUNICATION!!

‘They are completely isolated and there are CRIMINALS carrying GUNS AND KNIVES SHOOTING and looting all over!! NOTHING IS WORKING, THERE ARE NO RULES, THERE IS NO LAW AND NO PROTECTION RIGHT NOW!!’ he said.

At the Simpson Bay Resort and Marina, looters went in to unoccupied rooms to steal TVs, one staff member said on Twitter.

‘A small minority of sxm-er’s were looting our unoccupied rooms until the Dutch military arrived. Not essentials – taking TV’s,’ he said.

The same man said a bank was robbed the next day.

Laura Conroy’s family were stranded on the island and are now awaiting rescue from US military planes. 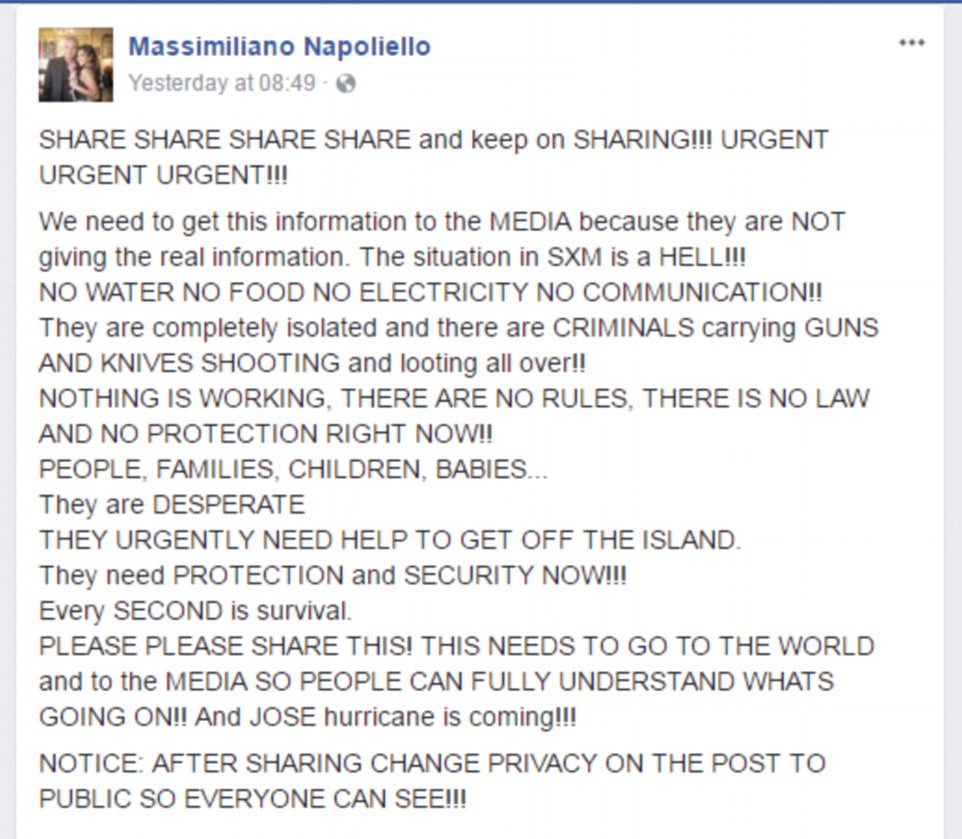 Massimiliano Napoliello, the general manager of Sky Beach, a bar in Maho Beach, shared this desperate plea on Friday 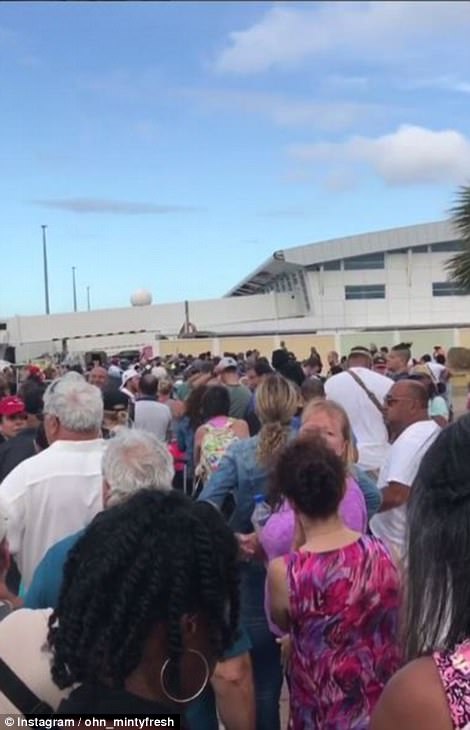 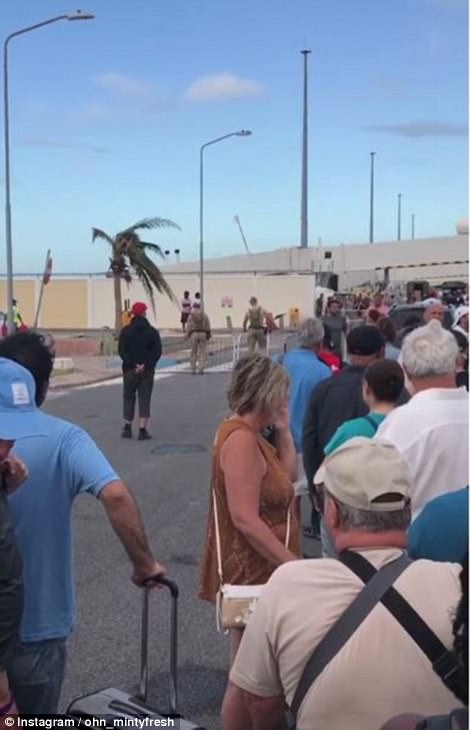 They are taking American citizens to the more developed Puerto Rico.

She said that through the intermittent contact she has had with her sister, she learned that looting was a problem. ‘Many US citizens are being attacked and robbed,’ she told DailyMail.com.

Witnesses on the Dutch side of the island say people are roaming the streets armed with ‘revolvers and machetes’ while Rutte said most people are surviving without power and running water.

Extra troops and police are arriving on the southern part of the island, which is shared between France and the Netherlands, and part of their job is to help keep order, officials said. 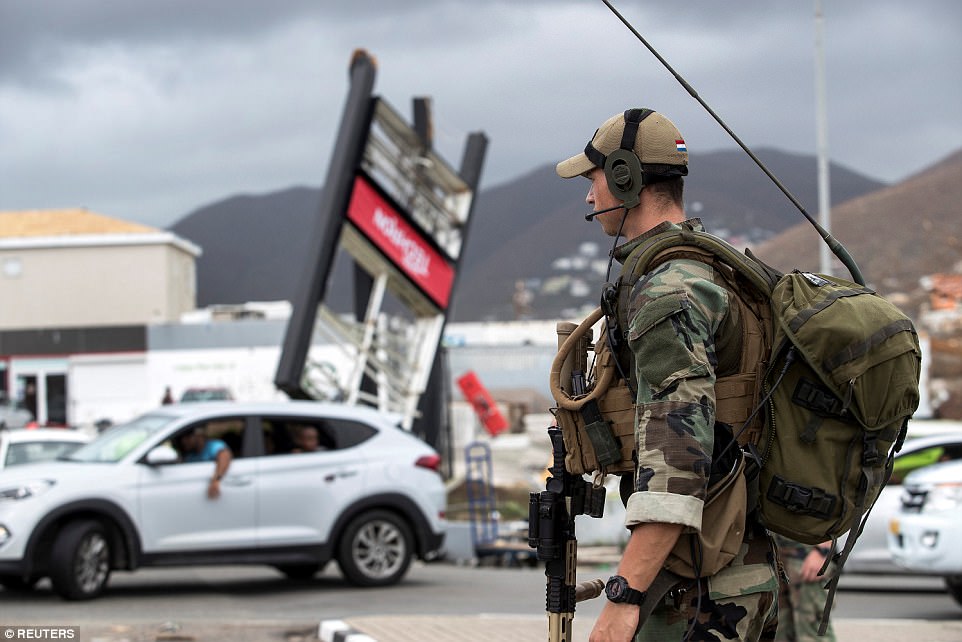 Dutch Prime Minister Mark Rutte warned the situation was already ‘serious’ and made worse by communication problems after 185mph Irma laid waste to infrastructure. A Dutch soldier keeps watch on the island 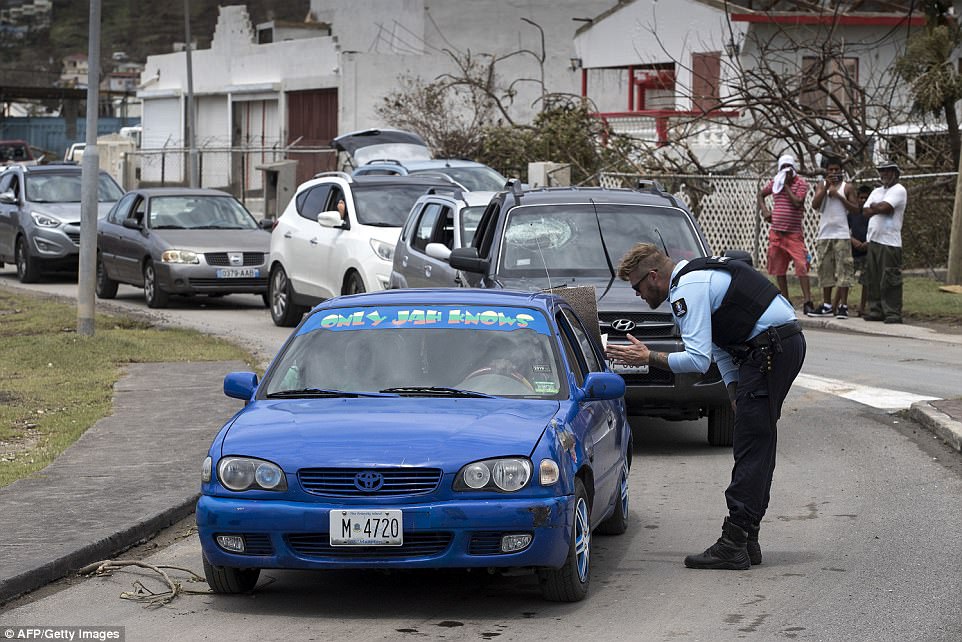 Witnesses on the Dutch side of the island say people are roaming the streets armed with ‘revolvers and machetes’ while Rutte said most people are surviving without power and running water. A Dutch Royal Navy officer speaks to a driver at a check point on the island 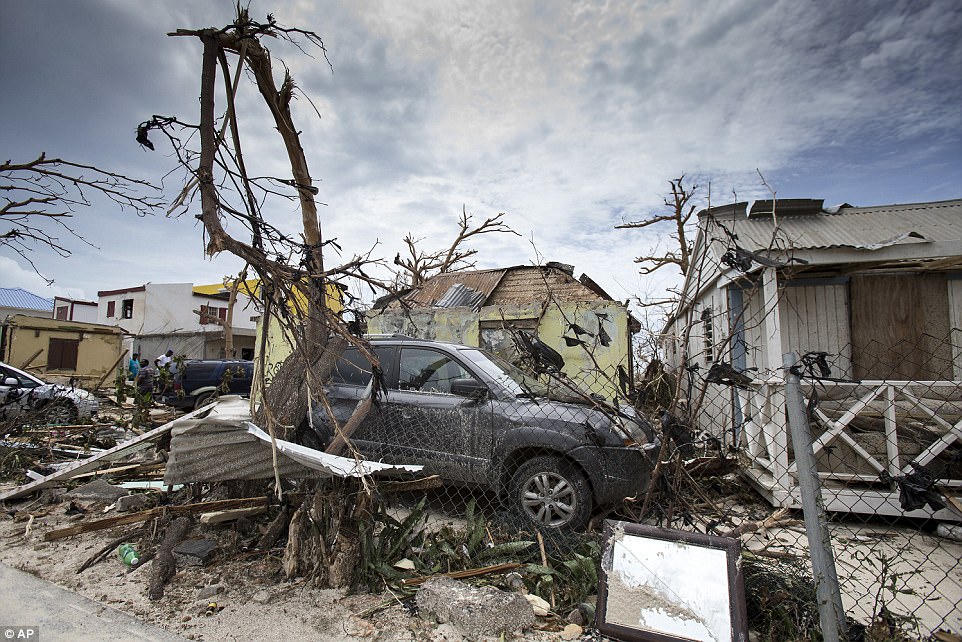 Up to 95 per cent of the island was destroyed as the hurricane pummeled its shores on Wednesday.

The badly damaged airport and port have now ‘been opened for military purposes,’ Rutte told reporters, adding ‘we are doing everything possible to get aid to the area.’

He said food, water and security were the priorities on the island, known in Dutch as Sint Maarten.

‘We will not abandon Sint Maarten,’ he said, adding that officials were also sending medicines, tents, tarpaulins and hygiene kits as fast as possible to the Caribbean.

‘The military has two tasks after arriving there. Firstly to ensure that there is food and water, but also to ensure security,’ Rutte said. 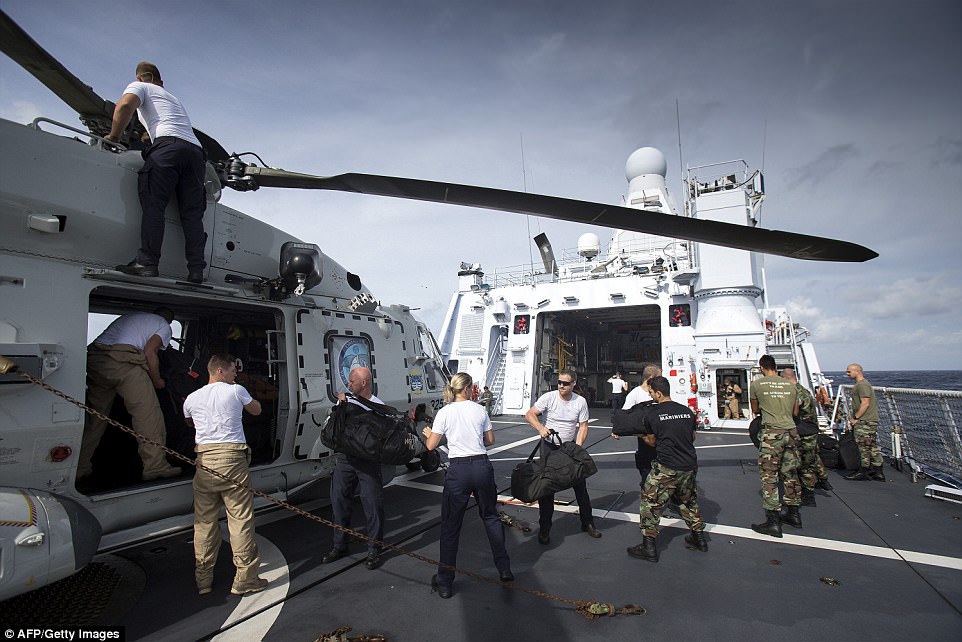 Extra troops and police are arriving on the southern part of the island, which is shared between France and the Netherlands, and part of their job is to help keep order, officials said 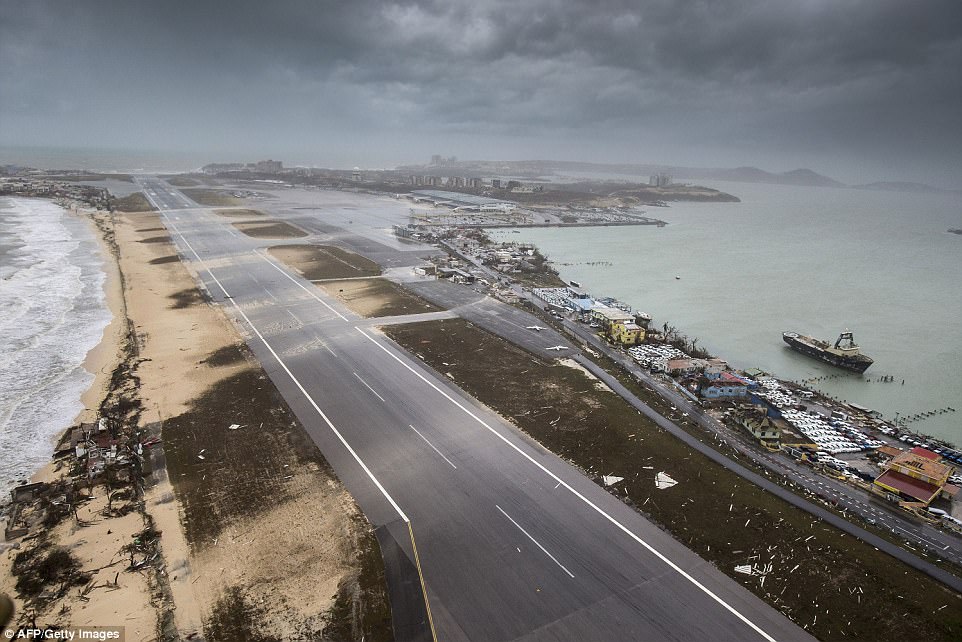 ‘There are people on the streets armed with revolvers and machetes,’ one witness told the Dutch newspaper AD on Friday. ‘The situation is very serious. No one is in charge.’

Dutch officials have confirmed that one person was killed on the Dutch part of Saint Martin by the Category Five storm, before it was downgraded early Friday to a four as it barrelled towards Cuba and Florida.

The tiny country, which shares an island with the French territory of St. Martin, has been autonomous since 2010, but remains part of the Dutch commonwealth. 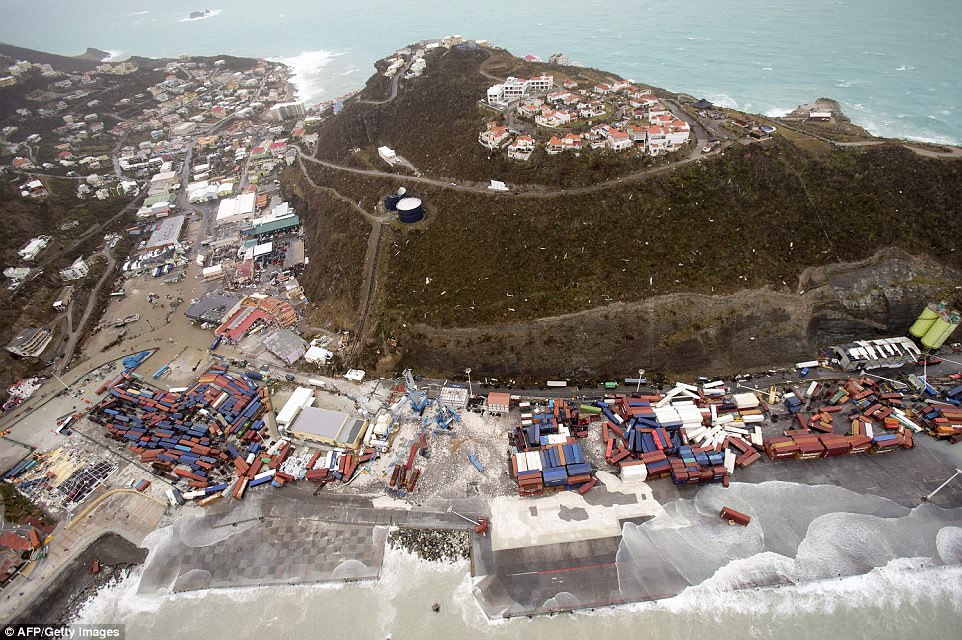 Dramatic aerial pictures show scenes of devastation on a Caribbean island after it was ravaged by the most powerful hurricane the Atlantic has ever seen. At a port area, shipping containers were strewn like children’s building blocks (pictured) 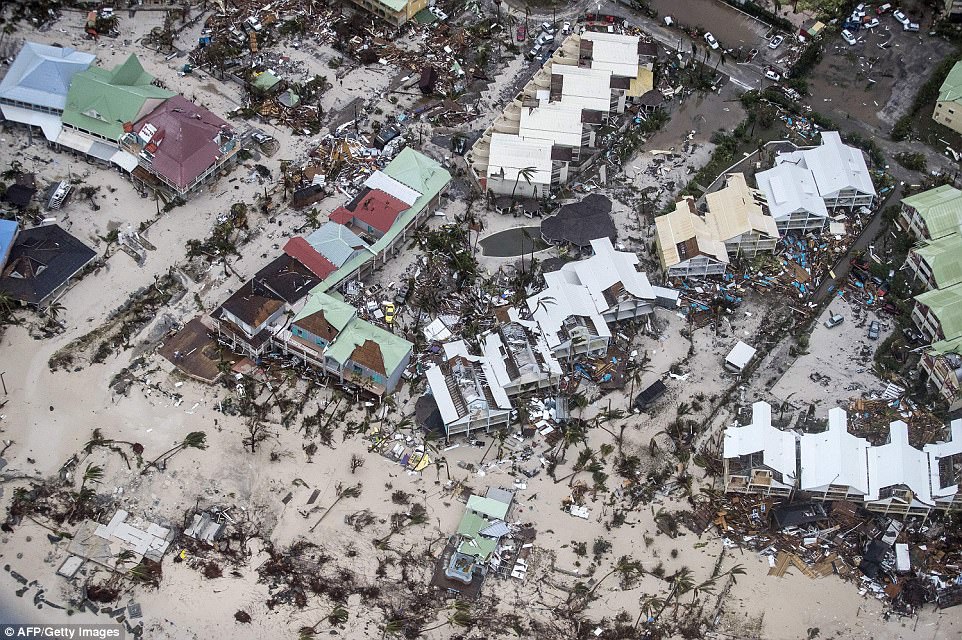 Astonishing images show the scale of the destruction on the island of St. Maarten in the aftermath of a direct hit by Category 5 Hurricane Irma 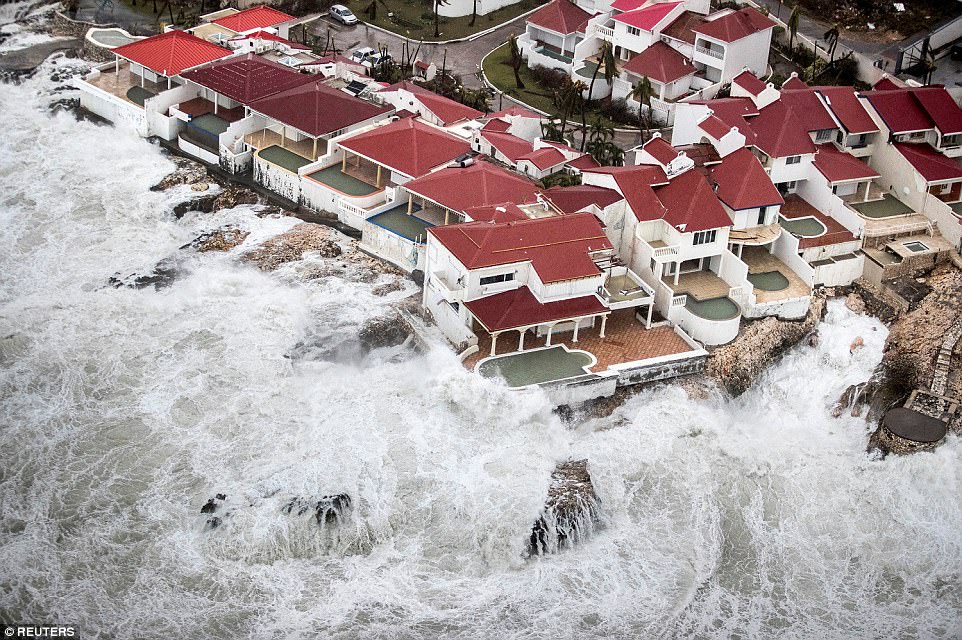 Prime Minister Mark Rutte says that most people are surviving on the island without the basic necessities of life.

Power, running water and most communications were knocked out by the powerful storm and looting has been reported by local authorities struggling to keep control of the island.

He said the first plane already has landed at the airport in the capital, Philipsburg, and navy vessels have unloaded vital supplies in a race against time before the next storm arrives.