RICHARD LITTLEJOHN: Government insists no hard border in Ireland but there will be one in Kent

The Government keeps insisting that there’ll be no hard border in Ireland when the Brexit transition period ends. But there will be one in Kent, apparently.

Lorry drivers will need a permit to enter the county to prove they have the correct EU customs documentation.

The measure has been drawn up to avoid congestion at the ports of Dover and Folkestone and the Eurostar terminal at Ashford.

Regardless of whether or not there’s a trade deal, the Government fears the EU’s intention to check all goods from Britain will lead to tailbacks of up to 7,000 lorries on major roads to the coast.

Funny how the French authorities plan rigorously to inspect every truck arriving at Calais from the UK but are unable or unwilling to stop tens of thousands of migrants heading in the opposite direction.

Still, if British drivers don’t have the right papers, they could be turned back, clogging cross-Channel crossings.

Ministers have decided that the best way to avoid chaos at the ports is to issue all lorries entering Kent with a special pass.

Michael Gove, the man in charge of preparations for our departure from the single market, warns that too few exporters have made the necessary arrangements to ensure smooth passage into Europe.

He’s also worried that ‘our neighbours will decline to be pragmatic’. In other words, the EU intends to make our lives as difficult as possible.

They hate the idea that Britain will be successful outside the European bloc and are determined to cause maximum disruption, despite our Government offering not to erect any barriers to free trade.

Predictably, our goodwill has not been reciprocated by ‘our neighbours’.

Instead of acknowledging the United Kingdom as a sovereign nation, EU negotiators, under that dismal technocrat Michel Barnier, still think they can treat us as supplicants.

Look at the way they refuse to give us the same kind of trade deal they have already agreed with other independent countries like Canada.

They’re trying to force us to submit to the continued jurisdiction of the European Court and are demanding unrestricted access to our fishing waters as the minimum price of any trade deal.

Two can play at that game.

Ministers should respond by guaranteeing retaliation if our exports are deliberately impeded. 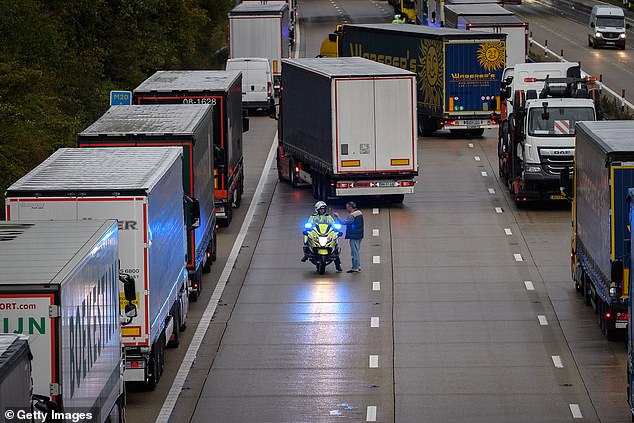 Regardless of whether or not there’s a trade deal, the Government fears the EU’s intention to check all goods from Britain will lead to tailbacks of up to 7,000 lorries on major roads to the coast

The EU must be left in no doubt that we will turn back every truck carrying French cheese, Italian wine and thousands of other European products — at least until they have been subjected to months of scrutiny by customs officers and trading standards inspectors at a dedicated new port of entry on Hayling Island.

A trade war is in nobody’s best interests, but don’t bet against the EU bureaucracy being ready to self-harm simply to damage Britain as a warning to any other country considering breaking free.

While Gove is right to put precautions in place, it’s depressing to hear one of the politicians who led the official Leave campaign spouting Project Fear-style propaganda.

Among the scare stories put about by Remain was that post-Brexit Kent would be turned into a giant lorry park.

It still may not happen. In fact, it probably won’t.

But even if the EU fails to create a border between Britain and Northern Ireland, who could possibly have thought they’d succeed in forcing the Government to issue permits to lorry drivers entering Kent from elsewhere in England?

Yet given the authoritarian pig’s ear ministers have made of the Covid crisis, we’ll probably end up with Army checkpoints at the mouth of the Dartford Tunnel and £10,000 fines for drivers who try to cross into Kent without the proper papers.

This all sounds a bit Passport To Pimlico, the glorious 1949 Ealing comedy about an area of London which broke free of British rule after discovering evidence that it was legally part of the historic House of Burgundy.

Just think of the limitless possibilities of a Free Kent, under a provisional government in Royal Tunbridge Wells.

No social distancing, no face masks, no curfews, no officious hi-viz Covid marshals prowling the streets, handing out spot fines.

No nosy neighbours grassing you up to the Old Bill. No WFH.

Pubs and restaurants could open all hours and serve as many customers as they can accommodate.

You could hug your grandchildren and no one would be able to tell you how many people you can meet in your own home.

Theatres and nightclubs would be packed. Crowds would be allowed back at football matches and race meetings.

Tourists and investors would flock to the Garden of England.

Margate would soon become the most popular staycation spot in Europe, not just the destination of choice for Jolly Boys Outings and drunken hen nights.

Airbnb would be inundated with requests for oast houses to rent. The traditional hop fields of Darling Buds Of May country would be revived.

The government in Tunbridge Wells could even issue its own reserve currency, backed up by several tonnes of gold bullion never recovered from the Brink’s- Mat robbery and still believed to be buried deep in the Kent countryside.

Soon Kent would be the most fashionable province in Europe. Folkestone and Dover would become bustling freeports.

Manston Airport would expand to replace Heathrow as an international hub — and in no time Michel Barnier would be flying in to beg for a free trade agreement between Kent and the EU.

IT’S ABOUT THE MONEY, HONEY!

A female security guard from Northern Ireland has been awarded £10,900 after winning a sexism claim against her male boss.

She objected to him calling her ‘honey’. A tribunal agreed, ruling that ‘Addressing women as ‘honey’ is patronising, demeaning and degrading.’

Really? I know I should get out more, but I’ve never heard any woman in Britain being called ‘honey’. Sweetheart, darlin’, love, pet, certainly. But not honey.

Honey, or hun, is an American term of affection, used by both sexes. Why would anyone consider it patronising, demeaning and degrading?

Anyway, there goes another harmless word we must now add to the lexicon of hate speech. Who’s going to tell Winnie-the-Pooh?

If this fragile security guard was intimidated by being called ‘honey’, I hate to think how she’d have reacted if ever confronted by a couple of blaggers armed with a sawn-off Purdey.

Still, my guess is that this wasn’t really about honey — it was all about money.

The Government’s blunderbuss approach to the pandemic reminds me of the old story about the chap spotted roaming around Trafalgar Square with a giant, er, blunderbuss.

A copper asks him what the weapon’s for. ‘It’s an elephant gun, for scaring off elephants.’

‘But there aren’t any elephants round here,’ the copper says.

Where has the old Boris gone? That’s the question everyone keeps asking.

Mail reader Dave Preedy writes from Crewe to wonder what actually happened when Boris was admitted to hospital in April.

Did the mad scientists replace him with some kind of cyborg?

Dunno, but I think Dave may be on to something. Certainly the occupant of No 10 looks like Boris and sounds like Boris.

But he doesn’t act like the Boris we voted for.

In the 1962 movie The Manchurian Candidate, based on a novel by Richard Condon, Laurence Harvey plays a soldier who is captured by the Chinese during the Korean War.

While he’s in jail, he’s brainwashed and then sent back to America as a sleeper, before being reactivated to assassinate the nominee for President.

Have the Chinese got to BoJo? Did they somehow reprogramme him while he was in St Thomas’.

Think about it. He was determined to let Huawei build our 5G network until a Tory rebellion forced him to back down.

Since then he’s crashed the economy in response to a virus which originated in China — some suspect in a biological warfare lab — and imposed Beijing-style curbs on civil liberties.

If the Chinese intended to cripple the West as part of its bid for world domination, they couldn’t have asked for a better stooge.

Could Boris be our very own Manchurian Candidate?