RICHARD LITTLEJOHN: I have sympathy for Jeremy Corbyn

Are you sitting comfortably? Then I’ll begin. You may like to pour yourself a stiff drink. This is going to come as a shock.

For the first time in my life, I have some sympathy for Jeremy Corbyn. 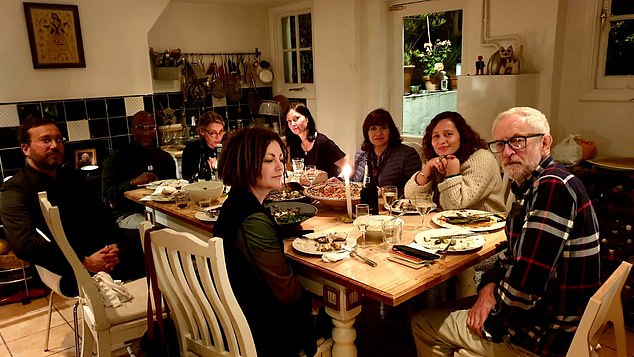 Jeremy Corbyn, pictured right, was accused of breaching lockdown rules by attending this dinner party with eight other people 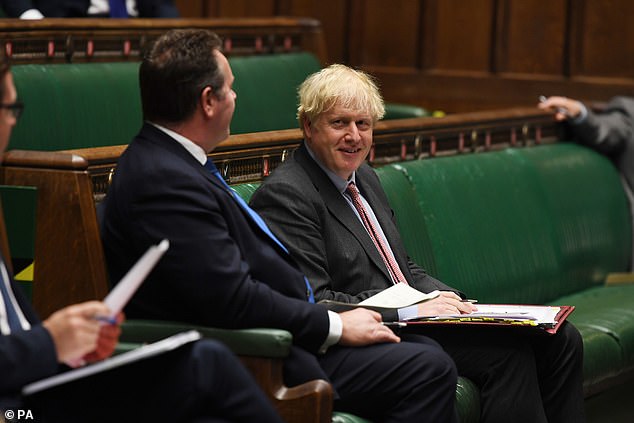 Prime Minister Boris Johnson, pictured at PMQs yesterday, was himself confused over the rules he had introduced

The former Labour leader faces a fine of £200 after being photographed at a dinner party for nine — a clear breach of the Government’s Rule of Six.

Under anti-Covid laws, gatherings of more than six people in a private home are illegal, unless they all live in the same house.

The photo was taken at a friend’s home, so he’s bang to rights. Put your cycle clips on, chummy, you’re bleedin’ nicked.

Corbyn is one of eight diners sitting around a table laid for nine. Presumably, the picture was taken by the other guest, although how it ended up in the papers remains a mystery.

As well as Corbyn and his wife, the people at the party in Islington are described as Left-wing activists, film-makers and artists, so you can’t imagine any of them grassing him up to the hated tabloid Press.

But you never can be sure. Maybe one of them is an MI5 agent. It can’t be a coincidence that the dinner party sting happened on the same day Corbyn’s brother Piers was fined £10,000 for organising an anti-mask rally in Trafalgar Square.

No doubt a full-scale, Momentum-led mole hunt is under way

Just because you’re paranoid, it doesn’t mean they’re not out to get you.

Still, once I stopped laughing I began to consider the sinister implications of this story. OK, so a quinoa casserole in the company of a crowd of sour-faced Toytown Trots isn’t exactly my idea of a night out, but I don’t begrudge Corbyn and his comrades their Fairtrade fun.

The idea that they can be fined a collective £1,800 for the privilege is scandalous. They are all consenting adults and know the risks from coronavirus. No government should ever be able to dictate who you can entertain in your own home.

What disappoints me is that Corbyn has meekly accepted his punishment. ‘I recently had a dinner at a friend’s house where the number of guests eventually exceeded five,’ he said. ‘I understand that remaining at the dinner was a breach of the Rule of Six. I apologise for my mistake.’

Is he really trying to convince us that this was all an unfortunate misunderstanding? When he saw the kitchen table was laid for nine, how many guests did he think would be sitting down to eat?

Was he supposed to leg it once he’d done a quick head count?

Maybe he was genuinely confused about how to interpret the new law. Would they have been in breach of the Rule of Six if three of the guests had eaten their meals at a picnic table just outside the back door? Frankly, who knows? The regulations vary from country to country, from region to region, from town to town, and in some areas from street to street.

For instance, in most of the North-West, the Rule of Six applies. You can meet friends in a pub or restaurant, but not in your own home or garden.

You can have 15 people at a wedding and 30 at a funeral — except in Bolton, where the limit is just six and pubs and restaurants are closed.

In the Wirral, the Rule of Six applies to everyone. But over the border in North Wales, children under 11 are exempt and you can have 30 people at a wedding, provided they wear masks.

You can drive from the Wirral to North Wales, but not from North Wales to the Wirral. If you want to carry on drinking after the 10pm curfew, you could always take a private jet to Northern Ireland, where the pubs don’t close until 11pm. With luck, you’ll make it in time for last orders.

In the North-East and Liverpool, six people can play organised sport indoors, but only if they all come from the same household. How’s that going to work then?

Needless to say, in Scotland the rules are different again. Only non-contact sport is permitted indoors. So, presumably, snooker is OK, but not boxing. Mind you, in Glasgow, snooker can be a contact sport, too, especially after a few pints of heavy.

Wee Burney won’t let you entertain friends in your own home, and only two households are allowed to meet outside. In Scotland, the Rule of Six exemption applies to children under 12, not 11.

Why? Your guess is as good as mine. Confused? You’re supposed to be. Not even Boris Johnson appears to a have clue about what’s going on locally, as he demonstrated this week. And by the time you read this, the rules may well have changed again, as more areas are plunged into local lockdown.

Watching the 24-hour news channels is like following the football score updates on Soccer Saturday, as the names of towns and cities added to the list by scaremongering Health Secretary Matt Hancock scroll across the bottom of the screen.

Yesterday it was the turn of Liverpool, Middlesbrough, Hartlepool and Warrington.

Maybe Hancock fancies himself as Covid’s answer to Sky’s Jeff Stelling. ‘There’s been another confirmed case of coronavirus on Merseyside. Let’s go live to our Covid Marshal on the spot . . .’

The absurd Hancock is now warning that ‘hundreds of thousands’ will die unless we follow the rules to the letter. But apart from a handful of Tory backbenchers, no politician is speaking out against this madness.

This could have been Corbyn’s moment in the sun. I’d have been far more impressed if he’d declared he would rather go to jail than pay any fine. That’s what the old firebrand Corbyn would have done. He could have become Britain’s first Covid Lockdown Martyr.

And as he was dragged off to the Scrubs, he could have denounced the Tory tyranny and vowed to carry on defying the Rule of Six, insisting that in a free country:

Dinner parties are for the many, not the few . . .

You dirty old man, that’s Strictly out of order

Graham Norton has apologised for a ‘throwaway’ remark he made about not wanting to see two men dancing together on Strictly.

He told a magazine that same-sex couples would only confuse the judges because they wouldn’t be able to compare ‘like with like’.

Even though Norton has backtracked, I think he was on to something. When I heard that two men could be tripping the light fandango, I couldn’t help thinking back to an old episode of Steptoe & Son. Harold is courting a girl who is a keen ballroom dancer. He leads her to believe he’s a champion dancer and allows her to enter them in a competition. 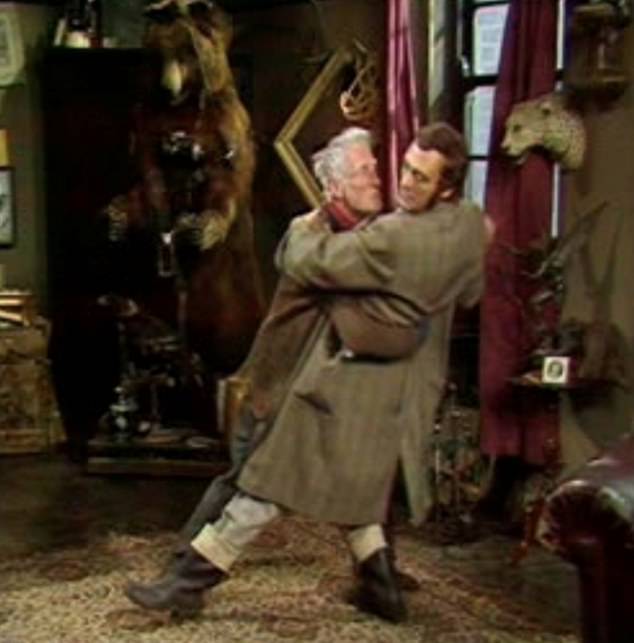 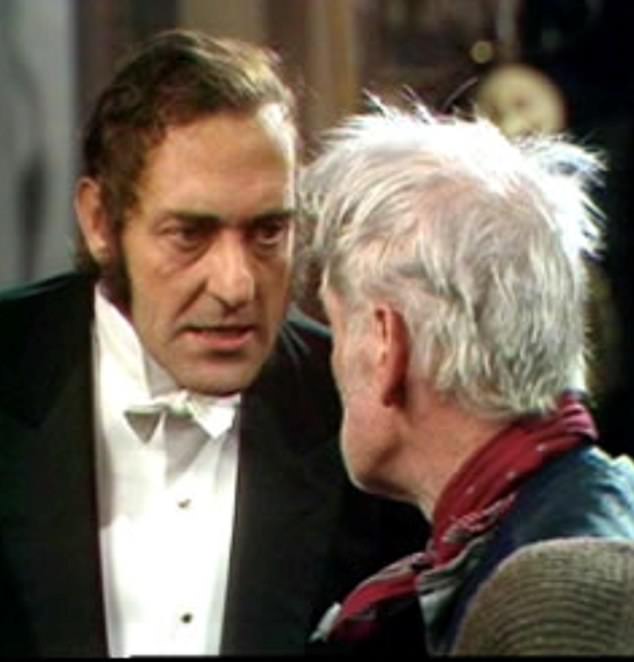 When I heard that two men could be tripping the light fandango, I couldn’t help thinking back to an old episode of Steptoe & Son

After a crash course in the waltz and the tango, Harold heads off full of confidence. He returns crestfallen, face like thunder. ‘We were disqualified,’ he says. ‘It’s all your fault, you taught me the woman’s steps, you daft pillock.

‘We took to the floor, the band struck up — and we both danced backwards. We ended up opposite ends of the ballroom and the band couldn’t play for laughing.

‘She burst into tears and her mother belted me round the earhole with a rolled-up copy of the Ballroom Gazette.

‘Eight days of non-stop practice and what’s the result? The only person I can dance with is you!’