The right to protest peacefully is an essential freedom in any democratic society. The right to make the lives of your fellow citizens a misery is not.

So let’s acknowledge that the self-styled environmental campaigners who took to the streets of London this week are perfectly entitled to promote their views.

What they’re not — or, at least, shouldn’t be — allowed to do is close roads and bridges, bringing swathes of the city to a standstill.

In the process, they caused serious inconvenience to tens of thousands of people trying to go about their lawful daily business.

This is the group causing chaos on the Elephant and Castle roundabout in South London on Wednesday, including pop star Jim Davidson, who was on his way to Folkestone for a gig

All week, demonstrators have been descending on main road junctions and river crossings, staging sit-down protests aimed deliberately at causing gridlock. Tailbacks stretched for miles, from Tower Bridge to Heathrow.

To be fair to the police, they did make 82 arrests last weekend when activists targeted five bridges. Some of those who had their collars felt glued themselves to government buildings. In which case, why not just leave them there? Then we all could have gone along and thrown rotten fruit at them.

But it was the weekday, rush-hour road closures which created the most disruption.

Commuters and taxi drivers accused the police of indulging the demonstrators. Scotland Yard even put out a statement advising people not to travel by car or motorbike, adding that ‘attempting to drive through protesters in the road is dangerous and illegal’.

So is blocking the road. It is a criminal offence, punishable by a £50 fine. Not nearly enough, if you ask me. Surely the advance warnings should have been directed at those planning to cause as much chaos as possible — not at law-abiding motorists. 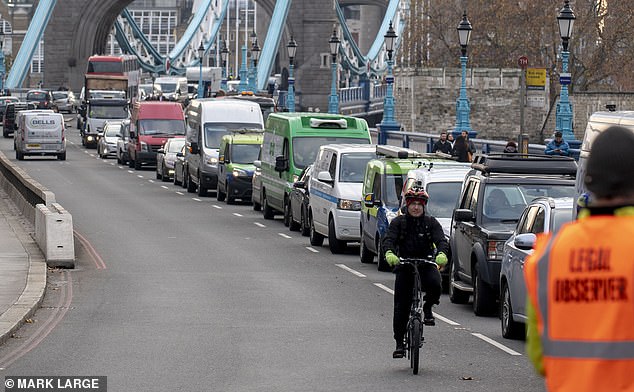 How many people were late for work, how many children were late for school? How many important business meetings were cancelled? How many long-awaited GP and hospital appointments were missed? More to the point, what the hell was all this disruption supposed to achieve? We’re still none the wiser.

The organisers say they want to put pressure on the Government to do more to tackle climate change. What, for instance? That’s the question LBC Radio’s Nick Ferrari put to one of the ringleaders, Roger Hallam, from an outfit calling itself Extinction Rebellion.

What precisely should Britain do? Er, cut carbon emissions by 2025, Hallam said, accusing the Government of ‘criminal inaction’ to prevent the polar ice caps melting. Ferrari tried to pin him down on specifics. Did they want to ban cars, perhaps? Should everyone be forced to travel by bicycle?

When Hallam declined to offer any solutions, Ferrari cut him off.

The only conclusion we can draw from all this is that the demonstration, like most of these self-indulgent demos, was simply about drawing attention to themselves. In this case, the protesters may claim to love the polar bears, but they clearly have little regard for their fellow citizens. 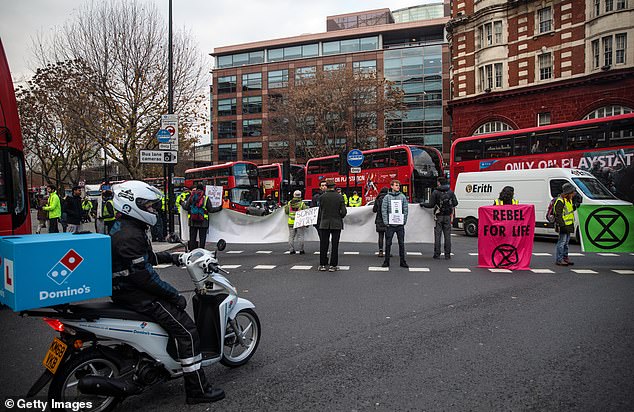 Protesters from the Extinction Rebellion group hold banners at Elephant and Castle on Wednesday. The organisers say they want to put pressure on the Government to do more to tackle climate change

Getting around London is already an ordeal — thanks, primarily, to the ludicrous and ruinously expensive network of largely deserted cycle lanes built in the name of, yes, tackling climate change. Did it not occur to Hallam and his fellow layabouts that if they want to save the planet, erecting human roadblocks is an inter-galactically stupid way of going about it?

Forcing cars, buses, taxis and emergency vehicles to sit in deliberately manufactured traffic jams, revving their engines, only increases the amount of exhaust emissions released into the atmosphere.

Lest you think this column is a little London-centric, there have already been smaller-scale Extinction Rebellion protests in Bristol, Manchester and Glasgow. We can all brace ourselves for more of this kind of aggravation from the anti-car fanatics.

Look, I accept that the police have to perform a difficult balancing act. But their primary job should be to keep the roads open and the city moving. 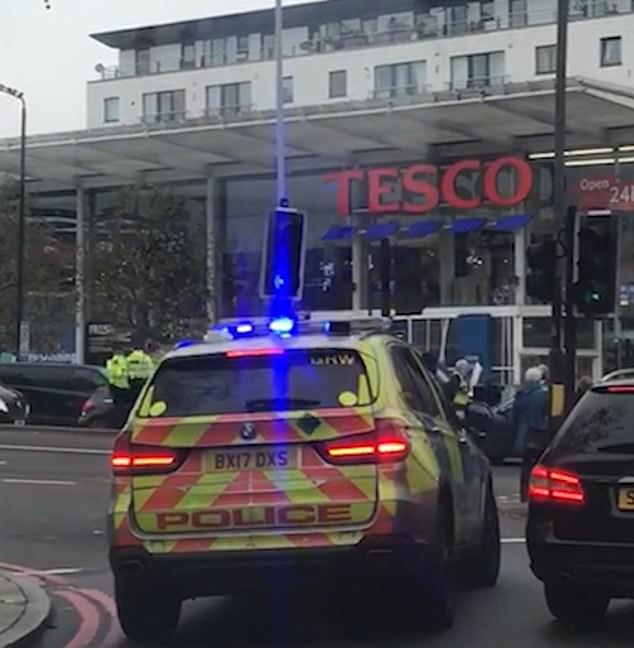 Climate change activists are blocking roads across London to cause gridlock. Pictured, one of the demonstrations on the A5 in London yesterday

They could have done with Boris Johnson’s water cannon, foolishly flogged off to the lowest bidder this week.

Though tempers were understandably frayed, drivers and passengers caught up in the chaos acted with commendable restraint. How much longer the peace can be maintained if these protests are to become a regular occurrence remains to be seen.

Comedian Jim Davidson, once a staunch supporter of police charities, had a few choice words with officers on the scene after being stranded by the protest at the busy Elephant and Castle junction in South London. 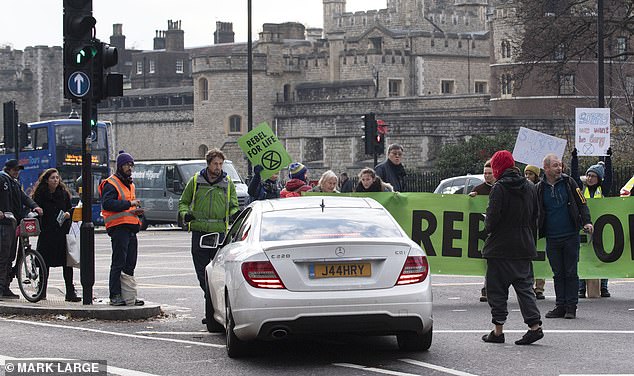 Meanwhile, at Tower Bridge, a geography student who stood in the road, waving a banner and blocking traffic, claimed that former Tory attack dog Norman Tebbit, now 87, drove slowly into her, brushing her leg. ‘He looked incredibly angry,’ she complained. ‘He was mouthing things at me through the window.’

Can anybody blame him? Instead of moaning, she should reflect that she may have had a lucky escape.

Back in the Eighties, when he was known as the Chingford Skinhead, Norman was instrumental in smashing Arthur Scargill’s flying pickets during the miners’ strike. In those days, I couldn’t imagine him letting a bunch of soppy student activists stand in his way, let alone shut down half of London.

Bring on the water cannon!