Greater Western Sydney’s club song, ‘There’s a Big Big Sound,’ has gone viral in the lead up to the AFL grand final on Saturday – spawning scores of memes.

Saturday’s match against Richmond will be the GWS Giant’s maiden grand final appearance – having been founded just a decade ago.

Punters have enthusiastically thrown their weight behind the song against the Tigers’ popular and well known club song ‘We’re from Tigerland’ in the game’s lead up.

Greater Western Sydney’s club song has gone viral in the lead up to the AFL grand final (pictured; Jeremy Cameron and Indiana Putra arrive at the GWS Brownlow Medal function)

Audio of the song has been dubbed over famous scenes from Seinfeld, The Simpsons, and Peppa Pig.

From the West of the town

It’s the sound of the mighty GIANTS

You feel the ground A-SHAKING

The other teams are quaking

In their boots before the GIANTS

We take the longest strides

And the highest leap

We’re stronger than the rest

We’re the biggest and the best

And we will never surrender

We’ll fight until the end

We’re greater than the rest

It even has it’s own trending hashtag on Twitter with #bigbigsound.

The writer of the Giants’ catchy theme tune revealed this week that while the club owns the rights to the song he makes a cool $10 every time the Giants win a match – netting him $160 this year.

Harry Angus from Australian band The Cat Empire said he just ‘tried to obey all these rules of footy songs’ when writing the tune.

‘So you have got the middle brass chorus, they have got the men singing jauntily and all I really did was put it in a minor key. It went instantly Russian, which I didn’t realise at the time,’ Angus said on Channel 10.

‘I just wrote this little song, it was a bit of fun. I sent it in and I don’t think anyone else even sent a song in,’ he said.

‘But they liked my one that’s what we ended up with. The players seem to like it and I think it just needs a few years to sink into people’s consciousness. Then it just kind of fits in with the others because it sounds right.’ 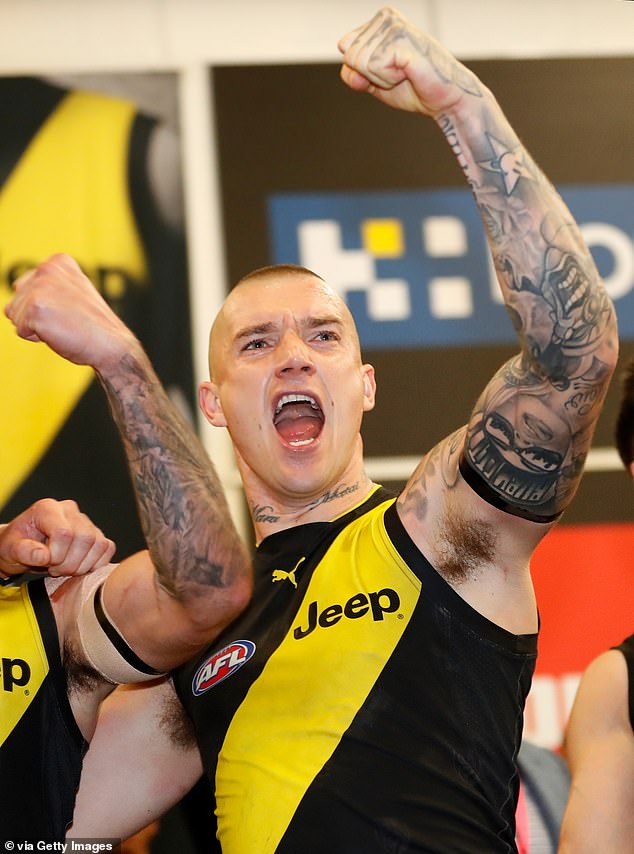 In any weather you will see us with a grin

If we’re behind then never mind

For we’re from Tigerland

We never weaken til the final siren’s gone

For we’re from Tiger

The Richmond Tiger’s theme song is widely considered one of the best in the AFL, regularly topping polls of the most popular club song.

The tune’s second last line, the refrain of ‘Yellow and Black’ is particularly embraced among fans.

Both clubs were allocated just 17,000 tickets as is the tradition for an AFL grand final.

However, with Richmond having 103,000 members and the Giants having 30,000 some fans voiced their anger over the limited tickets to scrap over.

The fact non-competing clubs are also allocated a large number of tickets was a point of annoyance for Tigers fans.

The AFL grand final will kick off at 2.30pm on Saturday at the Melbourne Cricket Ground.

Richmond will be aiming to win their 12th title while GWS are eager for their first.

Richmond had endured a more than 35 year drought in premierships before winning in the 2017 grand final.