Former Pennsylvania Sen. Rick Santorum suggested that the students who took to the streets Saturday to protest in support of stricter gun laws would be better served learning something like CPR to prepare them for the next mass shooting.

‘How about kids, instead of looking to someone else to solve their problem, do something about – maybe taking CPR classes or trying to deal with situations that, when there is a violent shooter that you can actually respond to that,’ Santorum, a Republican, said Sunday on CNN’s State of the Union.

Santorum, who got voted out of office in 2006, tried to suggest that those who participated in Saturday’s ‘March for Our Lives’ across the country weren’t taking appropriate actions because they were merely asking lawmakers to pass ‘phony’ gun laws.

Former Pennsylvania Sen. Rick Santorum is getting hammered by gun control activists by suggesting students would be better served learning CPR – in preparation for the next shooting – as opposed to protesting in order to enact stricter gun laws

Activist David Hogg also chimed in suggesting that the NRA might need CPR performed on it after this November’s midterm elections. Hogg and other Parkland, Florida student activists have called on Americans to vote out lawmakers not in support of stricter gun laws 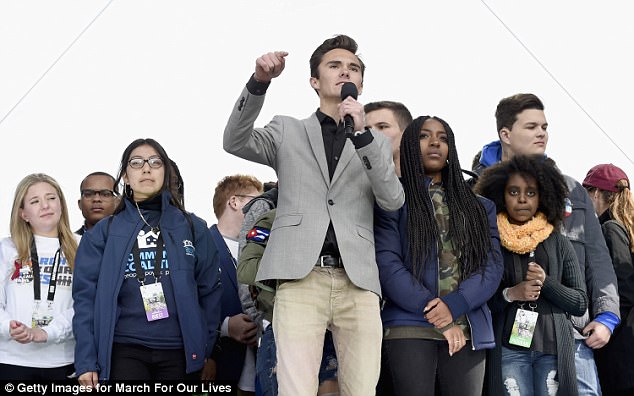 ‘They took action to ask someone to pass a law,’ Santorum pointed out to host Brianna Keilar. ‘They didn’t take action to say, “How do I, as an individual, deal with this problem? How am I going to do something about stopping bulling within my own community? What am I going to do to actually help respond to a shooter?”‘

CNN’s Van Jones, who was part of the panel discussion, noted how his son was about to be high school age.

‘I want him focused on algebra and other stuff,’ Jones argued. ‘If his main way to survive high school is learning CPR so when his friends get shot … that to me, we’ve gone too far.’

The former Pennsylvania senator agreed, but continued to make his point.

‘I’m proud of them, but I think everyone should be responsible and deal with the problems that we have to confront in our lives. And ignoring those problems and saying they’re not going to come to me and saying some phony gun law is gonna solve it,’ Santorum continued. ‘Phony gun laws don’t solve these problems.’

He also suggested that a much broader discussion about school safety was needed beyond all the talk of guns.

Santorum’s comments immediately got noticed by Everytown for Gun Safety program manager Erica Lafferty, whose mother Dawn Lafferty Hochsprung had been the principal of Sandy Hook Elementary School, and died defending her kids.

‘Rick Santorum’s words are an insult to the kids of Parkland, my family and to the countless others who have had loved ones taken by gun violence,’ Lafferty said in a statement Sunday.

‘My mother was killed while protecting her students at Sandy Hook School. For anyone to suggest that the solution to gun violence is for kids to learn CPR is outrageous, and indicative of the NRA’s desire to do or say anything except strengthen America’s weak gun laws,’ Lafferty said.

Santorum’s comments also got the attention of Marjory Stoneman Douglas senior David Hogg, one of the most vocal students to survive the Parkland, Florida, Valentine’s Day massacre.

It was Hogg and his classmates who organized Saturday’s rallies.

Hogg and other Parkland, Florida student activists have called on Americans to vote out lawmakers not in support of stricter gun laws.