A gulf between the number of house hunters in the market and properties for sale has grown to the widest in eight years.

House prices jumped sharply again in May, according to its member estate agents, as a ‘real mismatch’ between the supply and demand of homes continues to afflict the property market.

However, Rics said that current sales boom is not expected to last once the stamp duty holiday ends, as estate agents’ sales expectations for the coming twelve months have now turned flat.

‘This suggests that the Stamp Duty holiday is the primary driving force behind the latest market trend,’ Rics noted.

Michael Darwin, an estate agent and surveyor in Northallerton, North Yorkshire, said that demand still exceeded supply – and that for the first time in 40 years, they had all of their property ‘either sold or under offer’.

Chris Stonock, an estate agent and surveyor at Your Move in County Durham and Tyne and Wear, said it was still very much a sellers’ market with not enough stock of homes to meet rising demand.

He also noted that the pipeline of sales currently being processed was at levels he had not seen in 15 years, echoing a recent report by Rightmove, which said it is seeing the biggest sales logjam in a decade. 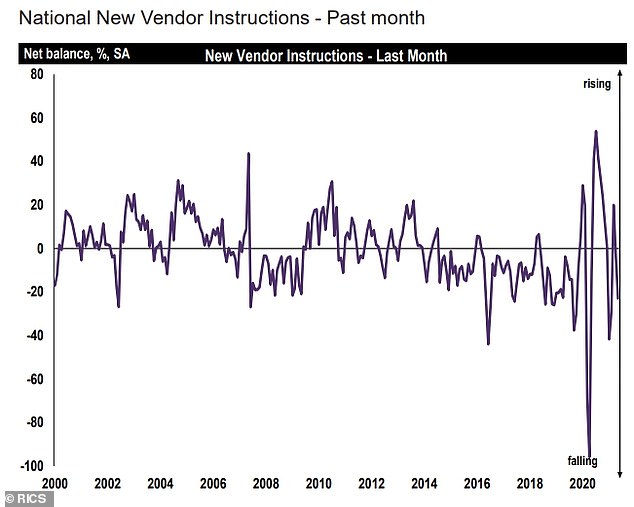 Rics’ chart shows a drop in new homes coming to the market, with the reading below zero 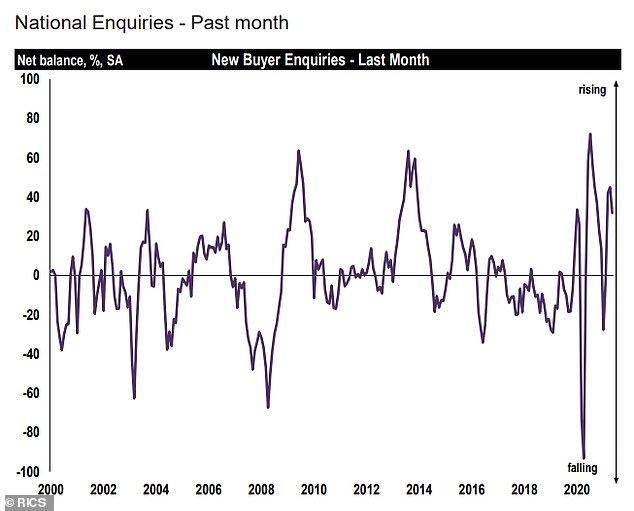 Regardless of a slowdown in sales brought about by the end of the stamp duty holiday, prices will keep on rising as the imbalance between supply and demand is set to continue, according to Rics.

The upward pressure on house prices intensified last month, with 83 per cent of estate agents noting an increase rather than a decrease, up from 76 per cent the previous month.

Agents also anticipate that prices will rise for the year ahead, as 64 per cent more respondents expect an increase. 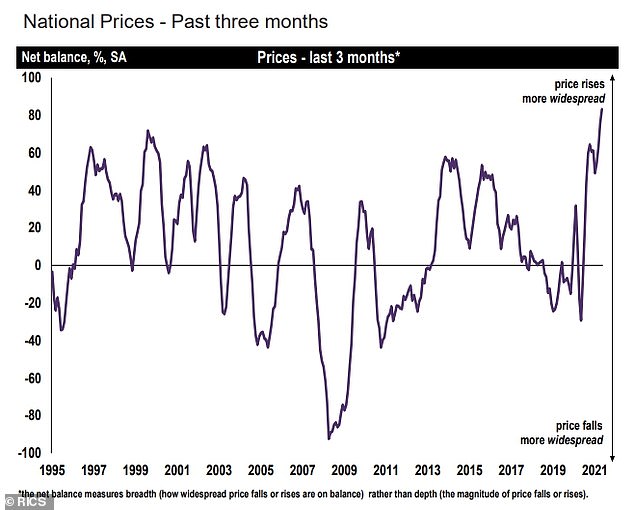 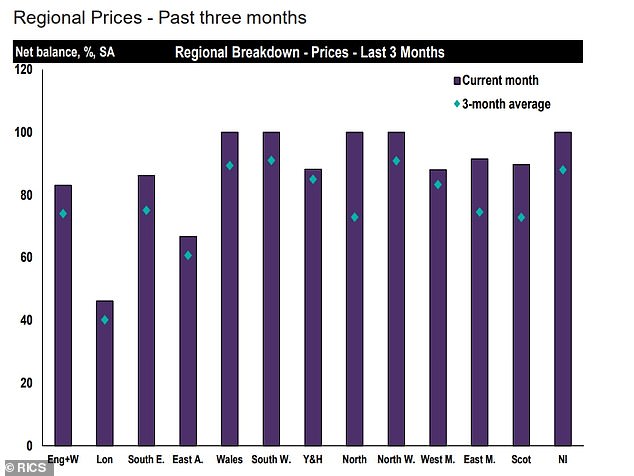 Simon Rubinsohn, Rics chief economist, said: ‘Ending a tax break always has the potential to be a little disruptive for a market but with the economy performing better than could have been expected even a short while ago and the cost of money still at rock bottom levels, the principal drivers supporting demand will remain in place even after the expiry of the stamp duty holiday.’

All parts of the UK continue to display strong feedback regarding house price growth, with exceptionally sharp readings being posted in Northern Ireland, the South West and North West of England, and Wales, Rics said. 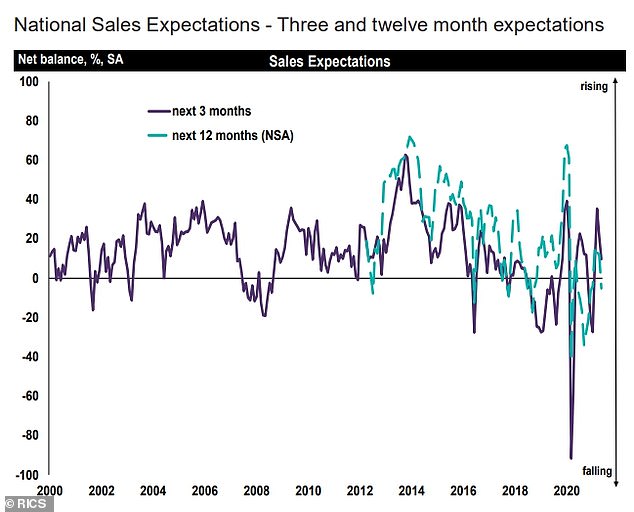 Kevin Burt-Gray, an estate agent and surveyor at Pocock & Shaw in Cambridge said they had a ‘very busy’ past few months ‘with resultant increase in property prices’.

‘Difficult to predict market for the rest of year but activity has dropped off as we approach the end of the stamp duty holiday,’ he added.

He also noted that smaller one and two bedroom apartments are still proving slow to sell as much of the property boom is being driven by people looking for larger homes with outdoor space as a result of the pandemic.

Chris Gooch, of estate agents Carter Jonas in Winchester, said: ‘With supply tight, prices are increasing, especially for country housing and we expect this to continue despite the SDLT holiday phasing out.’

In May, a net balance of +48 per cent of estate agents reported a rise in demand for rental properties.

However, the balance of new rental properties being listed continued to fall for the tenth consecutive month.

This imbalance, as in the case for house prices, has led to 55 per cent more agents predicting rents to rise in the coming three months.