Riggleman: My MOM texted me and said ‘I’m sorry you were ever elected’ after Trump criticism

Former Republican Rep. Denver Riggleman said his mom practically disowned him after he criticized former President Donald Trump for retweeting a QAnon believer’s account on CNN before the 2020 election.

‘You are now part of the swamp…I’m sorry you were ever elected…You are officially a politician…I have cried over you and my heart is broken by you,’ Riggleman wrote his mom texted him in his forthcoming book, The Breach: The Untold Story of the Investigation into January 6th.

The Hill newspaper obtained an early copy of the book, where Riggleman wrote about his mom’s reaction to him becoming a public critic of the ex-president over Trump’s habit of pushing conspiracy theories.

During the October 2020 interview with CNN’s Jake Tapper, Riggleman called it a ‘dangerous tweet’ after Trump shared a post promoting a conspiracy theory about the Bin Laden raid making its way through QAnon circles.

‘What will it take to wake you up son….I love you so, but cannot stand by and listen to your elitist attitude and being praised by elitist journalist and democrats,’ he said his mother texted him after his CNN appearance.

Former Republican Rep. Denver Riggleman said his mom practically disowned him after he criticized former President Donald Trump for retweeting a QAnon believer’s account on CNN before the 2020 election 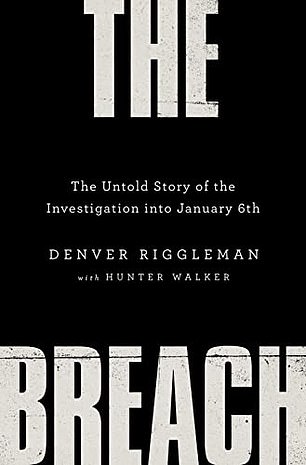 Denver Riggleman’s book, The Breach: The Untold Story of the Investigation into Janyary 6 will be released Tuesday

Prior to the CNN appearance, Riggleman had co-sponsored a House resolution condemning QAnon, which received bipartisan support, but 17 Republican no votes.

On CNN, he called some of the theories being floated by QAnon adherents ‘bats**t crazy.’

‘I knew my mom and I were not on the same page politically, but this is something else,’ Riggleman said. ‘Any hope for a mostly normal relationship seemed dim.’

‘She was damn near disavowing me,’ he added.

Riggleman wrote that he and his mom’s relationship previously soured when he left the Mormon church.

They got closer when he entered Republican politics – unsuccessfully running for Virginia governor in 2016 and then beating Democrat Leslie Cockburn – who happens to be actress Olivia Wilde’s mother – during a colorful Congressional race in 2018.

Cockburn, among other things, charged Riggleman with being obsessed with ‘Bigfoot erotica,’ after he posted several funny drawings of the faux forest giant, including with genitalia, on social media.

Then in 2020, Riggleman lost a Republican primary in his rural Charlottesville, Virginia-area district after he officiated a same-sex wedding.

He’s since left the Republican Party.

‘My relationship with my mom made it through my break with her Mormon Church,’ Riggleman wrote. ‘I wasn’t sure if it would survive the Church of Trump.’

He said he believed that ‘the love for my mother and her love for me will overcome that. And it did overcome it.’

Riggleman also used his mother as an example of how ‘this sort of information warfare, this digital metastasization of crazy, can get everywhere, right?’

‘If it’s the president telling me and all the people around him it obviously [has] to be true,’ he said. ‘It’s just not, it’s hogwash.’

‘But what I wanted to explain to people is that there’s so many families that are almost in trauma, trying to talk to individuals about something that is is absolutely not true, right? It’s a falsehood. It’s just not true. There’s no – there’s no parsing it,’ he continued.

Riggleman’s new book is mostly about his experience serving on the January 6 House select committee, which he did after leaving Congress in January 2021 – concluding his service just three days before the Capitol attack.

Riggleman, who was formerly in military intelligence, served on the committee as a senior staffer from August 2021 until this April.

Riggleman said he left the GOP, in part, because of some of text messages he saw Trump-aligned officials sending due to his work on the January 6 committee.

‘If QAnon or these conspiracy theories have saturated the GOP at the highest levesl of leadership, I think maybe it’s time for me to go from this type of career,’ Riggleman said.