Rightmove is facing a backlash from estate agents who claim it is not doing enough to help them throughout the coronavirus crisis which is seeing them lose business amid plummeting home viewings and sales.

The property listing website has offered estate agents a 75 per cent discount for the next four months as the housing market looks set to grind to a halt amid the coronavirus outbreak.

Agents currently pay an average fee of £1,088 per month to advertise on the website. The move follows a previous offer to defer payments of up to £275 a month for six months, which was seen by many as not going far enough to support them.

Fees cut: Rightmove is offering a 75% discount to estate agents for the next four months

But hundreds of estate agents have joined forces and are insisting on the website to do even more, calling on Rightmove to offer agents a choice between the four-month discount and a tariff-free three month payment holiday, Property Industry Eye reports.

Rightmove was asked for comment but did not reply.

Jeremy Leaf, north London estate agent and a former RICS residential chairman, said: ‘In the industry there is a lot of resentment towards Rightmove not just because what they have done now but in the past.

‘Rightmove may have tried to satisfy agents by offering more of a service than before, but Zoopla and OnTheMarket also offer different services. Rightmove needs to work harder to justify its charges which are considerably higher than its competitors.’

Rightmove expects the 75 per cent cut in fees to hit revenues by £65-£75milion in this financial year, but given its high profit margins, it still remains in a good position, according to analysts.

‘On some levels Rightmove is perfectly placed to ride the coronavirus storm – its high margin, capital light, cash generative and debt free. Unfortunately the same cannot be said for its customers,’ said Nicholas Hyett at Hargreaves Lansdown.

‘Estate agents have been struggling for some time, but a spike in the number of property transactions falling through has clearly got Rightmove worried and it’s taken the decision to sacrifice profits in the short term to help customers keep their heads above water.

‘That’s sensible, but whether it will be enough remains to be seen.’

The housing market had started to pick up just before December’s general election.

But with the coronavirus criris unfolding, homebuyers, sellers and tenants are increasingly likely to stay put, both metaphorically, and quite literally too – inside their homes.

It said it was looking at ‘actions to preserve cash’ and ensure the long-term capacity of the business, although it did not specify what they would be.

It said that the first 11 weeks of the financial year had been in line with expectations but warned that the ‘significantly weakened economic outlook’ was likely to take its toll.

‘The speed of the slowdown in the UK housing market has been significant,’ Rightmove said in a statement to investors on Friday.

‘Notably the number of property transactions failing to complete in recent days and likely changes in tenant behaviour following the announcement of the renters’ protections by the government may put further pressure on estate and lettings agents.’ 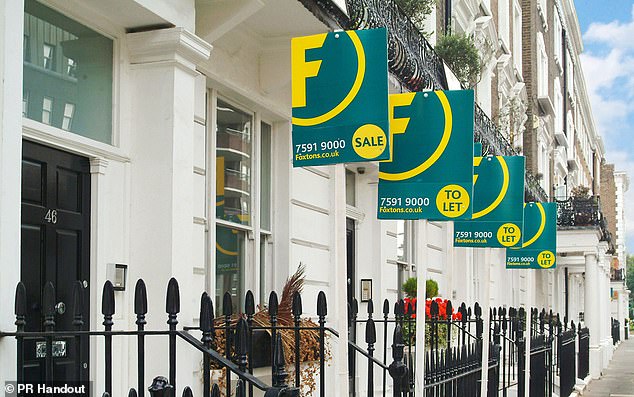 Last year, Rigthmove made pre-tax profit of nearly £200million, with sales of £267million.

The amount of cash the company raked in from advertisers jumped by £83 year-on-year to an average of £1,005 a month in 2019. Rightmove said the current average spend per advertiser is £1,088 per month.

Given its high fees, Rightmove is not that popular with agents, which however still advertise on the website as it’s a key player in the market.

Zoopla, another property listing website, also announced some concessions for agents on Friday.

Patrick Alvarado, director of Knightsbridge estate agency Nicolas Van Patrick, said: ‘We pay the same for Rightmove as we for the other two portals combined and although we are also fed up of Rightmove constantly reviewing its prices upwards, we have little option but to pay as it produces better and more leads than the other portals combined.

‘That said, the way the market has been over the past five years with so few sales it is clear that having three portals is a waste of money.

‘We hoped that when On The Market was launched in 2014 it would have the desired disruptive impact of the then duopoly that existed between Zoopla and Rightmove, but unfortunately the market turned at that point and what actually happened was that many agents left Zoopla as the condition of joining OTM was that you had to drop one of the other two portals.

‘It meant that Rightmove’s market dominance increased to the point that it is the runaway winner and has a monopoly on the market.’