Ring of steel: Biarritz is on lockdown ahead of G7 summit

Security is tightening in southern France as the country prepares to host the G7 summit this weekend.

The airport and train station at the beach resort of Biarritz were closing down Friday afternoon, with residents who are used to packed busy streets at the height of holiday season saying the streets are now empty.

Leaders of the Group of Seven countries arrive on Saturday to discuss issues including the struggling global economy and climate change until Monday. The nations in attendance include the United States, Germany, Japan, Britain, France, Canada and Italy.

Police arrested anti-G7 protesters near the site of the summit, with members of the 4th Generation Protection and Intervention Section (SPI4G) and Republican Security Companies (CRS) seen patrolling off the resort’s coast.

French military were also seen performing a de-mining sweep in the seaside town’s beaches, and officers on motorcycles patrolled the streets today.

Pictured: An anti-G7 activist is detained by French National police during a march along a road near a tent camp near Hendaye, France, August 23 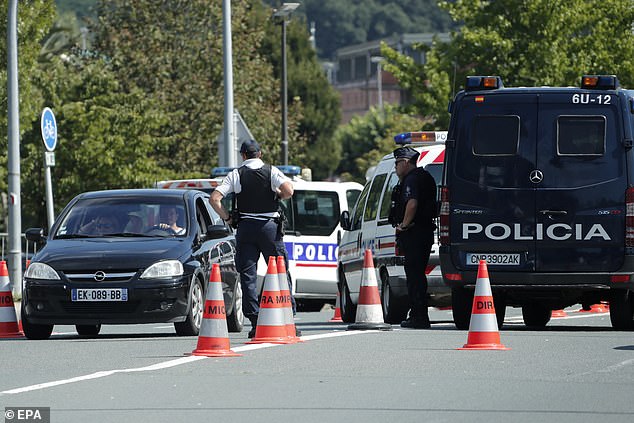 French and Spanish authorities make controls at the Franco-Spanish border on the eve of the G7 summit in Hendaye, near Biarritz, France, 23 August 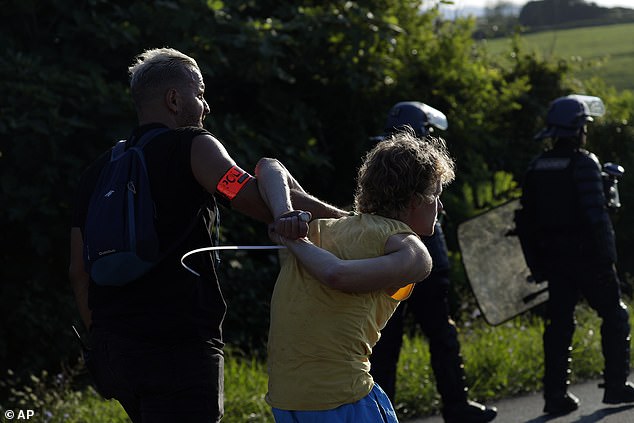 French police detain an Anti-G7 activist during a march along a road near a tent camp near Hendaye, France, August 23 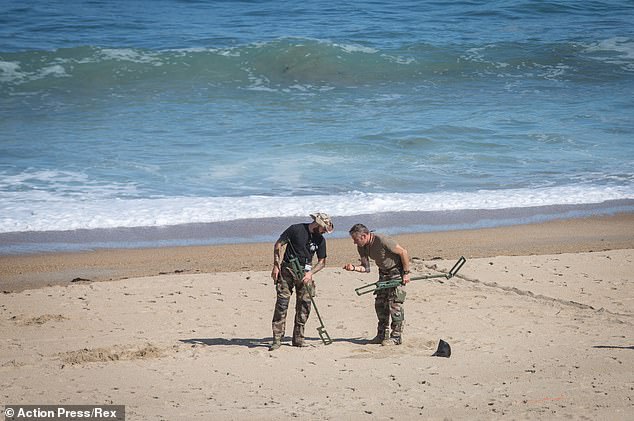 Earlier this week divers from the CRS were seen in the waters by Biarritz.

On the French-Spanish border, officers from both countries were seen checking vehicles, and riot officers were spotted patrolling outside the Hotel du Palais – a venue for the upcoming summit.

Anti-G7 protesters were seen being detained by French National police during a march near a tent camp near Hendaye, France today.

US protesters have set up camp on both sides of the border between France and Spain ahead of this year’s summit of the world’s major industrialized nations, where President Donald Trump will join French President Emmanuel Macron in Biarritz.

The city centre is almost deserted, and the seaside around the casino where leaders will meet is under lockdown.

Cars are thoroughly checked and tourists can no longer access their usual haunts. 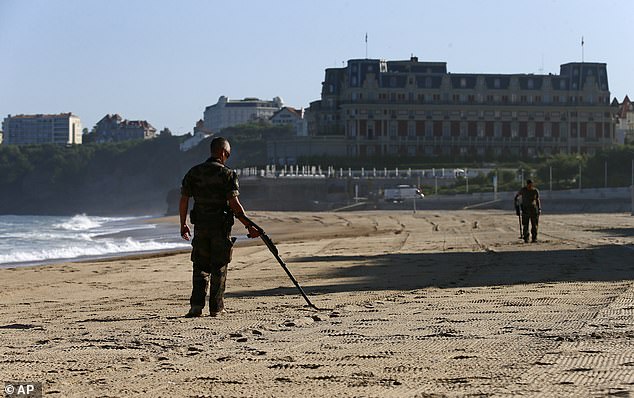 French military perform a de-mining sweep along the beach inside the red zone with the venue in the background as security is stepped-up ahead of the G-7 summit in Biarritz, France 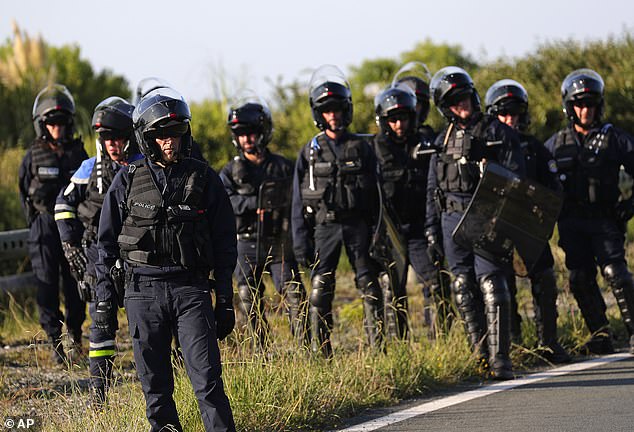 Police officers keep watch on a group of anti-G-7 activists on a road near a tent camp near Hendaye, France, August 23 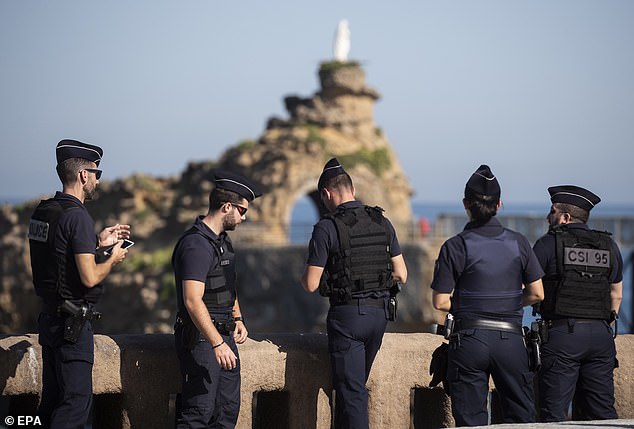 Police and gendarmes secure the coast in Biarritz, ahead of the G7 summit, 23 August 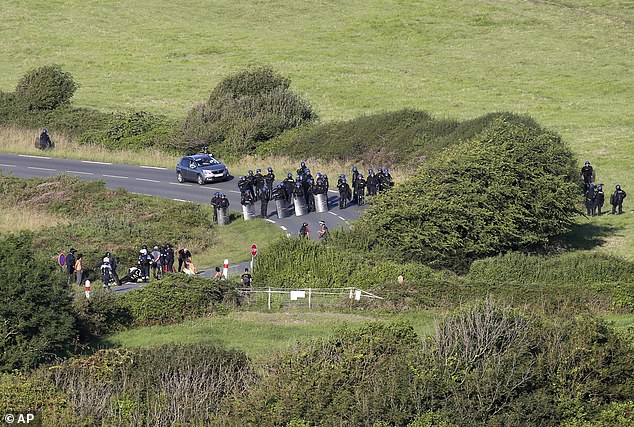 The summit will mark Boris Johnson’s first as Prime Minister, and he will have to walk a tightrope of diplomacy as he tries to persuade Donald Tusk and Donald Trump to give him a Brexit boost.

The trip to France will represent Mr Johnson’s debut foray on the world stage and his first face-to-face meeting with the US President since he took office is expected to dominate.

The Prime Minister will be keen to cement his strong relationship with Mr Trump and seek agreement on a timetable for striking a post-Brexit trade deal when the pair sit down for talks, potentially on Sunday.

But the premier will have to tread carefully to avoid a potential row with Mr Trump after they adopted different positions in the run up to the summit on whether Russia should be allowed back into the G7. 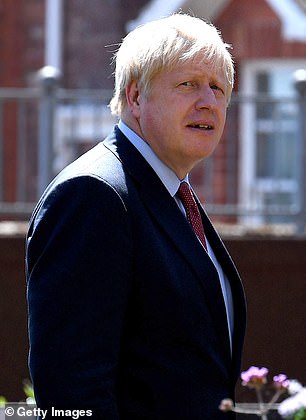 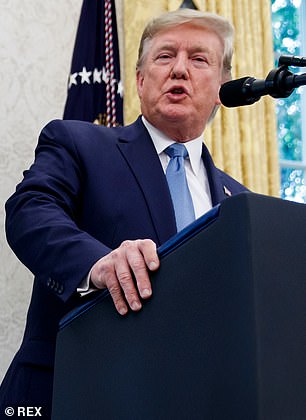 The summit will mark Boris Johnson ‘s first as Prime Minister, and he will have to walk a tightrope of diplomacy as he tries to persuade Donald Tusk and Donald Trump to give him a Brexit boost 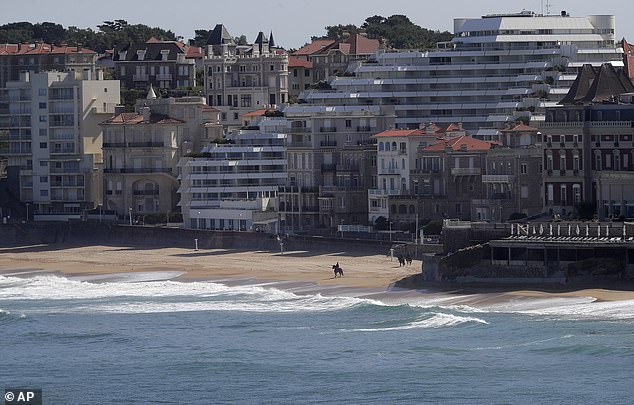 A mounted police officer rides along a deserted beach that falls inside the restricted area as security is stepped-up ahead of the G7 summit in Biarritz, France Friday, August 23 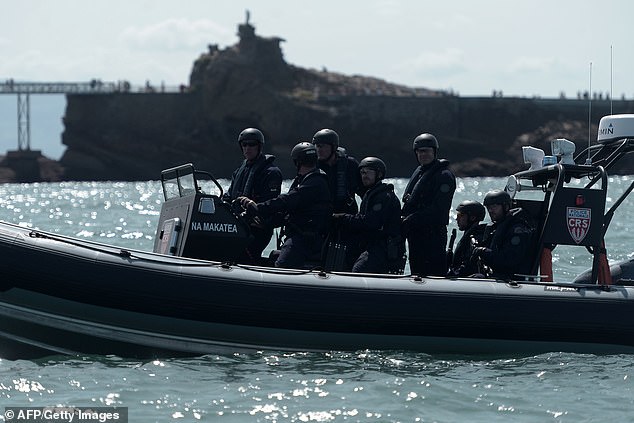 Members of the SPI4G (4th Generation Protection and Intervention Section) and CRS (Republican Security Companies) patrol off the coast of Biarritz, southwestern France on August 21, 2019 ahead of the 45th Group of Seven (G7) nations annual summit 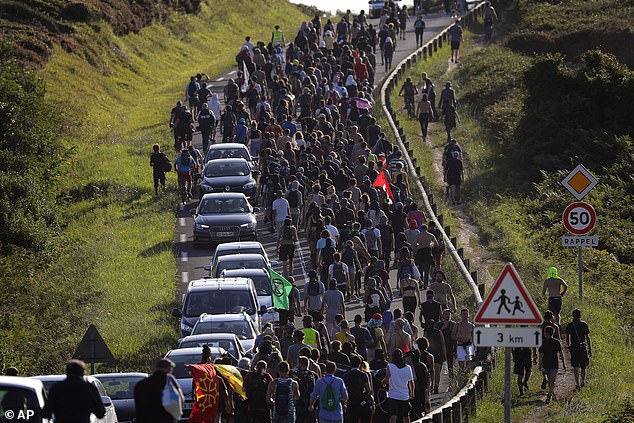 Anti-G7 activists march along a road near a tent camp near Hendaye, France, August 23

Mr Trump has called for Vladimir Putin to be allowed to return after Moscow was booted out of the G8 in 2014 over its illegal annexation of Crimea – but Mr Johnson is ice cold on the idea.

Meanwhile, Mr Johnson is also expected to sit down with Mr Tusk just days after the pair clashed over the PM’s demands to delete the backstop from the Brexit deal.

Mr Tusk responded to the call by suggesting Mr Johnson was being unrealistic and dishonest in his approach.

But Angela Merkel’s and Emmanuel Macrons’ subsequent decision to give the UK 30 days to come up with alternatives to the backstop will have raised Mr Johnson’s hopes that he will be able to persuade Mr Tusk to change his position. 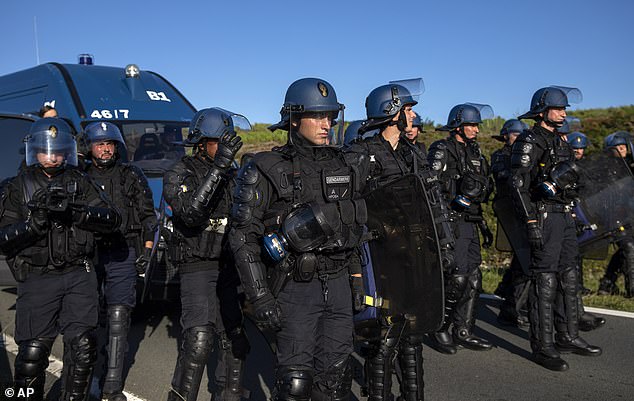 Police officers keep watch on a group of anti-G7 activists on a road near a tent camp near Hendaye, France 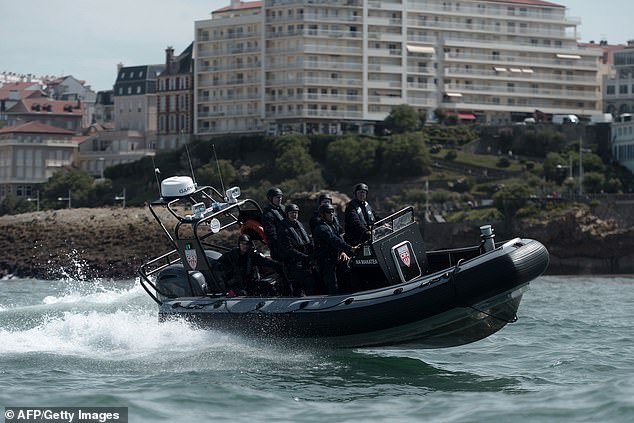 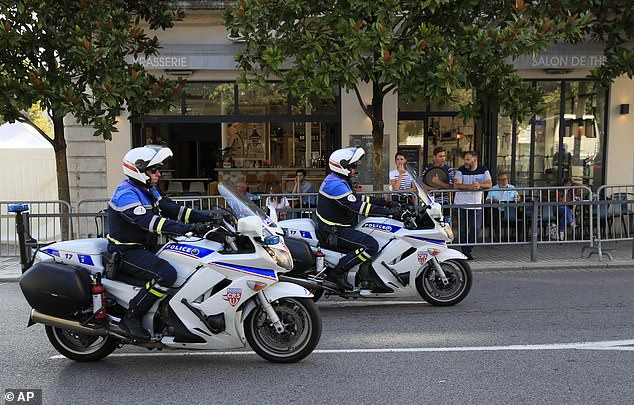 Police officers on motorcycles patrol past a cafe ahead of the G7 summit in Biarritz, France, August 23

The French President said today he would put pressure on the United States to sign a charter on protecting biodiversity at the G7 summit in Biarritz this weekend.

‘We have talked about diversity. It is for the first time, at this G7, that we will sign a charter for biodiversity, we are committed to this, it will be signed by all,’ he said in an interview with news website Konbini in the garden of his Elysee palace.

Asked whether this would include the United States, Macron said: ‘That is the real question, we will see, I will put pressure.’

‘It will be signed by India, which is also very important,’ he added. 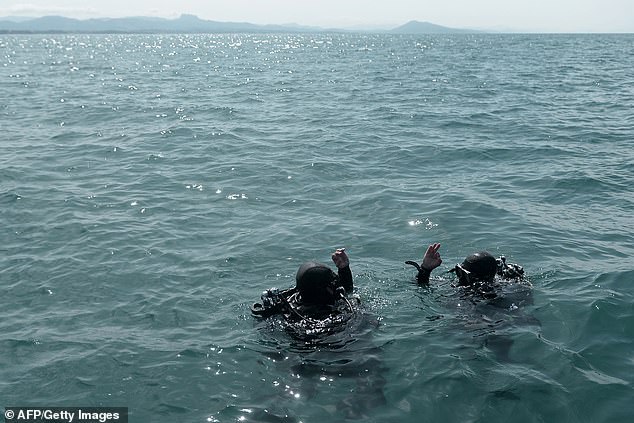 Members of the CRS (Republican Security Companies) dive off the coast of Biarritz, southwestern France, on August 21, 2019 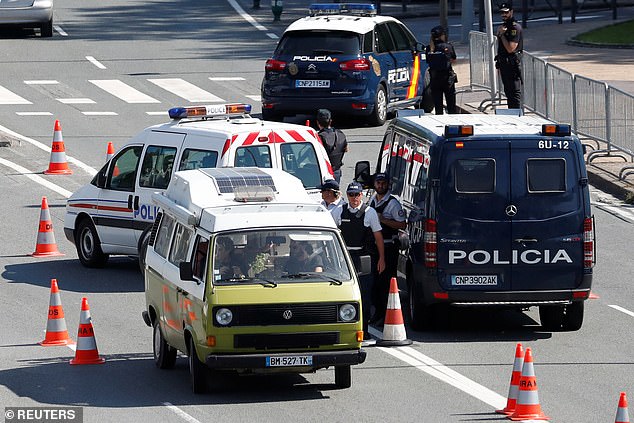 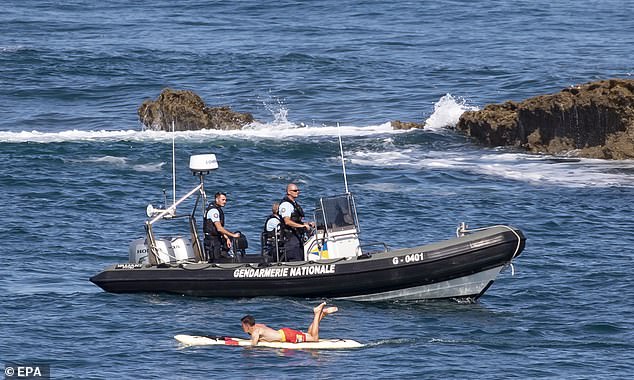 A gendarmerie boat patrols the coast as a lifeguard floats on a surfboard in Biarritz, ahead of the G7 summit

Macron said that climate, global warming and biodiversity would be at the heart of the G7 meeting but he also called on individual citizens to live and consume responsibly.

‘We are all co-responsible for this, in the choices we make when we buy clothing and food, in our everyday behaviour when it comes to sorting (and recycling). The G7 is one thing, but our daily life is just as important,’ he said.

In May, after meeting scientists from the Intergovernmental Panel on Biodiversity and Ecosystem Services (IPBES), Macron said he would bring up the issue of biodiversity in talks within the G7. 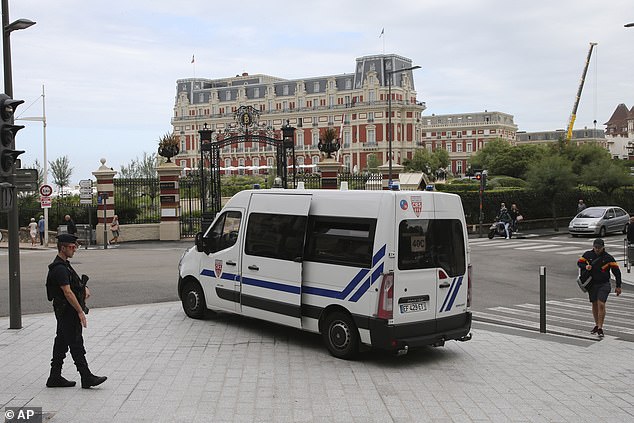 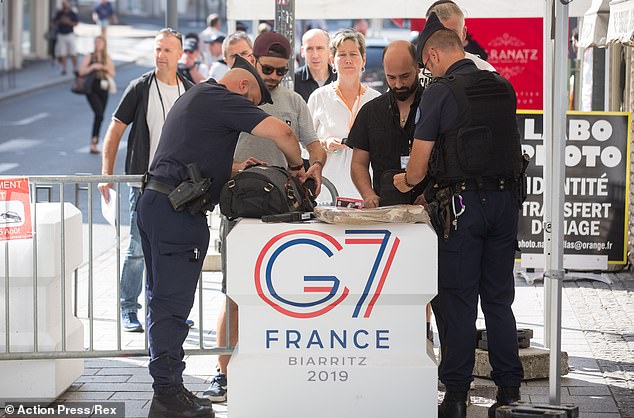 Pictured: Police presence and preparations for the G7 Summit in Biarritz, France, 23 August

He said at the time that his government would seek to increase the size of natural areas under protection and take tax and budget measures to support biodiversity.

He added that he also wants the European Union to encourage financing of sustainable crops as part of its common agriculture policy.

IPBES – which groups 130 countries, including the United States, Russia and China – said in a report released in May that one million animal and plant species are at risk of extinction due to humans’ relentless pursuit of economic growth.