The Zika virus, presidential impeachment, pollution — Brazil has been in the news for all the wrong reasons.

But when the Olympic flame at Rio de Janeiro’s Maracana Stadium is lit at the opening ceremony, all that will be forgotten.

WHERE DO I START?

Ravishing Rio: The iconic statue of Christ the Redeemer presides over the city

Rio and its many Olympic venues sprawl along miles of Atlantic beachfront, hemmed in by granite peaks and the world’s largest urban rainforest, Tijuca.

So if you’re lucky enough to be going to the games, or are tempted by what you see on TV and travel to Rio soon, make sure you take the cablecar to the top of the 396m Sugarloaf Mountain (Pao de Acucar) and soak up the view. 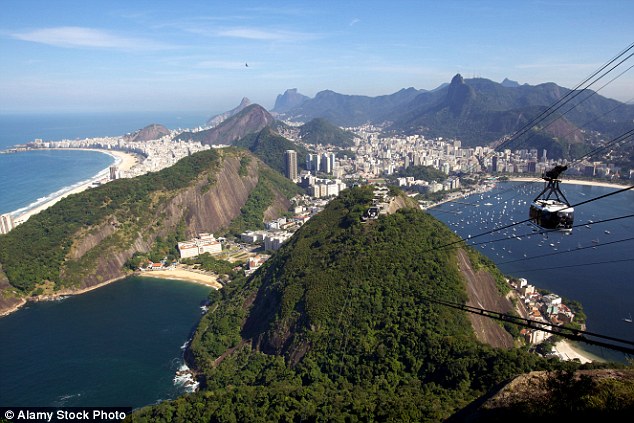 To the north lies Guanabara Bay and the older parts of the city, including the Maracana, plus the home of Rio’s Carnival, the Sambodromo, which will host the Olympic marathon.

To the west is the curve of Copacabana, an unbeatable venue for the beach volleyball. High in the hills, the statue of Christ the Redeemer gazes over it all.

It should be. Crowning Corcovado mountain, Rio’s art deco statue is a city essential, even if you will jostle for space with crowds and their selfie sticks.

For a more peaceful panorama, take a pre-dawn guided hike up the mini-sugarloaf Dois Irmaos at the end of Leblon beach 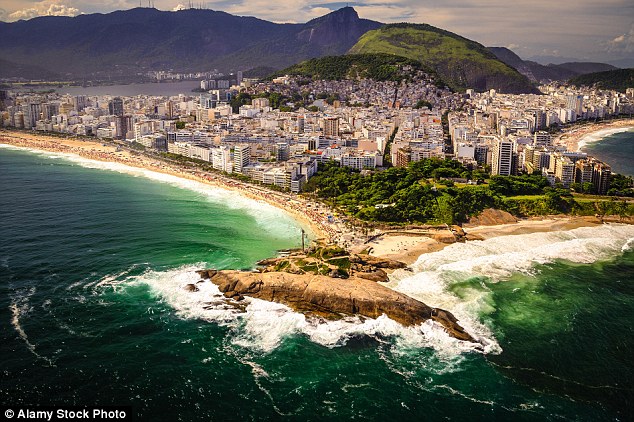 You’re spoilt for choice when it comes to beaches in Rio. Pictured is Ipanema Beach 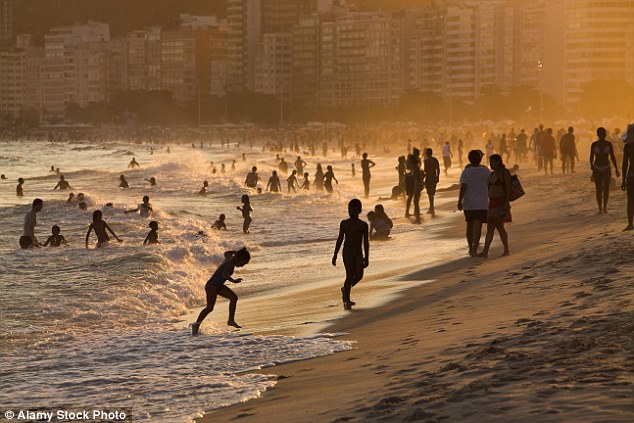 Wherever you go, the people watching is wonderful, as enviably toned, minimally clad Cariocas (Rio dwellers) play foot-volleyball, do ostentatious stomach-crunches, or sip a cold chopp (draught) beer on the promenade.

The palm-backed cove of Praia Vermelha, at the foot of Sugarloaf, is an easy-going beach favoured by families — with calm waters perfect for kayaking and paddle-boarding.

Alternatively, head west to the upmarket suburb of Barra da Tijuca, the location for the Olympic athletes’ village.

A new metro line, No 4, has opened just in time for the games, making the area’s seven miles of clean beaches — plus assorted Miami-style luxury hotels and shopping malls — just a short hop from downtown.

Finally, to the west of Barra, Prainha and Grumari beaches are wilder, quieter spots where the city’s hustle evaporates. 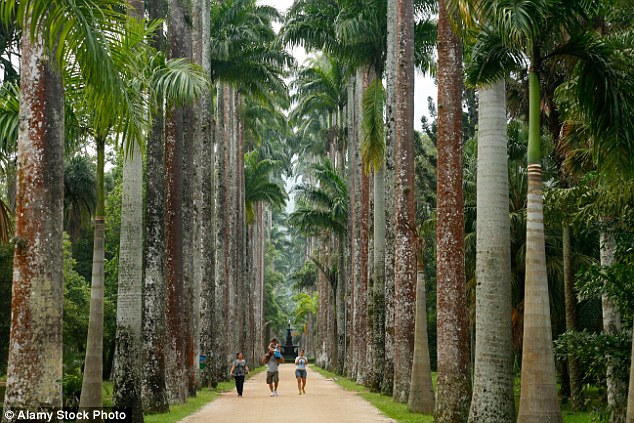 Jardim Botanico is a tranquil  garden, but there are also plenty of hip places to eat nearby

Rio’s Jardim Botanico is a tranquil tropical garden where capuchin monkeys clamber through bamboo thickets and turtles loll in the ponds.

After a stroll, relax under the ceiling fans of La Bicyclette (labicyclette.com.br), a French-colonial style bistro serving artisan pastries.

Down the road is the huge Rodrigo de Freitas Lagoon, venue for the Olympic rowing — a pleasant spot for an afternoon amble.

The city’s newest attraction is the Museum of Tomorrow (museudoamanha.org.br).

Part of the Olympic-fuelled regeneration of the old dockyards, the building is an attraction in itself, resembling a giant reptile eyeing Guanabara Bay.

Inside, a series of digital exhibits analyse the impact that humans have had on the world and how we might live more sustainably. 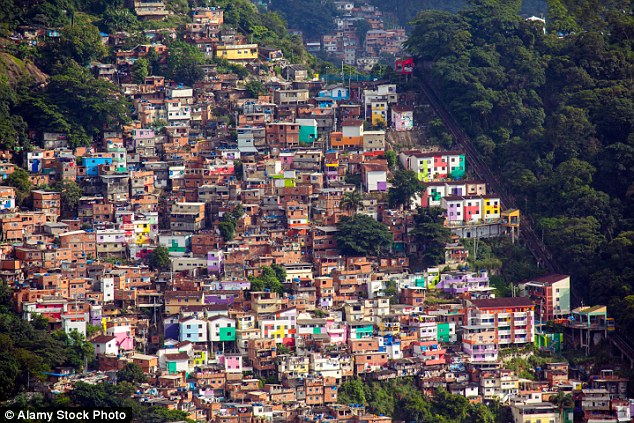 Rio’s shantytowns were once notorious for drug-fuelled violence. Many are still no-go areas, but — since they mainly hug the city’s hilly fringes — you won’t stumble into them.

More central ones — including Vidigal, Babilonia and Santa Marta — have been ‘pacified’, and tourism is helping to support their hard-working residents.

Take a walking tour through the candy coloured jumble of Santa Marta with a local guide (search ‘Santa Marta Favela Tour’ on Tripadvisor) for a fascinating insight into an alternative community. 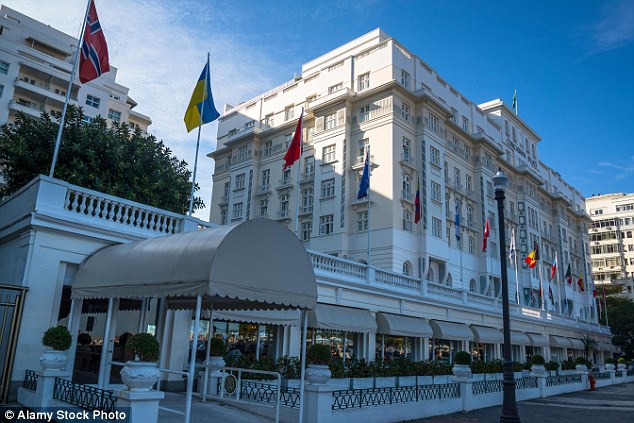 Stylish: The Belmond Copacabana Palace is the swankiest address in town

The Belmond Copacabana Palace is the swankiest address in town. Huge and white like an art deco wedding cake, it’s been favoured by A-listers and royalty since it opened in 1923.

It has Rio’s biggest hotel pool and a Michelin-starred restaurant (from £299, belmond.com).

There are boutique options, too, including the beachfront Marina All Suites in Leblon (from £176 per night, leblonallsuites.com.br/en), the good-value Ipanema Inn (from £108, ipanemainn.com.br/en) and neo-colonial Hotel Santa Teresa in a hilly, boho district (from £231, santateresahotelrio.com). 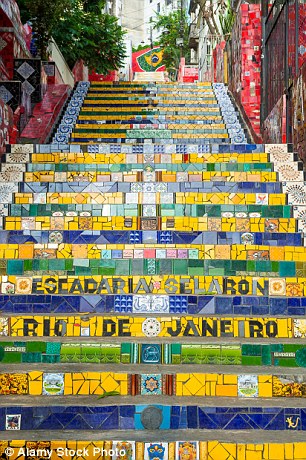 The district around the Jardim Botanico is fast becoming a diners’ hotspot — on Rua Pacheco Leao, you will find funky Bar do Horto, laid-back Jojo Cafe Bistro, and home-made Brazilian food at Borogodo.

The backstreets of Ipanema and Leblon are packed with informal botecos as well as many of the city’s trendiest restaurants.

Nearby, you can sip a caipirinha at the touristy, but atmospheric, Garota de Ipanema bar, where bossa nova classic The Girl From Ipanema was penned in 1962.

Head to Avenida Mem de Sa for bars with DJs and live music. The nearby antique-filled Rio Scenarium nightclub is a great place to watch — or try — samba.

HOW DO I GET THERE?