Rio Ferdinand credits his intense workout regime for helping him cope with being a dad again in his 40s.

The former Manchester United captain, 42, told MailOnline exercising up to four times a week has put him in ‘good stead’ for handling ‘sleep deprivation’ following the birth of his son, Cree, who he shares with ex-TOWIE star Kate, 30.

In an exclusive interview, Rio, who’s also a dad to Lorenz, 14, Tate, 12, and Tia, ten, revealed maintaining a trim physique helps him to ‘look and feel good’ ahead of his upcoming hectic work schedule as the Euros kickoff on Friday.

‘Staying active definitely helps’: Rio Ferdinand credits his intense workout regime for helping him cope with being a dad again in his 40s

He said: ‘Staying active definitely helps in that respect. Staying active and being healthy and having a good lifestyle means that all these late nights, sleep deprivation – it puts you in good stead.

‘I workout 2-3 times a week, sometimes four if I’m lucky. This next month is going to be difficult to get as much workouts in as I’d like a week because of the travelling and games but generally 2-3 times a week I normally get it.

‘I like to look good and feel good. The gym is an hour to yourself as well where you can get your mind thinking about certain things, a lot of creative ideas come in that space.

‘I was an athlete before and to just stop and not do anything wasn’t what I’m about. I wanted to keep moving.

‘Kate and I workout together, we work out together at times and separately. We enjoy it, it’s not something we put on or force – we enjoy going to the gym so when we get the chance to we do it.’ 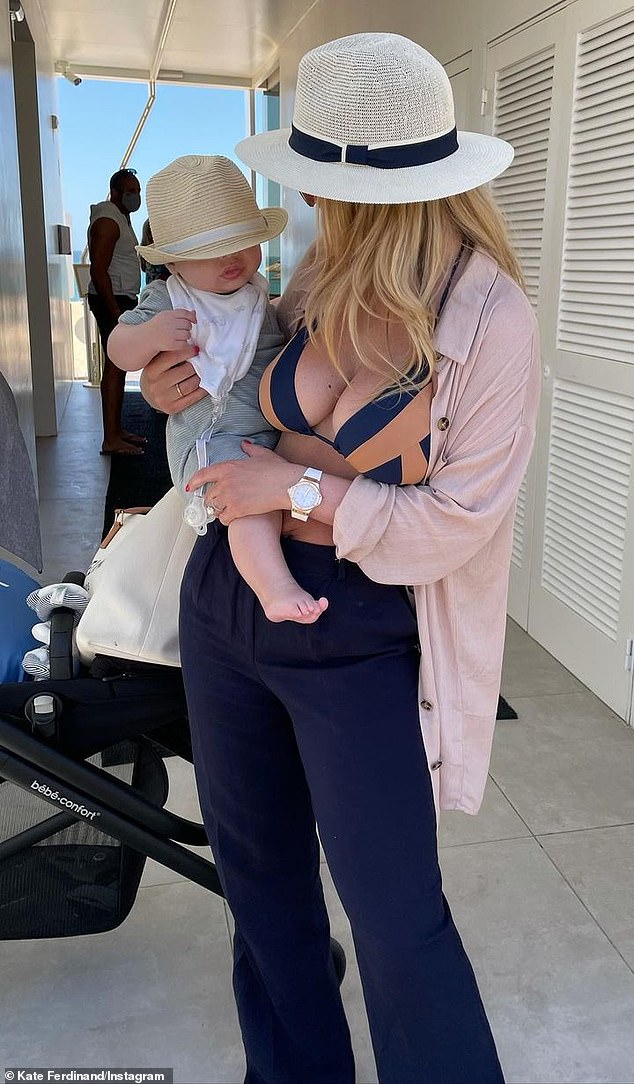 ‘I like to look and feel good’: Rio told MailOnline exercising up to four times a week has put him in ‘good stead’ for handling ‘sleep deprivation’ following Cree’s birth, who he shares with Kate

The couple welcomed son Cree in December and Kate has since detailed the ‘tears and emotions’ she felt in the weeks following the birth of her first child.

Rio explained one advantage of being in lockdown meant he was able to dedicate more time to supporting Kate as she adapted to motherhood, while noting his older children have also been keen to lend a hand with nappy changing.

He said: ‘The pandemic meant everyone was at home and lockdown babies have been lucky enough to have both parents there.

‘It’s definitely been a big difference. It’s one we have enjoyed. I have definitely seen the benefits for us as a family. Life has been great in that sense.

‘Kate has done really well but the kids are helping as well, which has been good. We’ve had extra pairs of hands to help.

‘The kids love it – they’re really happy, Kate’s really happy – we’re just a happy family at the moment and long may it continue.’ 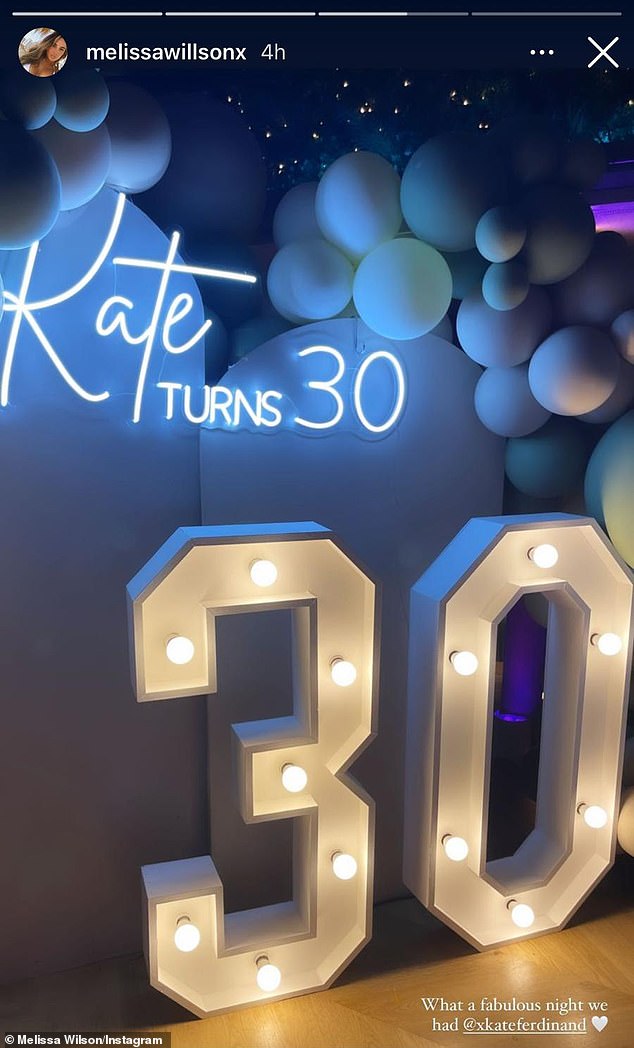 ‘Kate turns 30’: On Thursday, the married couple seemingly had a night off from parenting duties as they celebrated Kate’s 30th with a private party 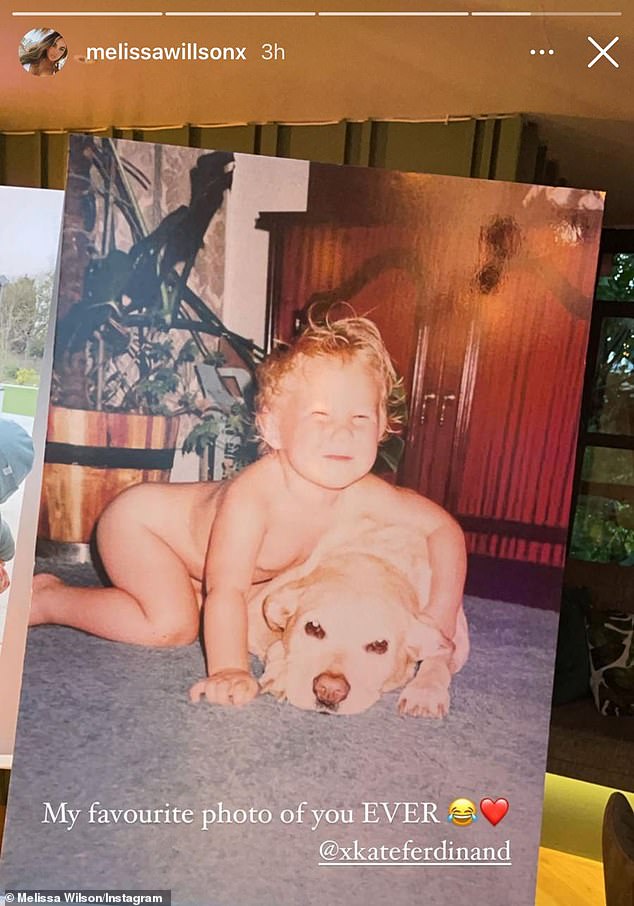 ‘Favourite’: Kate’s close friends and family gave her a night to remember by decorating the venue with baby pictures of Kate, including a hilarious snap of her in the nude cuddling a dog

On Thursday, the married couple seemingly had a night off from parenting duties as they celebrated Kate’s 30th with a private party.

Kate’s close friends and family gave her a night to remember by decorating the London venue with baby pictures of the reality star, including a hilarious snap of her in the nude cuddling a dog.

The birthday girl was spoiled with a three-tiered cake that was situated in front of a huge photograph of her and Rio on their wedding day.

Kate, who wore an all-green outfit for her special night, said she had ‘the most fabulous evening’ as she posted pictures of her with Rio on Instagam after the event. 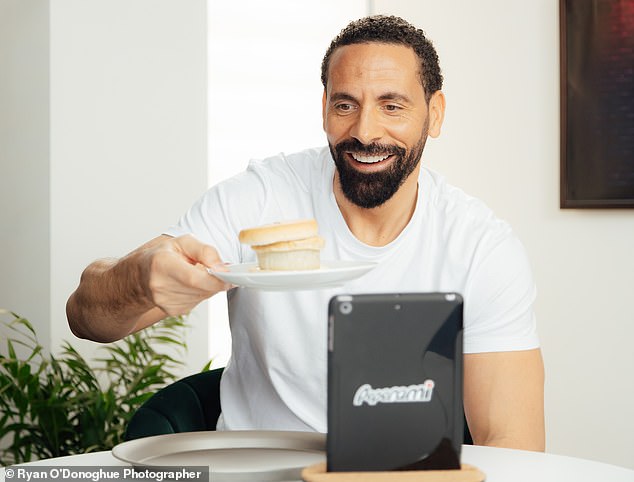 ‘I don’t watch a game without snacks’: Rio was challenged by Peperami to try some of Britain’s most boring foods including a Wigan kebab and crisp sandwich, none of which tantalised his taste buds

Rio has teamed up with Peperami in their mission to ban Britain’s blandest snacks.

Peperami challenged Rio to try some of the country’s most boring foods including a ‘crisp sandwich’ and ‘jellied eels’, none of which tantalised his taste buds.

The sportsman created his very own ‘Snackadium’, which helps overly organised Rio to compartmentalise his treats, and entice Kate, who likes to mix and match, to eat one snack at a time.

He said: ‘I don’t ever watch a game without snacks – it’s just not something I do, everybody watches snacks when they watch a game. It’s about getting the right snacks.

‘We’ve come up with a thing called Snackadium, which has little compartments in your snack stadium. I don’t want any mess, so it comes into play then because you can compartmentalise all of your snacks into different areas because I don’t like mixing my snacks. I need it all separate; I’m very organised like that.

‘That’s the big difference between me and Kate, we both love our snacks, but she eats everything at once. Sundays are usually our day when we have snacks because everyone’s at home – in the week I’m busy, the kids are busy, so Sundays we have snacks on the sofa – having family time together is differently an important part.’ 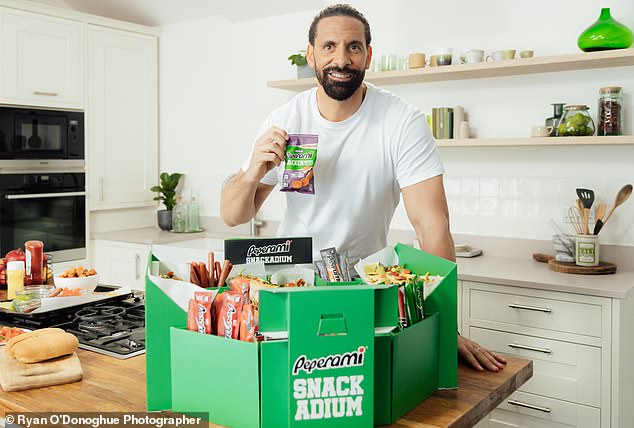 ‘I don’t like mixing my snacks’: Rio created his very own ‘Snackadium’, which helps him to compartmentalise his treats, and entice Kate, who likes to mix and match, to eat one at a time