Rio Tinto will hand out the second largest dividend in FTSE 100 history after it cashed in on soaring commodity prices.

The mining giant will distribute £12.6billion for 2021 – a boost for Britons whose savings and pensions are tied to the stock market.

The payout is second only to Vodafone’s £18billion dividend in 2014 after it sold its stake in Verizon Wireless, and comes after scandals and setbacks that have affected some of Rio’s most promising projects.

Commodities boom: Rio Tinto will distribute £12.6bn in dividends for 2021 – a boost for Britons whose savings and pensions are tied to the stock market

Last year it benefited from a surge in the price of key metals and minerals, including copper and steel ingredient iron ore, both of which hit record high values.

That offset disruption Rio experienced at some sites, as iron ore earnings rose by 46 per cent and copper by 90 per cent.

Total profit doubled to almost £23bn, and turnover rose 42 per cent to £47billion. Its figures follow robust results from rivals Glencore, BHP and Anglo American. But analysts said the bumper payout may not be repeated next year.

Victoria Scholar, investment head at Interactive Investor, said: ‘The latest record payout, the second largest in FTSE 100 history, demonstrates the underlying fundamentals that are favourable towards the mining sector.

‘For income investors mining stocks are the go-to destination, underpinned by strong demand from China.

‘This is a one-off ‘special’ dividend payment, raising questions about whether we are approaching peak earnings and dividend growth for Rio and the wider sector.’

Rio could be gearing up for a major takeover or merger. Ben Davis at Liberum expects it ‘to engage in further mergers and acquisitions’ this year, while AJ Bell investment director Russ Mould said the miner could be ‘getting itchy to do a mega deal’. 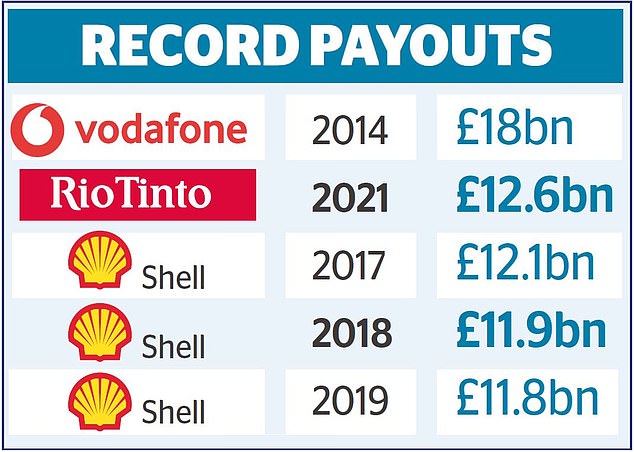 Rio chief executive Jakob Stausholm said the company was ‘very sad’ that the Serbian government had pulled the plug on a £1.8billion lithium mine Rio was developing in the country.

The decision dealt Rio a hammer blow as it was set to be one of the world’s largest lithium mines and bolster Stausholm’s efforts to focus more on green metals.

The new boss has tried to repair Rio’s reputation after an external report into its culture revealed horrifying levels of bullying, abuse and discrimination.

He had already been working to restore Rio’s image after it blew up two 46,000-year-old Aboriginal cave shelters in Australia in 2020, which provoked international fury and led to a management clear-out that removed his predecessor, Jean-Sebastien Jacques.

Stausholm said yesterday he was following the situation in Ukraine ‘very closely’ and considering how more stringent sanctions could hit its work, particularly its aluminium operations, where it is a partner with Russian group Rusal.

But, Stausholm added, the company had to grapple with sanctions that were placed on Rusal in 2018 and had ‘managed to navigate that’ successfully.