Mining giant Rio Tinto has pledged to halve its carbon emissions by 2030, in a AU$10billion (£5.4billion) push to speed up the pace of green change at the firm.

As part of its accelerated decarbonisation plans, the group said it will switch its iron ore mines in the Pilbara to renewables.

Such a move would see gas phased out at the company’s Pilbara mines and coal eliminated from the electricity supply to its aluminium smelters.

Accelerated: Rio Tinto has pledged to halve its carbon emissions by 2030, in a AU$10billion push to speed up the pace of green change at the firm

It said it was also looking at options for the decarbonisation of the power supplies to its Boyne Island and Tomago smelters.

Rio Tinto said it aimed to cut direct emissions from operations and ones from electricity it consumes by 50 per cent by 2030, which is triple its previous target.

It has also brought forward a promise to cut emissions by 15 per cent by five years, to 2025.

The group made no new commitments on ‘scope 3’ emissions, namely those created by its customers, largely steel mills in China, but executives said the company was working on the problem.

Earlier this year, Rio Tinto said it would work with steel mills to cut their emissions by 30 per cent by 2030, but environmental activists warned the commitment was not enough, and rival BHP pledged to halve its scope 3 emissions by 2030.

The group’s boss, Jakob Stausholm, said: ‘Rio Tinto is taking action to strengthen our business and improve our performance by unleashing the full potential of our people and assets, working in partnership with a broad range of stakeholders.

‘All our commodities are vital for the energy transition and continue to benefit from ongoing urbanisation. We have a clear pathway to decarbonise our business and are actively developing technologies that will enable our customers and our customers’ customers to decarbonise.

‘We are able to do this, while continuing to provide attractive returns to our shareholders in line with our policy, because we have a strong balance sheet and world-class assets that deliver strong free cash flows through the cycle. 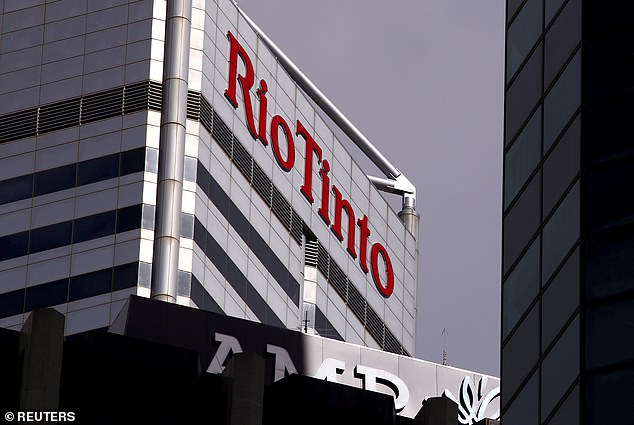 Plans? Rio Tinto made no new commitments on ‘scope 3’ emissions, namely those created by its customers, largely steel mills in China

Earlier this week, an Australian parliamentary report examining the firm’s destruction of the Juukan Gorge sites called for a major overhaul of the country’s cultural heritage laws. The shift could include giving indigenous groups the power to sue mining firms.

On Tuesday, the group’s head of strategy and development, Peter Toth, announced he was quitting the company after eight years. He is the second member of Rio Tinto’s top brass executive team to resign in recent months. Barbara Levi, the firm’s chief legal officer, is also quitting the group later this month.

The Anglo-Australian miner, which is holding its first investor day in two years on Wednesday, has seen its share price slip around 0.07 per cent to AU$98.08 today. A year ago the group’s share price was AU$95.30, meaning it has risen by 2.92 per cent in the past year.

The share price has been held back by a hefty decline in the price of iron ore, which is the group’s key commodity.