Some 10,000 police officers are gearing up for potential clashes tonight in France and Belgium after Les Bleus dumped underdogs Morocco out of the World Cup.

Around 2,200 officers, many of them equipped with riot gear, are stationed in Paris, with police vans and barricades lining the Champs-Elysees. A similar approach has been taken in the Belgian capital.

Morocco fans in France had been in a celebratory frenzy ever since their team went on its historic World Cup journey, becoming the first African and Arab team to reach the last four in the global showpiece event.

In some places including the Champs-Elysees, Morocco fans clashed with police, destroying cars and shop windows, after beating Portugal in the quarter-finals, while supporters ran riot in Brussels when their team defeated the Red Devils 2-0 in the group stage.

Police form a line on either side of a water cannon vehicle in Brussels after France won the World Cup semi-final football match between Morocco and France on Wednesday, December 14, 2022 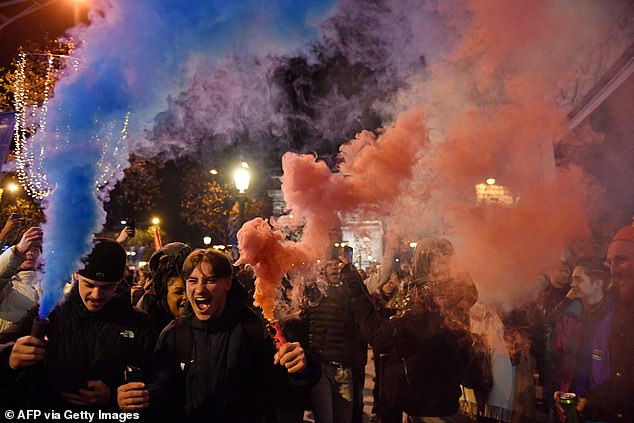 Football fans hold smoke flares as they celebrate France’s victory over Morocco in the Qatar 2022 World Cup semi-final on the Champs-Elysees in Paris on December 14, 2022

Supporters poured into Paris’ freezing Champs-Elysees on Wednesday after a World Cup semi-final between France and Morocco which for millions tugged at the heartstrings, as ‘Les Bleus’ won 2-0 to reach the final for a second time in a row.

They were flanked by hundreds of police trucks securing the area as fans let off fireworks.

Deeply enmeshed by their colonial bonds and post-war flows of migrant labour from North Africa to France, the two nations share a history that has shaped their identities and their politics, and made for a sometimes edgy relationship.

France and Belgium are both home to a large Moroccan community, many of whom have dual citizenship. 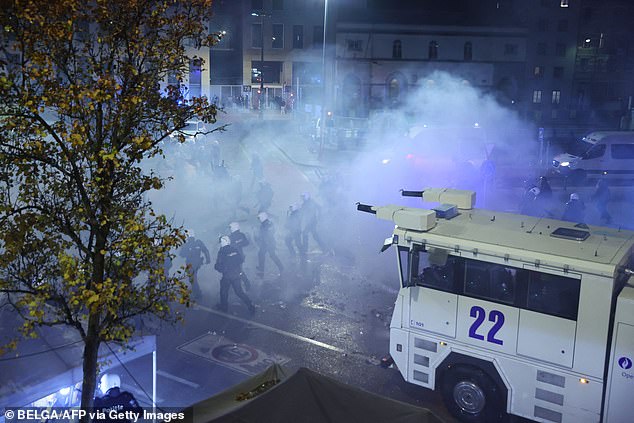 Riot police officers stand in a street during clashes, in Brussels, after Morocco lost the Qatar 2022 World Cup semi-final football match between Morocco and France, on December 14, 2022 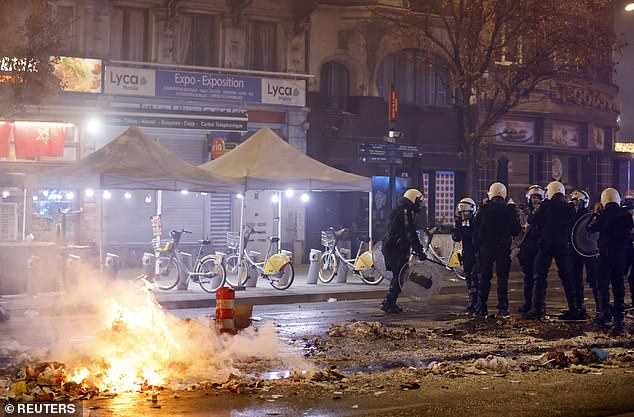 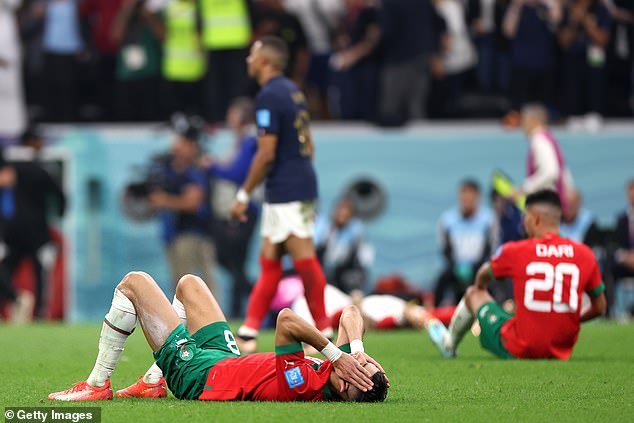 Jawad El Yamiq of Morocco looks dejected after the 0-2 loss during the FIFA World Cup Qatar 2022 semi final match between France and Morocco at Al Bayt Stadium on December 14, 2022 in Al Khor, Qatar 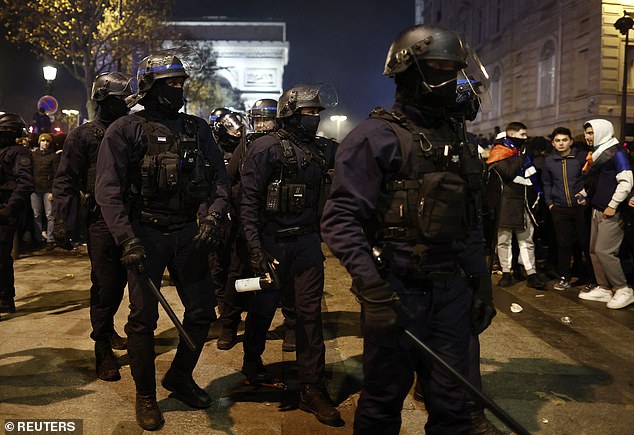 Police officers brandish batons while dressed in riot gear on the Champs-Elysees. The Arc de Triomphe can been seen looming in the background

‘We preferred to come early because it will be chaos later on. We just want to celebrate our win and we can really feel it will get crazy,’ said student Kerene Massuka who came with a friend carrying a French flag.

Crowds of supporters from both countries were seen entering the Christmas-decorated boulevard after the final whistle, where authorities were bracing for tens of thousands despite temperatures around 0 Celsius.

The stakes were high on both sides.

Morocco had a shot at becoming the first African nation to reach a World Cup final, but France are now poised to become the first team to retain their World Cup title in 60 years on Sunday.

Theo Hernandez scored in the fifth minute in a perfect start for the holders, who would have been looking for an early strike to silence the rowdy Moroccan support at the Al Bayt Stadium and dent the confidence of their team.

But it still proved a close-fought match as Morocco overcame injury blows and showed no deference to France´s reputation, taking the game to them in a gallant effort that added to the glowing reputation they have earned at the tournament. 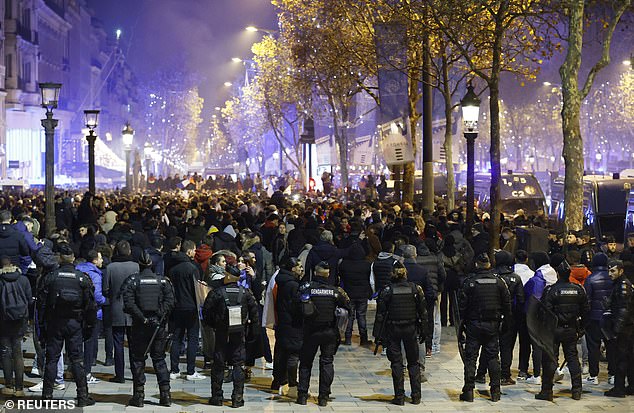 Fans gather in Paris for France v Morocco – Paris, France – December 14, 2022 Police officers in riot gear are pictured as France fans celebrate on the Champs-Elysees after the match 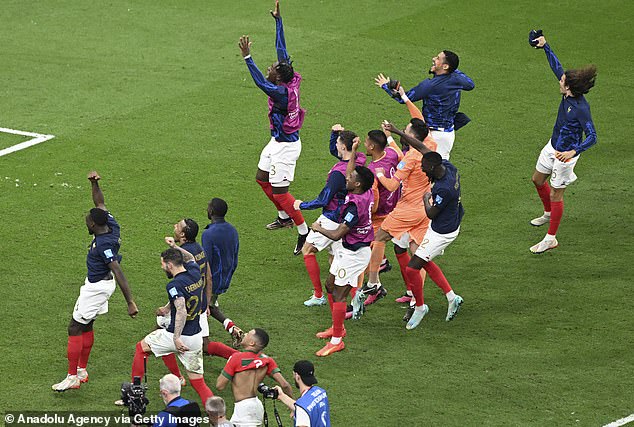 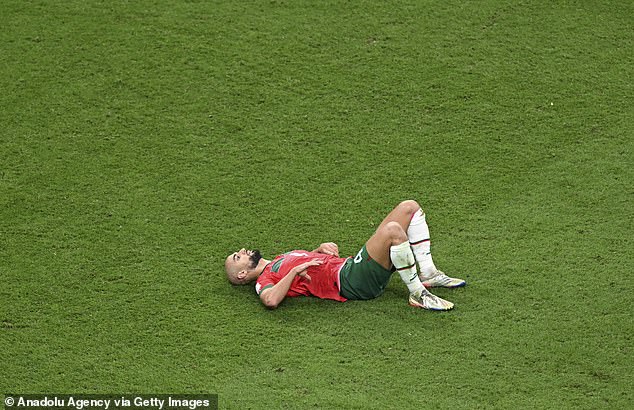 France settled the outcome with a second goal 11 minutes from time as substitute Randal Kolo Muani, with a first touch after coming on, tucked in a shot at the back post.

They are now into a fourth World Cup final and can become the first country to successfully defend their title since Brazil 60 years ago.

“There’s emotion, there’s pride, there’s going to be a final step, we’ve been together with the players for a month, it’s never easy, there’s happiness so far,” said a smiling coach Didier Deschamps.

For the first goal, Hernandez had to lift his left foot high to connect with a bouncing ball from a tight angle to finish off a sweeping move started by Antoine Griezmann´s run down the right and a cutback pass that Kylian Mbappe initially fluffed.

Mbappe was the creator of the second as he attempted first to dribble through the Morocco defence and then shoot, his effort blocked but falling for Kolo Muani to net.

Olivier Giroud struck the post and missed from point-blank range in the first half at the end of a barnstorming run through the middle from Aurelien Tchouameni.

The midfielder threaded a superb ball to find Mbappe, whose miscued shot was poorly cleared, allowing Giroud a first-time shot which went wide from close-in.

But Morocco were never overawed and created opportunities of their own as Azzedine Ounahi forced two good saves out of French captain Hugo Lloris with speculative efforts, and curling set-pieces put the French defence under pressure.

The north Africans were hit hard by injuries to their key centre backs with the gamble of naming Nayef Aguerd in the starting line up failing to work as he hurt his hamstring in the warm-up and skipper Romain Saiss was forced off after 20 minutes.