Rise in divorced boomers getting plastic surgery: 50,000 more over-55s went under the knife last year as many return to the dating scene

The rate of baby boomers getting Botox is soaring exponentially year-on-year – and surgeons believe it has a lot to do with dating apps.

Last year, 50,000 more over-55s underwent cosmetic procedures than they did in 2017, primarily getting facial procedures or liposuction, according to a new report from the American Society of Plastic Surgeons.

According to Anne Taylor, MD, a board-certified plastic surgeon in Columbus, Ohio, a growing number of her older patients tell her they want to look better in selfies as they re-enter the dating scene.

‘They’re not necessarily looking to turn back the clock to their twenties, but just to make some subtle changes to put their best face forward,’ Dr Taylor said.

‘For example, a lot of my patients have expressed concerns about their neck or double chin, especially when it comes to looking downward to take a photo or video chat on their phones.’

With the report, the American Society of Plastic Surgeons shared the story of one patient, 55-year-old Jody Pinkerton (right) who had a tummy tuck and breast augmentation after getting divorced as she started dating again

Baby boomers are already big business for the plastic surgery industry, and increasingly so.

They have, rather consistently, made up the majority of facelifts (in 2018 they accounted for 66 percent) and a majority (48 percent) of eyelid surgeries.

Rates have been steadily climbing. Since 2008, there has been a 6 percent increase yearly.

According to the new report, liposuction rates increased 4 percent among this age group in 2018.

With the report, the American Society of Plastic Surgeons shared the story of one patient, 55-year-old Jody Pinkerton who had a tummy tuck and breast augmentation after getting divorced as she started dating again.

Jody said she didn’t feel she looked the way she felt as she started trying to meet people virtually.

After her operations, she met her now-husband of five months on a dating site. 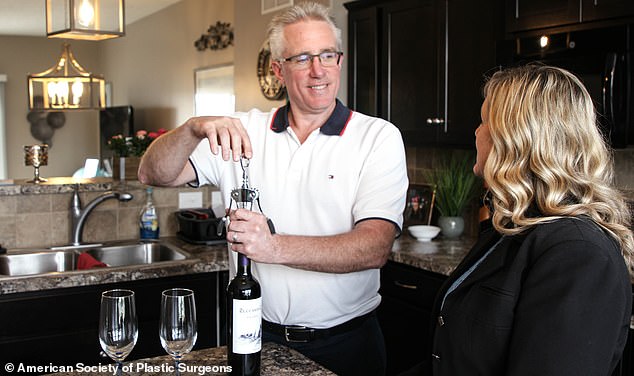 After her operations, Jody met her now-husband of five months, Joe, on a dating site

‘Online dating can be scary, and you really need to be able to put yourself out there,’ Jody said in a news release.

‘People are initially judging you on a few photos, and I wanted to make sure I could have current photos that really represented who I am and made a good first impression.’

According to Dr Taylor, Jody is a classic example of the type of patient she is seeing more of.

‘My boomer patients are confident and accomplished men and women, and they just want to look in the mirror and see the person they feel they are inside,’ said Dr. Taylor. ‘Finding the right cosmetic procedures can give them that extra boost of confidence when venturing into a new chapter of their lives.’