Rishi Sunak will today set out the Government’s business support package for the second national coronavirus lockdown as he warned the new restrictions will have ‘significant additional impacts’ on the economy.

Boris Johnson confirmed at PMQs that the Chancellor will deliver a statement in the House of Commons later this afternoon.

The Prime Minister said Mr Sunak will outline ‘all the support and provisions that we are making for this latest phase to tackle the autumn surge of coronavirus’.

It is thought that Bank of England bosses will pump more than £150billion of extra money into the economy as the country enters its second nationwide lockdown.

Mr Sunak is also expected to announce that the 80 per cent furlough scheme will continue beyond December 2 in any area of the UK that faces Tier 3 restrictions.

His address to MPs will come after he said in a letter to the Treasury Select Committee that the four-week shutdown will inevitably cause fresh damage to UK companies.

It is unclear whether Mr Sunak will announce new support measures or whether he will simply be confirming what has already been put in place.

The Bank of England is planning to introduce a much bigger programme of quantitative easing than the £100billion cash injection expected, sources told The Sun.

The figure, which will be announced in a policy update at 7am, is instead likely to be around £150billion but could be as high as £200billion.

This would mean that the quantitative easing measures for handling the financial strain of the coronavirus crisis would reach nearly £1trillion.

The England-wide lockdown will see all pubs, bars and restaurants closed while non-essential shops will also be forced to shut.

The Chancellor is under mounting pressure to bring forward additional help to keep struggling firms afloat.

It is thought that he will lay out how the furlough scheme, which was extended until December 2 to pay 80 per cent of wages, will continue beyond the end of the nationwide lockdown in localised, Tier 3 areas.

And Mr Sunak is expected to announce that the 80 per cent wage subsidy scheme will be on offer for specific regions hit by Covid restrictions.

It comes as Mr Sunak is facing calls to publish Treasury forecasts on the potential impact of the new lockdown on the economy.

In a letter responding to a request from the Treasury Select Committee for an impact assessment, Mr Sunak said while there will be a hit from the latest restrictions, it is likely to be different to that seen after the spring lockdown.

But he signalled the new lockdown will heap more misery on Britain’s jobs market and battered company balance sheets.

He said: ‘The further restrictions announced by the Government will have significant additional impacts on the economy and society.

‘However, the Government’s policy is not the same as the previous national restrictions and nor is the environment in which these restrictions are coming into force.’ 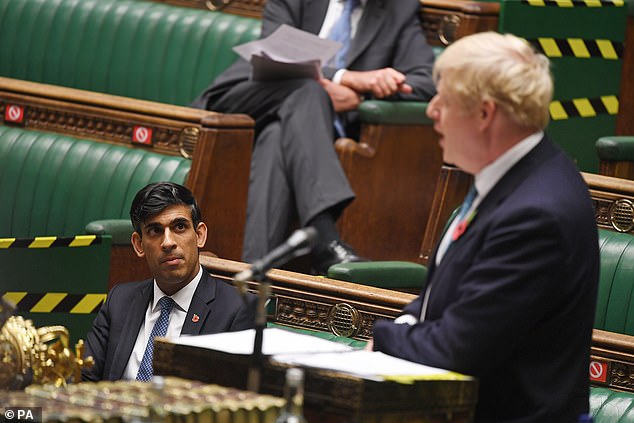 He added: ‘Some businesses may be more prepared for working from home than was the case prior to previous restrictions, while the labour market enters these restrictions in a weaker state than in March, and so do corporate balance sheets, including in the worst-affected sectors.’

Mr Sunak batted away demands from the committee for details on the economic impact of the lockdown which will start tomorrow and last until December 2.

The Treasury yesterday admitted that no formal assessment of the economic cost of the shutdown has been produced.

The committee had written to Mr Sunak calling for the publication of the work his department has carried out on the lockdown.

But the legislation underpinning the new restrictions stated ‘no impact assessment has been prepared for these regulations’ and the Treasury said any analysis conducted under the present conditions would be ‘uncertain and imprecise’.

Mr Sunak told the committee that the Bank of England would be providing its latest forecasts for the economy tomorrow, while the fiscal watchdog – the Office for Budget Responsibility – will give its assessment on November 25.

Mr Stride said it was ‘essential’ the Treasury publishes work carried out on the potential hit to the economy.

He said: ‘Whilst the Chancellor has stated that HM Treasury does not prepare formal forecasts on the UK economy, this is not what the Treasury Committee is requesting.

‘We know from the Sage minutes that work has clearly been carried out by HM Treasury on the economic impacts of interventions under the auspices of the Government’s chief economic adviser.

‘It’s essential that the Treasury publishes this work, and that must be made available for public scrutiny ahead of today’s vote.’