Rival vaccines being developed by Oxford and Imperial may be combined to beat coronavirus, expert says

Two rival vaccines being developed by competing British universities could end up being used together to provide lasting immunity to coronavirus, according to one of the experts leading the charge.

Oxford University’s vaccine was first out of the blocks and is already being tested on at least 1,000 people across the UK, while Imperial College’s jab only started human trials last week.

But Professor Robin Shattock, who is masterminding the Imperial project, said that although the two vaccines were being seen as rivals, ultimately they could well be used together because the way they work differs.

While the Oxford vaccine was ahead in the race to protect against Covid-19, he said it could be limited by an inability to be used on the same person time and time again.

However, Prof Shattock believed it would be possible to use the Imperial jab to bolster an individual’s immunity ‘multiple times’.

Scientists around the world increasingly think booster jabs will be needed to maintain protection against the virus that causes Covid-19, as initial immunity provided by a vaccine may well fade over time.

Last Tuesday Pascal Soriot – chief executive of pharmaceutical giant AstraZeneca, which has partnered with Oxford to produce a billion doses of the jab – fuelled those fears when he said he was confident the jab would provide immunity for ‘about a year’.

Natural immunity to other coronaviruses, which cause common colds, is thought to last from several months to a couple of years. 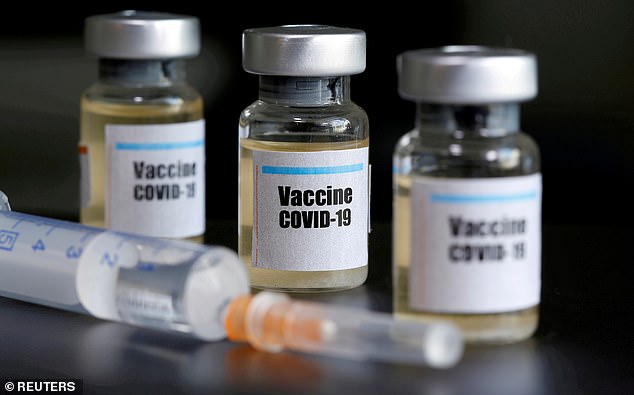 The potential flaw with the Oxford vaccine is that it uses a harmless virus as a microscopic Trojan horse to smuggle in tiny fragments of Covid-19 coronavirus RNA – the bug’s genetic blueprint.

The recipient’s immune system learns to identify this RNA as foreign, and so creates antibodies to protect against it. But experts fear that if a person is subjected to multiple doses of this jab, their body might ‘mistakenly’ develop an immune response to the Trojan horse virus itself – called an adenovirus – thus rendering it useless. As the Imperial vaccine does not use a virus as the means of smuggling in RNA, it should avoid this problem, said Prof Shattock.

Speaking in a webinar organised by the Royal Society of Medicine, Prof Shattock said the Oxford vaccine was ‘very good to be able to give an initial immune response, but it has its limitations in that the ability to reboost immunity may be less good than other approaches’.

By contrast, he said: ‘The approach that we are developing allows you to re-boost multiple times.’ He continued: ‘We are often pitted against each other, or seen to be in a race against each other, but actually we are collaborating very closely together, exchanging material, and the two approaches may well be able to be used together, in a “prime, boost” approach.’