River Mimram turns PURPLE with pollution, hours after environment ministers posed in front of it

River Mimram in Hertfordshire turned purple with pollution, just hours after environment ministers posed in front of it over plans to restore rare chalk streams.

When environment Minister, Rebecca Pow and members of the Chalk Stream Restoration Group visited the river yesterday, it was a clear looking stream.

Not long after they left, the chalk stream, that runs through North Hertfordshire from Hertford, turned a shade of purple, according to pop star and clean river campaigner Feargal Sharkey, who shared an image of the stream on Twitter.

The Environment Agency said the river had already returned to normal when it returned to investigate, and found no evidence of any harm to fish from the incident.

They can’t say what caused it to turn purple, but campaigners speculate it could be anything from an algae bloom to dyes seeping into water from industry.

River Mimram in Hertfordshire turned purple with pollution, just hours after environment ministers posed in front of it over plans to restore rare chalk streams 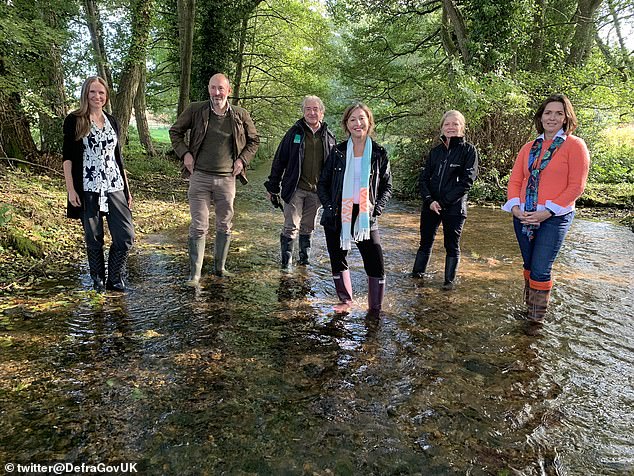 When environment Minister, Rebecca Pow and members of the Chalk Stream Restoration Group visited the river yesterday, it was a clear looking stream

WHAT COULD HAVE TURNED THE RIVER PURPLE?

The Environment Agency says it can’t say what caused the river to turn purple, and had already returned to normal when they investigated.

Campaigners put forward a number of ideas for what may have caused the river to become purple.

The water should be ‘utterly colourless, so clear you can count ever pebble and piece of gravel on the riverbed,’ say campaigners.

Some speculations for the cause include an algae bloom, the rapid increase or accumulation in the population of algae in freshwater or marine water systems.

Another suggestion was dyes seeping into the water from industry.

This could be products used within dairy farms, and through to actual dye from manufacturing.

Sharkey, who sang with the band The Undertones, took to Twitter, saying: ‘Just hours after the great and the good were last seen using the River Mimram (a chalk stream) as a backdrop here what it looks like today. Polluted. It’s turned purple.’

He added: ‘So much for fine words and speeches all of it devoid of intent and delivering even less.’

The ‘great and the good,’ as Sharkey called them, including Environment Minister Rebecca Pows, and chair of the Environment Agency, Emma Howard Boyd.

They were at the site to promote the launch of a campaign to clean up chalk streams, like the River Mimram and meet with members of the Chalk Stream Restoration Working Group.

This group has put forward a set of recommendations to protect and restore England’s rare chalk streams, which are a ‘hugely important’ part of Britain’s environmental heritage.

The strategy outlines the current issues threatening chalk streams in England and what must be done to protect the three key indicators of ecological health.

These are: water quantity; water quality; and physical habitats, according to the Environment Agency.

It recommends enhanced status for chalk streams to drive investment to prevent pollution and over-abstraction, as well as restoring habitat to boost biodiversity.

Soon after they left the river had taken on a thick, goopy purple colouring.

Sharkey said: ‘The water should be ‘utterly colourless, so clear you can count ever pebble and piece of gravel on the riverbed, it’s supposed to be one of the rarest and greatest ecosystems on the planet.’

A spokesperson for the Environment Agency said they returned to investigate the claims the stretch of water had become polluted and turned purple.

‘The water was no longer discoloured, and we took water meter readings which indicated no negative impact on water quality or the environment, and we found no evidence of harm to any fish,’ the spokesperson said. 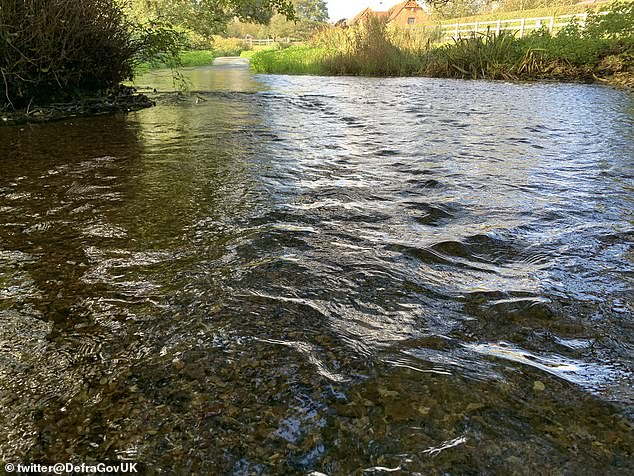 ‘We took further samples of the river [the next day], will visit again and will continue to monitor to ensure the good health of this chalk stream is maintained.’

Environment Minister Rebecca Pow said action is in progress wherever possible to tackle the problems facing these vital habitats.

Environment Agency Chair Emma Howard Boyd said 85 per cent of the world’s chalk streams are in England, and their future depends on collective action from water companies, farmers, and landowners as well as government and regulators. 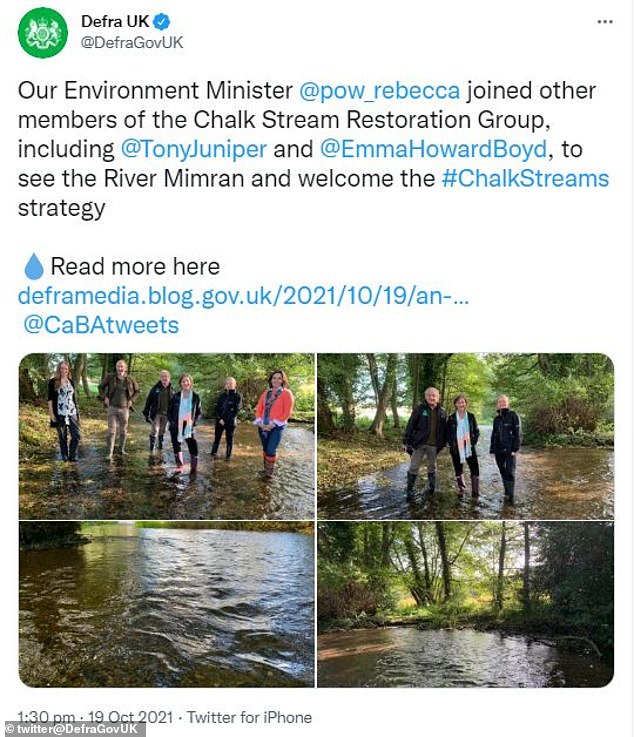 ‘The National Framework for Water Resources encourages water companies to open up new infrastructure to reduce reliance on chalk aquifers,’ she said.

Natural England Chair Tony Juniper said these are a unique natural feature, and as most rivers of this type are in England, the country has a ‘responsibility to ensure that they are in good health.’

‘These habitats are subject to a complex range of pressures, however, from pollution arising from road runoff, agriculture and sewage, to low flow resulting from abstraction for public water supply and physical damage to the water courses.

‘We look forward to working with others to ensure this new strategy leads to the kind of joined-up partnership action needed to address these pressures, protecting and restoring chalk streams for future generations to enjoy.’

WHAT IS A CHALK STREAM?

Chalk streams are a type of river that results from springs in landscapes with chalk bedrock, which is a much ore permeable material.

There is very little surface runoff, which results in the water in the streams containing little organic matter and sediment, and so is ‘generally very clear’.

They are good spawning areas for salmon-like fish species.

Of the 210 rivers classified as chalk streams globally, 160 are in England.