RNC made bulk purchase of $100,000 of Donald Trump Jr.’s book BEFORE it made bestseller list

Republican National Committee made bulk purchase of $100,000 of Donald Trump Jr.’s book BEFORE it made bestseller list – then claimed it was only keeping up with demand

The Republican National Committee purchased nearly $100,000 worth of Donald Trump Jr.’s book ‘Triggered’ a few days before it hit shelves, which critics insist is why his book performed so well in sales.

A spokesperson for the RNC told The New York Times that the single October purchased for $94,800, confirmed on a recent FEC filing, was an expenditure connected to promoting the book from Donald Trump’s eldest son.

The bulk buy ahead of the November 5 release date, many claim, could have contributed to the book’s swift rise to the New York Times best seller list.

However, even without the bulk purchase, the ‘Triggered’ would have clenched first place on the list by hundreds of thousands more than the second nonfiction best seller that week.

Democrats and critics of Donald Trump Jr. are pointing to a newly revealed FEC filing that shows the Republican National Committee paid nearly $100,000 to Books a Million for the purchase of the president’s son’s new book ‘Triggered’ 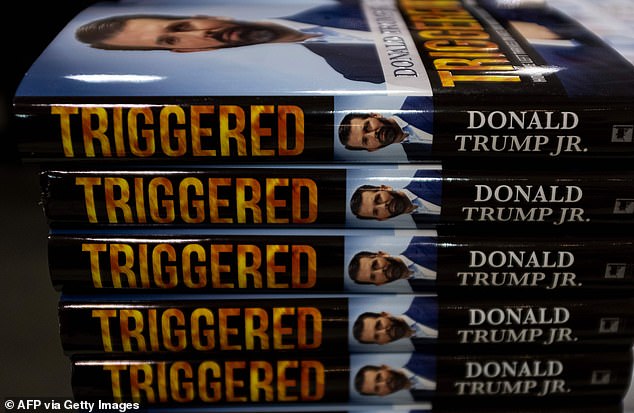 ‘Triggered: How the Left Thrives on Hate and Wants to Silence US,’ hit The New York Times’ best sellers list for the first two weeks, which critics insist was, in part, due to the RNC ordering about 10,000 copies 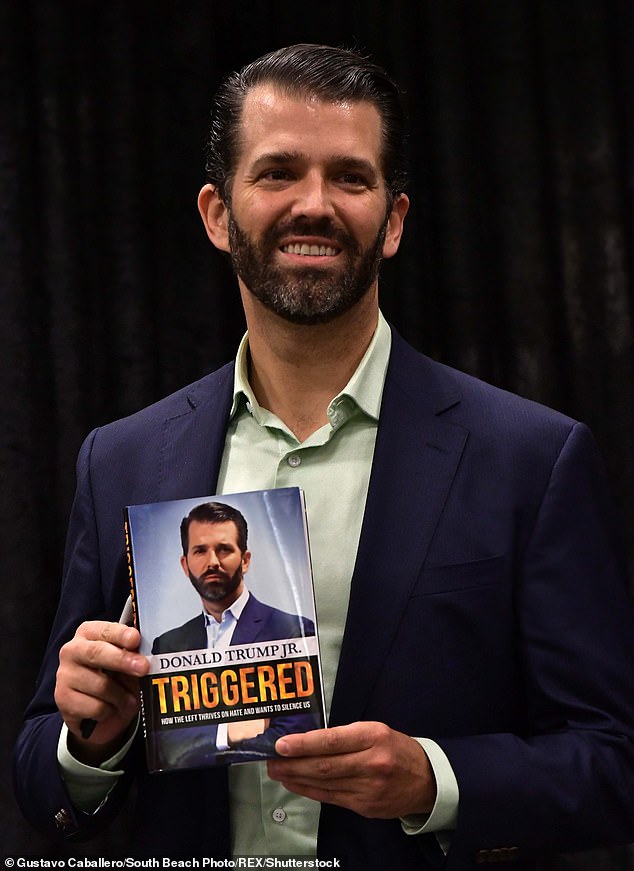 The RNC gave signed copies of those books away in exchange for individuals donating $50 or more – the book can be purchased for $17.98 on Amazon

‘Wow! Was just told that my son’s book, ‘Triggered,’ is Number One on The New York Times Bestseller List. Congratulations Don!’ Trump tweeted eight days after his son’s book was released.

‘Triggered,’ a great book by my son, Don. Now number one on @NYTIMES LIST. Keep it there for a while!’ the president posted to Twitter three days later.

The day ‘Triggered: How the Left Thrives on Hate and Wants to Silence Us’ hit bookshelves, the GOP sent a fundraising email promising it would send signed copies of the book in exchange for donations of $50 or more.

An unsigned hardcopy version of the book can be purchased on Amazon for $17.98.

Many criticized the Republican Party, claiming it was using the stunt to boost sales for the Trump Organization’s Executive Vice President’s first book.

The RNC confirmed this month that it netted more than a half million dollars by giving signed books away in exchange for contributions to the party.

Previously, a spokesperson for the RNC told the Times that they had not made any ‘large bulk purchase’ of the book, but ‘are ordering copies to keep up with the demand.’

In tweets sent three days apart, Donald Trump praised his son for his success in sales. ‘Keep it there for a while!’ he urged

Don Jr. has been open about the RNC’s purchase of roughly $10,000 copies, and a spokesperson for the president’s son noted to DailyMail.com that the first week’s overall sales were $71,000, which still more than doubles the No. 2 New York Times bestselling book on the list.

Experts have noted that even Don Jr.’s second week of book sales have surpassed former U.S. Ambassador to the European Union Nikki Haley’s first week of sales for ‘With All Due Respect,’ – ‘and it wasn’t even close. (With or without bulk sales.),’ known Javelin literary agent Matt Latimer tweeted.

Also on Amazon, which doesn’t provide bulk ordering of books, Don Jr. had the best selling nonfiction book in the first week and during its second week of sales moved to the No. 2 spot, second only to the self-help book ‘Talking to Strangers’ by Malcolm Gladwell, which has been on the best selling list for 12 weeks.

The No. 3 spot is held by Haley for her recent book.