A road in Mexico has been filmed still moving ‘as if breathing’ after a 7.1 magnitude earthquake devastated the country on Tuesday.

The cracked tarmac oscillates up and down as if being pushed by the mighty lungs of the earth in Morelos, Mexico.

The moving road gave yet another sign to locals, still reeling after the earthquake, of the seething power hidden within the earth’s core.

People ran down the road but stopped when they saw the unstable, moving road surface.

Locals gathered to watch the phenomenon, many too nervous to cross it, as some vehicles and pedestrians gingerly made their way across the damaged tarmac.

Tuesday’s quake was centered in Puebla state, where it killed more than 40 people. Across Mexico it killed at least 233 people.

Rescuers dug today for survivors as the nation watched anxiously for signs of life at a collapsed school in the capital where 21 children – aged between seven and 13 – and five adults were crushed to death. Many children were still missing.

Rescue workers were desperately trying to reach several children believed to be alive beneath the wreckage in the early hours of Thursday – some 36 hours after the quake struck.

Using a thermal scanner, they had located signs of life in several locations.

So far, 11 children and at least one teacher have been rescued from the rubble of the Enrique Rebsamen elementary and middle school. 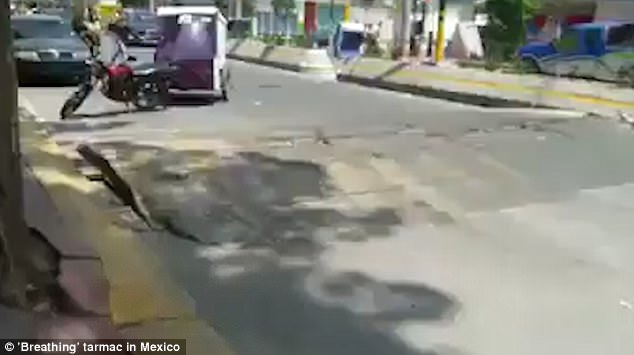 The road in Mexico was filmed still moving ‘as if breathing’ after a 7.1 magnitude earthquake devastated the country on Tuesday 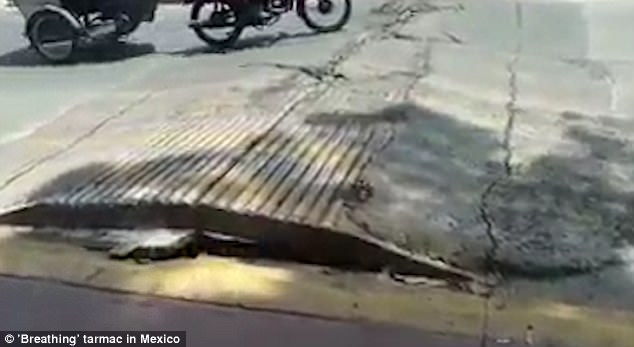 Many people stopped at the side of the road, too nervous to cross, while a few vehicles and pedestrians gingerly crossed the unstable tarmac

Earthquakes shake the ground, moving rocks, stones and earth which can sometimes create holes beneath a seemingly solid surface which can then fill with air or water.

The video has sparked a conversation online, with many people commenting on Facebook about what could have caused this phenomenon.

Scott Lenharth wrote: ‘They had something similar during the Japan earthquake in a park which caused soil liquefaction where water is squeezed out the cracks

Vickie Flores wrote: ‘I think that may be the ocean underneath the road. Be careful as it could collapse and become a very large sink hole!’

And Craig Valentine wrote: ‘It’s the tree swaying away from the crack and it’s roots lifting the road surface.’

The earthquake hit Mexico on the anniversary of a huge quake in 1985 that killed more than 10,000 people, the country’s deadliest ever.

It struck just two hours after Mexico held its annual national earthquake drill on September 19 to remember the 1985 disaster.

It unleashed its devastating power just 12 days after another quake killed nearly 100 people in southern Mexico. 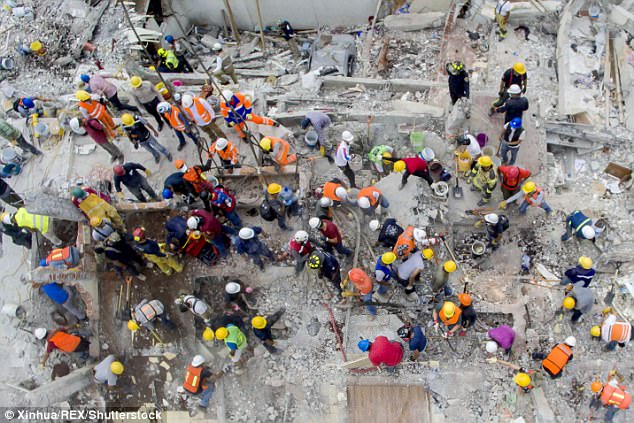 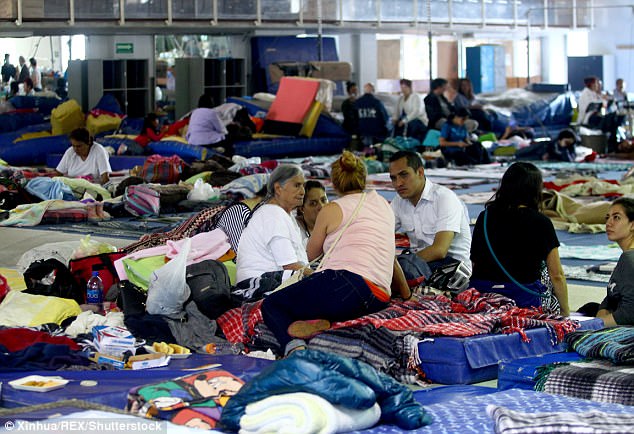 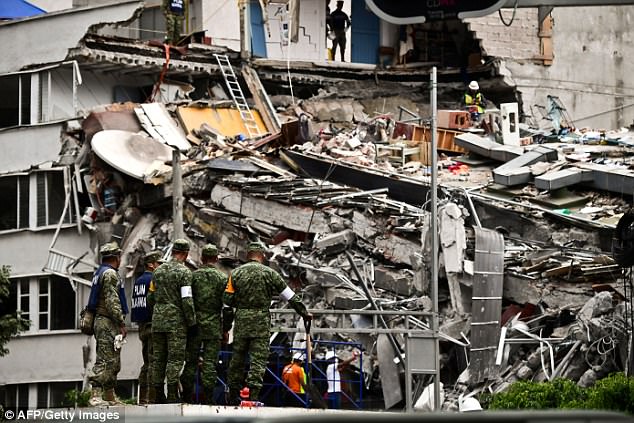 Scenes of destruction: Rescuers searched for survivors amid the rubble from a building flattened by the 7.1-magnitude quake on Tuesday in Mexico City

Experts said the two quakes did not appear to be related, as their epicenters were far apart.

Thousands of volunteers have rushed to rescue others still missing or trapped since the quake.

Businessmen in ties, students in jeans, doctors in scrubs and other ordinary people from all walks of life have joined professional rescue teams in rushing onto and into the mangled remains of homes, schools and offices in Mexico City, desperately trying to reach survivors before it’s too late.

The outpouring of sympathy has been overwhelming – too much for the authorities to deal with at times.

Volunteer rescuers are now being turned away at many sites if they do not bring their own helmets.

And appeals have gone out for residents of the capital to stop giving perishable food items and water, which have already been donated in abundance.

‘Food is going to waste, we don’t need any more water. We have a list of medicines and supplies that we need instead,’ a soldier at one site said through a megaphone in Mexico City’s upscale Condesa neighborhood.