An enraged driver threatened to ‘smash’ a motorcyclist’s face in the middle of a busy road because he and his learner daughter were doing 20mph in a 40mph zone.

Richie Curtis, 49,  from Saint Albans, captured the moment the irate driver steps out of his white Ford and threatens to fight him in front of horrified passers-by in Boldon, South Tyneside.

The furious driver holds his fists up in the air for a fight before walking over to the pavement and telling the puzzled motorcyclist to: ‘Go back home!’

Body-cam footage filmed by Mr Curtis shows the unnamed driver hurl a series of verbal abuse at the motorist and continuously sound his horn as he approaches a roundabout.

The angry driver emerges from his car and raises his fists because the motorcyclist is doing 20mph in a 40mph zone  in Boldon, South Tyneside 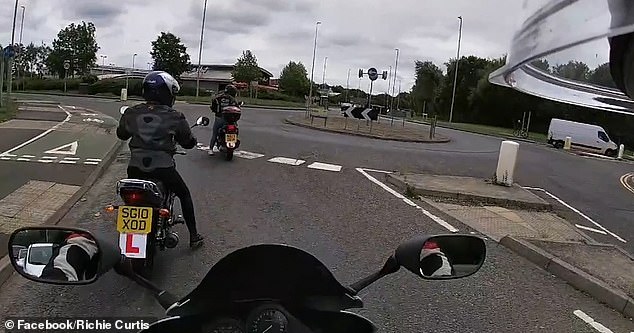 Richie Curtis, 49, from Saint Albans, approaches a roundabout with his learner daughter and a friend when he hears the irate driver beeping his horn behind him 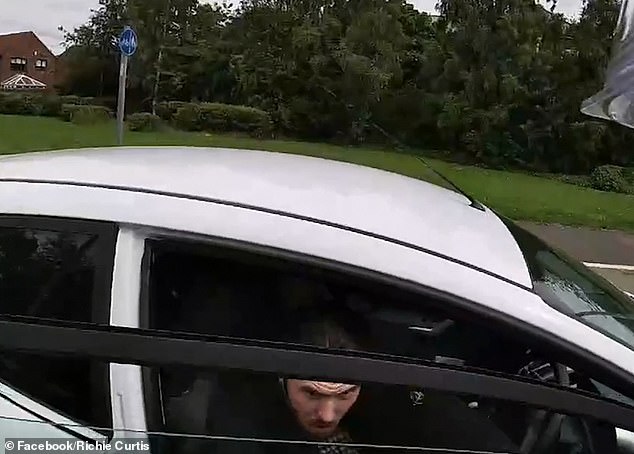 As they pull up to the roundabout, Mr Curtis dismounts his bike and confronts the driver asking: ‘What’s your f***ing problem?’

The angry driver, who is wearing a chequered shirt, black shorts and a black jacket, emerges from his car and gestures to the motorcyclist to walk to the pavement so they can fight as a line of cars wait behind them.

He holds his fist up in the air and tells Mr Curtis: ‘Go back home you southern f***ing c***’.

Mr Curtis explains he has a learner with him but the man refuses to listen and tells him: ‘You better f*** off away from me or I’m going to smash your f***ing face in.’

The video, which was uploaded to Facebook on Tuesday, has gained more than 1.5 million views on social media. 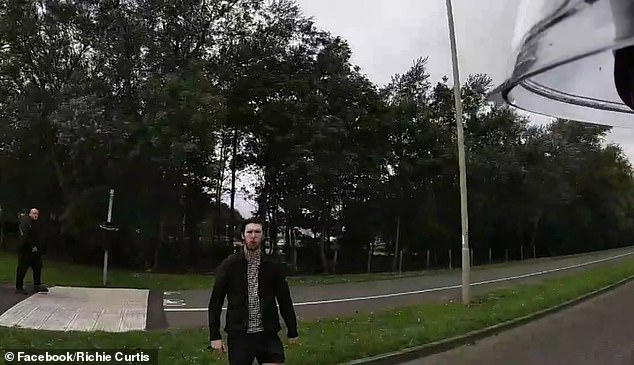 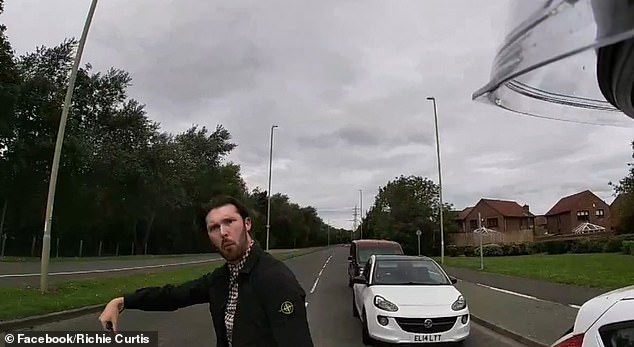 ‘I am assisting my friend in front as she passed her CBT in January and this was her first time on the bike due to covid and she was very nervous and struggling with the gears when this guy gets inpatient from behind and start blowing his horn and tale gating me.

‘The rest you can see in the video.

‘I’ve got my eldest daughter in front on a 50cc and then my friend on a 125 but she hasn’t ridden since she passed her test in January then and also my youngest on the back with me.’

Mr Curtis later posted the video on Facebook with the caption: ‘Let’s make this d**k head Facebook famous, I’ve got my eldest daughter in front on a 50cc and then my friend on a 125 but hasn’t ridden since she passed her test in January then and also my youngest on the back with me.

‘Then the p**** behind me can’t wait 10 seconds. See for yourself. If you know this oxygen thief please feel free to name and shame.’