A ferocious exchange of rarely-seen pre-mating behaviour between an Asiatic lion and lioness saw the female roaring and taking swipes at the male.

Photographer Urmil Jhaveri, 29, was on hand to capture the fierce spat as others watched on from nearby cars in Gir Forest, Gujarat, India.

In the incredible footage the lioness can be heard roaring at the male as he comes towards her and she begins to jab her large paws at his face.

A lion and lioness engaged in a ferocious showdown with the female roaring and taking swipes at the male in Gir Forest, Gujarat, India

The lion calmly blocks her swipes as the female continues to bear her teeth at him and he starts to back away from her on the track road.

After her angry outburst, the lioness bows her head and starts to lie down before the lion moves and she roars at him once again.

There are only several hundred Asiatic lions left in the world and they only live in the Gir Forest, which is smaller than Greater London.

Nature photographer Mr Jhaveri, 29, said: ‘This place is very much close to my heart and I am attached to it emotionally as well. 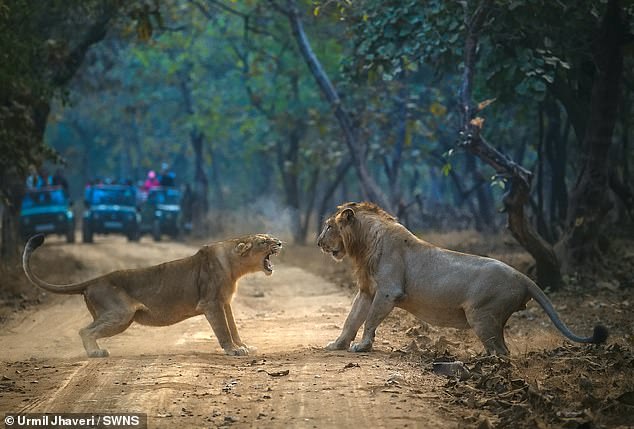 The lioness gave the onlookers a show, using her impressive roar and repeatedly hitting the lion as he approached her 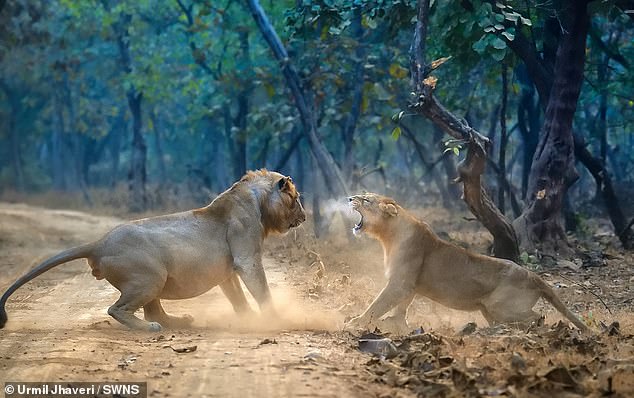 ‘This video shows the fight between male & female Asiatic lions. It’s a pre-mating behavior of lions and part of their life but can be seen rarely in the wild.

‘I am observing & documenting Asiatic lions since close to nine years now and never ever came across such moment.

‘I am thrilled and super excited having filmed this moment.’

Male Asiatic lions tend to live away from the females of their pride unless mating or they have a large kill.

The endangered species used to be found across Asia but their numbers dramatically depleted after being hunted for sport.