As a lively six-year-old, her parents encouraged her to get into football to burn off excess energy where she played alongside ‘rough’ boys and ‘kicked bits out of them’.

Now that spirit has catapuled Lioness Beth Mead, 27, to the top of her game in 2022 – with her momentous year culminating in her being BBC’s Sports Personality of the Year last night as her proud girlfriend and Arsenal teammate Vivianne Miedema looked on.

Yorkshire-born Beth has joked that the couple are the Posh and Becks of women’s football and ‘the lesbian world’, but admits that it was hard to be a gay teenager growing up ‘in the middle of nowhere’.

And while she’s said her parents ‘maybe struggled’ when she first came out, they could not have been more supportive of her football career with her mother June, a higher level teaching assistant, and father Richard taking on extra shifts to pay for petrol to drive her to training.

Meanwhile, Beth took on a waitressing job and worked double time behind the bar on weekends so that she could earn enough for her first pair of football boots.

Meanwhile her standout success came just a year after the devastation of being left out of Team GB’s squad for the Olympics in Tokyo, and at the same time of her mother’s battle with incurable ovarian cancer.

Beth grew up in Hinderwell, a village between Saltburn and Whitby in North Yorkshire, which she has previously described as being in ‘literally the middle of nowhere’.

Her love for sport was clear from a very young age, with TeesideLive reporting she began playing football with her small village’s boys team at just six-years-old.

During last night’s programme, she said: ‘For me, football has been my first true love.

‘My mum sacrificed so much, she worked two jobs. I wouldn’t be where I am today without it.’ 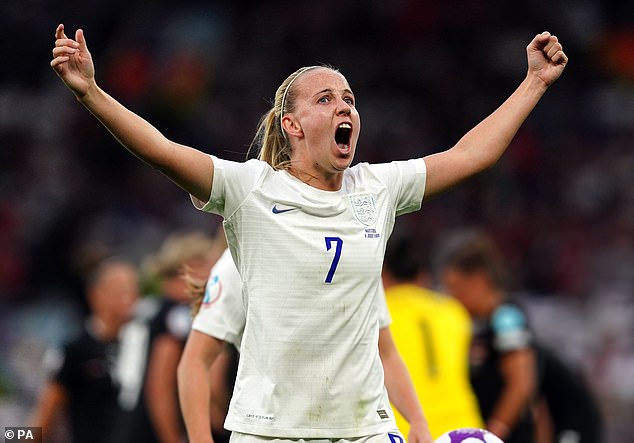 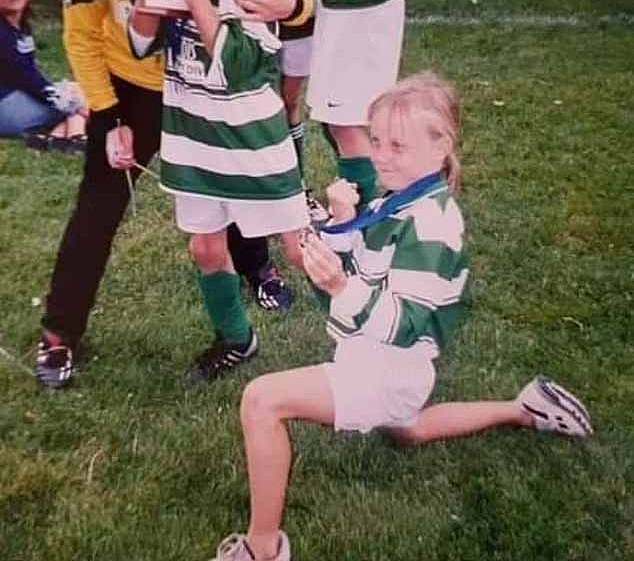 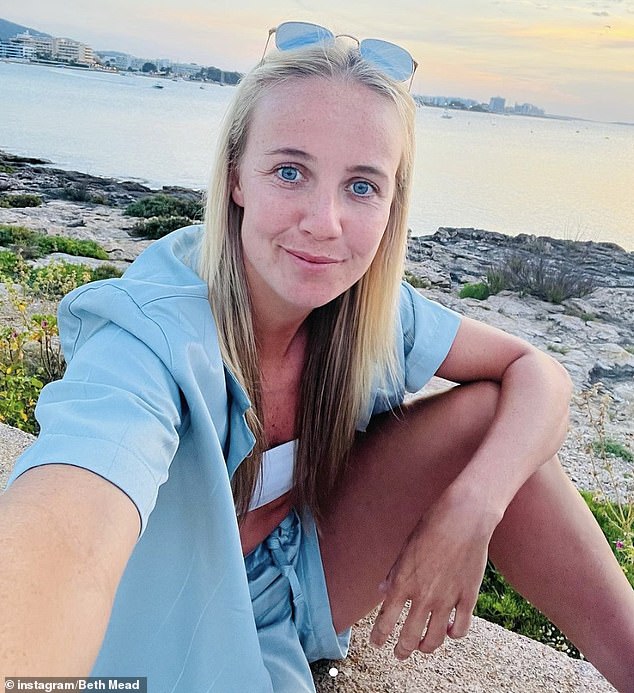 The 27-year-old was rewarded for her contribution to the Women’s European Championships. She paved the way for the Lionesses’ first ever international trophy with six goals in six games 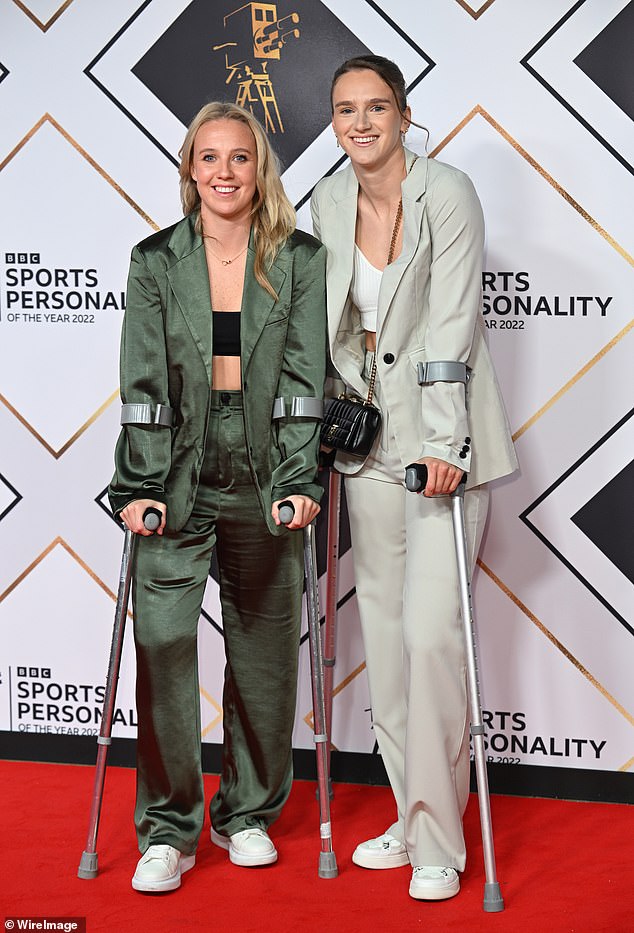 Beth – who has a younger brother called Ben – says her parents encouraged her to get into the sport to ‘get rid of some extra energy’.

When her mum dropped her off at a local boys’ training session they were warned it might be ‘too rough’ for her.

Beth previously said: ‘When she came back an hour later, he [the coach] basically said I was rougher than most of the boys!’.

She quickly moved on to the Middlesbrough Girls’ Centre of Excellence – prompting her parents to pick up extra shifts at work to cover the cost of petrol for the 45-minute drive they were making several times a week.

Beth later described her parents as ‘big people who have influenced my footballing career’.

By the age of 16 Beth was signed to Sunderland – where she scored 77 goals in 78 games. 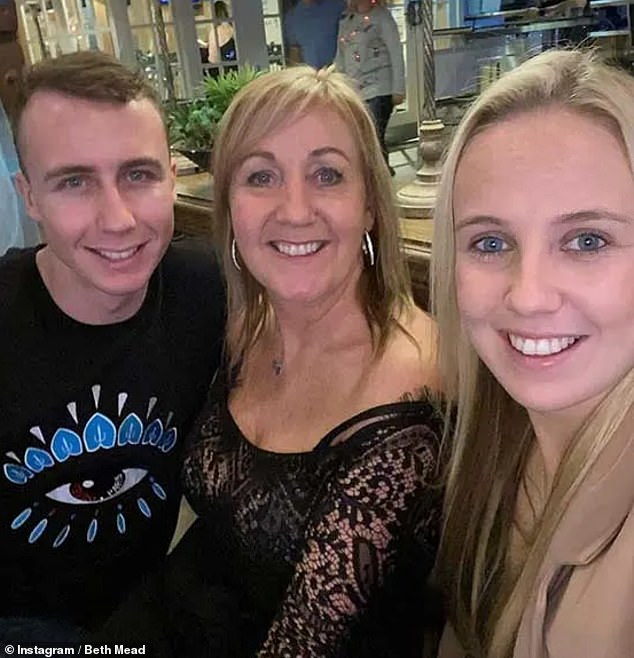 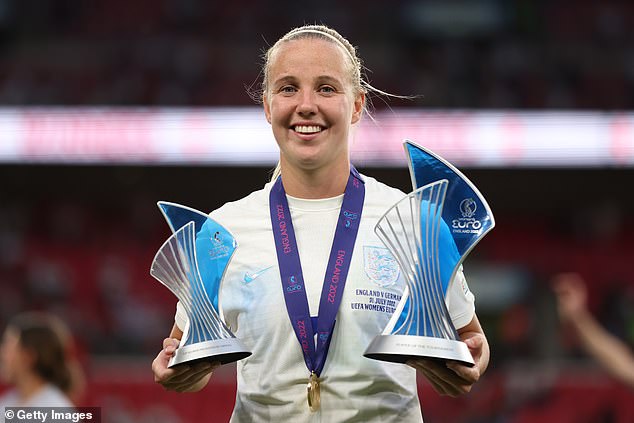 Beth grew up in Hinderwell, a village between Saltburn and Whitby in North Yorkshire

Alongside her training, Beth also picked up shifts in the local Fox and Hounds pub in Staithes near Whitby.

Speaking to ITV News in July, Beth’s former employer Irene Ward recalled: ‘Customers liked her. She was easy to get along with. She was absolutely dedicated to her football, that was all she lived for.’

What’s more, the pub landlord explained how Beth used her pay cheque to further her career.

She added: ‘I remember when she bought her first football boots, and she was absolutely thrilled because they were £100.’

Beth added: ‘I used to work Friday, Saturday. Sunday was double time behind the bar. I was a waitress part time just to afford the boots. I enjoyed working there and I got my boots in the end.’ 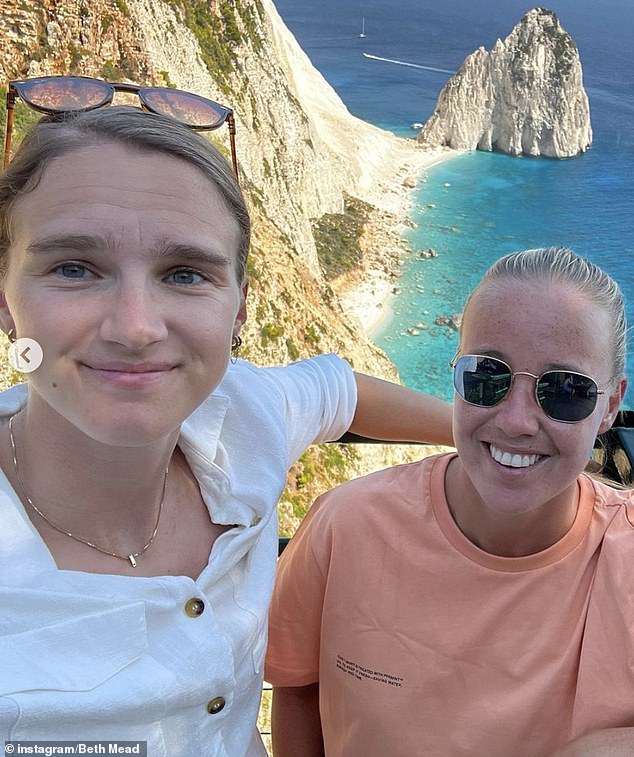 Now, she is part of the Arsenal Women’s team – with her partner Vivianne Miedema (above) 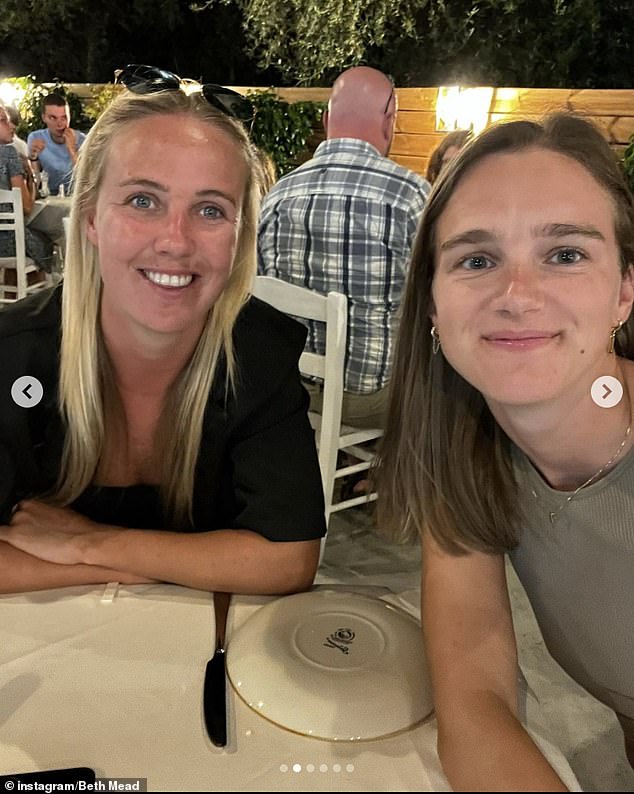 Beth confirmed her relationship with the Dutch striker after the Euros this summer, joking that they are the David and Victoria Beckham of women’s football – and ‘the lesbian world’

Beth was handed her first full England cap in 2015, when she was studying at Teesside University. She made her first senior appearance with England in April 2018.

However last summer she was left out of the Team GB Olympic squad and had also been dropped from the England set-up by interim boss Hege Riise.

Mead has spoken openly about how missing that tournament affected her mentally but it was at the Euro 2020 final where some former England players offered words of wisdom.

She said: ‘I had a few good conversations with some England legends, I think there was Casey [Stoney], Kelly Smith, I spoke to a few of them. Obviously I was a little bit disappointed. They just told me to get my head down, work hard and get my enjoyment in my play again.

‘‘I’ve had difficulties off the pitch this year but I’ve had a lot of support around me that helped me. I guess I’ve used my football to get rid of the emotions that I’ve had off the pitch. I think football is my safe space, a place for me to escape sometimes.’

The difficulties were deeply personal for Beth.

During last night’s programme, Beth and her father both described how her mother June’s cancer battle had impacted her sporting career.

Her father said: ‘2021 was a difficult year. We found out that her mam was suffering from ovarian cancer.’

Beth added: ‘Nearly a year down the line, we found out it was incurable. She is still fighting.’

Richard said: ‘The diagnosis with her mam, that was a trigger to show the world what Beth Meade was all about.I think in the Euros she managed to do that.’

Mead has always said she plays better when she is angry and that the bitterness of missing out on the Olympics was the driving force behind her form for Arsenal and England this year.

Now, she is part of the Arsenal Women’s team – with her partner Vivianne Miedema.

Beth confirmed her relationship with the Dutch striker after the Euros this summer, joking that they are the David and Victoria Beckham of women’s football – and ‘the lesbian world’.

Speaking to Sky Sports, Beth explained how she struggled with her sexuality as a teenager.

She said: ‘When I was growing up, where I came from, there weren’t many people I knew that were openly gay or bisexual.

‘My parents, at the time, maybe struggled in the beginning and it was something that was hard for me to say.’

However, the star says she never publicly confirmed her sexuality and instead started posting photos of Vivianne on social media.

‘It’s a tough process,’ she said. ‘It is emotionally and physically draining, and I get all aspects for people, but for me, you can’t help who you fall in love with and if you are happy at the end of the day.’ 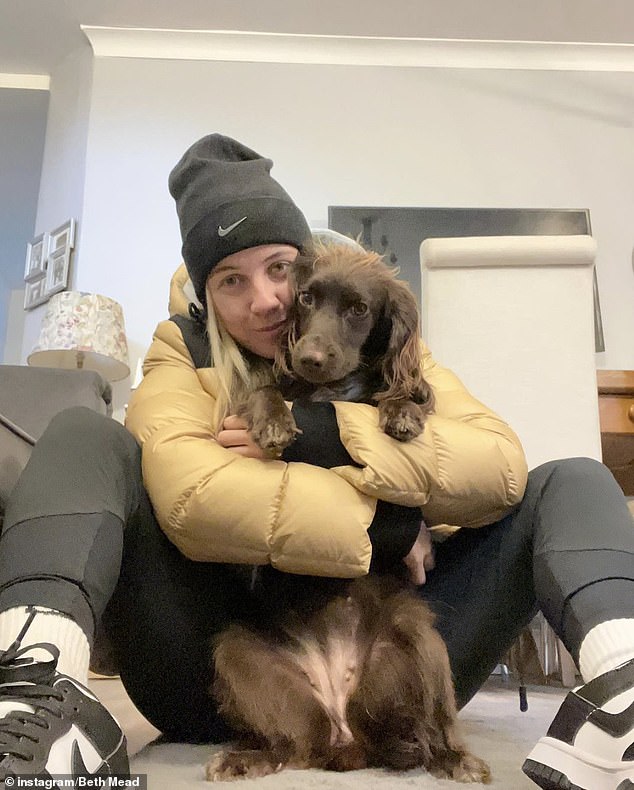 It was Beth’s contribution to the Lionesses’ Euros win that shot the Women’s Super League forward to stardom, and likely secured her the prestigious award 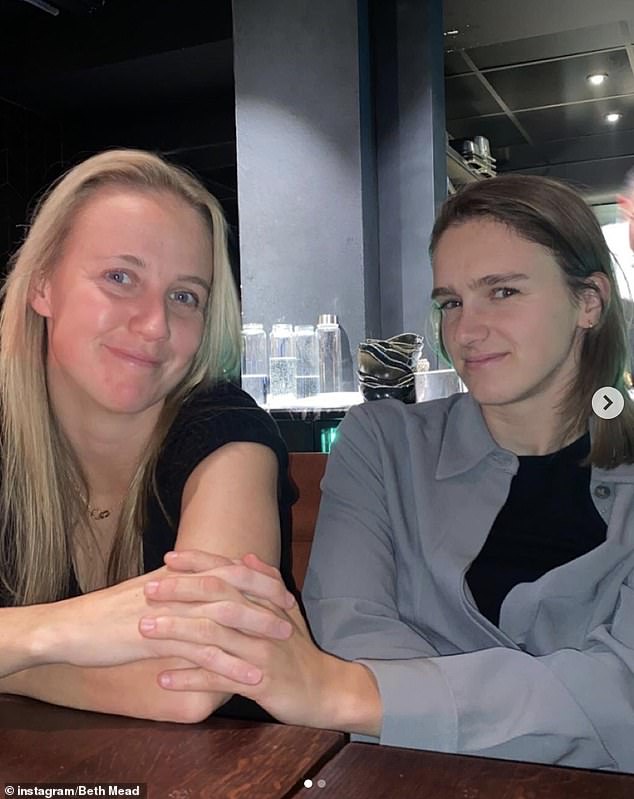 Vivianne attended the SPOTY show in Salford with Beth on Wednesday night.

It was Beth’s contribution to the Lionesses’ Euros win that shot the Women’s Super League forward to stardom, and likely secured her the prestigious award.

She scored an impressive six times in six games, including securing the deciding goal in England’s opening game of the tournament against Austria.

Beth then scored thrice in the Lionesses’ 8-0 win over Norway – and again against Northern Ireland.

The forward was named player of the tournament for her efforts, and Beth has since described how her life has changed.

In her book, Lioness: My Journey to Glory, she talks about going on holiday with Vivianne after her first TV appearance post-Euros. 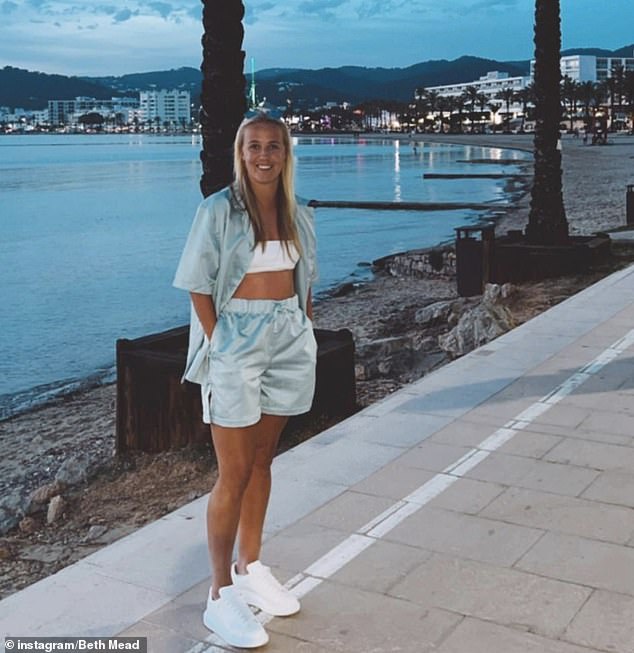 While 2022 will likely go down as one of the best years of Beth’s life, it has not been without struggles 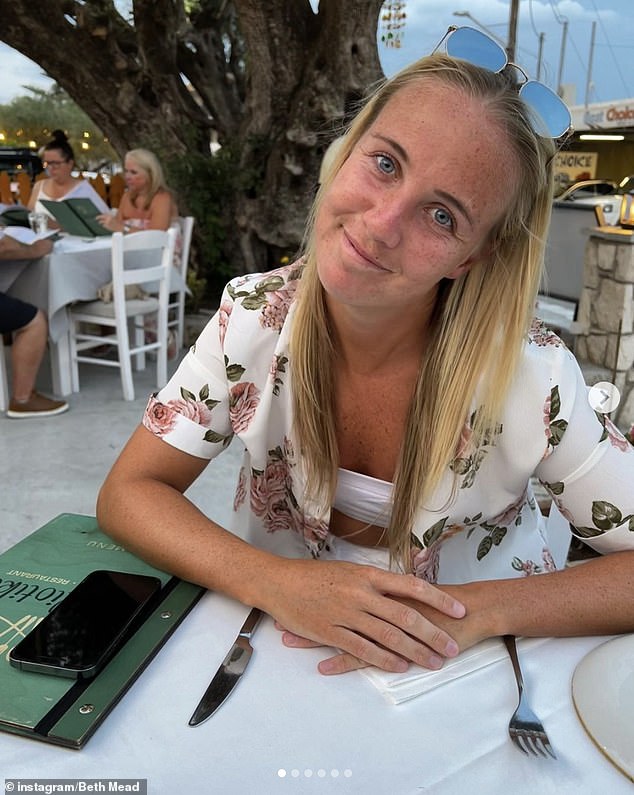 Her mother, June, has been in and out of hospital as she continues to battle cancer

‘Walking through the town square each evening, English tourists kept stopping me’, Beth wrote. ‘One night, a restaurant owner interrupted us to say that a family who had just left had paid for our meal.’

What’s more, Beth opens up about being recognised in the street following the Lionesses’ win in her book.

The forward was doing a photoshoot outside the Emirates when a dustbin wagon pulled over and its driver began chanting: ‘Meado! Meado!’

Speaking to The Times earlier this year, Beth said it’s been a struggle to adapt to the fame that has followed the landmark win.

She said: ‘After the final I did a press conference and they said, “Trailblazer, iconic, blah, blah, blah,” and to me, I’m still Beth Mead. I’m my mum’s daughter, do you know? That’s me.’

And during last night’s programme, she confessed a sadness about her mother’s prognosis.

She said: ‘I know I’m not gong to share all them moments with my mum anymore, so to share that moment with her last summer was just incredible.’ 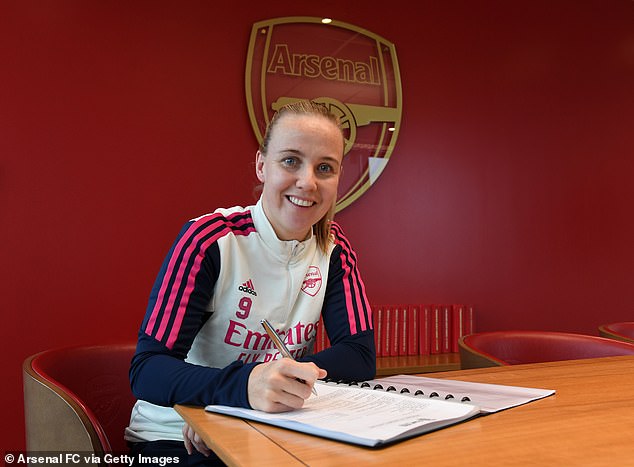 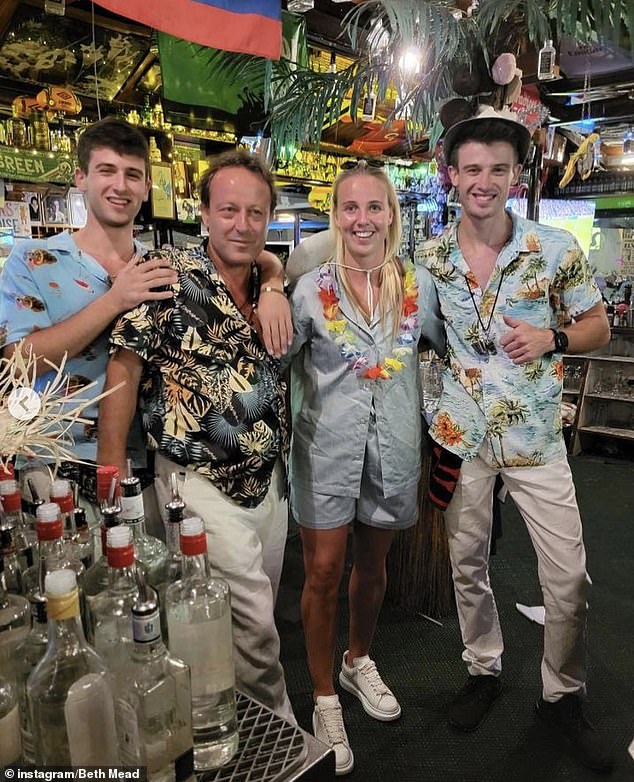 An ACL – or anterior cruciate ligament – injury affects one of the key ligaments that help stabilise the knee joint. It is one of the most common types of knee injuries and can take several months to recover fully from.

It was announced last week that Beth – who suffered her injury in a 3-2 defeat against Manchester United on November 19 – had signed a new contract with Arsenal.

‘I’m so happy to have signed a new deal with Arsenal,’ Mead said. ’This club is home for me – I’ve grown so much here as a player and a person and I know we can achieve so much more together in the years to come.

‘I want to compete to win the biggest trophies in the game and I know that the ambitions at Arsenal match my own, so I can’t wait to get back onto the pitch and help to deliver the success our supporters deserve.’

Paying tribute to her family in her acceptance speech, Beth said: ‘I certainly wouldn’t have done this without my dad, my mum and all my family.

Meanwhile her father said: ‘Everything Beth achieves, she achieves for our family and for her mam.’

The future is surely bright for the footballer, who won SPOTY a year after another young female sports star – teenage US Open champion Emma Raducanu.