‘What are you going to do — drop me!?’: Rob Green reveals his row with Maurizio Sarri after Chelsea’s humiliating 6-0 loss at Manchester City last season… and how he worked out there were just 18 DAYS where training was different

Rob Green was in jubilant mood after the Europa League final in May. The goalkeeper did not play in Baku but gleefully lifted the trophy after Chelsea’s 4-1 victory over Arsenal.

The former England international celebrated the end of a distinguished career by parading the silverware in full kit, emulating John Terry’s antics after the 2012 Champions League.

The Chertsey-born shot-stopper did not make a single appearance for the Blues nor did he receive a winners medal, but he was clearly an influential player in the dressing room.

The 39-year-old has revealed he rowed with manager Maurizio Sarri after the 6-0 defeat by Manchester City in February.

‘I just spelled it out,’ Green recalled in an interview with The Athletic.

‘I told him, “You have no plan B. You’re a transactional kind of manager. The players in the group are not the kind to speak to you like this — they care very much but are scared to say something to you, like I am. I don’t care because what are you going to do — drop me?”‘

‘I spoke for 15 minutes. A lot of players said afterwards that they enjoyed me saying that: “You said what I wanted to say but I couldn’t say it”. Obviously, if they had, it could have affected their place in the team or their future at the club. 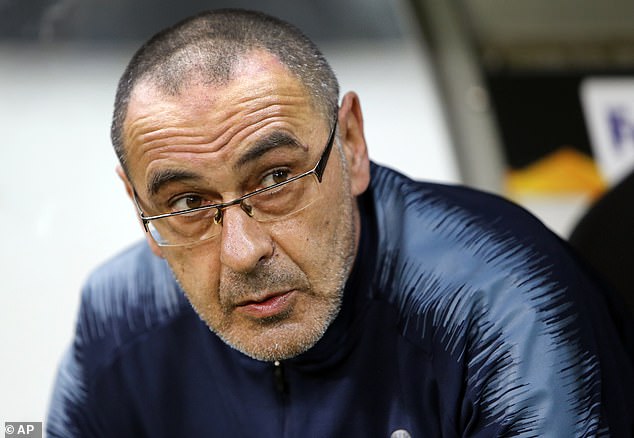 ‘He is an ex-bank manager and manages a club like one,’ Green states. ‘In his brain, there was a formula for success. It was like “I’m a mathematician, I’ve worked it out and I know.”

‘It is a good thing to have a coach with clarity and total belief in what they’re doing. There were times it worked — the problem is there are 11 people on the other team trying to do something to stop you.

‘The difficulty is when they figured out how. He was always going to struggle to change it because he only had one way. If it didn’t work, he’d just say we had to do his way better.

‘Training was very regimented. I remember Olivier Giroud and I sat down and figured out how many times we’d done exactly the same session. We worked out that over a course of the season, there were only 18 days where we hadn’t done the same thing. I can understand why people in the squad who just love and want to play football were thinking, “What’s the point of this?”‘