The video of the former stripped turned reality star performing an intimate sex act on an unidentified male was a trending topic on Twitter on Monday morning.

Chyna’s lawyer told TMZ she was taking legal action against the tape, in which the topless 29-year-old was clearly visible. She is currently single after her break-up with Rob.

One of Blac Chyna’s exes, Mechie, allegedly took to Instagram to claim he was the male in the video.

TheShadeRoom reposted a screen shot of a seemingly deleted post in which he complained about ‘having to deal’ with his private parts being posted online. 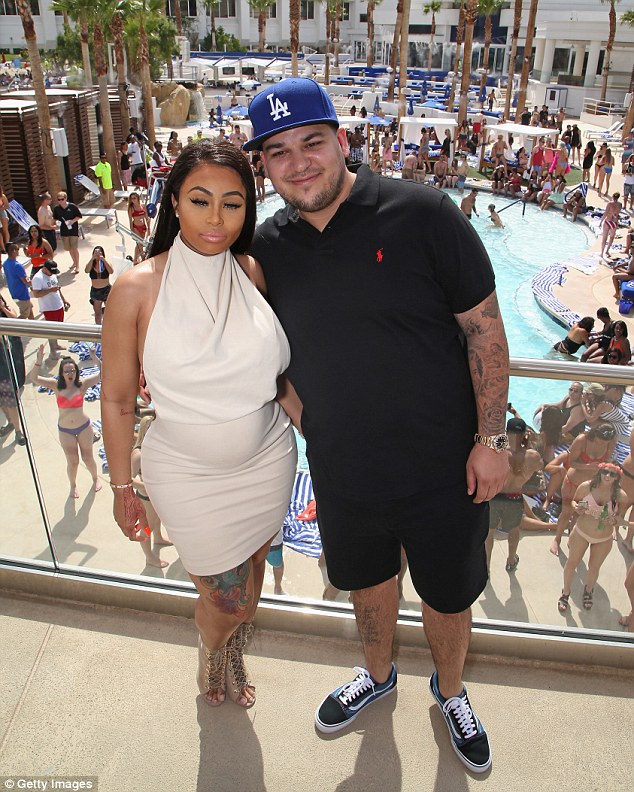 As they were: With then fiance Rob Kardashian in May 2016

Chyna is in the middle of a lawsuit against former fiancé Rob and his famous family, including sisters Khloe and Kim, half-sister Kylie Jenner, and mother Kris.

The beauty has accused the reality stars of conspiring to end her TV show Rob and Chyna, trying to destroy her career, and ‘coming after’ her after she split from Rob.

Her court documents stated: ‘The unwritten rule no one told (Chyna) when she began her relationship with Kardashian is that the entire family will come after you if you leave, using their fame, wealth and power to take you down, including getting your television show cancelled (despite great ratings), spreading lies about you, and even funding a bogus lawsuit about a crumbled gingerbread house.’

But the family previously moved to throw out a lawsuit filed by Chyna regarding Rob & Chyna, after they claimed the only reason the show was axed was because Chyna got a restraining order against 30-year-old Rob.

Their filing stated: ‘Given Plaintiff’s conduct in seeking and obtaining a restraining order that required Rob to stay away from Plaintiff and her workplace, no trier of fact could possibly find that it was reasonably probable that a second season of Rob & Chyna would have been picked up and filmed.’