A robot is being trained to recognise signs of dementia – by watching TV.

Robbie the Robot, believed to be the first gadget of its kind, binge-watched ITV soap opera Emmerdale to learn how to recognise facial expressions.

The machine monitored 65,082 images of the character Ashley Thomas – who developed dementia – from more than 13 episodes of the programme.

And they will now show it scenes from the sitcom Friends to help it learn about social interactions.

Robbie the Robot was shown more than 65,000 images of Emmerdale as it tracked the development of character Ashley Thomas’s development, and it can now observe 80 human behaviours and emotions

Robbie the Robot was designed by Dr Ardhendu Behera, a computer scientist at Edge Hill University in Lancashire, and his students.

It is shaped like a person and can walk and use its arms. It uses artificial intelligence to pick out human faces and observe their body language and behaviour.

The team hope it could help observe people with dementia or those suspected to be developing the disease, which affects around 47million people worldwide.

Robbie could watch for changes in their behaviour, mood problems, and monitor how active they are, how much they drink, and whether they take medication regularly.

‘Currently the only ways to monitor and manage dementia is by direct observation which is labour intensive, time consuming and can be costly from a care perspective,’ Dr Behera said, adding wearable devices were an alternative.

‘We were basically looking for something like a companion or support for ageing populations.

‘The idea is how to help these people when they are alone, to get them some kind of assistance.

‘Monitoring and recognition is still very much in its infancy and we believe Robbie is the first robot to use vision-based recognition to recognise four behaviours; aggressive, depressive, happy and neutral.’

Robbie can detect when a dementia patient is in distress and play music to calm them down, the researchers say. 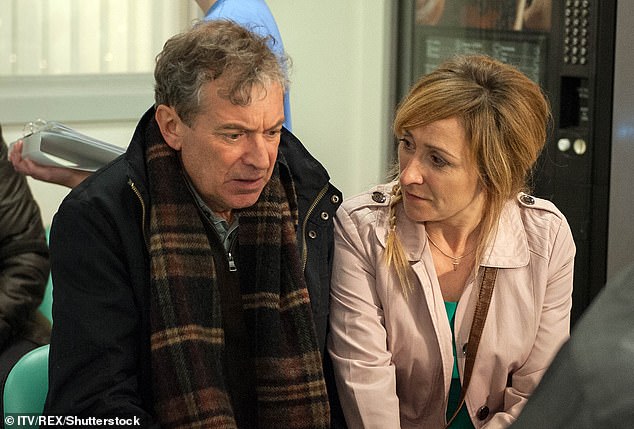 Robbie the Robot learned how to interpret emotions and behaviour of people who have or might have dementia by watching images of Emmerdale character Ashley Thomas (left), who developed the condition 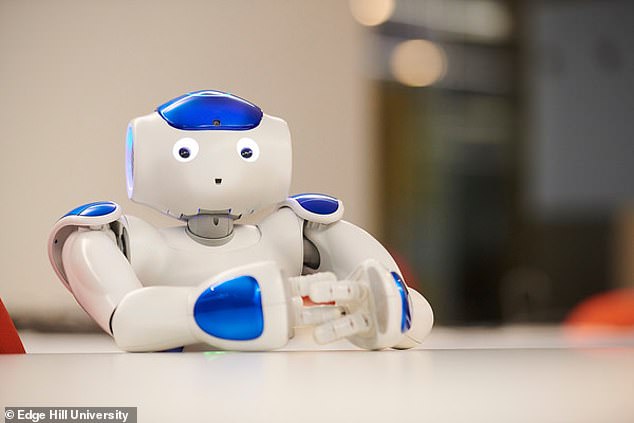 Robbie the Robot can play music to distract a dementia patient in distress, and the scientists hope it will one day help a GP or carer to spot early signs of the condition

It is able to recognise 80 human actions and emotions and they hope it will one day be able to help a GP or carer diagnose dementia.

Dementia is most associated with memory loss and confusion but can also cause changes to someone’s moods or behaviour, difficulty performing simple tasks, struggling with language, and avoiding socialising.

It is most common among over-65s, with it affecting one in six people over the age of 80.

Third-year student Zachary Wharton said: ‘The aim is for Robbie and robots like him to look for clues as to when the person might be beginning to show aggressive behaviour and perhaps offer a distraction to help them calm down.

‘It might be through playing music or showing a video, talking to them.

‘The potential use of robots is huge as they can not only with the daily routine of a sufferer for friends and family but could potentially intervene in situations to help.’

The university created a video explaining how the robot works.