As 2020 kicks off and people continue getting through the stress brought on from the release of ‘Cat’s last year, Universal is hoping that their ‘Dolittle’ film would bring them a bit of redemption into the new year.

But the ‘Doctor Dolittle’ reboot starring Robert Downey Jr’s version of the iconic doctor is being pegged lackluster by reviewers, with many annoyed by both his and the CGI animals’ performances.

The film, directed by Stephen Gaghan, has already even been deemed as ‘the first worst movie of 2020’ ahead of its January 17 release.

‘But if they could speak, no realm of the animal kingdom would have anything good to say about ‘Dolittle”: Critics give their takes on the reboot

Variety immediately called the family film ‘sloppy,’ dubbing the period-set flick as being ‘predictable and obnoxious.’

Defending the lack of connection between the audience and the CGI animals in ‘Dolittle’, Variety stated that the movie would still ‘test audiences’ patience with overly complicated, noisy scenarios.’

‘What should have been an awe-filled adventure quickly curdles into an awful one, thanks to a pedestrian formula and the filmmakers’ fixation on fart jokes,’ the publication added.

Variety continued: ‘Screenwriters Dan Gregor, Doug Mand, and Gaghan, working from a story by Thomas Shepherd, frequently go off-book in order to sketch their refurbished tale, borrowing only a waft of inspiration from the novels’ versions of Dolittle and Stubbins.’ 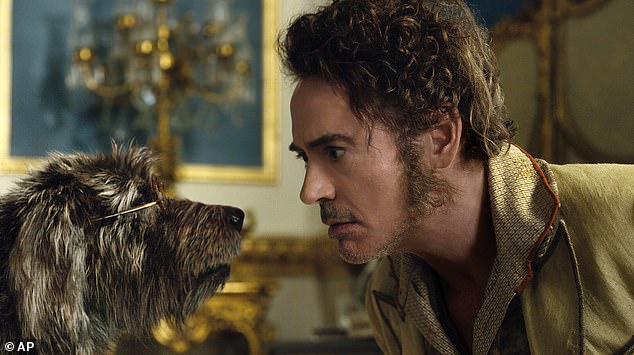 Many have slammed Downey’s performance, stating that he has no personality in the flick

The publication criticized the movie for using its women characters only as fodder to continue the story for the men in the film.

‘Such faintly sexist leanings are slightly forgivable when the narrative is peppered with healthy sentiments about how to handle grief, anxiety, and disability, as well as the values of being vulnerable with each other and kind to animals,’ Variety said. ‘Still, those messages are garbled in execution and lack the proper breathing room to make them impactful on the characters for more than a few seconds when conveniently utilized.

The Associated Press was just as vicious in their critique, slamming the film and comparing it to the other recent epic fail from Universal – ‘Cats’.

”Dolittle’ is a more harmless and whimsical family entertainment, less likely to provoke nightmares than the digitally furred felines of Tom Hooper´s Andrew Lloyd Webber adaptation,’ AP declared. ‘But, just the same, the two films together could be the worst setback for animalia since global warming, or at least ‘Howard the Duck.”

AP was most disappointed in Downey’s performance and claimed his personality ‘doesn’t come through at all’, dubbing him a ‘victim of the surrounding mess or a party to it.’ 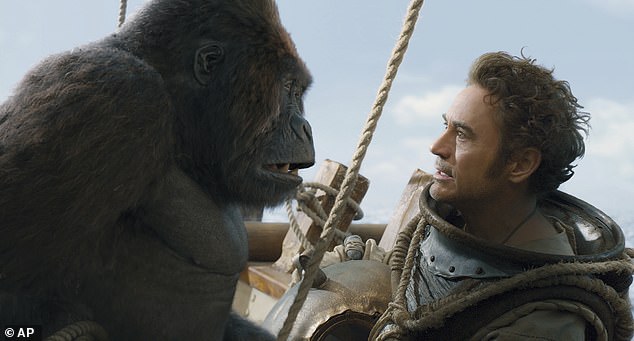 Giving the flick ‘one star out of four,’ AP stressed that the animals in the movie are void of character and rely on ‘increasingly weak jokes, which culminate in a scene revolving around a dragon’s flatulence.’

‘If they could speak, no realm of the animal kingdom – no penguin, parakeet or panda – would have anything good to say about Stephen Gaghan´s ‘Dolittle,’ a big-budget train wreck in which things go so awry that it can´t even be said to be strictly for the dogs,’ they said.

Screen Crush labeled the film as ‘the first worst movie of 2020,’ adding that ‘Dolittle’ is ‘an unpleasant, incoherent mess.’

The site points to film development as part of the issue, noting that Jonathan Libesman was brought in to do 21 days of additional shooting. 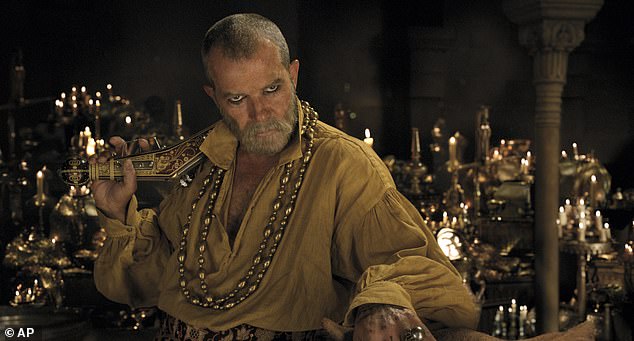 ‘It appears that at a certain point someone in a position of power determined that this movie could not be saved, but it could be shortened,’ they said in the review. ‘And so Dolittle is absolutely relentless; a non-stop 100-minute assault of putrid gags, abysmal stunts, and celebrity vocal cameos.’

‘Any hint of character development — or even recognizable human behavior — has been trimmed out in the hopes of making a film that moves so fast its audience won’t have time to notice how little of it makes any sense, or how often Robert Downey Jr. speaks his dialogue with his back to the camera.

Screen Crush also compared the film to ‘Cats’ – calling the 2019 flick ‘derange’ but ‘something and ‘Dolittle’ a bit of an ‘unpleasant mess.’

‘Dolittle’ was labeled as being ‘anti-cinema’ by Vulture, with the publication adding that it is the type of film that ‘whose incompetence boggles the mind and corrupts the soul.’ 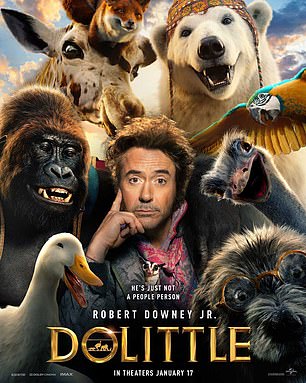 They continued: ‘The problems are manifold, but let’s start with the most tragic one: Downey, a delightfully inventive, generational talent who has been borged into the Marvel machine for the past decade-plus, seems determined to sabotage this movie.’

Vulture continues by slamming the animals in the film, declaring that the voices ‘don’t sound like they’re coming from any part of the film’s physical space.’

The publication added in their review that all they felt that the rewrites and reshooting done for the film did little to help the movie.

‘There is no onscreen evidence that Dolittle, in any iteration, was ever anything but hopelessly inert,’ Vulture continued.

The Guardian claimed to have expected the film to be a ‘howling disaster,’ decrying the film’s ‘refundancy of yet another retelling.’

‘Dolittle’ was deemed a ‘miniscule yet meaninful’ victory for Universal, who were ‘still licking wounds after Cats.’

‘The animals on show here are far less nightmarish although the film is far less memorable and maybe some sick part of me wanted it to be worse – or weirder – just to make it stick out from the pack,’ the publication added.

The Guardian pegged the film’s plot as being ‘convoluted as it is silly.’

‘It’s all very absurd but it’s paced for the attention span of a small child and so mostly resembles a live-action cartoon, lurching from one chaotic set piece to the next, boredom not given the time to start truly setting in,’ they added.

The New York Times declared that it was ‘too bad’ that the movie could not have been ‘ditched’ in its entirety, asking for the film to be ‘dramatically shortened.’

‘Cue the flat jokes, deep ocean dive and awfully long haul. Whales swim by, a dragon grouses, Dolittle’s zoo scurries and cracks wise, and so does Downey,’ they added.

‘No one throws scat or has an accident on the rug, although the live-action Michael Sheen amusingly hogs all his scenes as a Dolittle rival, while Antonio Banderas peacocks through as a pirate king.’

The publication added that the film received a PG rating for ‘mild peril and royal crisis.’