There is no question that it looks regal. From the official picture, it resembles a beige version of the Imperial State Crown — sumptuous, hefty, richly bejewelled and very grand.

And having triumphed in a hard-fought competition under the watchful eye of the Queen’s personal chef, her favourite shop and the Royal Household, it has the royal seal of approval.

But how on earth am I going to make what is now, officially, the Platinum Jubilee Pudding?

It’s a colossal five-storey trifle which serves 20, assuming you get past multiple challenges including making your own jelly, lemon curd, custard, amaretti biscuits, Swiss rolls and something called ‘jewelled chocolate bark’.

However, the Mail has decided that, having just written Her Majesty’s biography, Queen Of Our Times, I am just the person to have a go at making Her Majesty’s pudding. All I can say is that the intricacies of the Abdication crisis or the Heath-era Civil List reforms are a doddle compared to making the ‘chunky mandarin coulis’ that sits in the middle of this calorie-packed fridge-hogger.

The pudding’s original name is ‘Jemma’s Lemon Swiss Roll and Amaretti Trifle’ — the invention of 31-year-old amateur baker, Jemma Melvin, from Southport, Merseyside who was taught to bake by her grandmother.

It was chosen from more than 5,000 entries all vying for the same sort of culinary immortality as Constance Spry’s Coronation Chicken, that eternal summer stalwart devised in 1953.

This time, the Palace wanted a pudding. The judging took place at Fortnum & Mason, the royal grocers-cum-tearooms on London’s Piccadilly.

The task of sifting through all 5,000 submissions fell to head chef Roger Pizey and his staff, whittling it down to a shortlist of 150. At which point the Queen’s chef, Mark Flanagan, and the Household team made the final selection.

Before embarking on my mighty challenge, I drop in for some advice. Roger tells me they went through every single entry on paper, grading them on ingredients, cooking methods, seasonality and impact. ‘It had to be a great summer dish,’ explains Roger, himself an award-winning pastry chef. ‘And the winner was unanimous. It’s sunshine in a bowl.’ 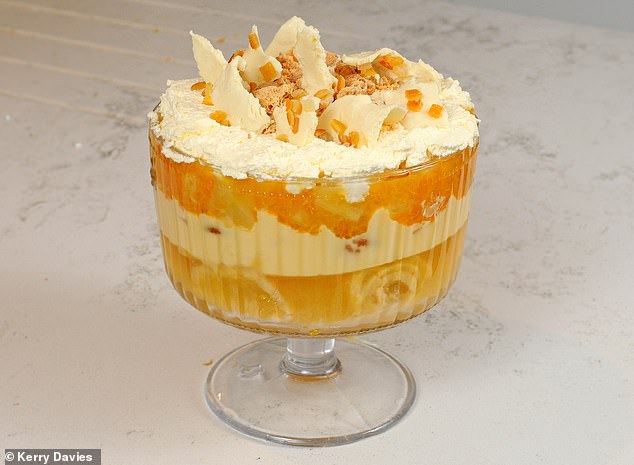 The pudding’s original name is ‘Jemma’s Lemon Swiss Roll and Amaretti Trifle’ — the invention of 31-year-old amateur baker, Jemma Melvin, from Southport, Merseyside who was taught to bake by her grandmother

Fortnum is currently doing a roaring trade in portions of the pudding in its restaurants so I take the opportunity to sample the end product. It’s the perfect sweet, mushy melange of gluttony which a trifle should be, with a citrus tang and a bit of crunch, too.

Back home, I feel like a first-time marathon runner on the start line. I download the recipe card which says: ‘Prep time: over 2 hours. Cook time: 35 minutes.’ I know it’s going to take all day, especially when I spend 20 minutes in the supermarket merely looking for something called arrowroot (top tip to fellow idiots: it’s not in the fruit and veg section). Roger says you can split the exercise into two parts.

The recipe card breaks it down into ten stages. But Jemma helpfully notes that you can ‘simplify’ things (i.e. cheat) by buying one or two components ready-made.

Fortnum has a section selling the lemon curd and the amaretti biscuits, shaving a few hours off. You can also buy your own custard.

But there’s no dodging the bulk of these instructions. To compound the challenge, you need a trifle dish which can hold 3.5 litres. Ours is two thirds that size. I decide to make one grand pudding plus a smaller reserve version on the side just in case I make a complete hash of the main show.

I start by whipping up eggs, sugar and flour to make my Swiss rolls — two flat sponge rectangles which will later be rolled up full of lemon curd. Mine don’t fill the baking tray and emerge like cowpats. No time to fret. I must get on with the ‘St Clement’s Jelly’.

This involves squeezing three oranges and four lemons into the gelatine mix and letting it chill — but not set. While that’s happening, I get cracking on the mandarin coulis. This involves slowly cooking mandarin segments and sugar along with the elusive arrowroot. Then I realise my blunder. The recipe demands four cans of mandarin segments but I have bought the wrong size. I am missing half the requisite chunks and it’s too late for another shop. What to do? Brainwave. This is a pudding not just for the Queen but for the Head of the Commonwealth. In the larder, I find a long-forgotten tin of pineapple chunks, and so I tip the whole lot in the mix.

Now it’s Swiss roll time. I unroll my cowpats and smother them with lemon curd before rolling them up again. The recipe says to cut them into slices and arrange them upright round the base of the bowl, using the rest to fill the middle. They look vaguely roll-like, though the Swiss might complain.Then comes the jelly. Roger Pizey’s top tip is to ensure the jelly is not too liquid or else it will swamp the sponge layer. Oops. When I pour it in, the rolls start floating.

‘That looks simply disgusting,’ my wife observes during a quick dash into the kitchen. 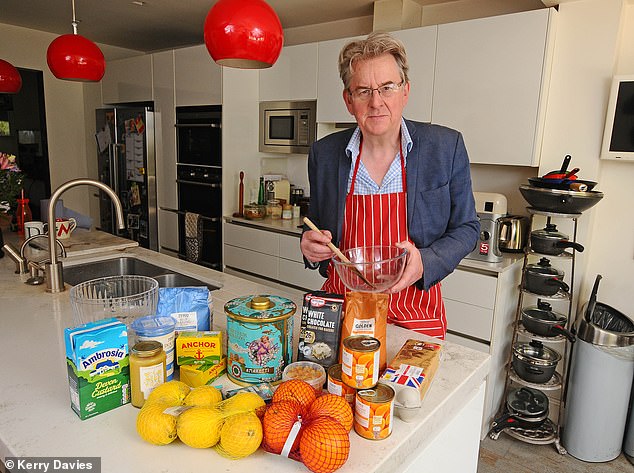 I start by whipping up eggs, sugar and flour to make my Swiss rolls — two flat sponge rectangles which will later be rolled up full of lemon curd. Mine don’t fill the baking tray and emerge like cowpats. No time to fret. I must get on with the ‘St Clement’s Jelly’

It’s time to stick the whole lot in the fridge to set while I get cracking on the ‘jewelled chocolate bark’. You are supposed to melt two bars of white chocolate and tip it all out over a baking tray and sprinkle with mixed fruit peel. In my case, the chocolate comes out gloopy and I have to flatten it on to the tray first.

At least, Part One is done. I leave the whole lot to set and tackle the mountain of washing up.

Several hours later, I return to assemble the pudding. The big bowl emerges from the fridge looking as unappetising as before. But it brightens up when I pour on the layer of custard.

Next come the amaretti biscuits. Easy enough. It’s now time for the mandarin coulis which certainly adds colour, although I would not go quite as far as Roger’s promise of ‘sunshine in a bowl’.

One more layer to come. I have to whip up a pint and a half of double cream. I turn up the dial on the mixer, leave it too long and seriously overdo the whipping. The cream ends up like thick butter. You are supposed to ‘spoon’ it smoothly over the top. This is more of a ‘splatter’. 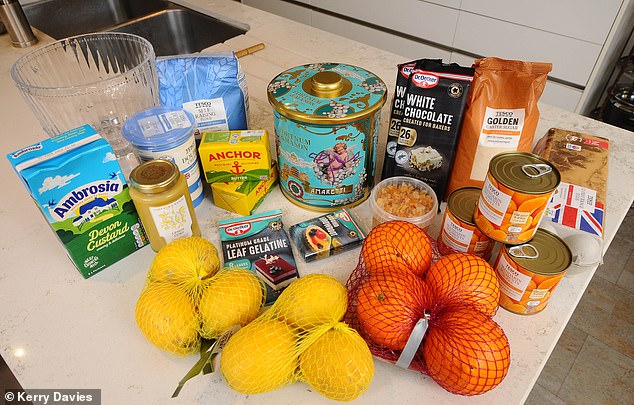 Last of all come the crown jewels in the form of the ‘chocolate bark’.

‘Break into shards’, say the instructions. Except my chocolate does not form shards. Or break. It’s a gluey, floppy mess. I tear off a few pieces and try to get them to stand on top but they droop. Chocolate fungi rather than ‘bark’.

My plan is to serve this thing at the weekend but I plunge a furtive spoon in at the edge for a taste. My verdict: OK, it is a bit sloppy in every sense but perfectly edible.

At which point my youngest returns home from school. I await an honest, objective opinion.

‘What the hell’s that?’ is his first reaction. ‘I hope you don’t expect me to touch it. Because I won’t.’