Robert Quinn is placed on IR by Eagles as pass-rusher ‘will have knee scope this week’, setting him up to miss at least the next FOUR games for NFL leaders

Robert Quinn was placed on the injured reserve list Tuesday by the Eagles, the team announced, as he battles knee problems that will sideline him for the next month.

The news came after a report from NFL Network said he’d be undergoing a knee scope procedure this week, after it ‘got twisted’ in practice last week.

He missed last week’s game vs. the Titans, and the IR designation means he’ll miss at least the next four games as well.

Quinn joined the Eagles from the Bears on October 26 when Philadelphia acquired him for a fourth-round pick.

In five games, the three-time Pro Bowler has yet to make a sack and has just two tackles.

The Eagles have been tremendous both with and without Quinn this season, as they lead the league with an 11-1 record. 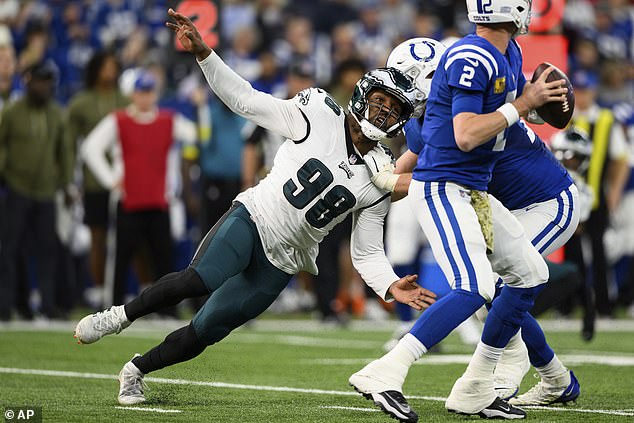 Quinn has yet to notch a sack in an Eagles uniform, in five games there thus far

With the postseason in the team’s future, the 32-year-old’s year is not necessarily over.

If he misses exactly four games, he’d return for the regular season finale in Week 18 vs. the Giants.

And that scenario seems in play as NFL Network said there’s ‘optimism he’s back for the playoff push.’